On November 1, 1949, The Dartmouth, the radio station WDBS, the Dartmouth Christian Union, the Dartmouth Human Rights Society, and the National Student Association Council (NSAC) sponsored a campus-wide poll to record sentiment on the issue of discriminatory clauses. Eighty percent of the student body responded to the poll, and of the 2359 votes, 1754 students said they were in favor of removing the clauses, 375 voted in favor of maintaining the clauses, and 230 were undecided.

While the poll prompted no formal action in itself, the Dartmouth IFC sent letters to the national headquarters of Dartmouth fraternity chapters containing restrictive clauses in their constitutions in response to the polling results on November 17, 1949. They wrote, “the [Dartmouth] IFC would favor elimination of these clauses at the forthcoming National Interfraternity Conference... It is the belief of the IFC that such restrictive clauses as they exist today in many fraternity charters foster a negative influence which is in direct contradiction of current democratic thought as well as the educational ideals of Dartmouth College... We strongly feel that the matter of admission into a fraternity at Dartmouth should be on the basis of individual choice, both on the part of the individual, and of the fraternity.”

Following their letter to nationals, the IFC with The Dartmouth, the Undergraduate Council (UGC), and the NSCA appointed a committee whose sole purpose was to form plans to combat fraternity discrimination. On January 17, 1950, the committee proposed a plan to hold a student referendum. The original idea for the referendum was to ask each student if they approved of the following proposal: “By April 1, 1952, the undergraduate council would withdraw IFC participation from any fraternity chapter containing in their constitution, a clause that excluded men based on race, religion, or national origin.” The UGC reviewed the referendum and added two proposal options: 2) the council would withdraw recognition of any fraternity at the end of a given year if they had not made every possible effort short of disaffiliation from their national organization to eliminate discriminatory clauses and 3) the college would take no action at all. The referendum was held on March 1, 1950, and the second option passed after receiving 2487 affirmative votes from 2760 voters, which was approximately 90 percent of the student body. The first option received 885 affirmative votes, and the third option received 285 affirmative votes.

The Committee on Review of Discriminatory Clauses required Dartmouth fraternity chapters to poll their alumni and write personal letters to other chapters for their views on the issue after the first referendum. By the end of the first year, two fraternity chapters, Sigma Nu and Phi Delta Theta, were found to have violated the terms of the proposal. The committee recommended that the Board of Trustees should ban the two chapters from IFC activities, but the Trustees defeated this recommendation by a vote of 29-10 and decided to merely give the chapters a warning.

At the end of the following year, on April 24, 1952, Theta Chi was also found to have failed the requirements of the referendum, and the committee similarly recommended that they be be banned from IFC activities for a full year. While the IFC admitted Theta Chi was in the wrong, they opposed the recommendation on the basis that they felt the punishment “would do more harm than good.” The committee then altered their recommendation to a ban of one semester, which was approved at a vote of 24-11. The same night they received news of their semester ban, the brothers of Theta Chi voted to derecognize the Caucasian clause in their constitution. Two months later, the Theta Chi National expelled the Dartmouth chapter due to what they described as a “unilateral action.” The chapter went local with the new name Alpha Theta and received admission into the IFC as a new fraternity. Alumni of the Dartmouth Theta Chi chapter largely supported the decision to derecognize the clause. President Dickey was a member of Theta Chi while he was a Dartmouth student, and alumni wrote him to say they were proud of their chapter for taking a stand. However, Theta Chi had lifetime membership, and some Dartmouth alumni resigned from the fraternity due to the national expulsion of Dartmouth’s chapter. 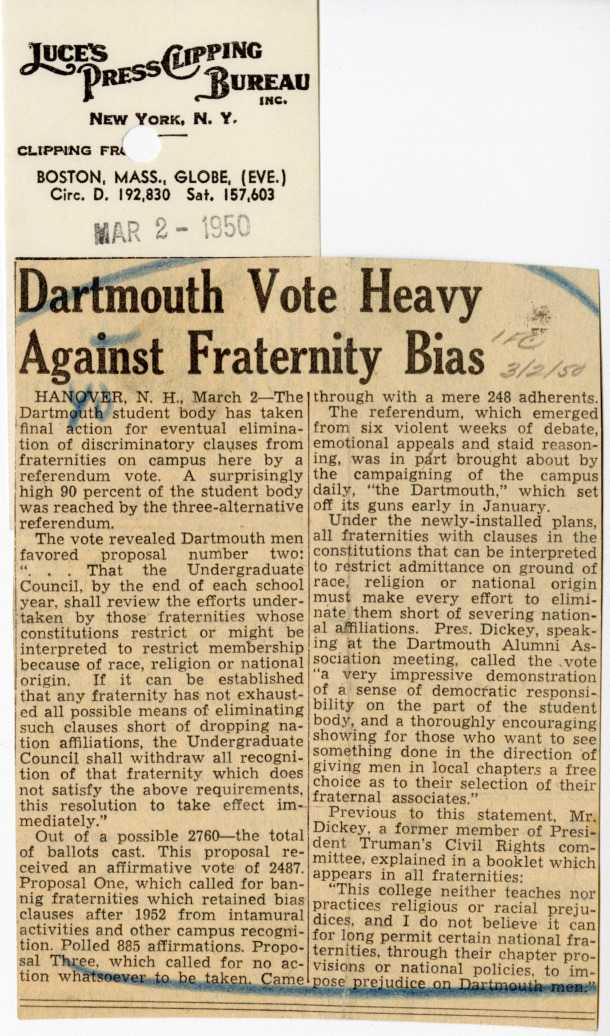 March 2, 1950 Boston Globe article revealing the makeup of votes in the 1950 student referendum. 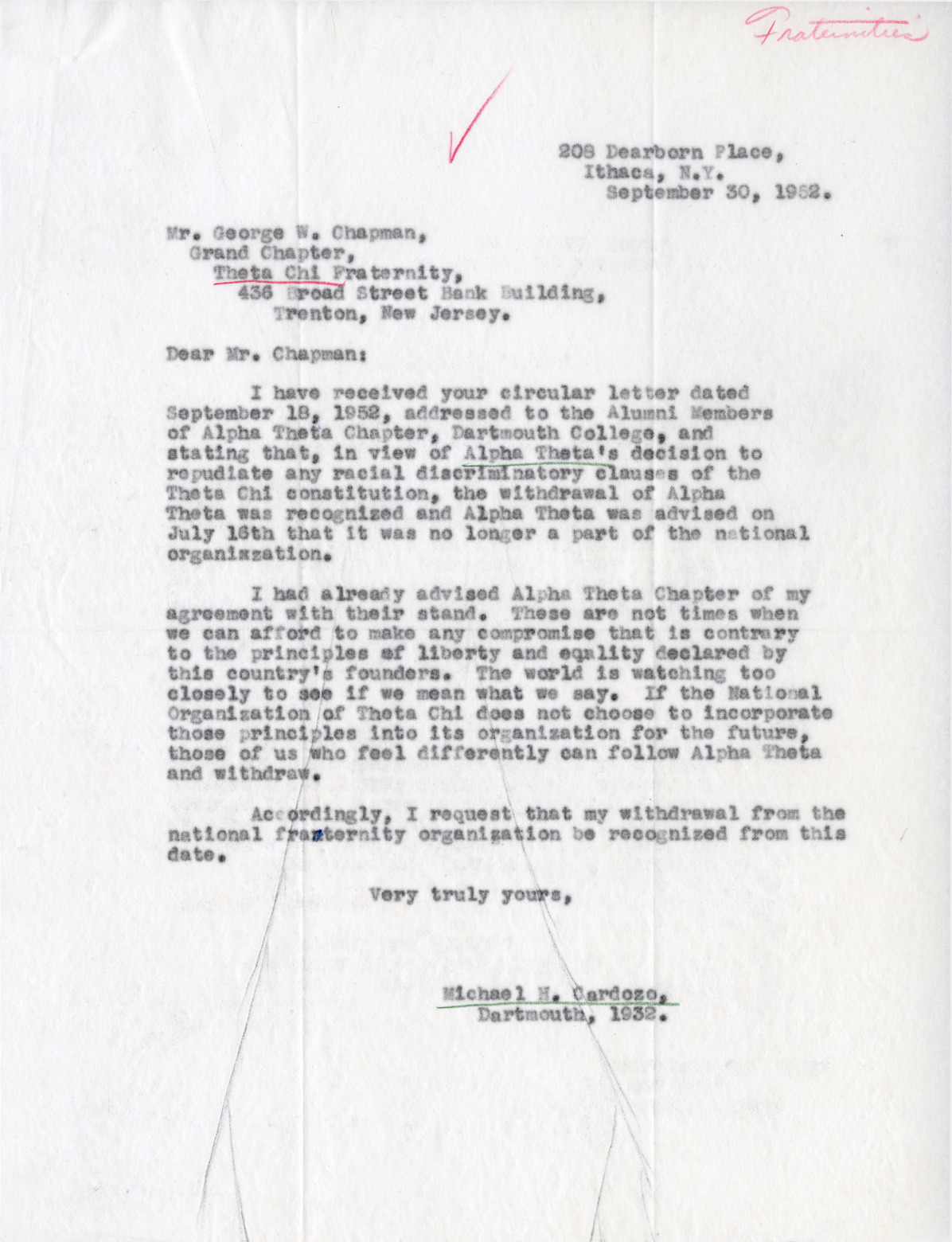 Michael Cardozo '32 resigns from Theta Chi after the national fraternity expelled the Dartmouth chapter over the dereocognition of their discriminatory membership clause. 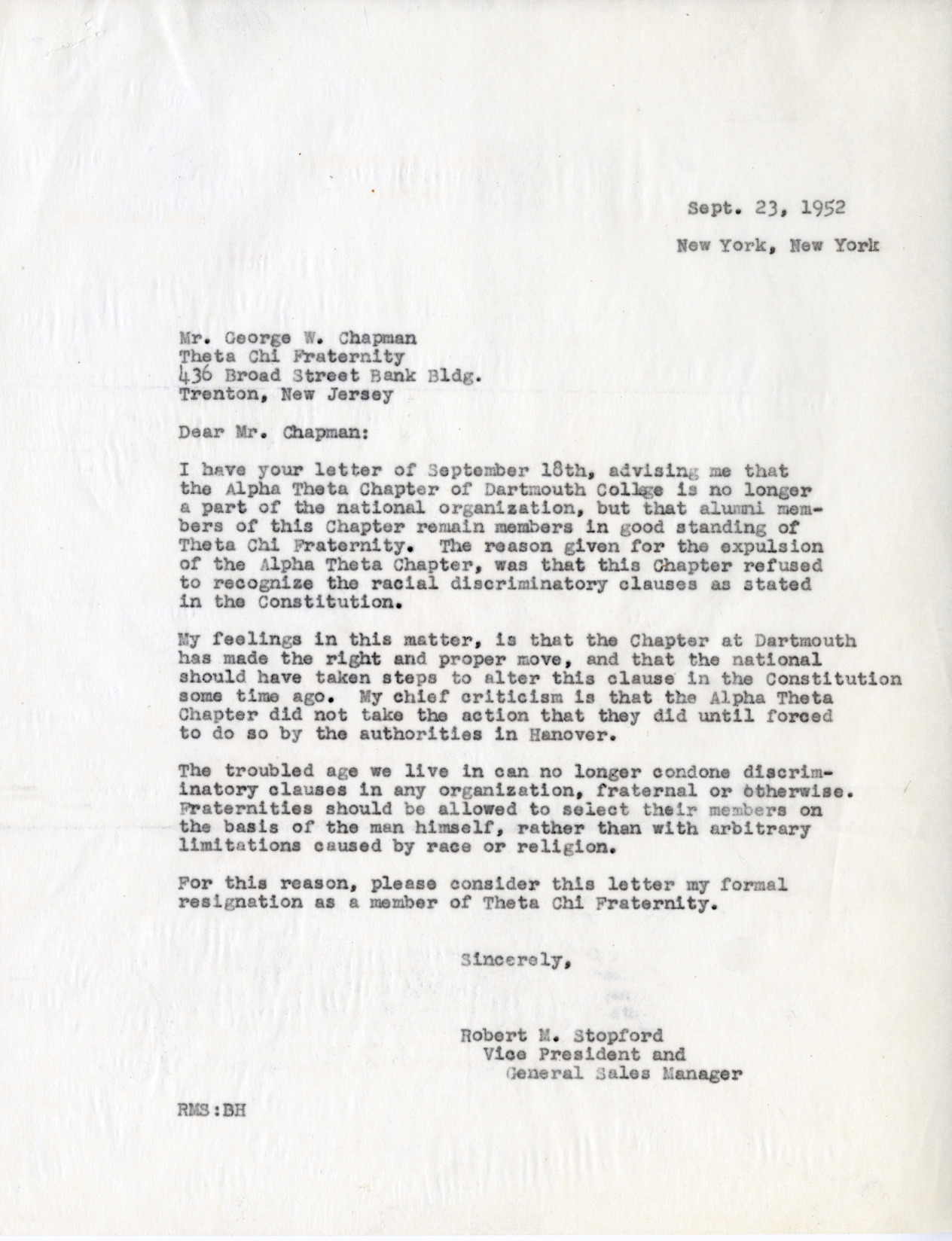 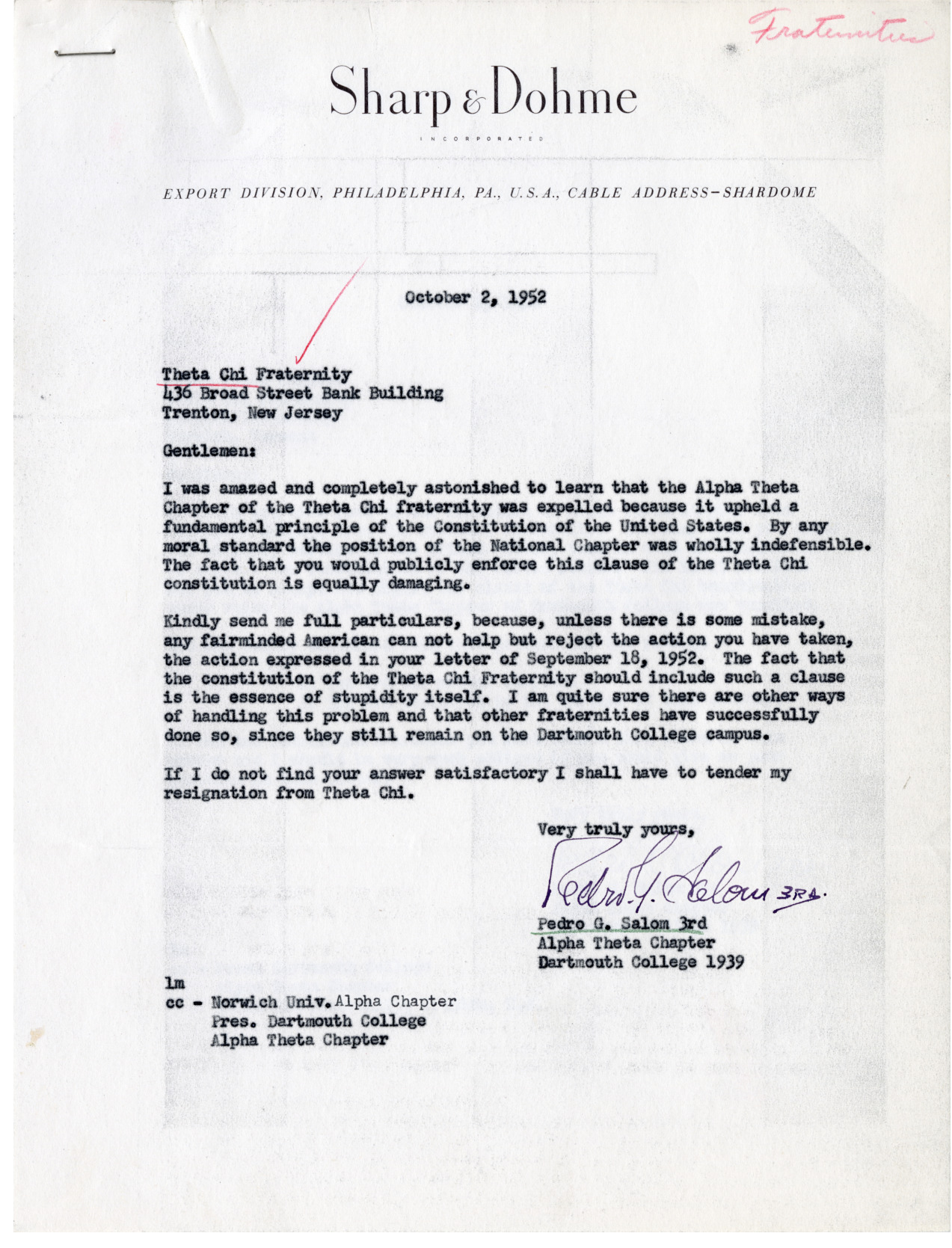 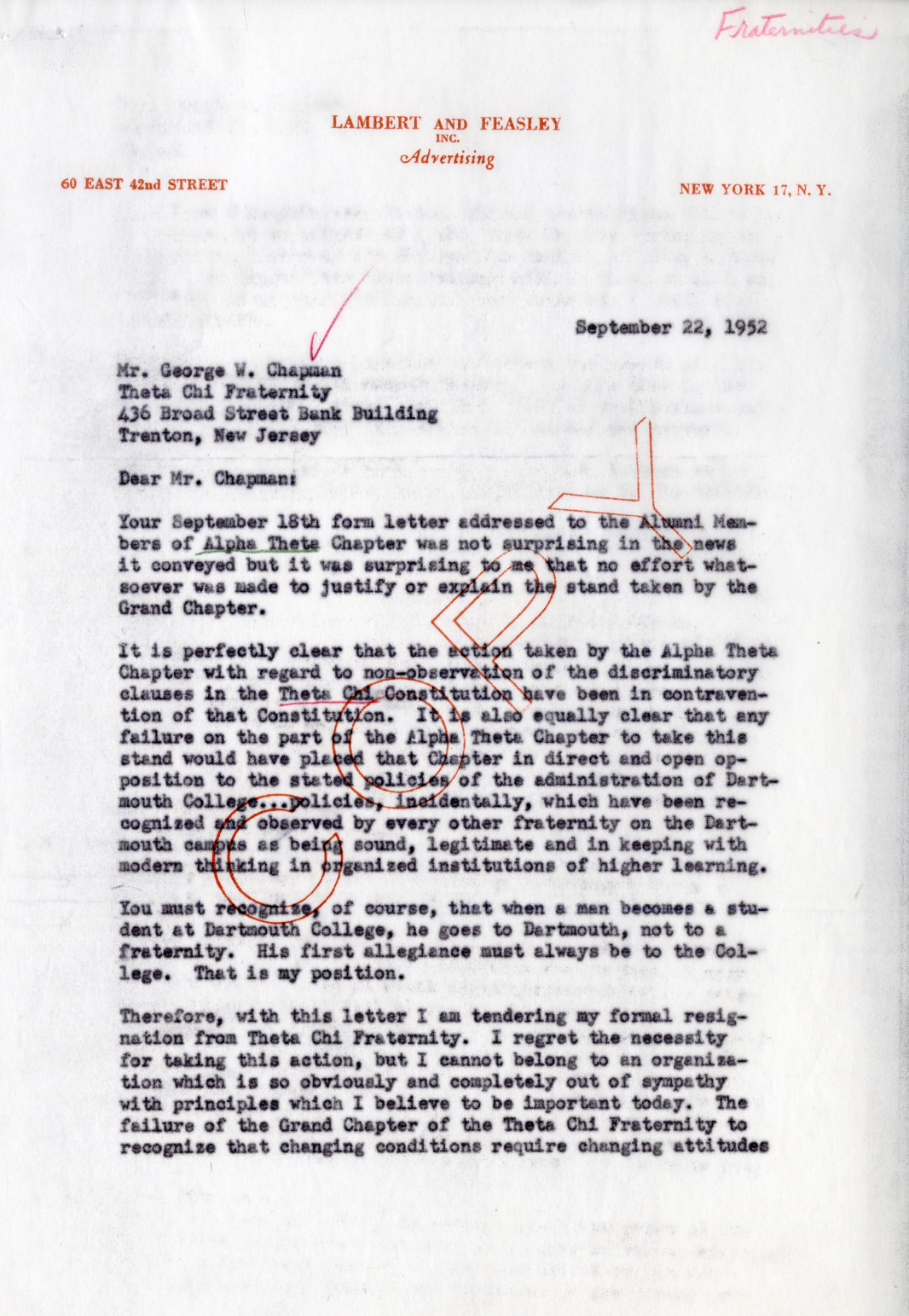 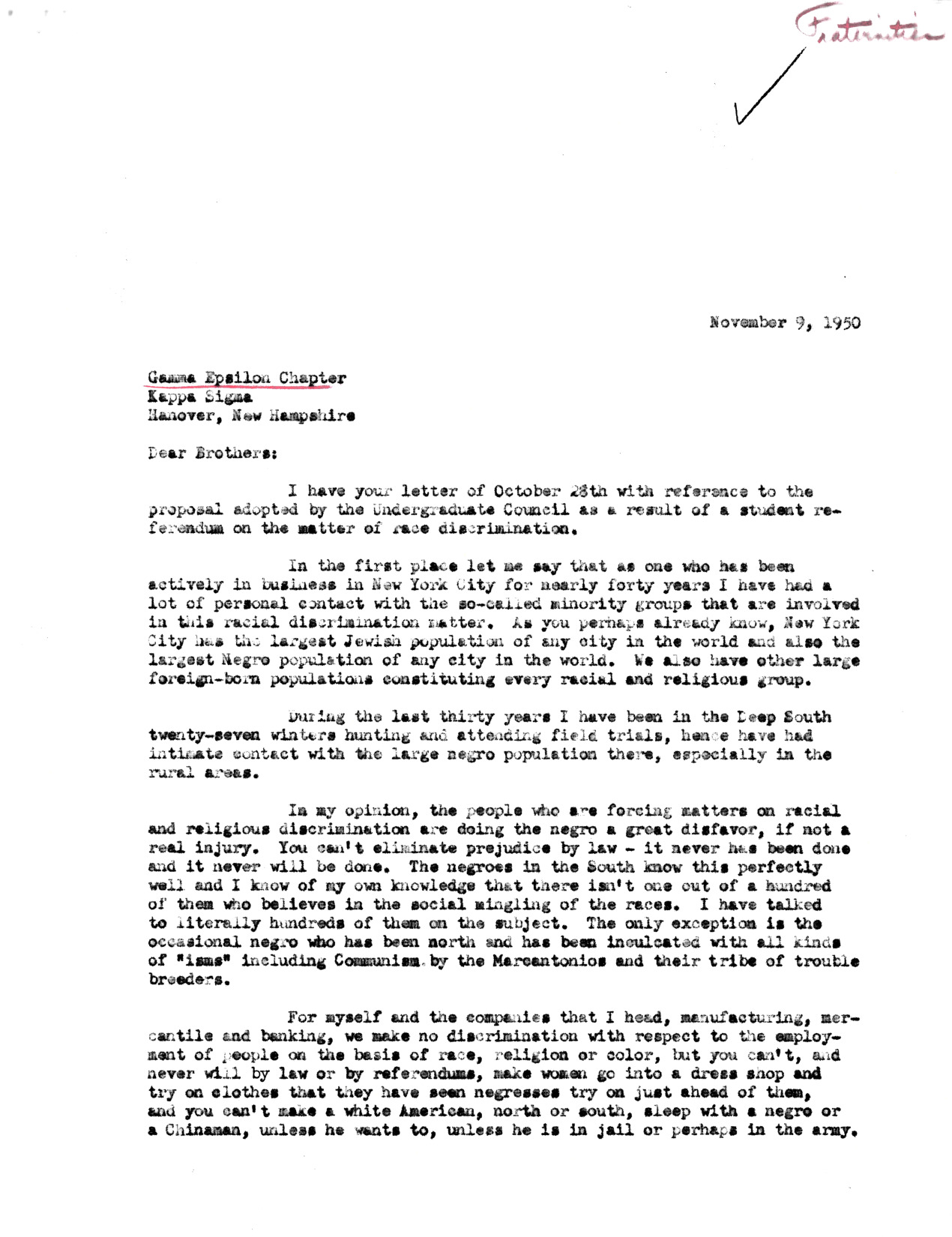 The 1950 student referendum drew ire from some alumni of Dartmouth. In this letter, W. Lee White '12 addresses his fraternity and President Dickey to express his opinion on the 1950 referendum.