Alpha Theta was the first Dartmouth fraternity to publicly derecognize their discriminatory clause and go local, and others would follow. By 1954, some students felt that the 1950 referendum was not yielding the desired results of fully eliminating discriminatory clauses from their fraternities, so the UGC drafted a new referendum. This referendum contained three options: 1) the college would implement a strict deadline by which fraternities had to eliminate their clauses or they would be removed from campus; 2) Dartmouth would maintain the annual review system and withdraw IFC recognition of any chapter if they had not made every possible effort short of disaffiliation from their national organization to eliminate discriminatory clauses; and 3) the college would cease all action aimed towards removing the clauses.

The students voted to enact the first proposal and set a deadline of April 1, 1960 by a vote of 1128. The second option received 848 votes, and the third option received 272. Then president of the UGC, future Dartmouth President David McLaughlin, sent the results of the referendum to President Dickey, who presented the proposal to the Board of Trustees. On May 6, 1954, the proposal became official college policy through the Board. Shortly thereafter, the Discrimination Committee was established as a joint IFC-UGC group, tasked with investigating the status of each fraternity and making recommendations to the Board of Trustees for removing chapters from Dartmouth. At the time of the 1954 referendum, nine fraternity chapters still contained discriminatory membership clauses.

Between the 1954 referendum and the 1960 deadline, fraternity discrimination on campus continued. One such instance of discrimination occurred after Raymond Johnson ’59, an African American student, pledged Delta Upsilon in 1956. While Delta Upsilon did not contain a discriminatory membership clause, they utilized the blackball system. In fraternity pledging, the blackball is a device used by some chapters in which members can prevent students from pledging without deliberation. The current or former brother can place a blackball on a pledges name, without stating a reason why, and the student is forbidden from pledging. This system was not specifically created to be used in a discriminatory manner, but it was occasionally used as such. Five Dartmouth Delta Upsilon alumni submitted a blackball to prevent Johnson from pledging the chapter.

Shockingly, the Dartmouth chapter did not remove Johnson from their pledge class. They decided to postpone the initiation of the entire pledge class while attempting to persuade the five alumni to remove their blackballs. The president of the chapter, Tom Herlihy, said, “[Johnson] was one of the people we wanted in the fraternity, so we fought for him because we had to... It turns out that we did the right thing early in the long struggle against discrimination.” After six months of meetings, Johnson and the rest of his pledge class were successfully initiated into the Delta Upsilon fraternity on April 23, 1957, after all five alumni recalled their blackball. Of the 160 alumni members questioned, 141 approved of Johnson’s membership, 15 disapproved, and 4 did not offer their opinion. Furthermore, the majority of the 69 national chapters of Delta Upsilon did not oppose Johnson’s initiation. Herlihy added the chapter was prepared and had planned to go local if the blackballs were not removed and Johnson could not pledge. 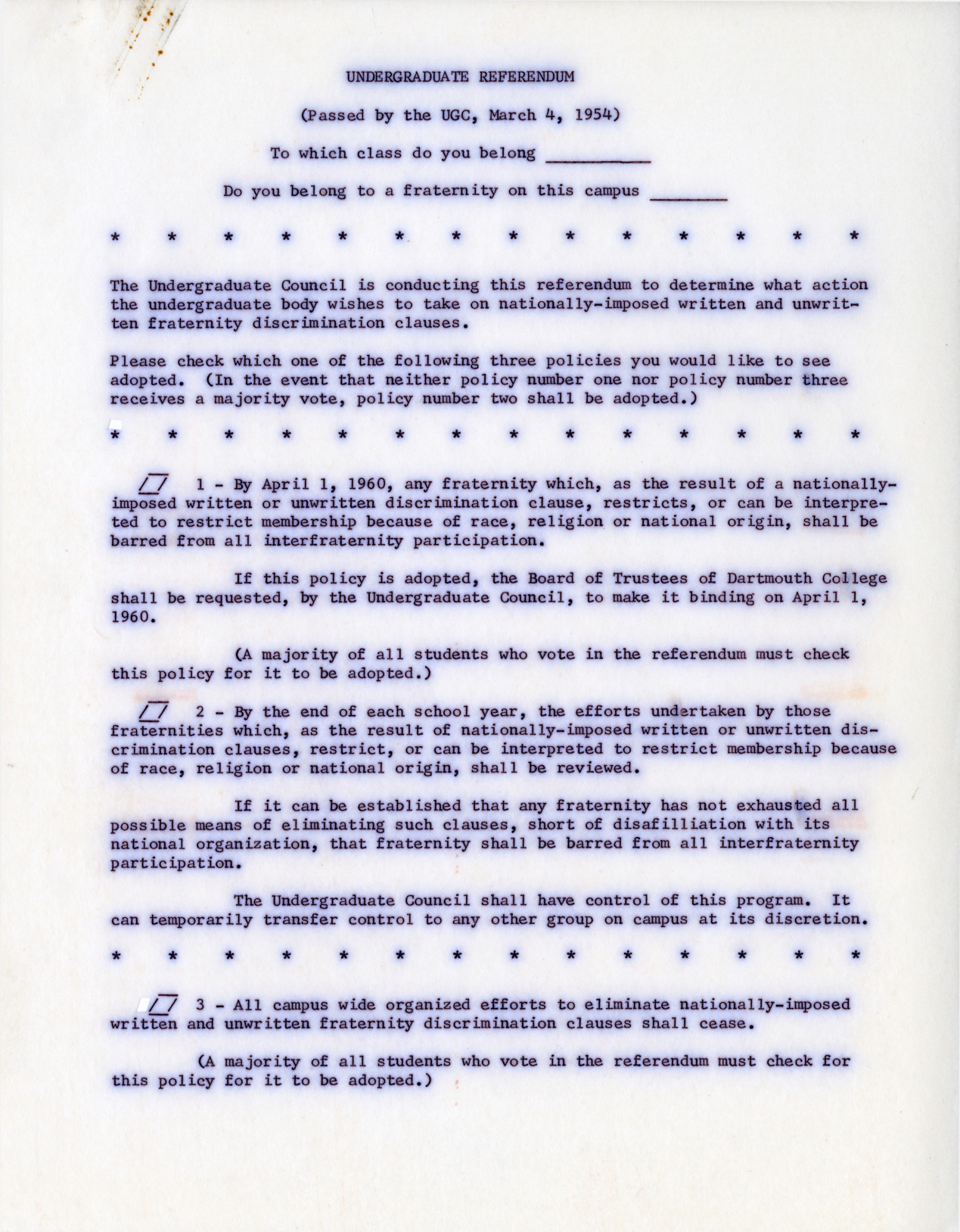 Copy of the 1954 Student Referendum Ballot. 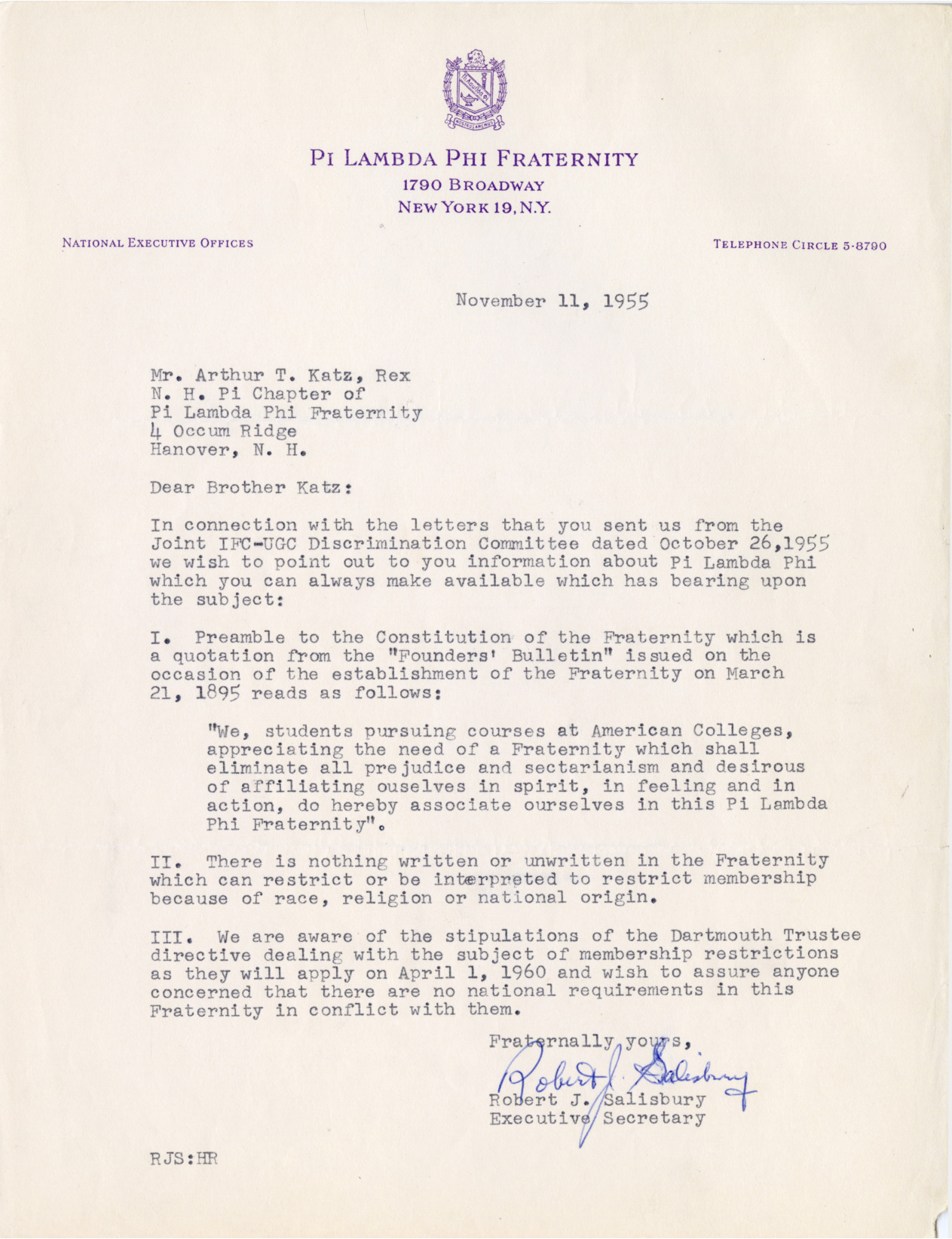 In 1955, every national fraternity on campus distributed a letter to their national headquarters, asking an executive officer of the fraternity to certify their chapter meeting the requirements of the 1954 referendum. This letter is an example of Pi Lambda Phi national's response. 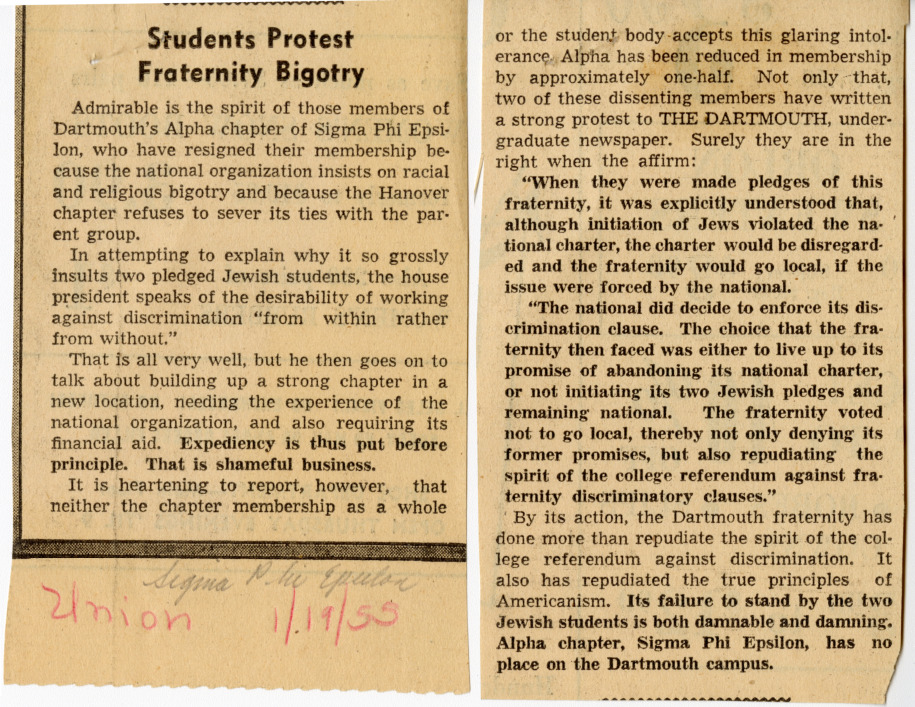 A Manchester Union article detailing the resignation of some Sigma Phi Epsilon's members in protest of the chapters decision to remove two jewish students from their pledge class. 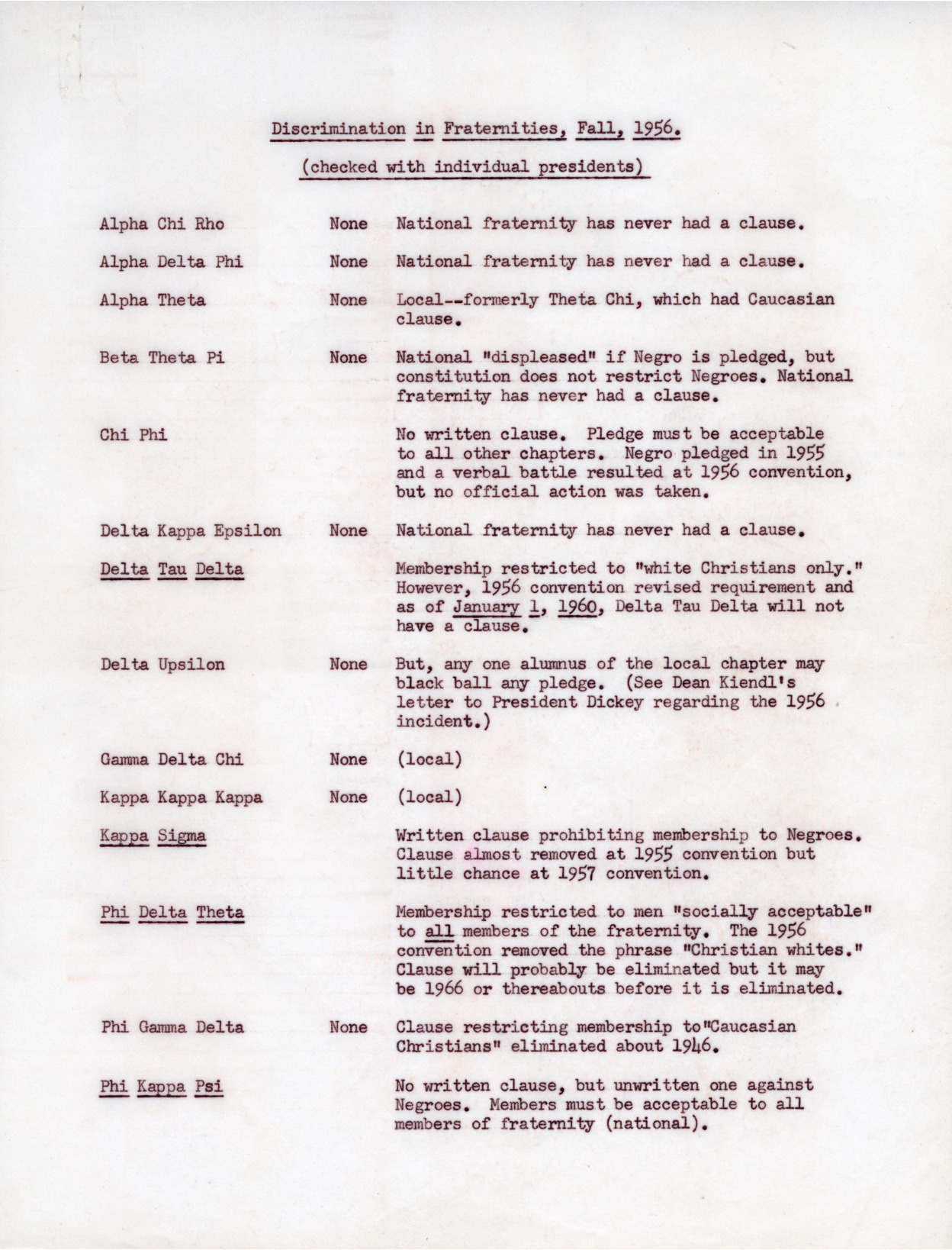 A document listing each fraternity chapter on campus in 1956 and if they contain a discriminatory membership clause. 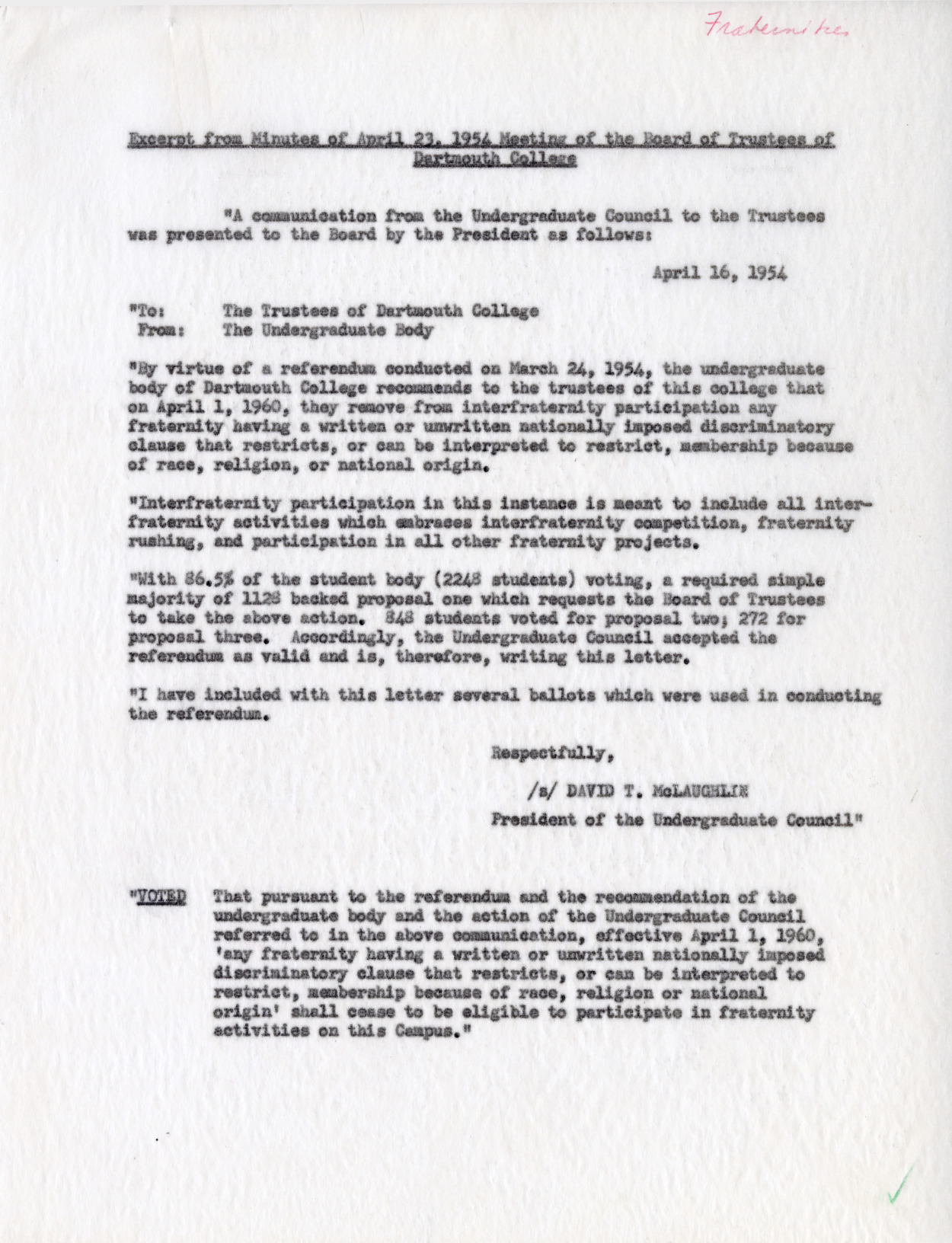 The recommendation to adopt the victorious proposal from the 1954 referendum, given by Undergraduate Council president David McLaughlin to President Dickey, who in turn presented the proposal to the Trustees. 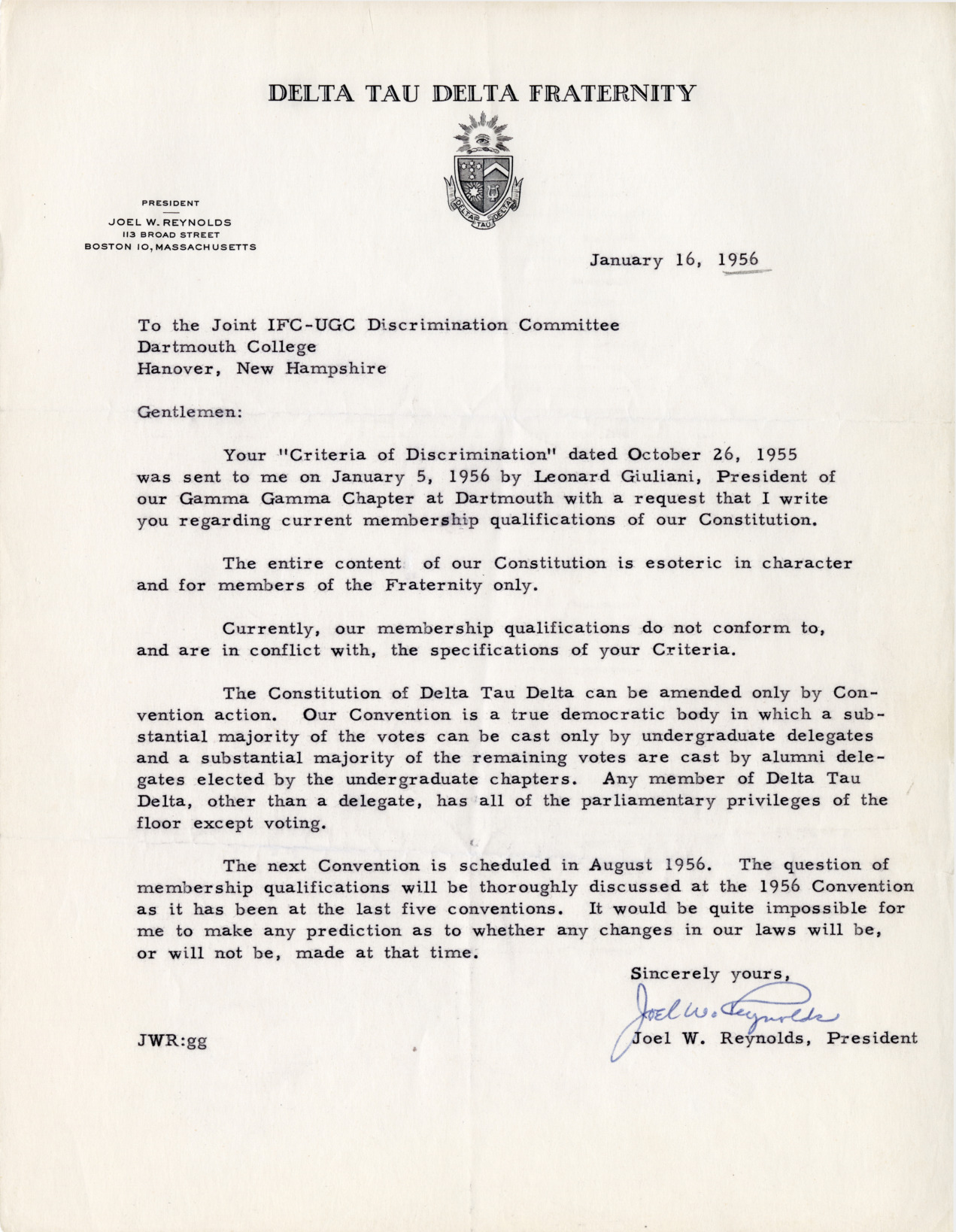 Letter from the national president of Delta Tau Delta, stating the Dartmouth chapter does not conform to the requirements of the 1954 referendum.

In this letter, the national president of Delta Upsilon claims the fraternity does not contain any form of discrimination in its membership policies. However, less than a year after this letter was drafted, a discriminatory blackball incident occurred in the Dartmouth chapter. 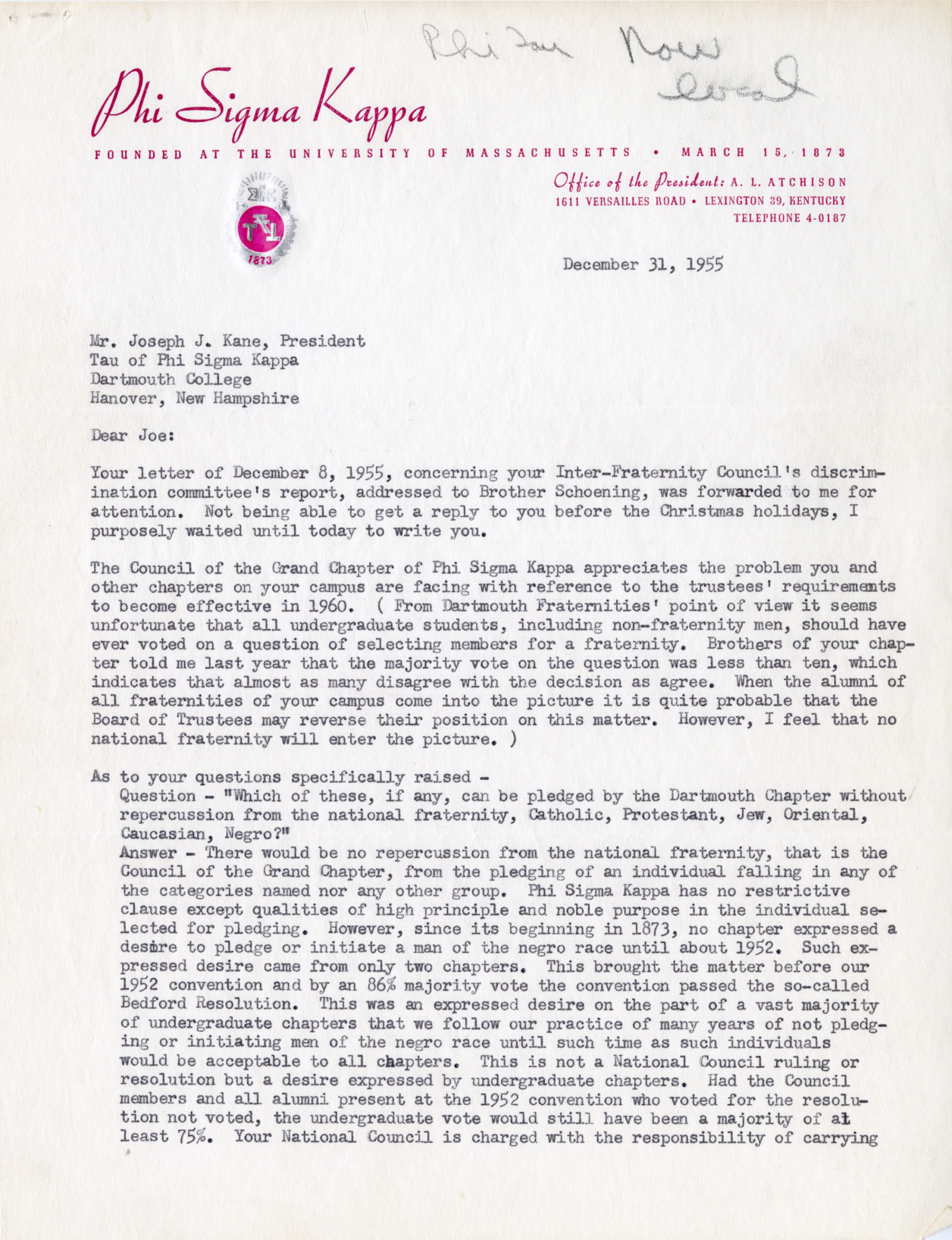 In this response letter, the national president of Phi Sigma Kappa explains the fraternity passed a resolution in 1952 preventing Black or African American pledges. The resolution was not adopted as official policy, but the President says any violation of the resoltion would be unfavorable. 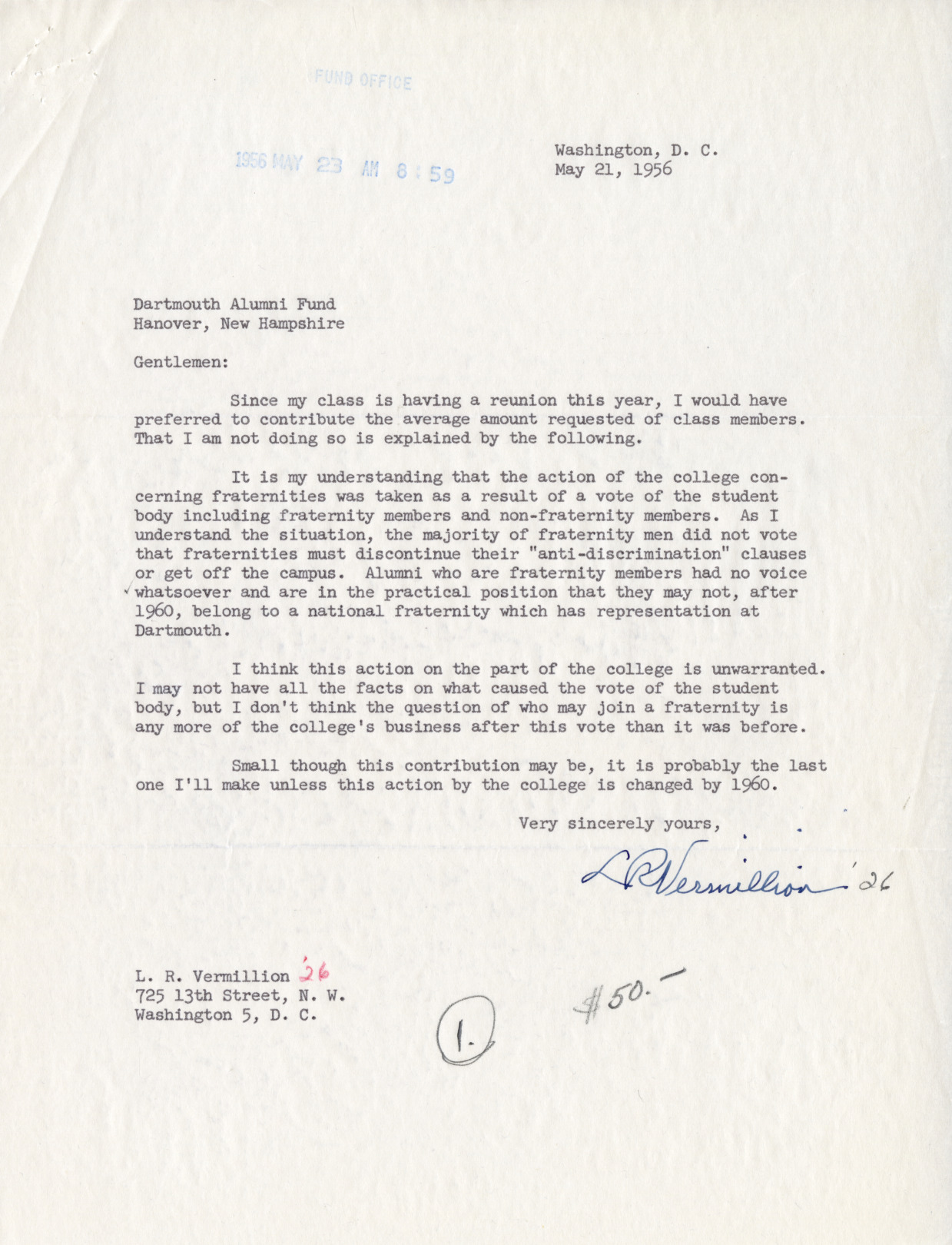 Similar to the 1950 referendum, the 1954 referendum received criticism from Dartmouth alumni. In this letter, Lawrence Vermillion explains he will contribute a below-average sum to his class alumni fund due to the student referendum.