Seven fraternity chapters were in danger of failing to remove their discriminatory clauses by the April 1 deadline. Beta Theta Pi, Phi Delta Theta, and Sigma Alpha Epsilon narrowly avoided the deadline and were able to remain on campus. Beta Theta Pi’s national initially refused to sign a letter saying there was “no discriminatory statement in the ritual or any other document of Beta,” claiming the letter was “undemocratic and unethical.” Instead, Beta Theta Pi’s national submitted a substitute letter which was accepted by the committee and the Board of Trustees, which allowed the chapter to remain at Dartmouth.

In January 1960, Phi Delta Theta’s national said it would be impossible for the Dartmouth chapter to meet the requirements of the referendum because a motion to eliminate the discriminatory clauses was defeated at their last national convention. Phi Delta Theta therefore voted to derecognize their clause and go local. When their national revoked their charter on January 13, 1960, the chapter adopted the new name Phi Delta Alpha to remain on campus.

Sigma Alpha Epsilon contained a socially acceptable clause which carried the potential to be utilized in a discriminatory manner. Similar to Beta Theta Pi, Sigma Alpha Epsilon’s national did not sign a letter stating their membership policies were free of discrimination, claiming the letter was “too broadly phrased to be answered with conviction.” They sent an alternate letter reinforcing the fact that the socially acceptable clause had never been used for discriminatory purposes, which was accepted by the Discrimination Committee and the Board of Trustees “under close surveillance” by the April 1 deadline. 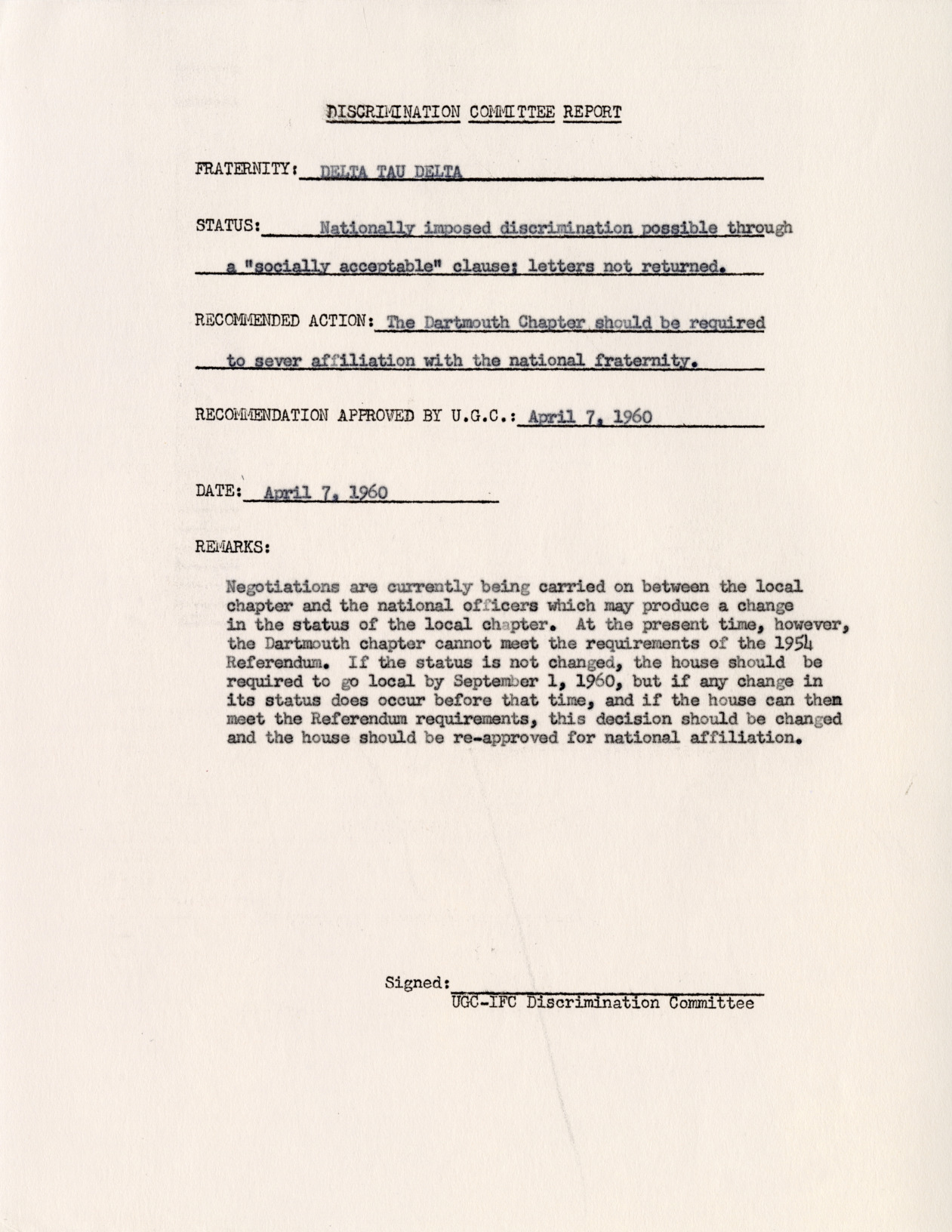 This document showcases the Discrimination Committee's final report on Delta Tau Delta at the April 1, 1960 deadline. Each fraternity chapter on campus was given a report.

Four fraternities failed to remove their discriminatory membership clauses at the deadline: Delta Tau Delta, Phi Gamma Delta, Sigma Nu, and Sigma Chi. However, they all remained on campus the following year despite missing the deadline. Delta Tau Delta disaffiliated from their national on May 17, 1960, renaming themselves Bones Gate. Phi Gamma Delta’s national waived its discriminatory clauses “on campuses where a conflicting policy was in effect” sometime in 1960, allowing the Dartmouth chapter to remain affiliated while being recognized by Dartmouth.  During the summer of 1960, the Sigma Nu national established a procedure of waiving membership qualifications for certain chapters, but they did not offer this waiver to the Dartmouth chapter. On May 5, 1960, the Dartmouth chapter of Sigma Nu was suspended by the national over Dartmouth’s policies, and the chapter went local as Sigma Nu Delta. Their clause, Chapter VIII, Section 7, Part 4, Section 4, Article 1 stated members had to be: “free born and of free ancestry, and without negro blood.”  Sigma Chi disaffiliated with its national on April 20, 1960, assuming the name of The Tabard.

At the beginning of the 1960-61 academic year, every fraternity on Dartmouth’s campus was free to pledge any student at the college, however, fraternity discrimination continued into the 1960s. In 1961, a story came out on Beta Theta Pi, saying their “national was taking action at Williams College making it difficult for them to pledge a negro.”  The national claimed the reason for their action was in response to a policy at Williams College, but the Dartmouth chapter of Beta Theta Pi discontinued their national affiliation after hearing of the incident, noting discrimination was still evident in the national fraternity. However, this action was short-lived, as the chapter re-affiliated around a year later. 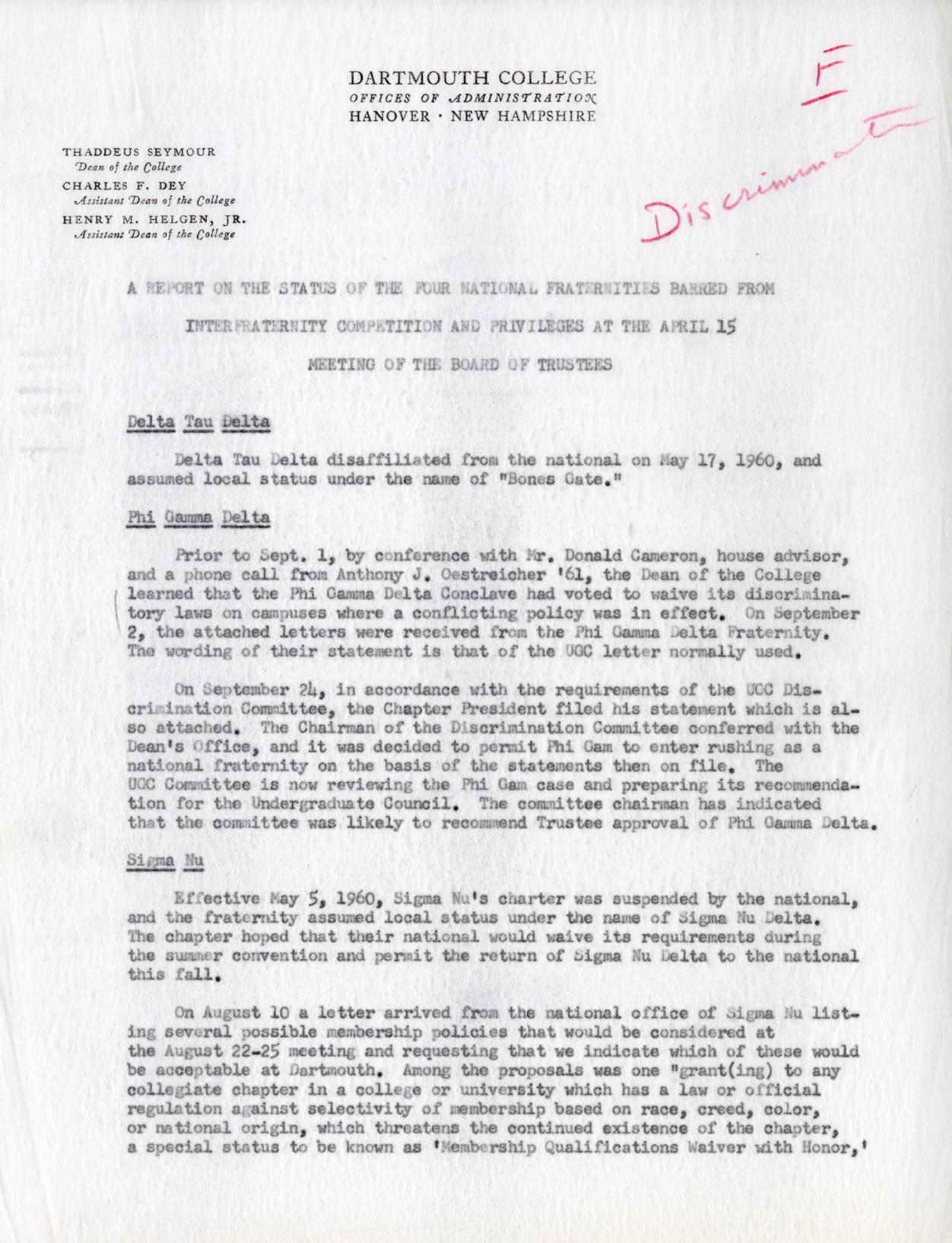 This memo from Stewart Sanders, Assistant to Dean Thaddeus Seymour, details the status of the four fraternities who failed to meet the requirements of the 1954 referendum at the April 1, 1960 deadline. 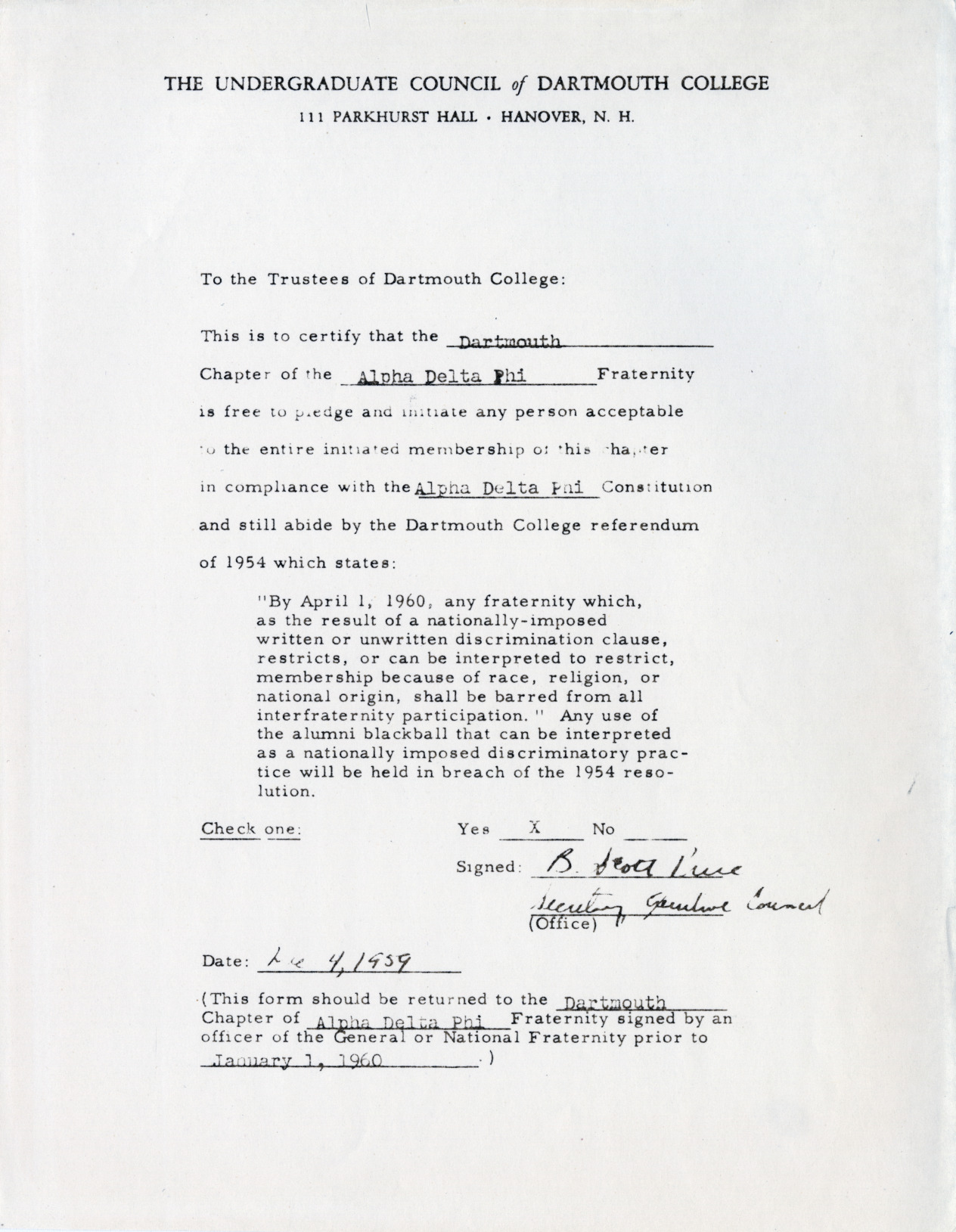 A document to certify a chapter was free of discriminatory membership clauses was distributed to every fraternity on Dartmouth's campus to be signed by a member of their executive or national council. The document pictured is signed by the secretary of Alpha Delta Phi's executive council. 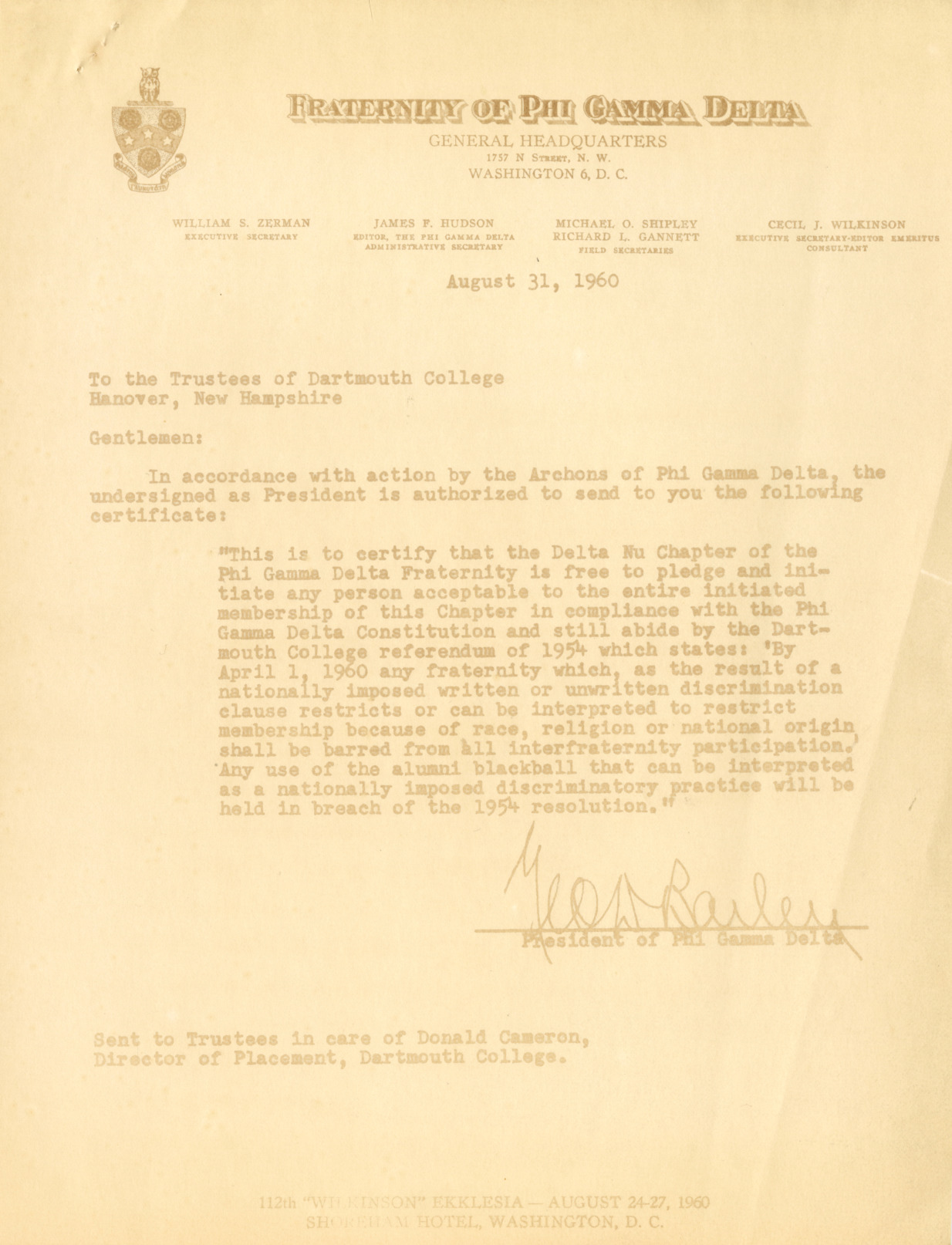 In the summer following the Arpil 1, 1960 deadline, Phi Gamma Delta removed their discriminatory membership clause from the Dartmouth chapter to allow the fraternity to remain on campus with national affiliation. 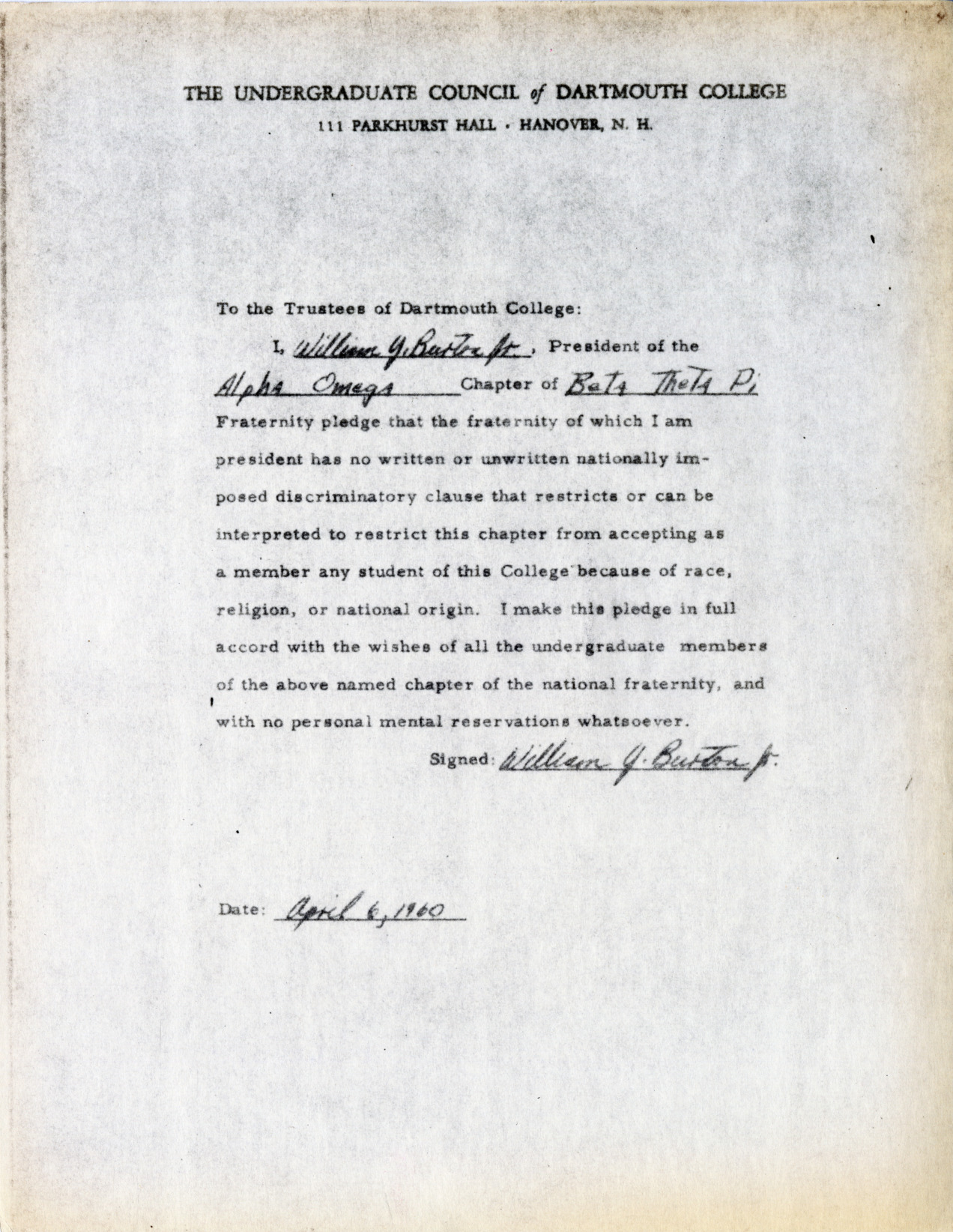 Similar to the document signed by a national or an executive officer, every fraternity was sent a document to be signed by the undergraduate president to certfy that their fraternity did not contain a discriminatory membership clause. Beta Theta Pi is pictured as an example. 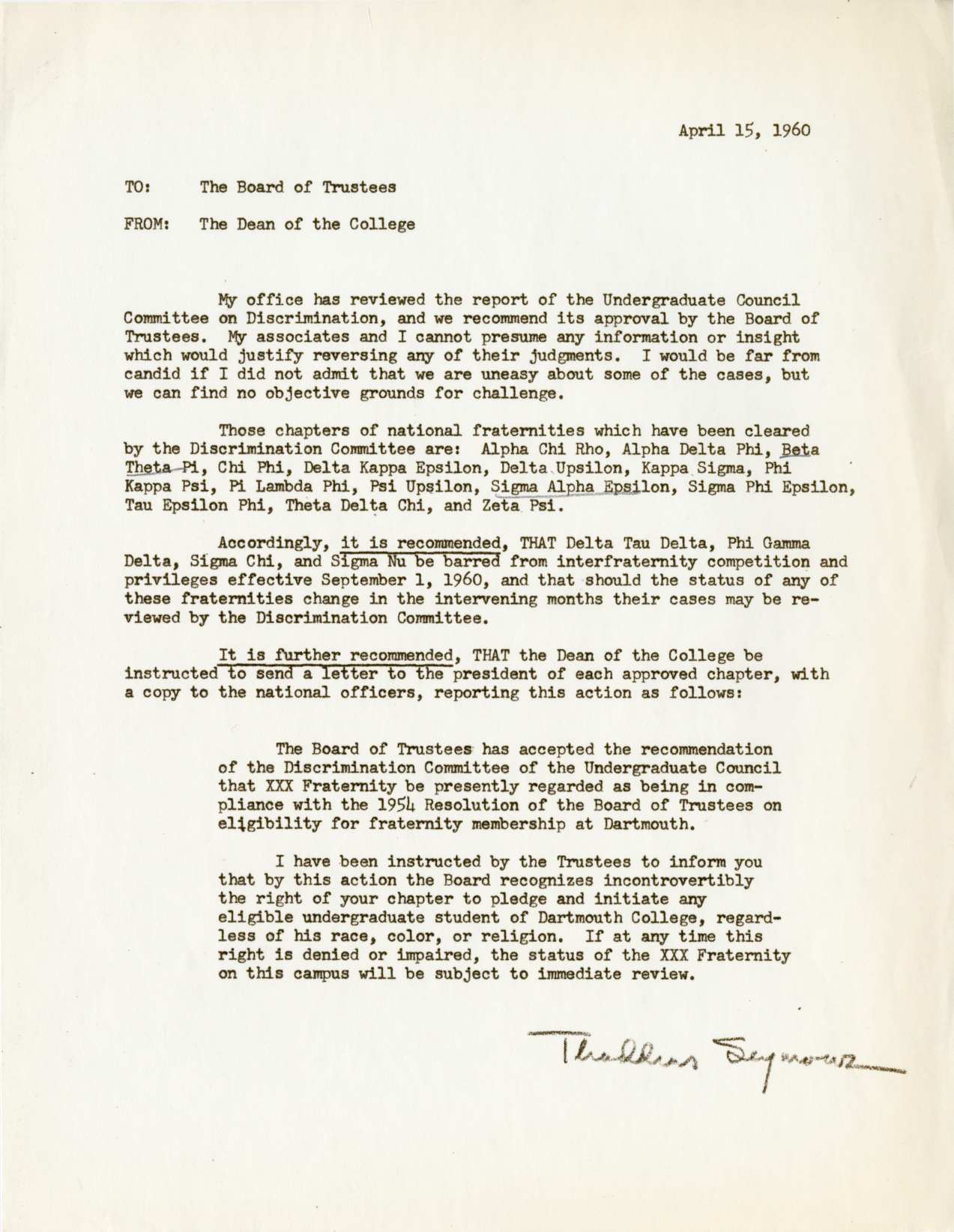 At the April 1, 1960 deadline, Dean of the College Thaddeus Seymour received the Disrcimination Committee's reports on every fraternity at Dartmouth. Seymour then made recommendations to the Trustees for a plan of action moving forward. 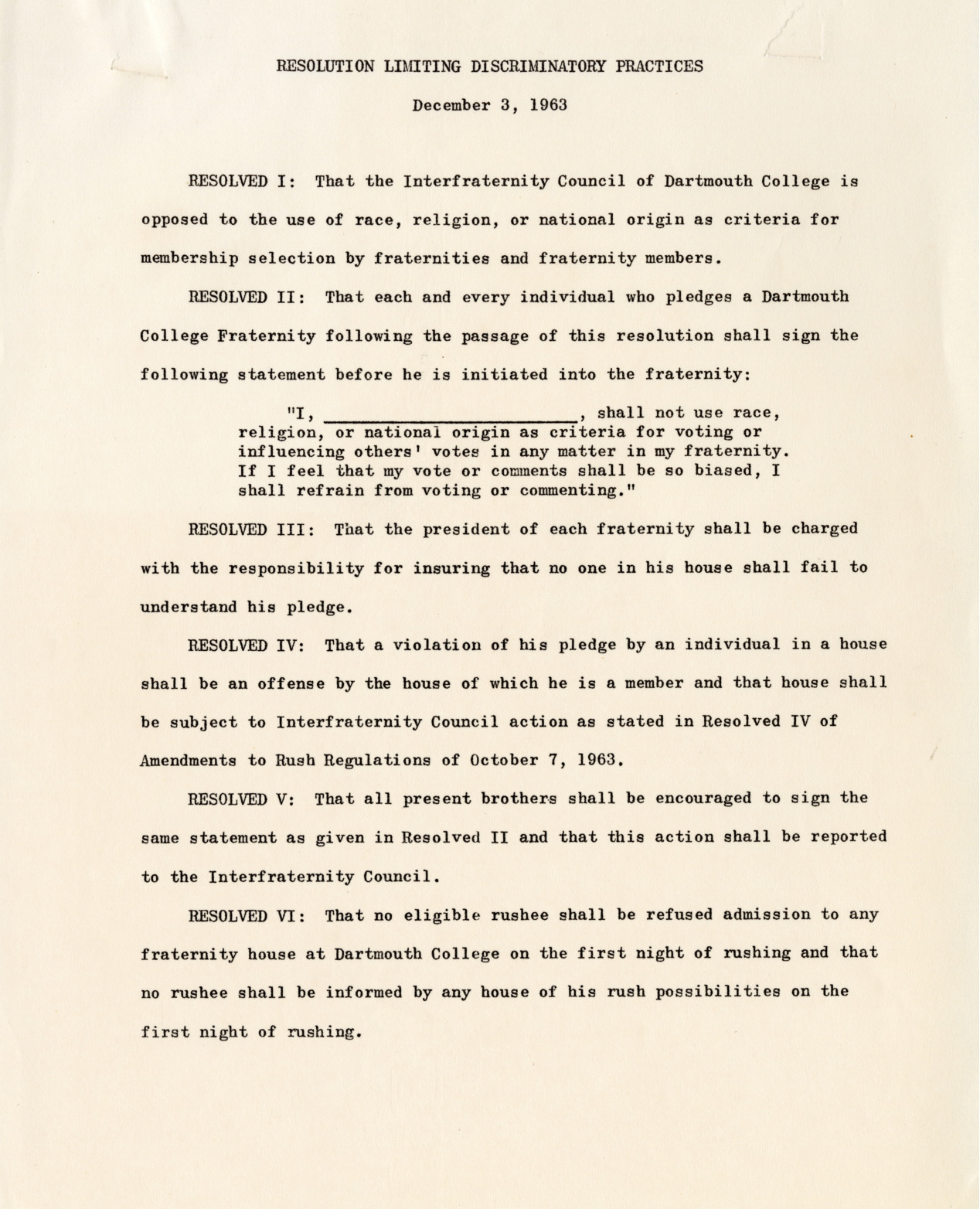 During rush week 1963, two incidents of racial discrimination occurred in which two African American students were denied entrance into fraternity houses during pledge period. Following the incidents, fraternities on campus drafted the following resolution: "We, the undersigned fraternities, feel that the Dartmouth fraternity system has been deeply damaged by apparent occurrences of racial discrimination during rush week, 1963." 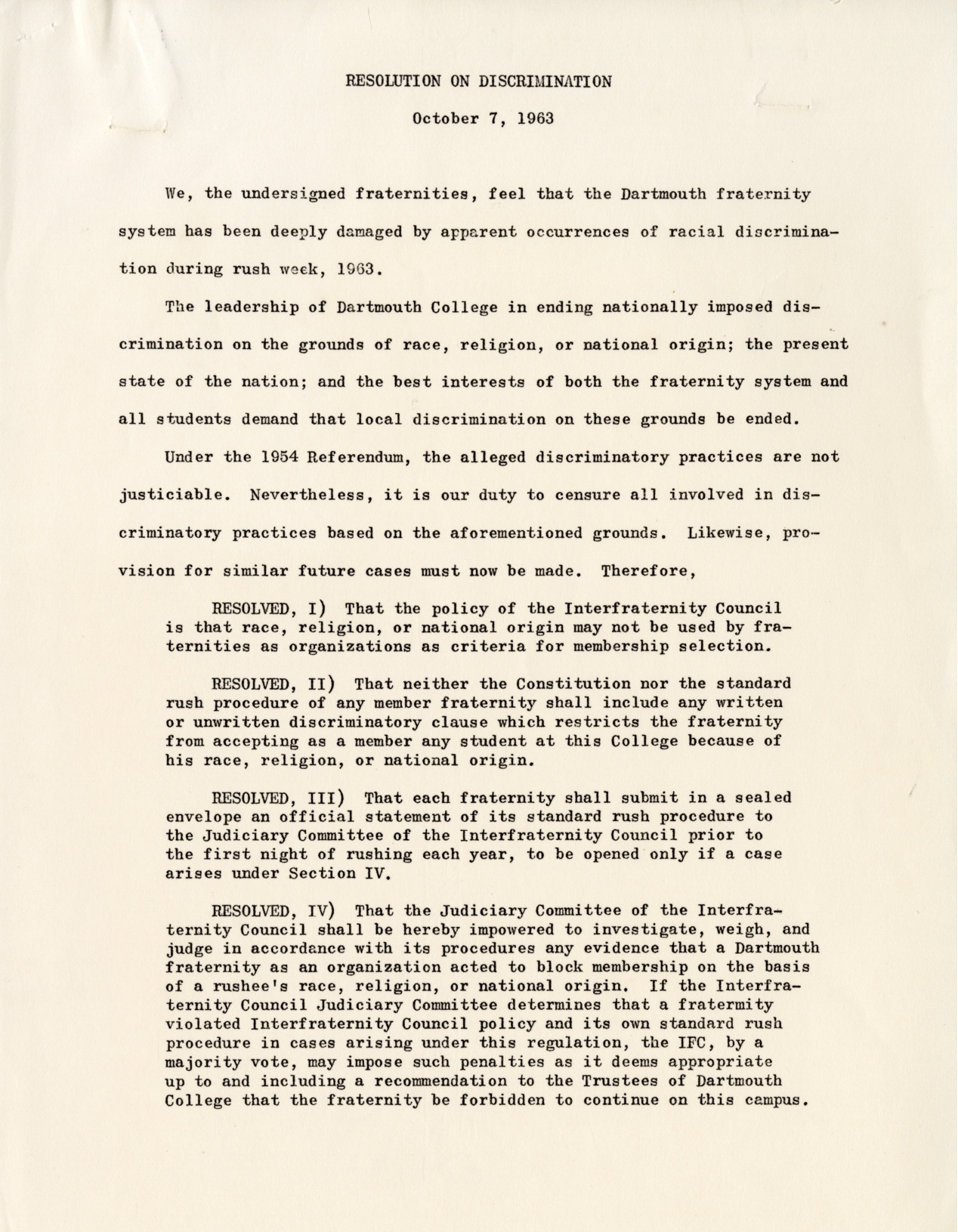 Following the incidents of racial discrimination during rush week 1963, the Dartmouth IFC passed the following resolution to progress the elimination of continued discriminatory practices in all fraternities on campus: "Resolved I: That the Interfraternity Council of Dartmouth College is opposed to the use of race, religion, or national origin as riteria for membership selection by fraternities or fraternity members." 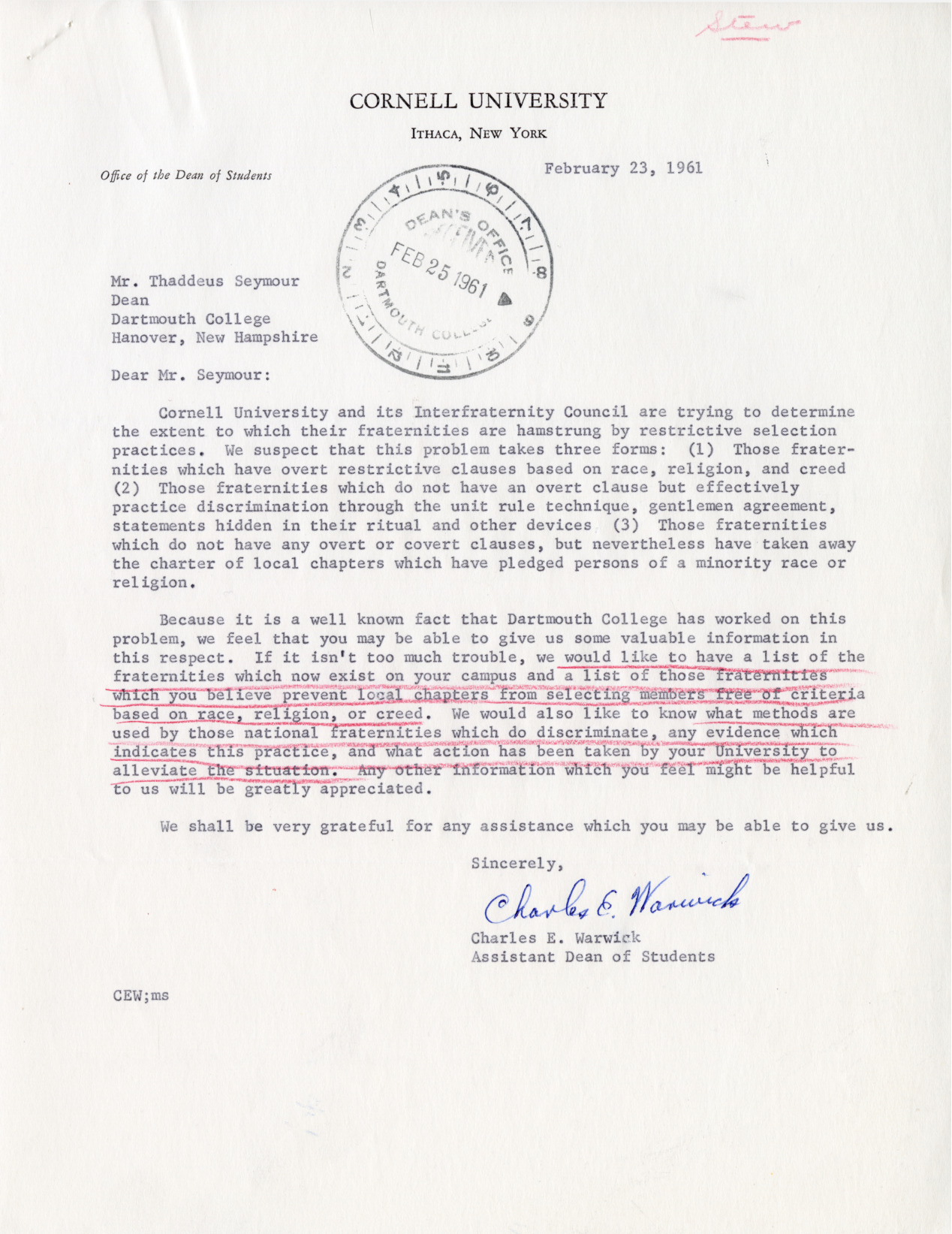 A few colleges and universities reached out to Dartmouth administrators for assistance in removing discriminatory membership clauses from fraternities on their respective campuses, after hearing of the successful movement at Dartmouth. Here is an example from the Assistant Dean of Cornell University.