In November 1986, five years after the work of the Advisory Committee on the Handicapped had concluded, twelve staff members of the College held the first meeting of what would later be called the Section 504 Committee on the Handicapped. Unlike its predecessor, this committee acknowledged and planned to address both learning disabilities and physical impairments. During their first year of operation, the Committee mainly focused on ways to identify students in need of accessibility accommodations and how to properly determine the supports each identified student required. More long-term goals of the Committee involved examining building accessibility across campus, an issue that remained largely unresolved despite the institution's new awareness of these issues in the wake of the previous committee.

While institutional self-evaluations across departments were still federally mandated to ensure compliance with Section 504, they were instrumental in establishing the Committee's understanding of providing student accommodation and building accessibility. The self-evaluations largely call for immediate action on the part of the College to assist faculty in accommodating disabled students. The Department of French and Italian writes, perhaps, one of the strongest condemnations about what they consider to be the failings of the College to address faculty needs, building adaptation, and general institutional concerns regarding accessibility, including a condemnation of the request to complete an evaluation:

It appears to us that the Departmental self-evaluation cannot be carried out in serious and professional way without the participation of educators specifically trained in the teaching of the handicapped. Any efforts on our part to anticipate the ways in which a multitude of impairments would affect learning in our courses would be, at best, the work of well-intentioned amateurs.

John D. Lyons, Chair of the Department of French & Italian

The ire of this professor is undoubtedly justified, as the self-assessments laid bare the severity of the lack of administrative support for teachers accommodating disabled students. Various departments passionately defended and advocated for their disabled students, called out inconsistencies, and urged the College to be proactive about making more residential areas accessible. However, their remained departments vastly underestimated the capabilities of individuals with certain impairments, such as the Drama Department’s assessment that specific disabilities would be wholly impossible to accommodate.

Like the previous round of self-evaluations, these assessments give a rich and detailed look into educational operations and variety of opinions and approaches to making those operations as accessible as possible. Despite the explicit desire and willingness to accommodate disabled students, it is not exactly clear whether any suggestions or ad hoc procedures were ever officially implemented or adopted at the College. However, by the end of 1987, the Committee relied upon these evaluations, their own records, and the records of the previous committee to create a list of priority changes to Dartmouth’s physical plants. In March 1988, the Committee proposed an ambitious preliminary list of recommended construction to the College, although they knew many of the projects were unlikely to receive funding due mostly to high estimated costs of renovation.

Mindful of daunting nature of projected costs of building alterations and frustrated by College aesthetics threatening the move towards accessibility, the Committee recommended a phased approach to addressing these problems to take place over the course of three fiscal years, not unlike the previous Priority I, II and III phases in the Advisory Committee's old Transition Plan. 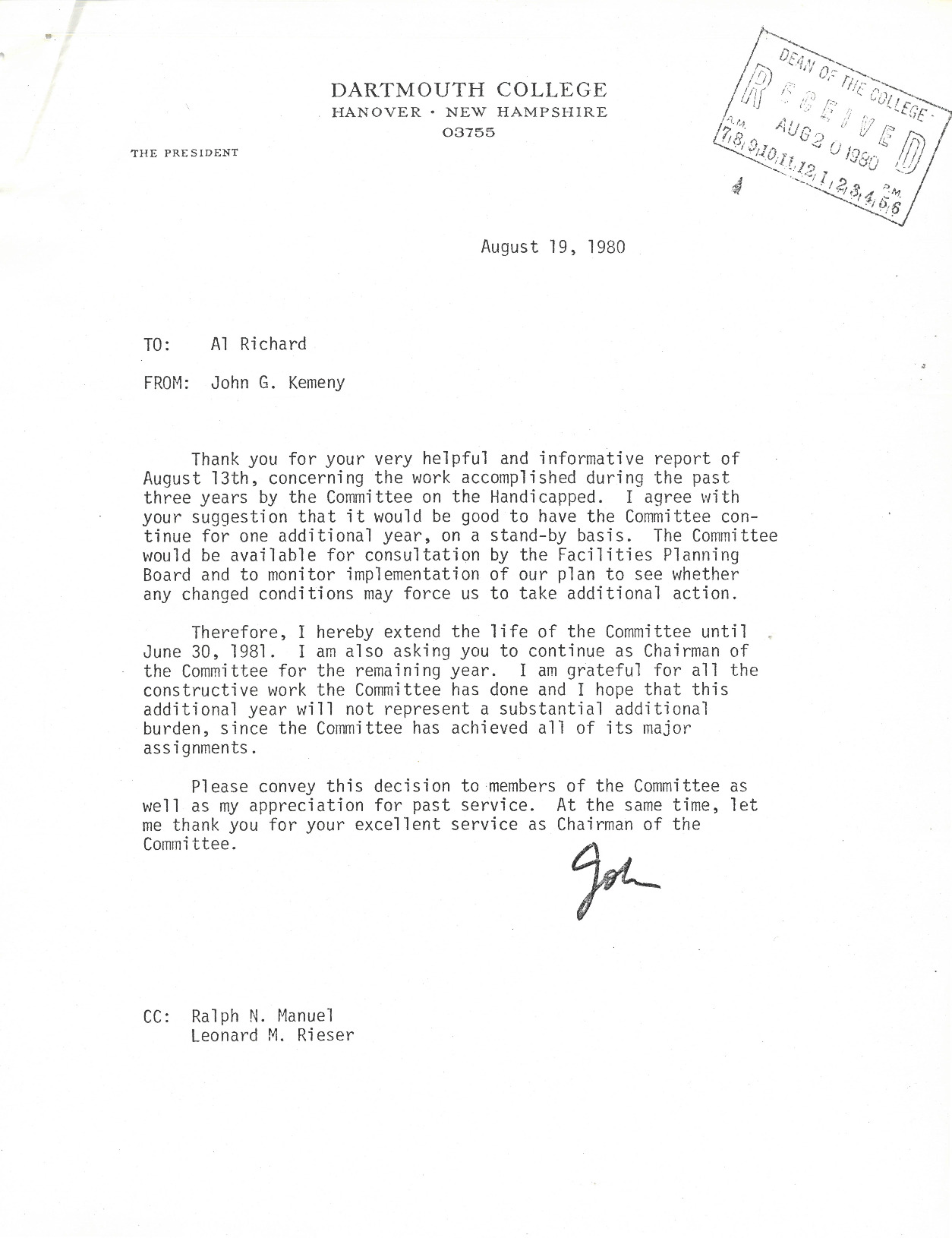 President Kemeny writes the chairman of the Committee on the Handicapped to grant permission for the committee to continue for a year longer than originally planned on a stand-by basis, as suggested in the committee's three-year report. This memo shows the administration's acknowledgment of a need to address issues of accessibility long after the initial responses to new federal legislation, foreshadowing the establishment of the Section 504 Committee on the Handicapped five years later. 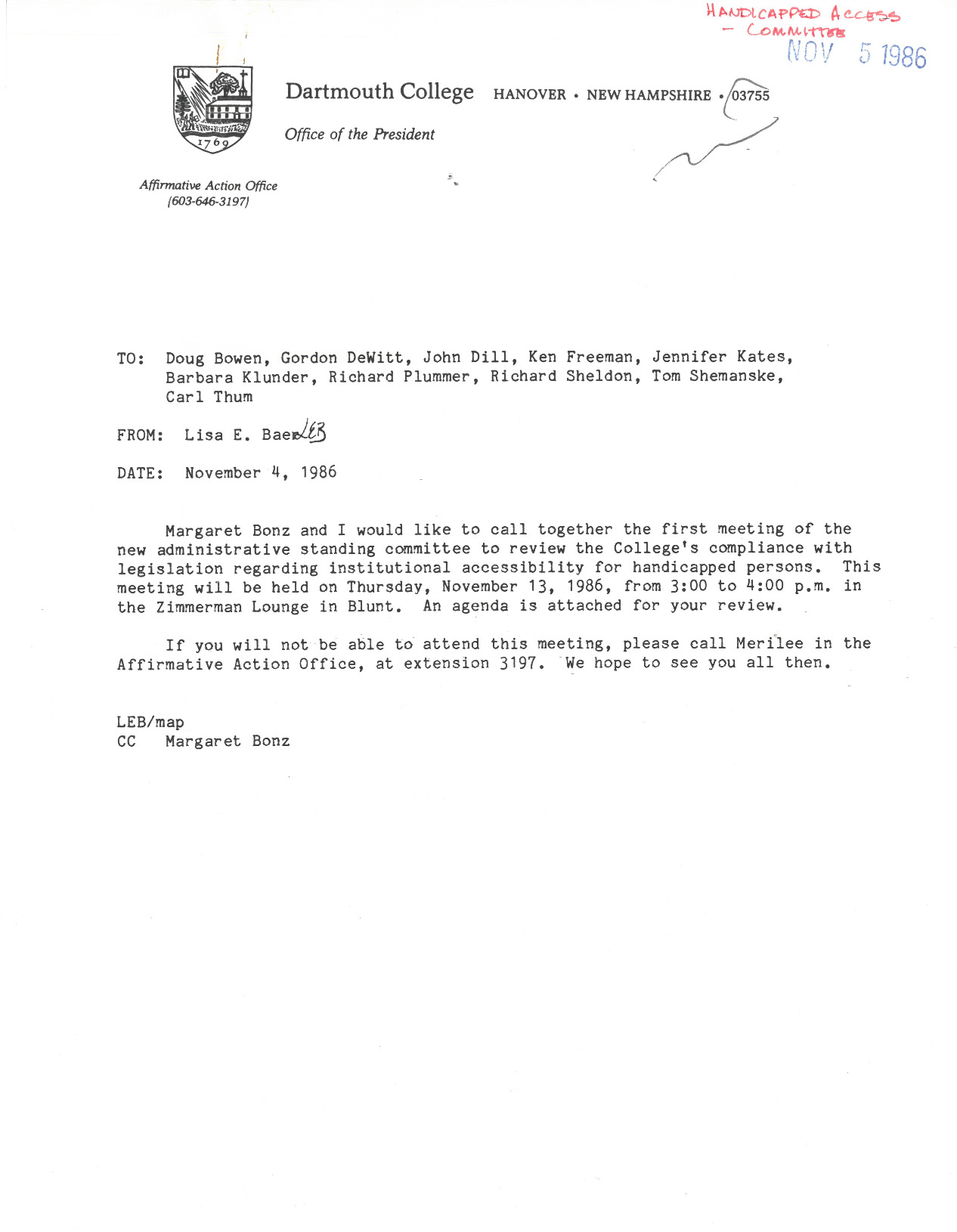 Memo announcing the establishment of “new administrative standing committee to review the College’s compliance with legislation regarding institutional accessibility for handicapped person[s]” to Dartmouth staff slated to serve on the new committee. This committee would be known as the Section 504 Committee. 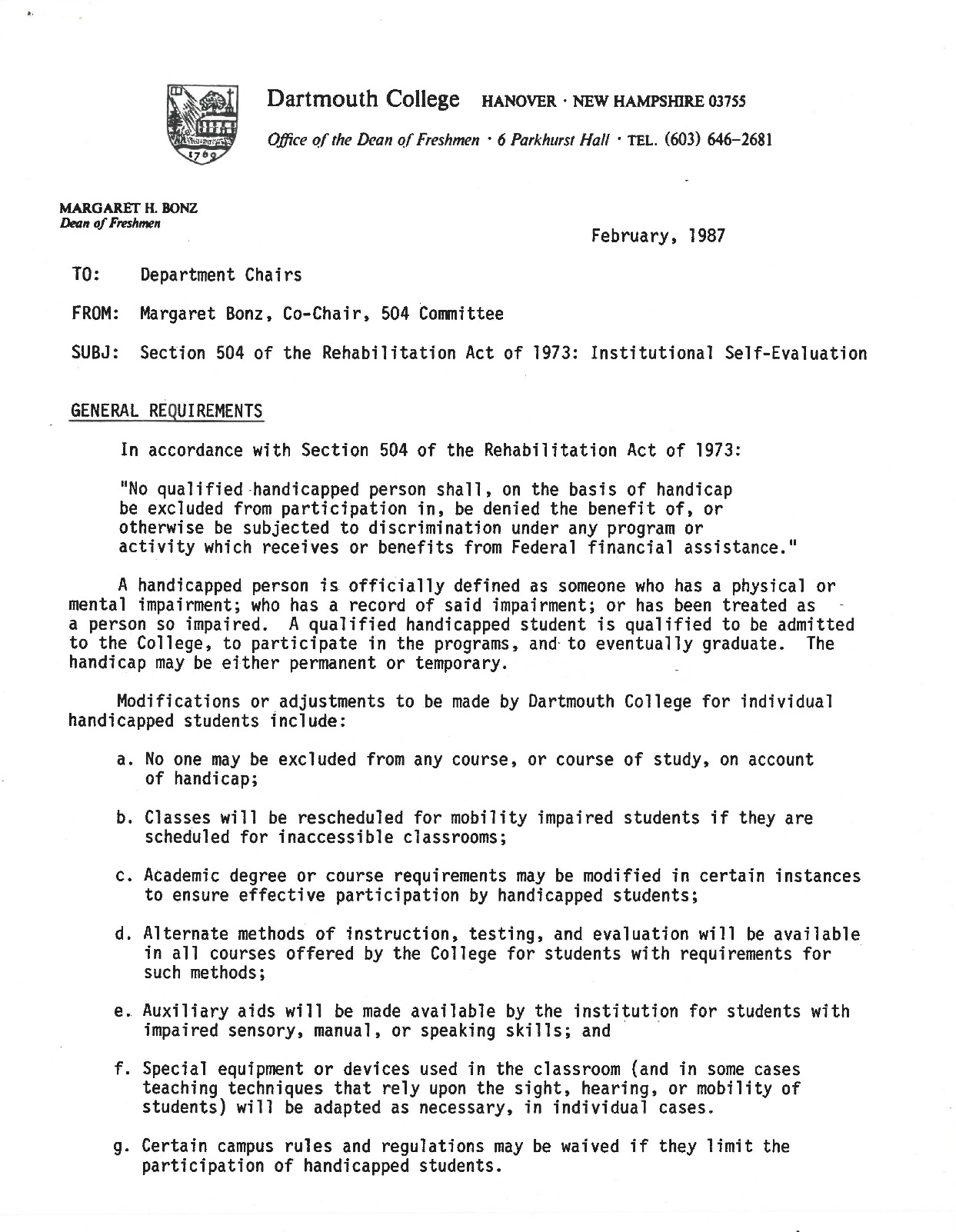 In this memo, co-chair of the Section 504 Committee informs department chairs of their need to complete an institutional self-evaluation to ensure Dartmouth's compliance with federal legislation. Attached to the memo is a guide for how to complete the self-evaluation, outlining the questions that need to be systematically addressed in departmental self-assessments. 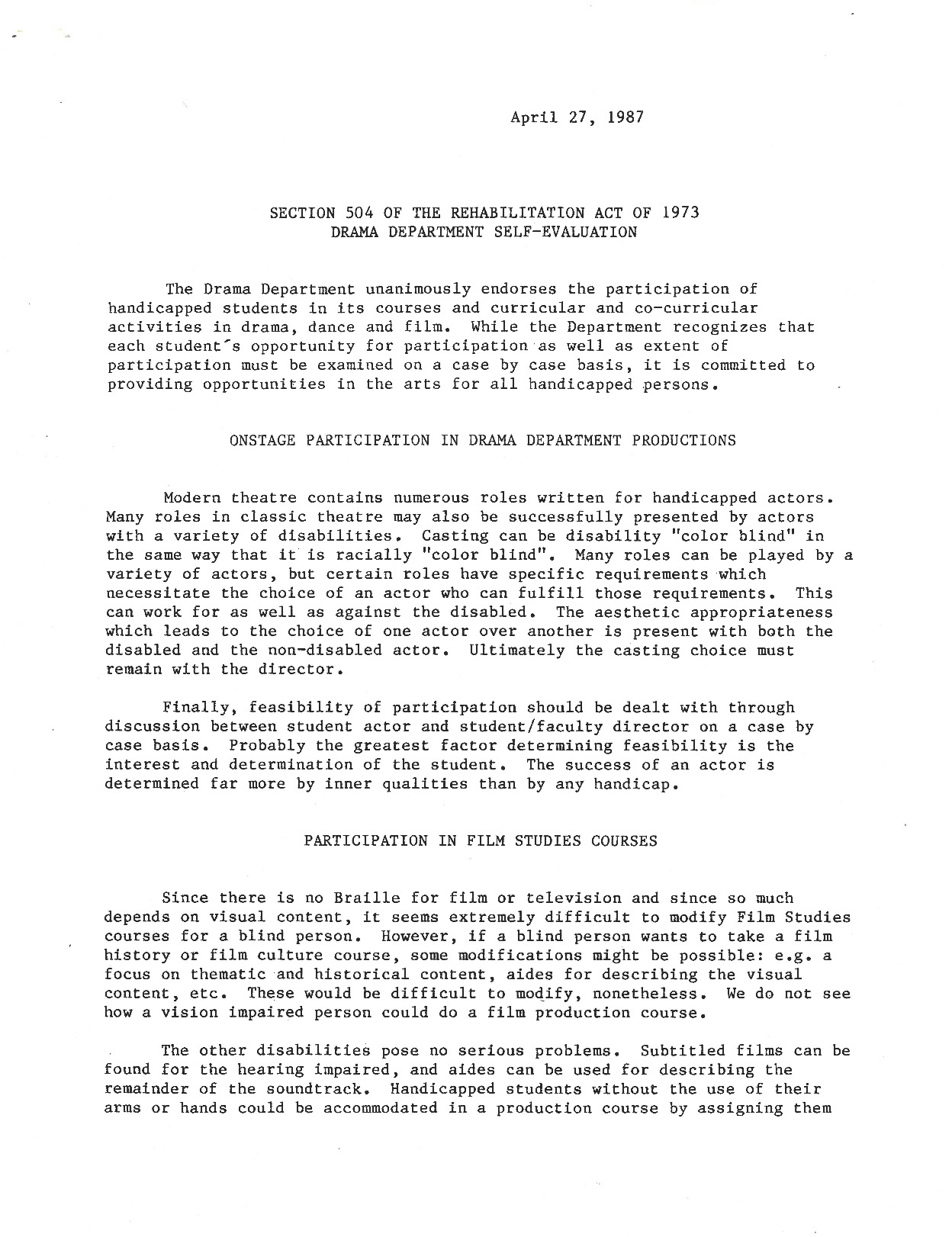 A lengthy self-evaluation by the Department of Drama in which some disabilities are declared categorically impossible to accommodate. The evaluation includes an assessment of every course the department offers and makes conclusions about their “suitability” for students with disabilities. 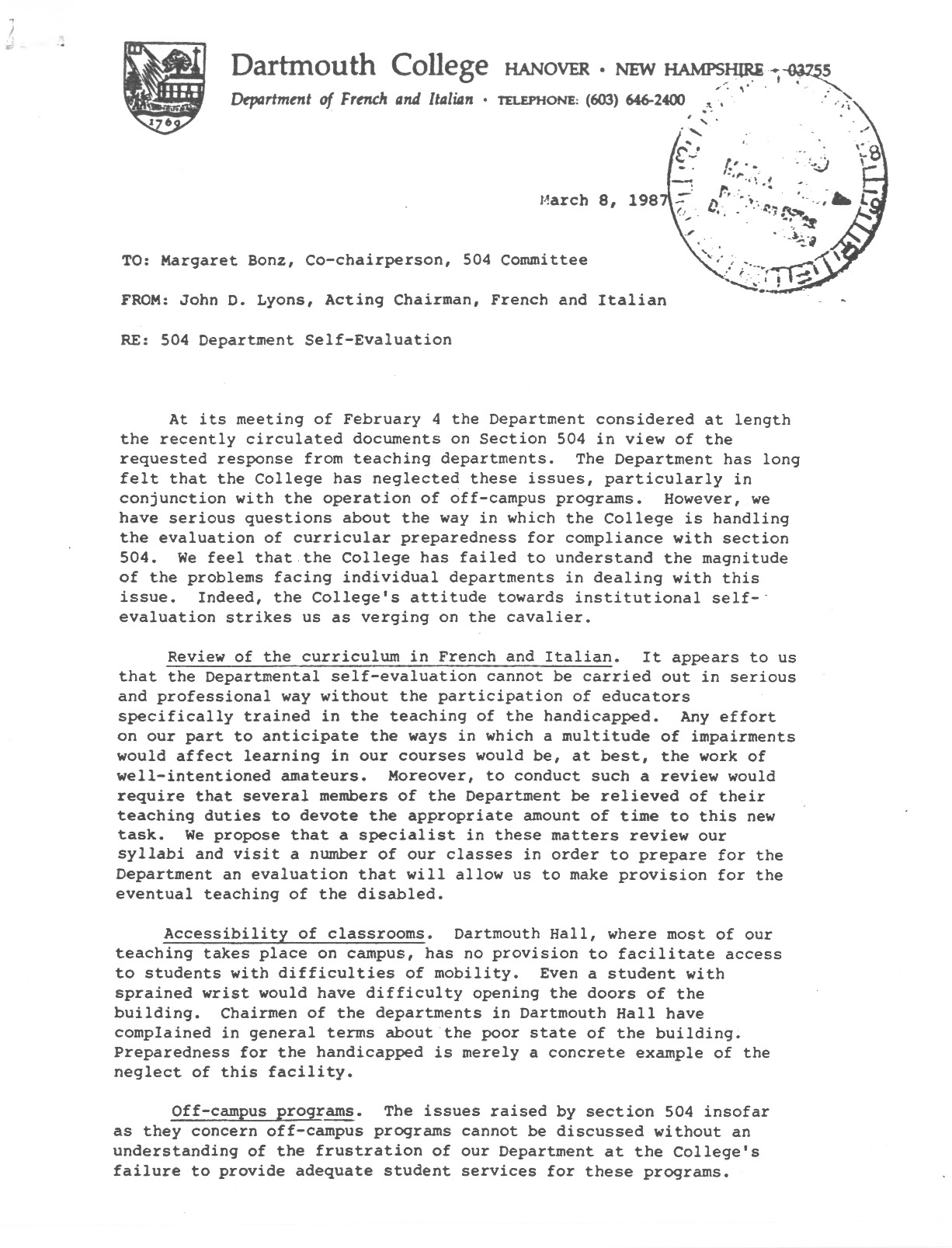 The self-evaluation completed by the Department of French and Italian in 1987. It includes what they consider to be the failings of the College to address faculty needs, building adaptation, and general institutional concerns regarding accessibility, including a condemnation of the very request for self-evaluations. 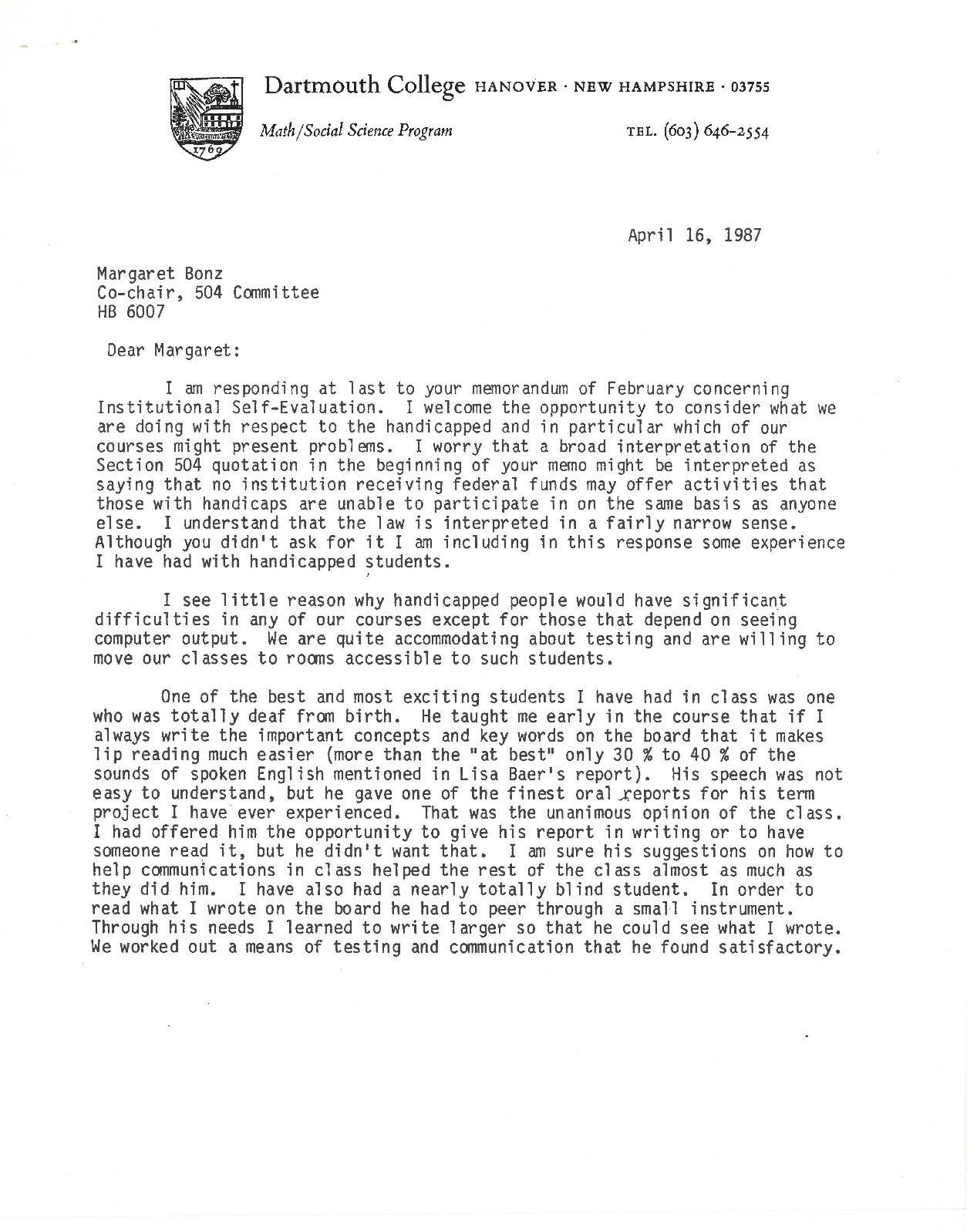 The self-evaluation for the Math and Social Science Program, in which Chair Robert Norman recounts his experiences teaching a deaf student and a nearly blind student, the accommodations he made, and his thoughts regarding accessibility in his department more broadly. 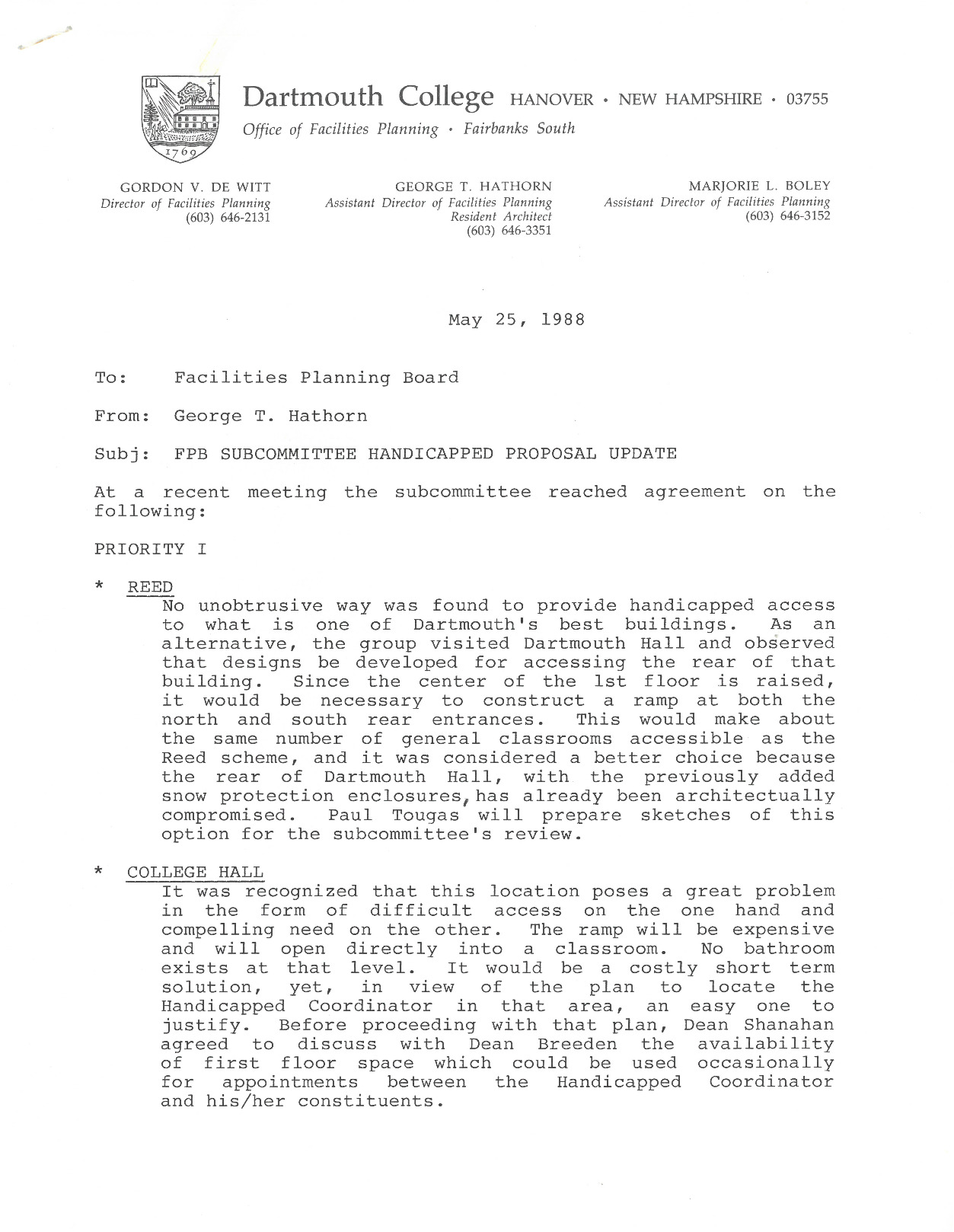 Statement by the Facilities Planning Board that includes an explanation for why accessibility renovations for Reed Hall have been cancelled, as “No unobtrusive way was found to provide handicapped access to what is one of Dartmouth’s best buildings.” Renovations are planned for Dartmouth Hall instead. 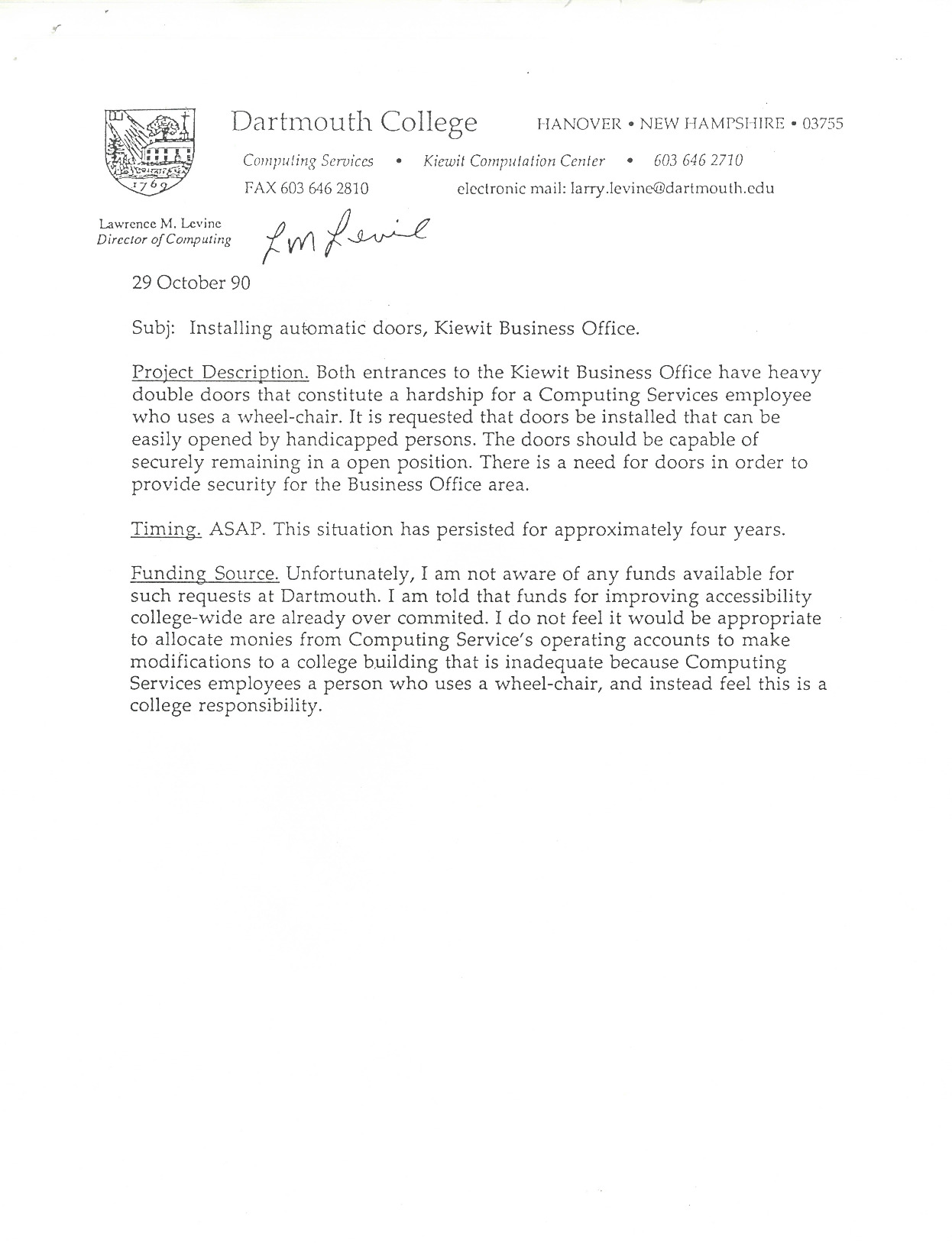 Memo from the head of the Kiewit Business Office regarding an accessibility issue outside the priority groups. A current employee in a wheelchair has difficulty opening the doors to the building and has been dealing with the problem for four years. Doors that would be easier to open are requested, although funding is cited as an issue. 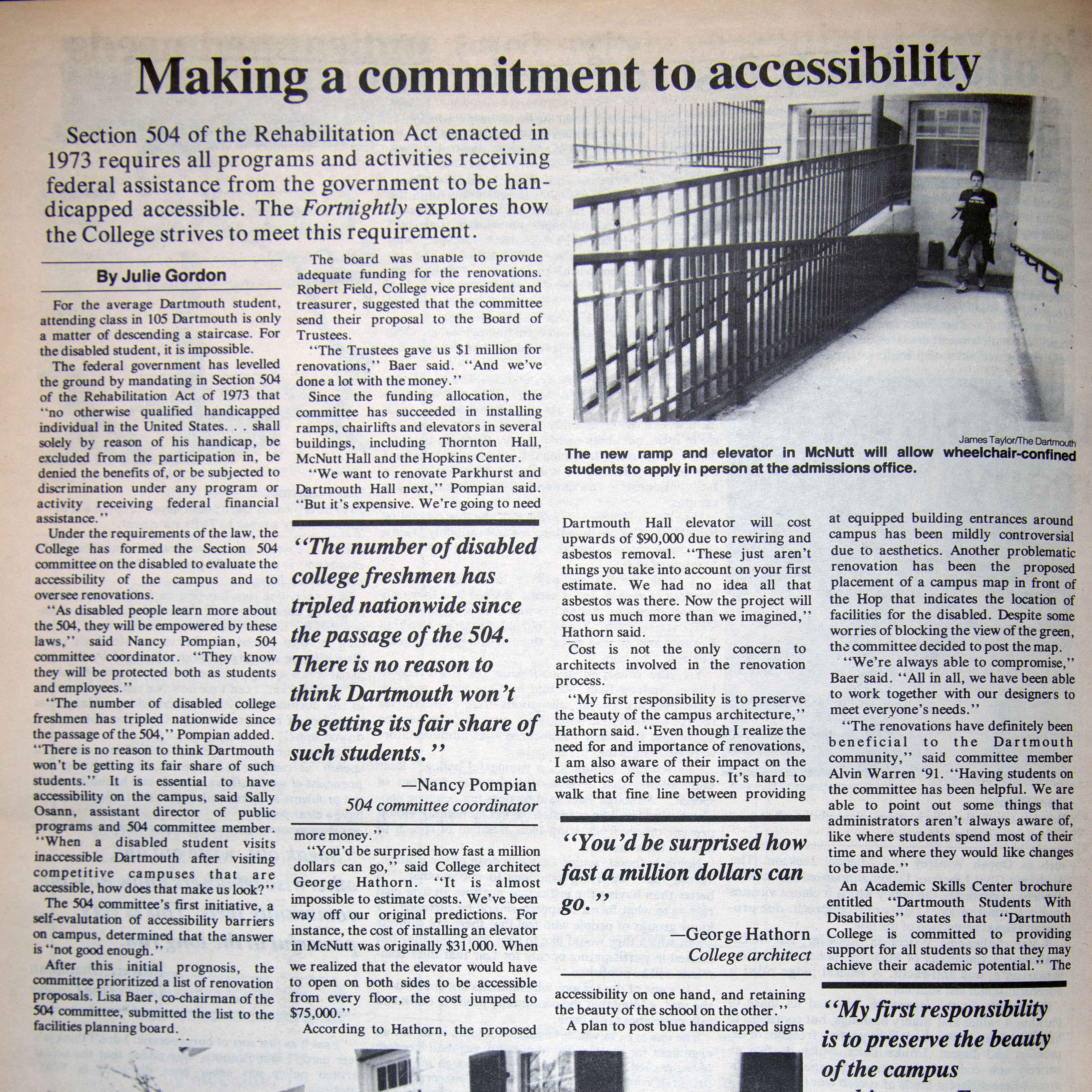 An interview with George Hathorn in which he discusses accessibility renovations and their potential impact on his commitment to preserving campus aesthetics as the College Architect.