On December 1, 1977, director of the Facilities Planning Office Gordon DeWitt sent a message to the Committee on the Handicapped detailing a preliminary working draft of a transition plan. Two weeks later, the first Transition Plan had been divided into three priority stages thanks to the important, ever-recurring question of the money required to transform campus: Priority I would be for construction that the College should do regardless of any federal mandate. Priority II would be designated for construction that could be completed quickly. Priority III items would be the construction that the College would have not considered undertaking if not for Section 504. The idea behind creating Transition Plan I was that the College needed to quickly comply with Section 504 requirements.

However, these quick fixes meant that the changes made to campus during this time were often cheap and inevitably caused problems for future College staff attempting to make campus more accessible. Out of the original 31 buildings deemed inaccessible, the full Transition Plan only includes 24 buildings, and the College chose to only invest in 12 identified in the Priority I transition plan. In total, only eight of the buildings were allocated the full amount of money they required and only one of those buildings had any amount of money allocated toward it during Priority I, the construction that the Committee determined the College should do regardless of federal compulsion.

Budgetary issues continued to plague the renovations, no thanks in part to the Trustees’ reluctance to allocate funds for accessibility. At the urging of the Trustees, in September of 1979, the Committee prioritized the buildings that would undergo construction following the conclusion of Priority I according to the following criteria: 1) whether it was used by the general public 2) whether it was used primarily by Dartmouth students 3) immediacy of the need to access the facility. 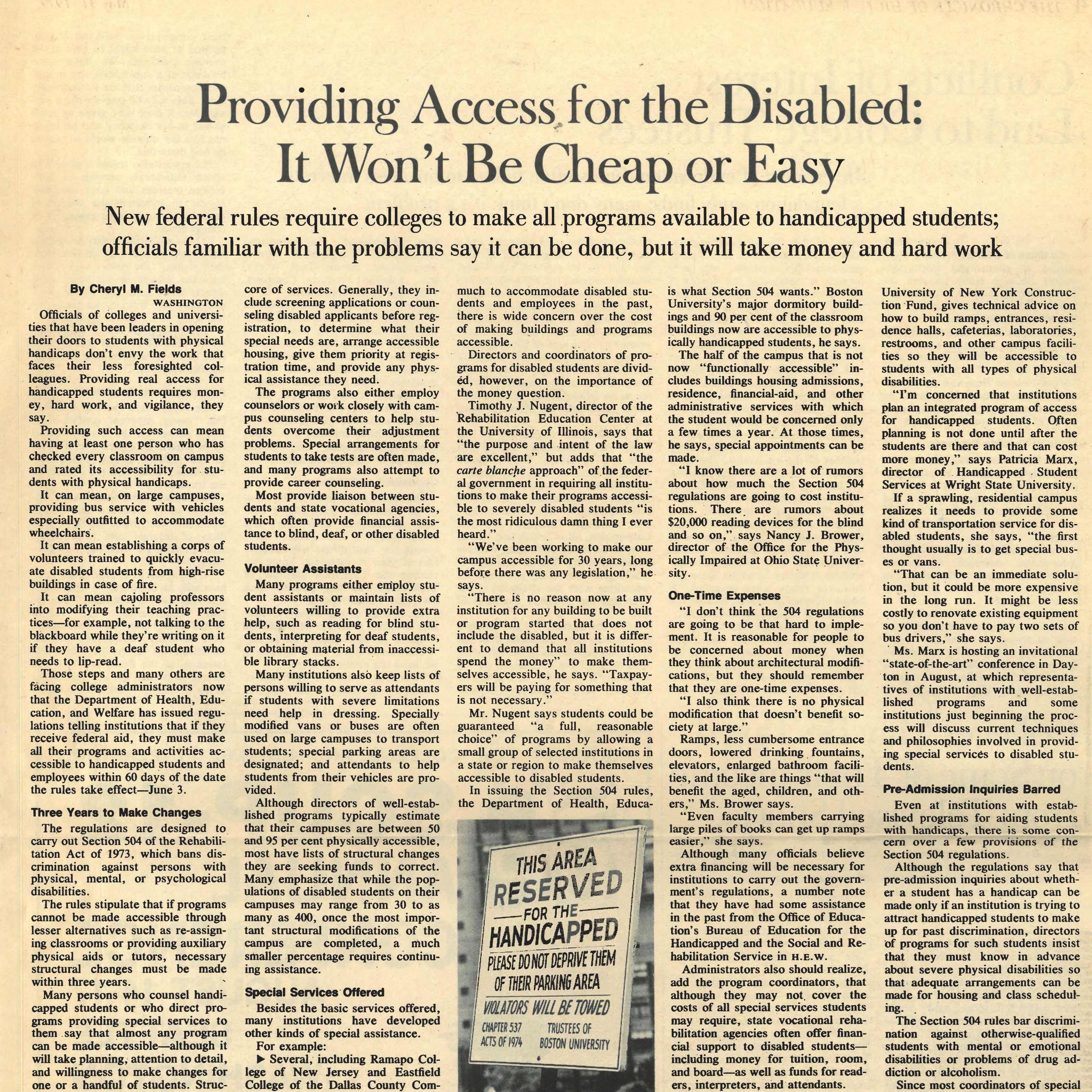 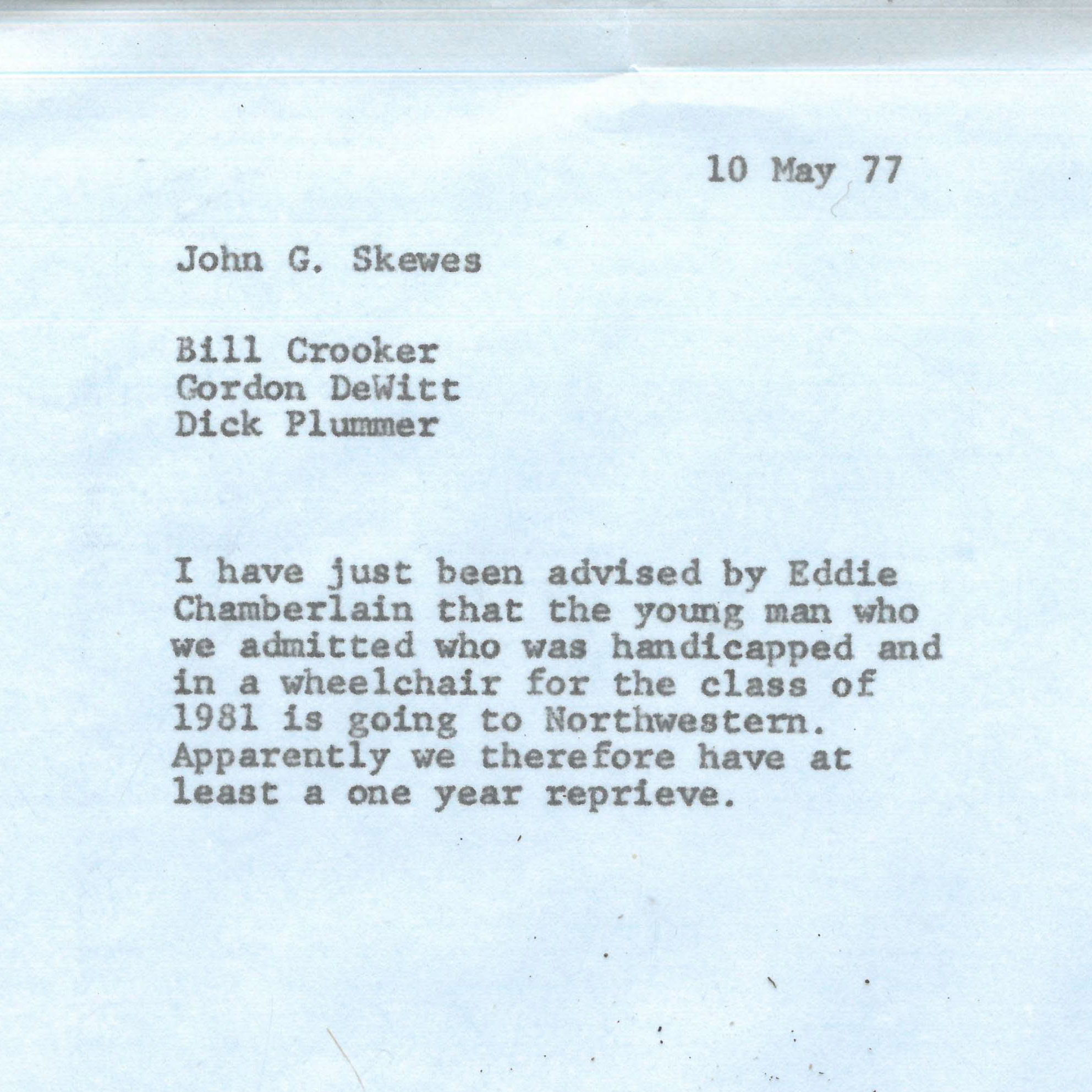 A memo expressing relief that a “young man who [Dartmouth] admitted who was handicapped and in a wheelchair for the class of 1981 is going to Northwestern.” The student's decision to attend college elsewhere is characterized as providing the College “at least a one year reprieve.” 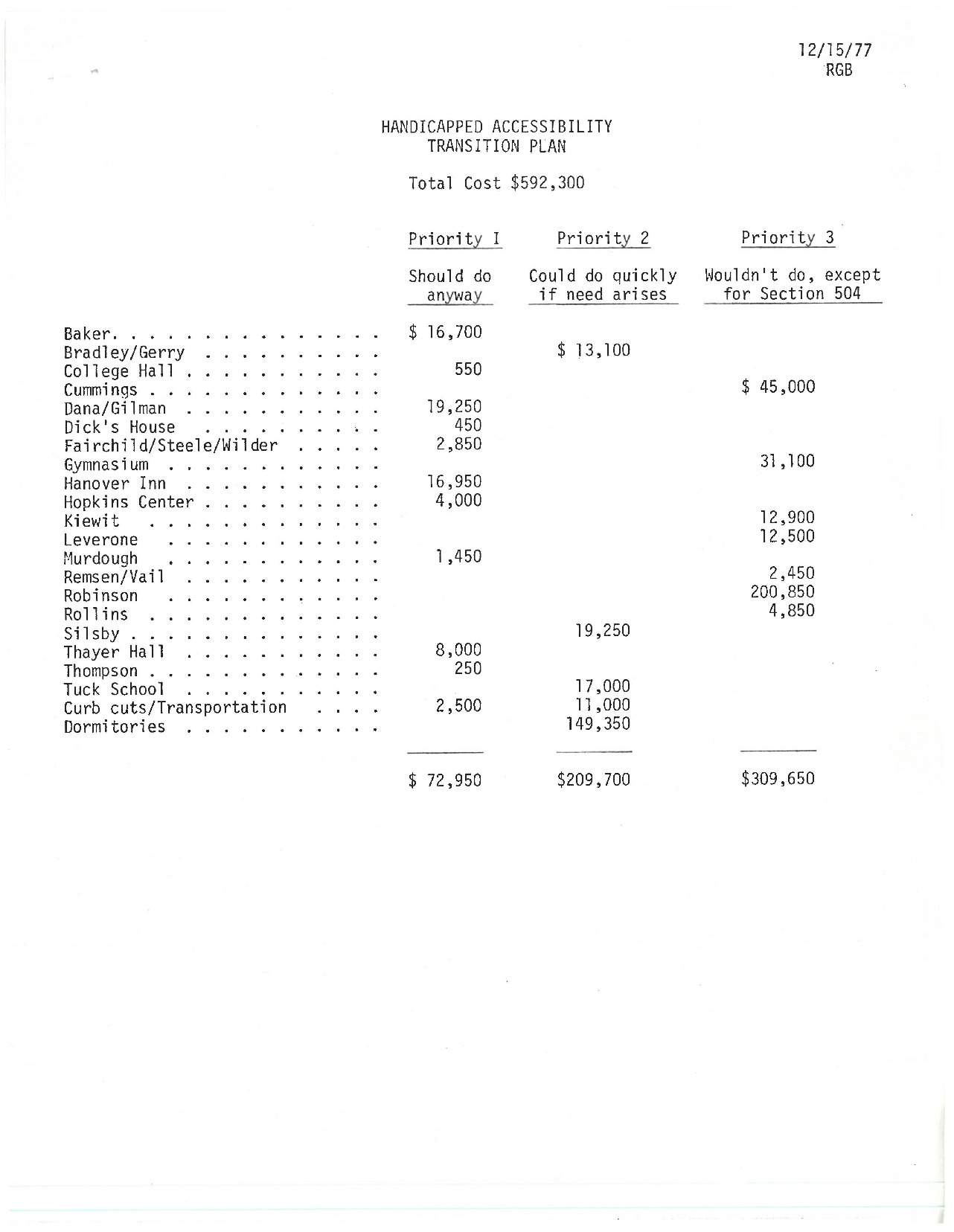 An early incarnation of the Handicapped Accessibility Transition Plan, which includes a list of campus facilities, estimates of renovation costs, and very brief descriptions of the distinctions between Priority I, Priority II, and Priority III renovations. 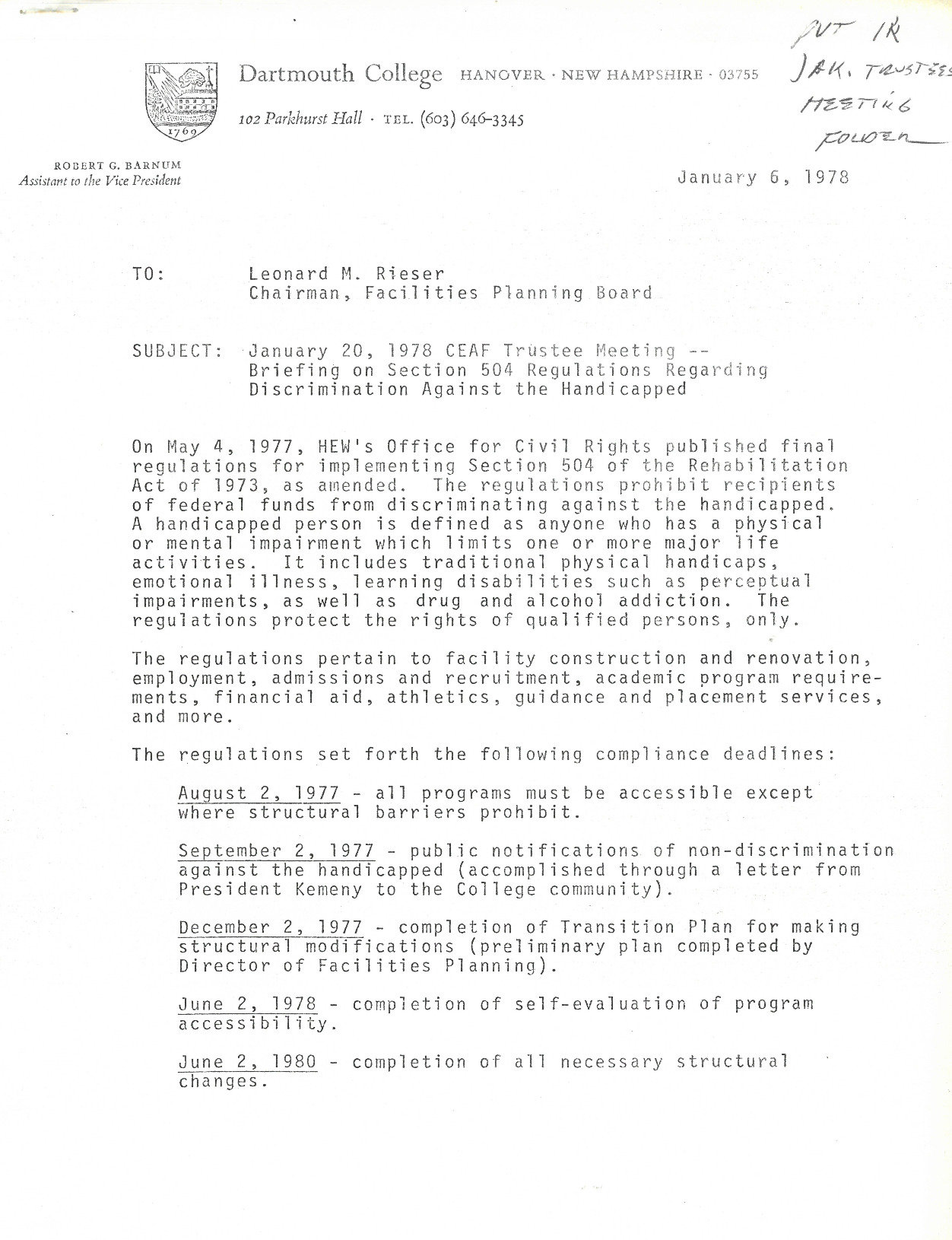 An overview of developments related to Dartmouth’s response to Section 504 of the Rehabilitation Act of 1973 prepared for Leonard Rieser in advance of a January 20, 1978 Board of Trustees meeting. The document outlines compliance deadlines, a survey of campus facilities with estimates of renovation costs, and descriptions of the different priority levels in the institutional Transition Plan. 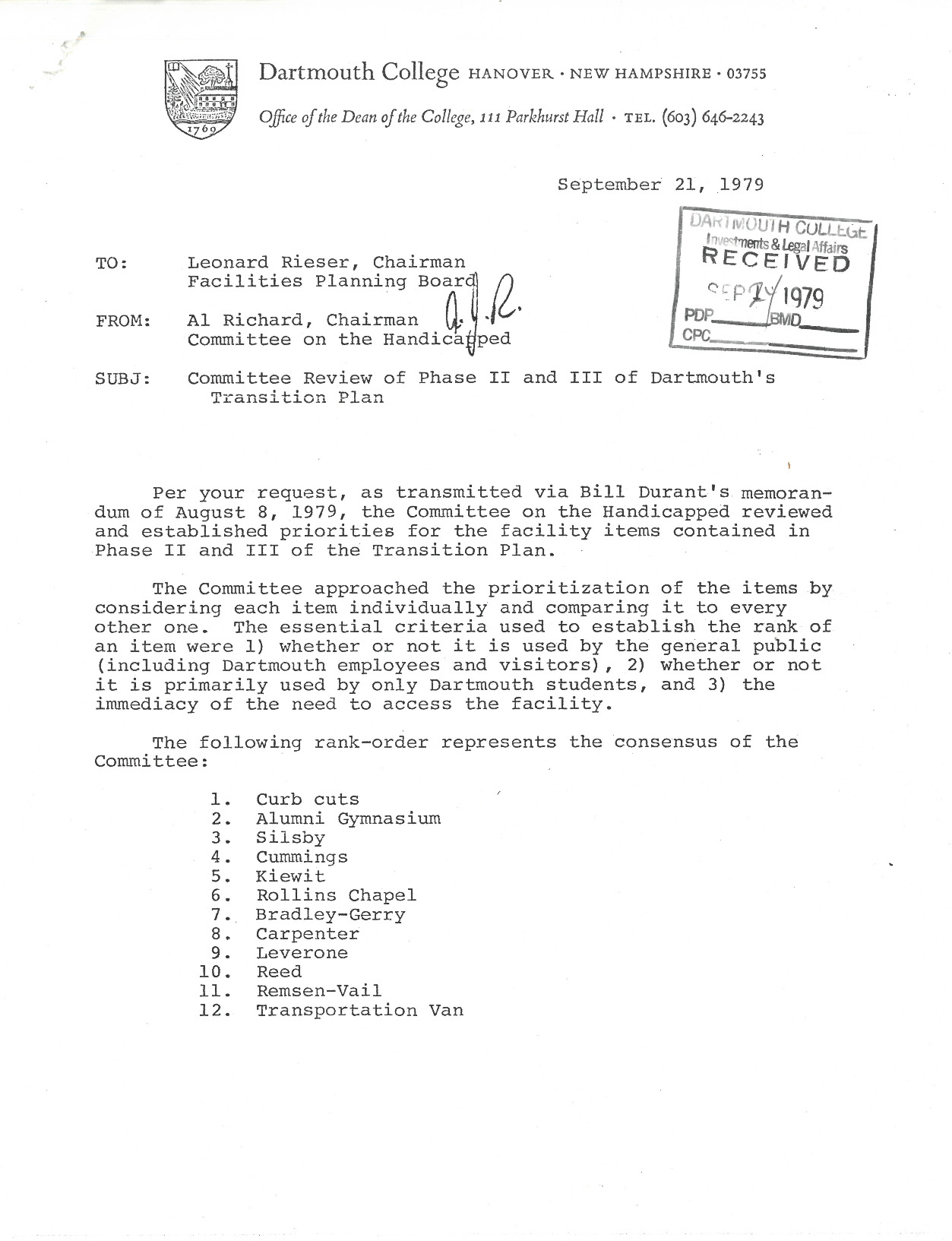 The Committee review of Phase II and III of their Transition Plan. The Committee lists the buildings that would undergo construction following the conclusion of accessibility renovations for Priority I buildings. This review establishes the order in which the College should prioritize certain buildings. 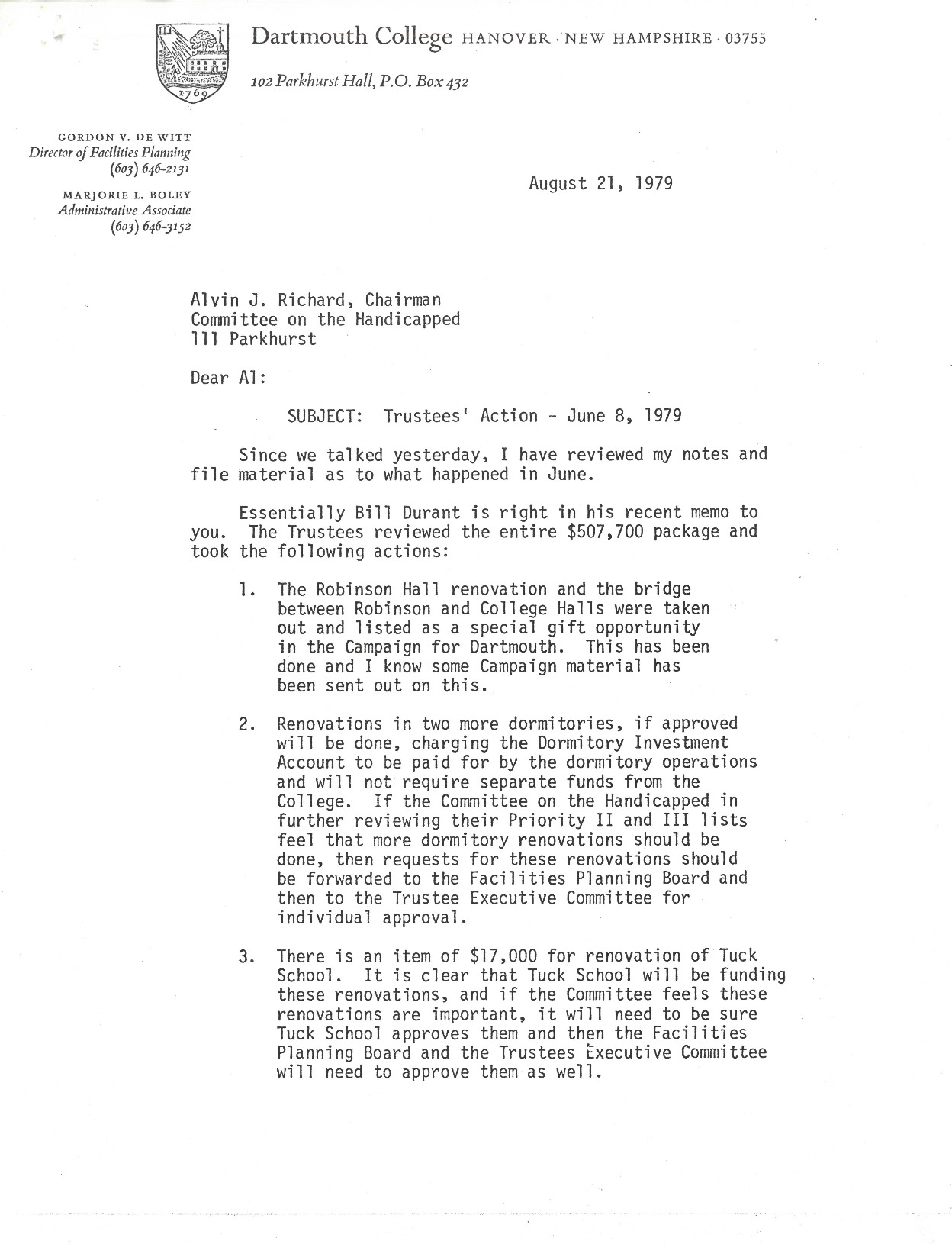 An internal memo in which the Committee is informed that the remaining items on the Priority II and III budgets will require individual approval from both the Facilities Planning Board and the Trustees Executive Committee. In order to avoid committing the College to funding accessibility renovations unless absolutely necessary, the memo states that a “go-slow” posture should be adopted to make room for gift opportunities.