In February 1967, College Designer John Scotford sent a memo to President Dickey, Richard Olmsted, Edward Chamberlain, and Dr. Raymond Jackson regarding the possibility of making Dartmouth College physically accessible.  Scotford had visited the campus of Southern Illinois University in 1966 and “was struck by the effort of that institution made to encourage crippled students to attend SIU.”  Scotford wondered if Dartmouth might do the same. While Scotford initially frames accessibility as a way for Dartmouth to gain an edge over competing schools, his memo occasioned replies with a great deal of kindness and compassion for the disabled.

Dr. Raymond S. Jackson, the medical director of the College, advocated for accessibility but also spoke about the impracticalities associated with adapting campus. Al Dickerson, Dean of Freshmen, provides information about the student wheelchair users he had knowledge of in his twenty years working at the College, including an anecdote about how a student with severe physical handicaps would have experienced campus life during this time. A student who had become paraplegic in his final year of high school received tutoring from member of the Dartmouth faculty for the remainder of his high school career and matriculated to the College the following September. Although he was bright and capable, he experienced “frequent interruptions caused by the sores and infections to which some paraplegics suffer because of the lack of circulation below the waist.” In spite of the “warmhearted people” who tried to help this student, he remained at Dartmouth for only two years. The College was simply not equipped for a paraplegic.

I hope and trust that Dartmouth will continue its present concern for serving disadvantaged students. My present hunch is that we can utilize our particular environment, and the resources that we can muster, more effectively in serving other types of disadvantage students than we could in becoming a specialized institution for the service of crippled students. But let's talk about it.

Albert I. Dickerson, Dean of Freshman

The College ought to be recognized and commended for accommodating disabled students long before the codification of any federal legislation, as evidenced by these early conversations about disability, but this student's story is representative of the limited support for disabled community members. Lack of infrastructure to support students—even basic accommodations like changing class locations through the Office of the Registrar—would have severely strained any disabled student’s academic experience. Even today, disability is often an isolating experience regardless of its visibility. One can only imagine how isolated this student felt alone in his struggle to acclimate to campus life without any codified support system.

Despite the considerable amount of thought staff and administrators like Al Dickerson put into disability at Dartmouth, there was little internal motivation to change any policies in the College due to the few students with substantial physical handicaps and limited funding available to make it worth the College’s while to invest in new infrastructure. This is the hard truth of the traditional priorities of a college of Dartmouth’s stature—beyond educating its student body. 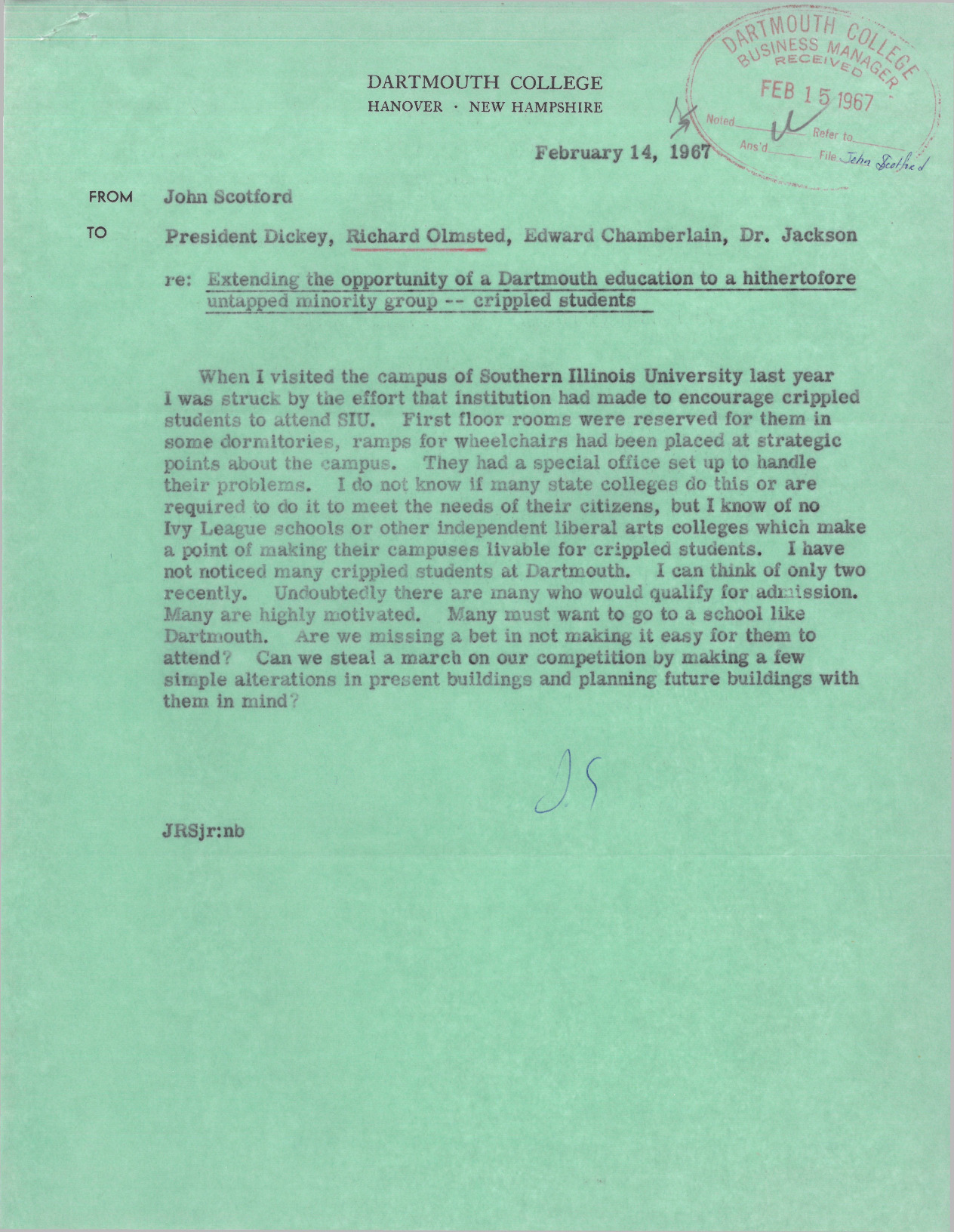 Memo from Hopkin's Center designer John Scotford regarding his visit to the campus of Southern Illinois University. He recounts certain accessibility features present and asks if alterations could be made to the Dartmouth campus in order to effectively recruit students with disabilities. Doing so is presented as a way to gain an edge over competing schools. 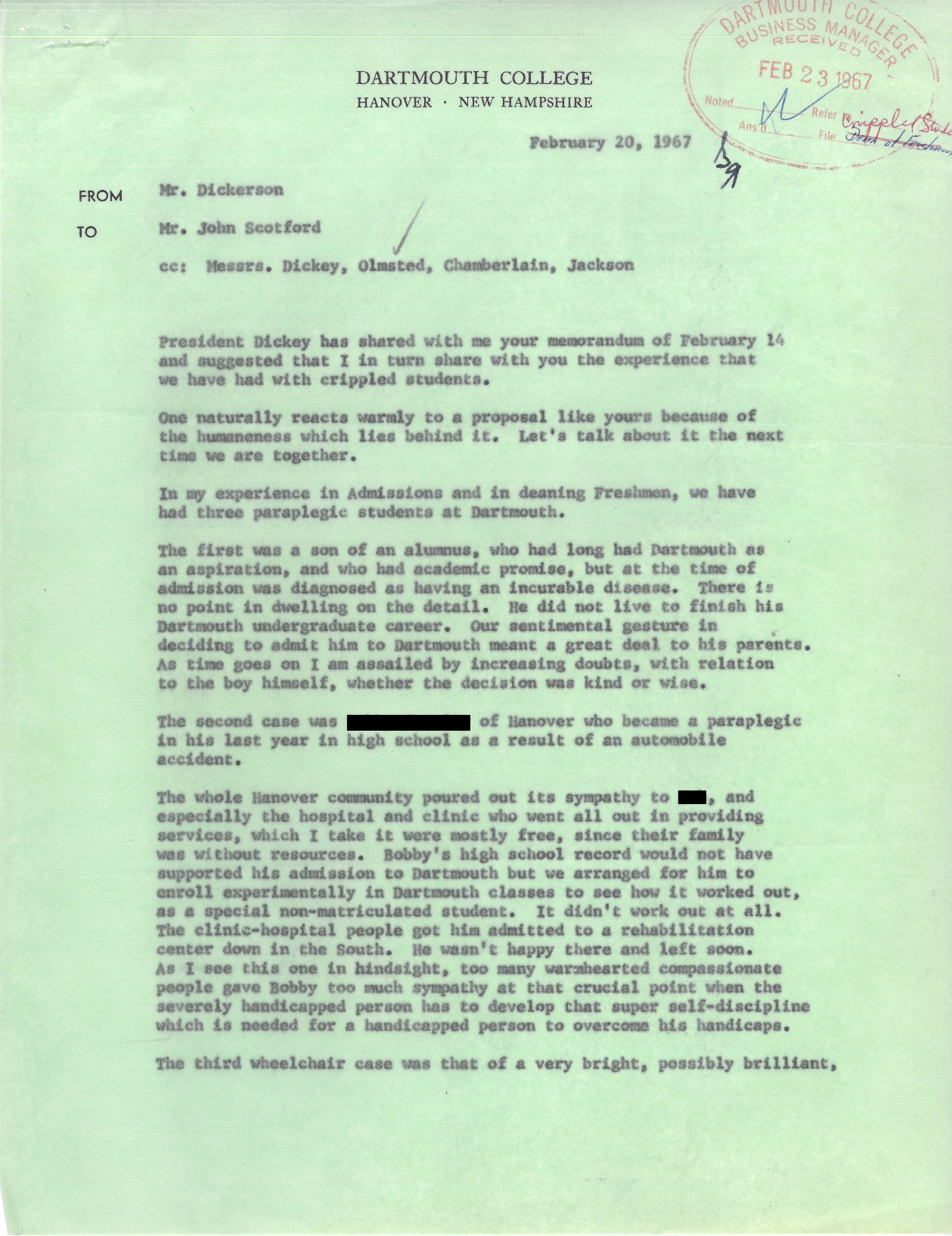 Memo sent on behalf of President Dickey, in which Dean of Freshman Al Dickerson provides information about the student wheelchair users of whom he was aware in his twenty years working at the College. 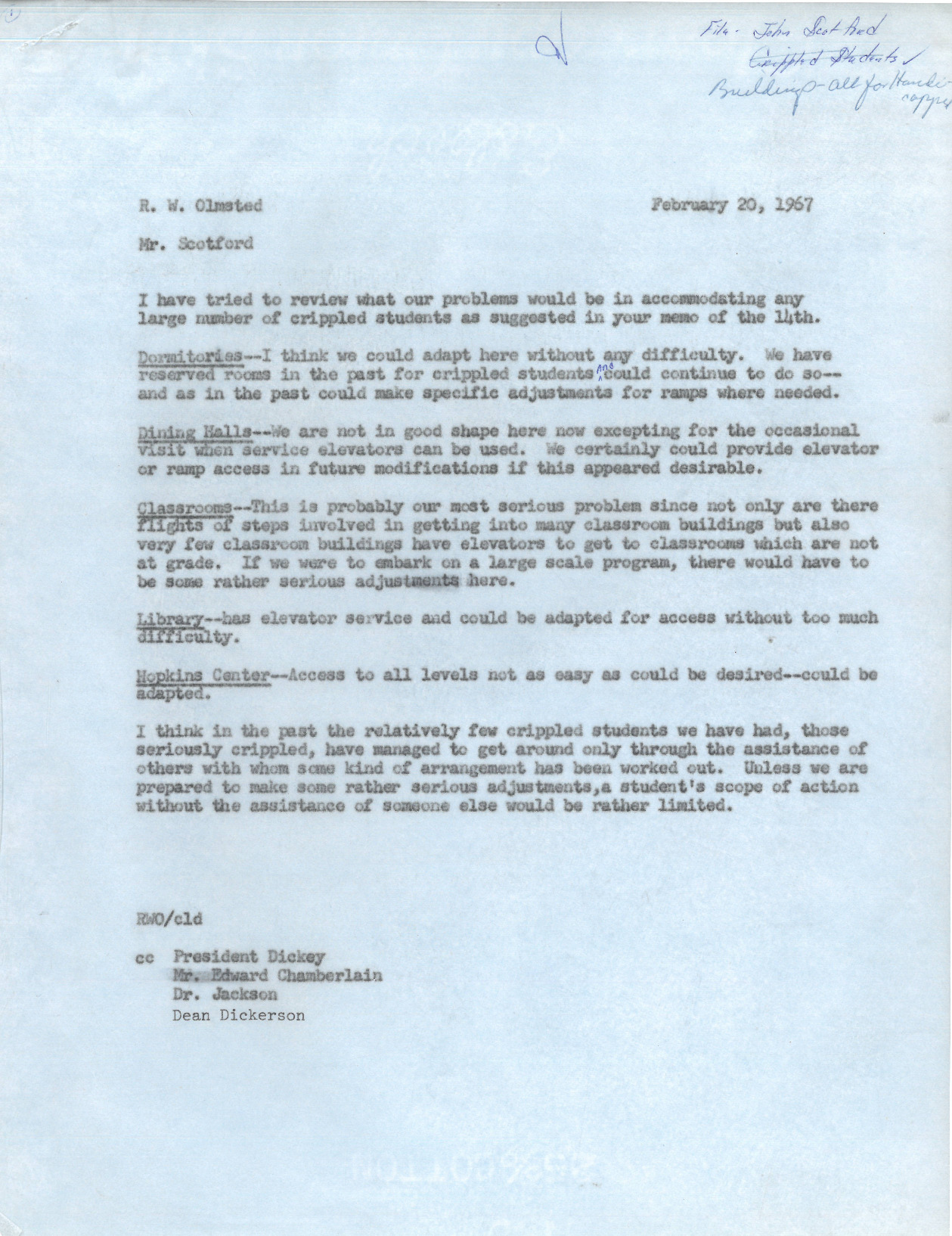 Business Manager Richard Olmsted's reply to John Scotford, in which he speaks to points of accommodation and existing accessibility problems for campus buildings, including dormitories, dining halls, classrooms, the library, and the Hopkins Center. 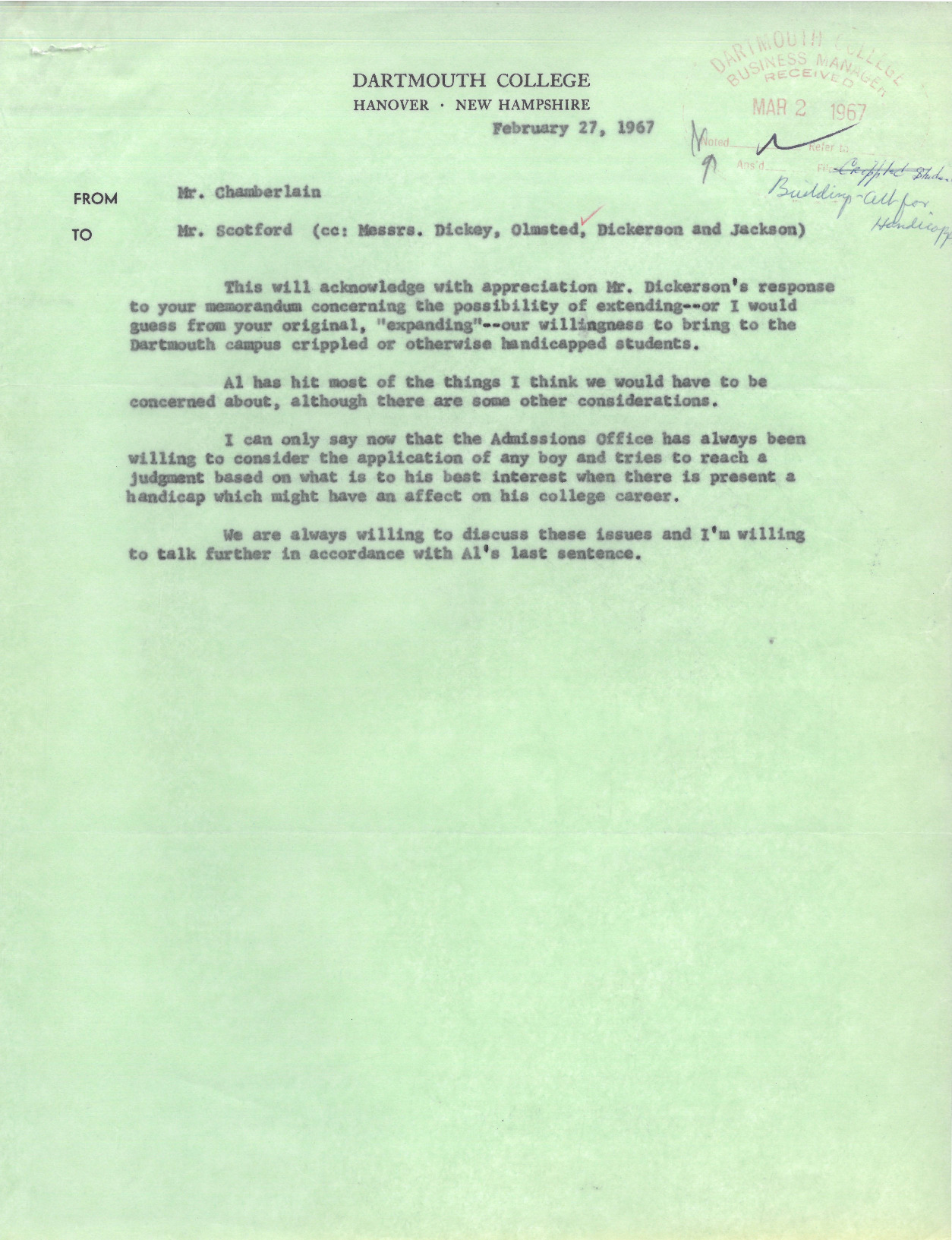 Edward T. Chamberlain  replies to Scotford’s memo and indicates that he mostly agrees with Al Dickerson’s earlier reply. He does add that “the Admissions Office has always been willing to consider the application of any boy and tries to reach a judgment based on what is to his best interest when there is present a handicap which might have an affect on his college career.” 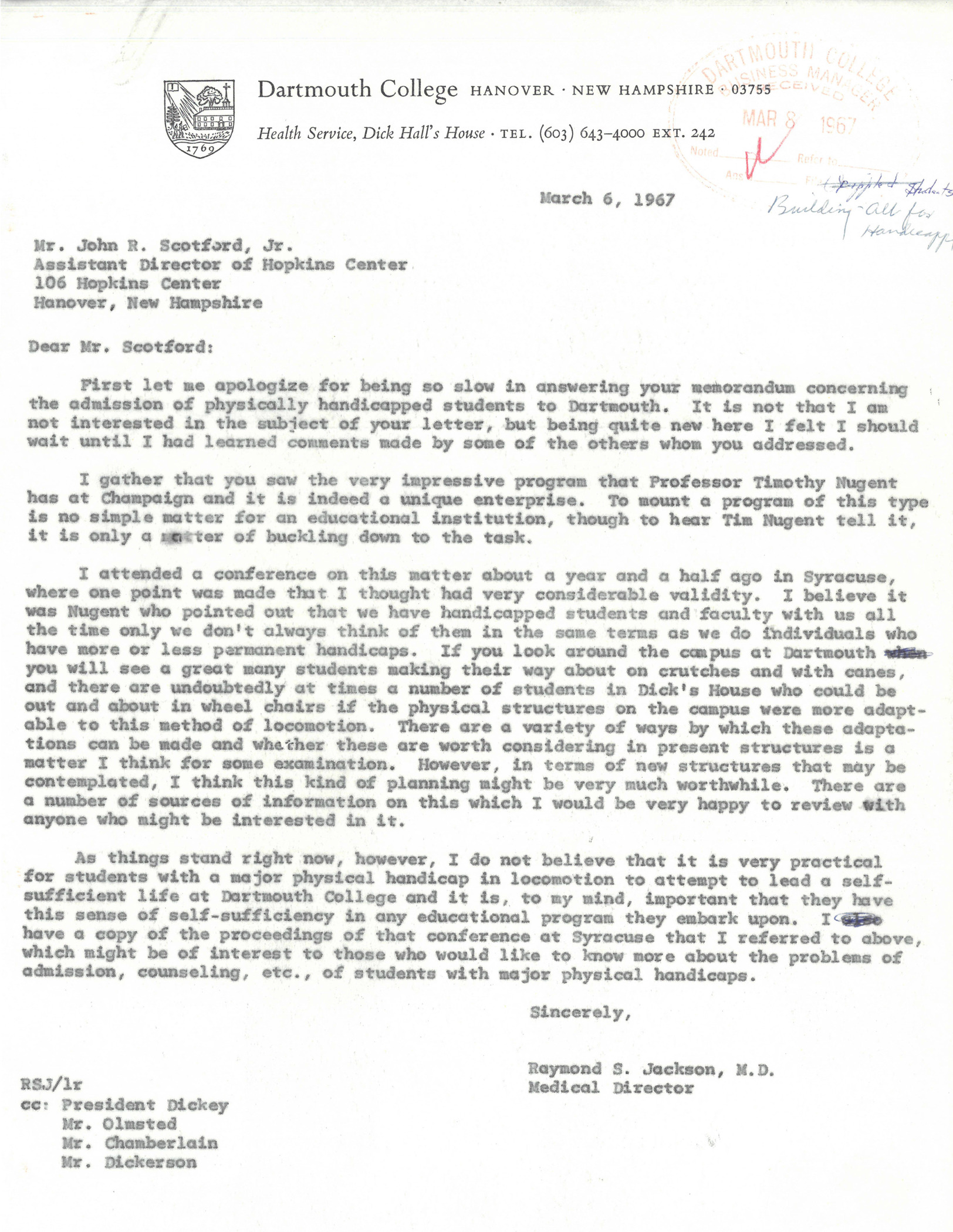 Memo from Dr. Raymond S. Jackson of Dick's House regarding a conference he attended and his ensuing thoughts on the subject of physically handicapped students at Dartmouth. He declares adaptations to be worthy of advanced planning but notes he does not think students with disabilities can lead self-sufficient lives at Dartmouth.