In 1977, the Rehabilitation Act of 1973 was amended to include Section 504, which extends civil rights to people with disabilities--one of the most important precursors to the Americans with Disabilities Act. The implementation of Section 504, overseen by the United States Department of Health, Education, and Welfare (HEW), required organizations all across the nation to make significant changes to internal policies and physical plants to accommodate disabled citizens. The codification of Section 504 compelled the College to make extensive changes to campus policy and facilities. A memo from August 30, 1976 outlines the College's main responsibilities to ensure compliance, namely:

The memo makes clear that the College would comply with the regulation to the best of its ability, although it predicts large financial and operational strain to complete necessary building alterations, meet personnel requirements, and establish the proper student support services. Unfortunately, the need to allocate College resources to address these federal demands led to early resistance by certain administrators, as evidenced by this memo's support of a lobbying effort to oppose Section 504. This resistance is further evidenced in a different memo from May 10, 1977, which expresses relief that a “young man who [Dartmouth] admitted who was handicapped and in a wheelchair for the class of 1981 is going to Northwestern,” and states that the College had been provided with “at least a one year reprieve” as a result.

By August 1977, handrails had been installed all around campus and modifications had been made to improve wheelchair access. While building renovations were already underway, President John G. Kemeny wrote to all members of the College to articulate the College’s now official outlook on the HEW regulations, a strong departure from statements in the August 30, 1976 memo. He instructed the newly formed Advisory Committee on the Handicapped to develop a transition plan, self-evaluation plan, and grievance procedure in line with Health, Education, and Welfare (HEW) regulations. Kemeny writes that members ought to make use of “creative imagination” in order to make programs accessible “at minimum cost... [due to] severely limited resources.”

On November 23, 1977, the Committee (alternatively referred to as a Council) met for the first time to discuss federal regulations, transition plan drafts, and the possibility of federal funds and education to assist with compliance. The Committee established that the Transition Plan would require an “inventory of physical barriers,” identifying a series of actions to be taken, establishing a timeline, and designating a coordinator for the Committee. This first meeting ends on an overwhelmingly positive note: the coordinator emphasizes that there is an “open place on [the] [C]ommittee for [a] disabled student.”  Later committees would more successfully incorporate the perspectives of those most affected these policies, but the College clearly recognized the importance of input from disabled members of the Dartmouth Community early on in the move towards accessibility. 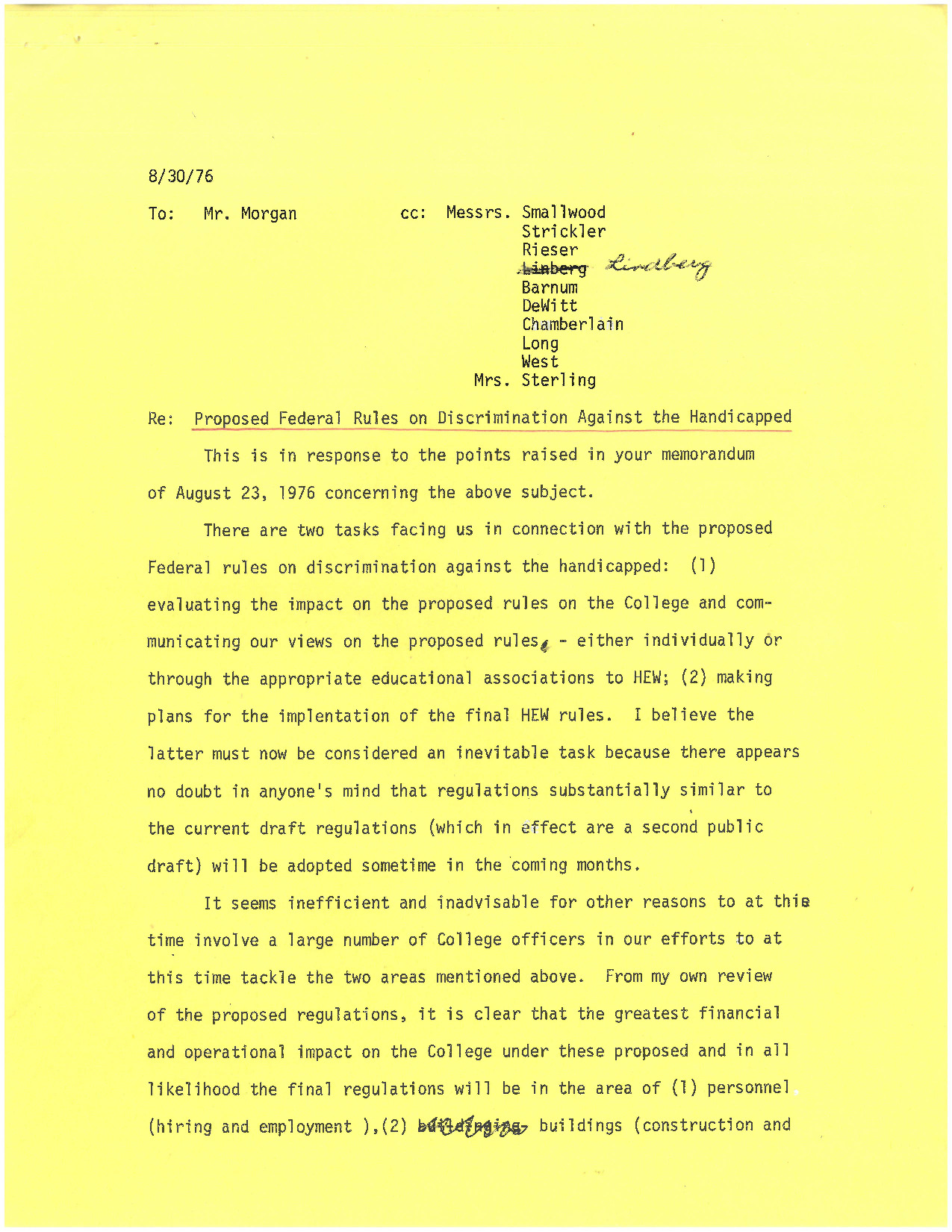 Memo outlining Dartmouth’s main responsibilities to ensure compliance with Section 504 of the Rehabilitation Act of 1973. The memo further explains the basis on which the American Council on Education (ACE) is challenging the legislation, and recommends that the College show its support for ACE’s criticisms. 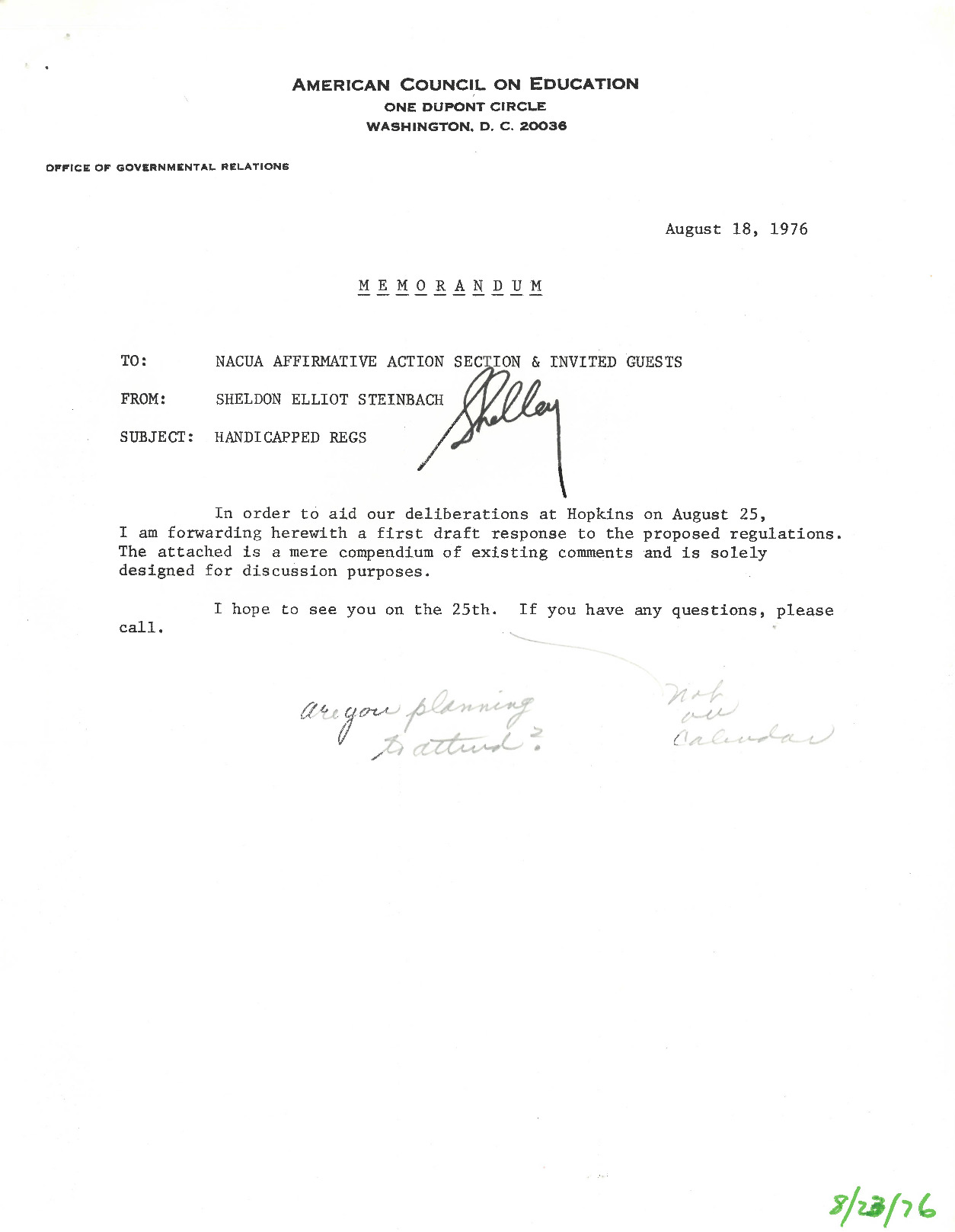 An attachment to an August 18, 1976 memo from Sheldon Steinbach to the National Association of College and University Attorneys (NACUA) Affirmative Action Section. This letter is working discussion draft of the American Council on Education (ACE)’s letter to Mr. Martin Gerry, a lawyer in the Office for Civil Rights in the Department of Health, Education, and Welfare (HEW). 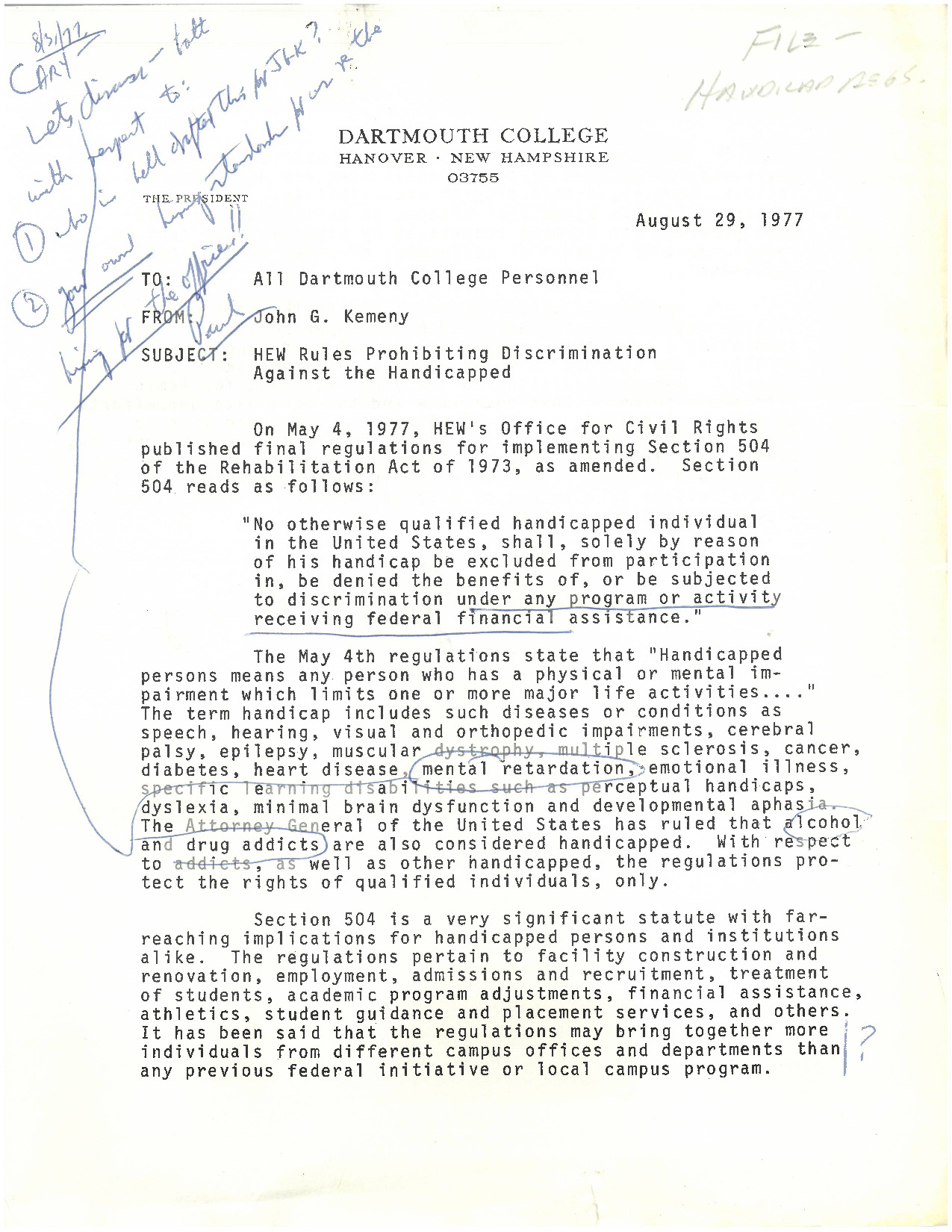 President John G. Kemeny writes to all members of the College to reiterate the College’s now official outlook on the Health, Education, and Welfare (HEW) regulations, a strong departure from the statement in a more private memo from August 30, 1976. Like many other documents that sidestep equal access to campus facilities, the letter cites the age of the institution as the main barrier to full compliance with HEW regulations. 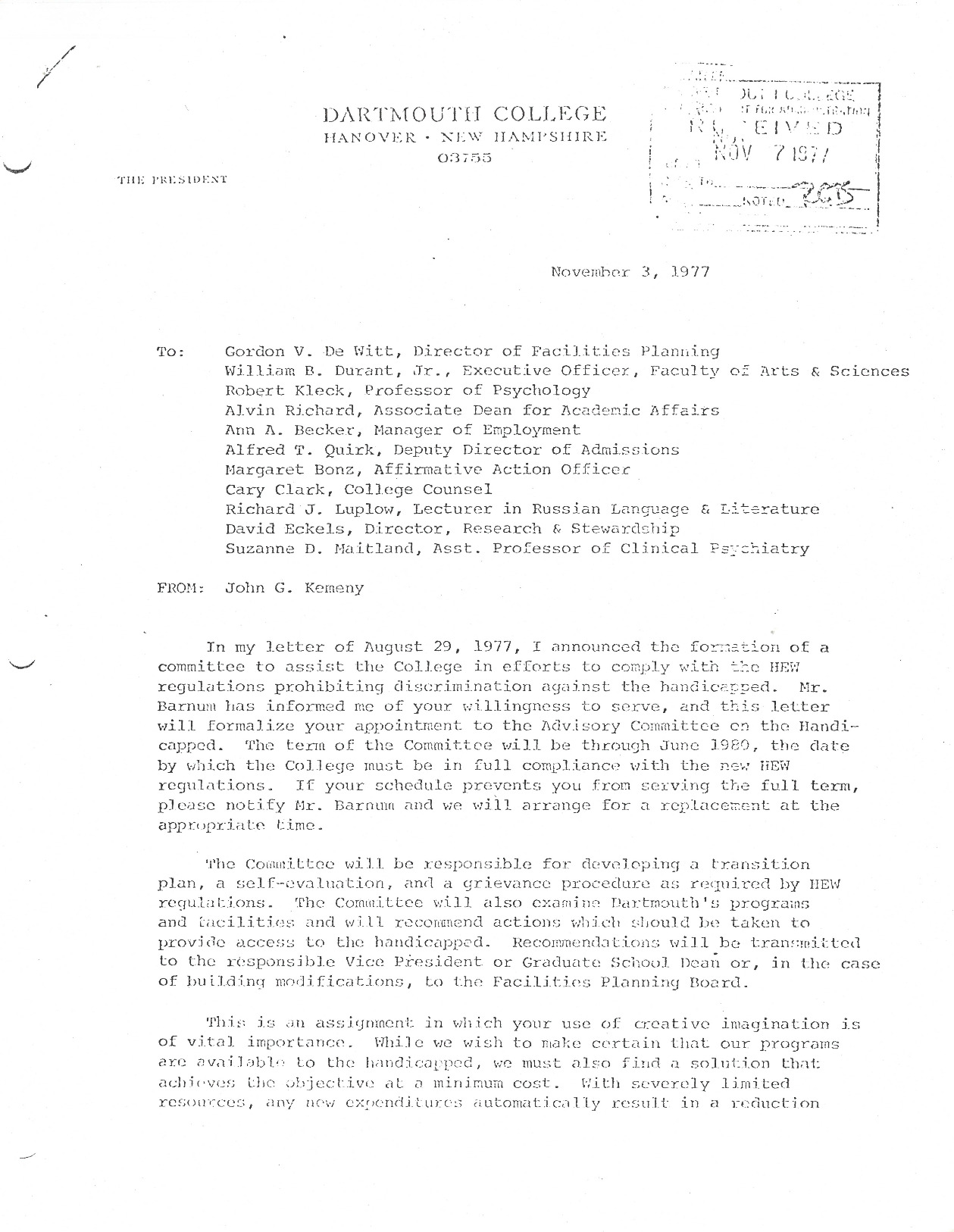 Memo sent to the appointed members of the Advisory Council on the Handicapped that instructs the Council to develop a transition plan, self-evaluation plan, and grievance procedure in line with Health, Education, and Welfare (HEW) regulations. President Kemeny makes note of the difficult task facing the Council, and recommends thinking creatively in order to make accommodations at minimal cost. 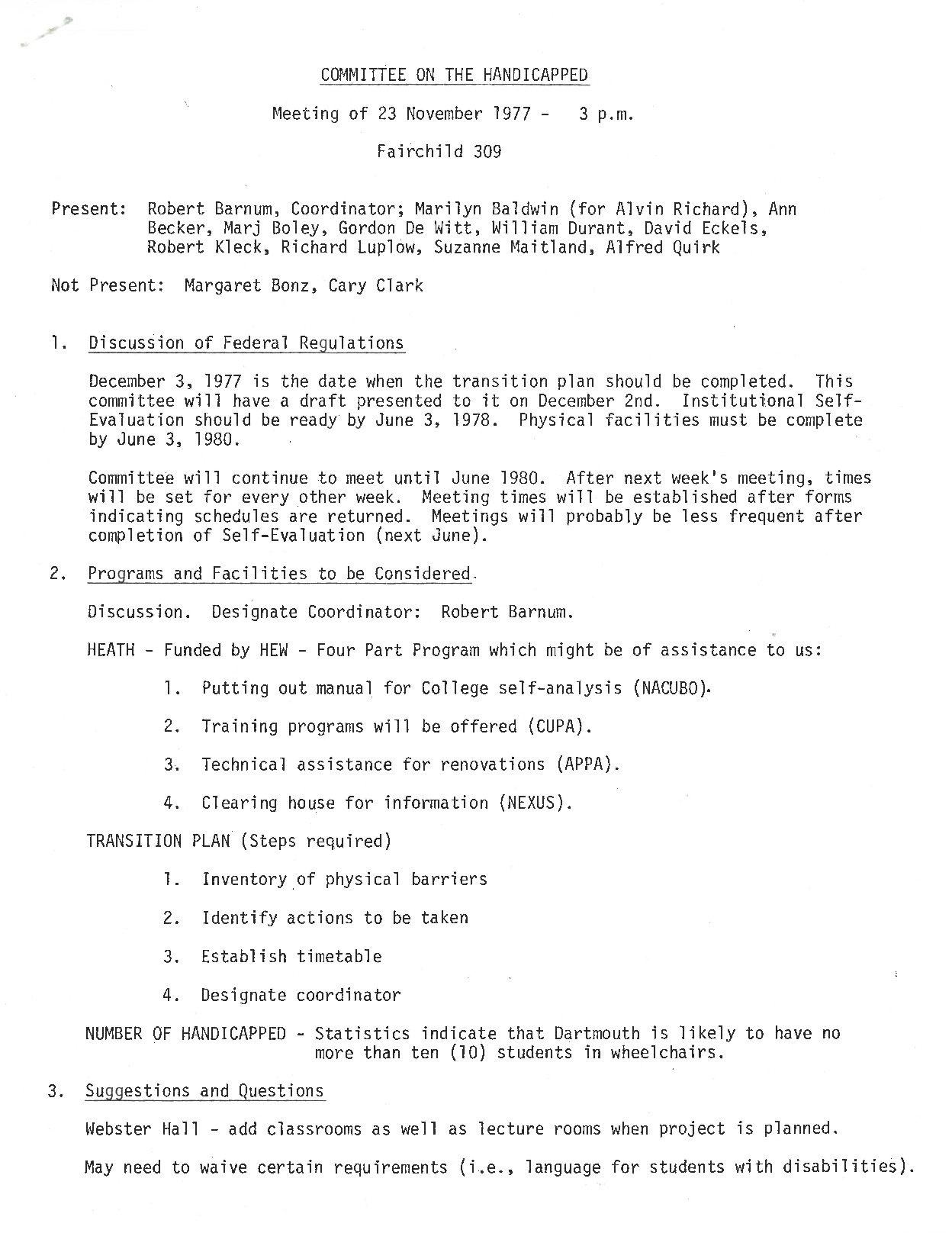 Meeting minutes for the first meeting of the Advisory Committee on the Handicapped. Robert G. Barnum is appointed as the committee’s coordinator for campus programs and facilities. The meeting closes with the comment that the committee has room for a disabled student to provide perspective and insight. 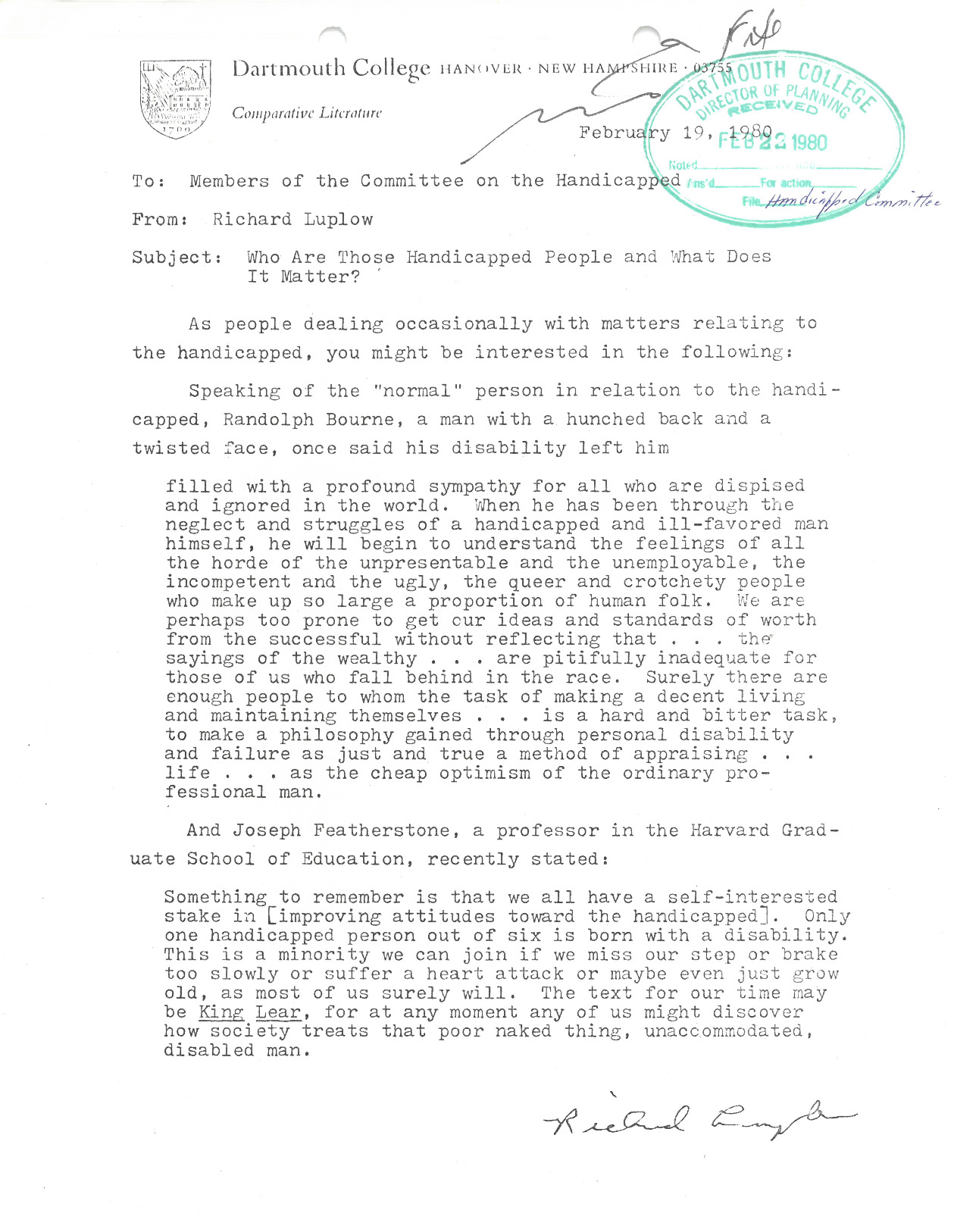 This memo from Richard Luplow quotes two individuals on improving attitudes towards the disabled. As one of the two members on Advisory Committee who used a wheelchair, it is possible that Luplow wanted to make his fellow committee members aware of different disabled experiences than just his own perspective.