The year 1972 not only brought coeducation to Dartmouth, but also the establishment of the first historically black fraternity on campus: Alpha Phi Alpha. Alpha Phi Alpha’s history at Dartmouth is documented mostly through articles in The Dartmouth, and their time on campus in the 1970s and ’80s is rife with instances of difficulty and a struggle to be accepted by the Dartmouth community.

Alpha Phi Alpha’s presence on Dartmouth’s campus began in the spring term of 1971. A Dartmouth graduate student at the time was introduced to the historically black fraternity by his older brother, who was a member of Alpha Phi Alpha’s Sigma chapter at Boston University. On campus, the graduate student talked with undergraduate students to build interest, and gained commitment from six men. The National offices granted the group permission to begin a pledge program for the following fall, in which the men drove to Boston every weekend to complete the pledge process. They were all initiated into the fraternity during the winter term of 1972, and Dartmouth was officially granted a charter to form the Theta Zeta chapter. 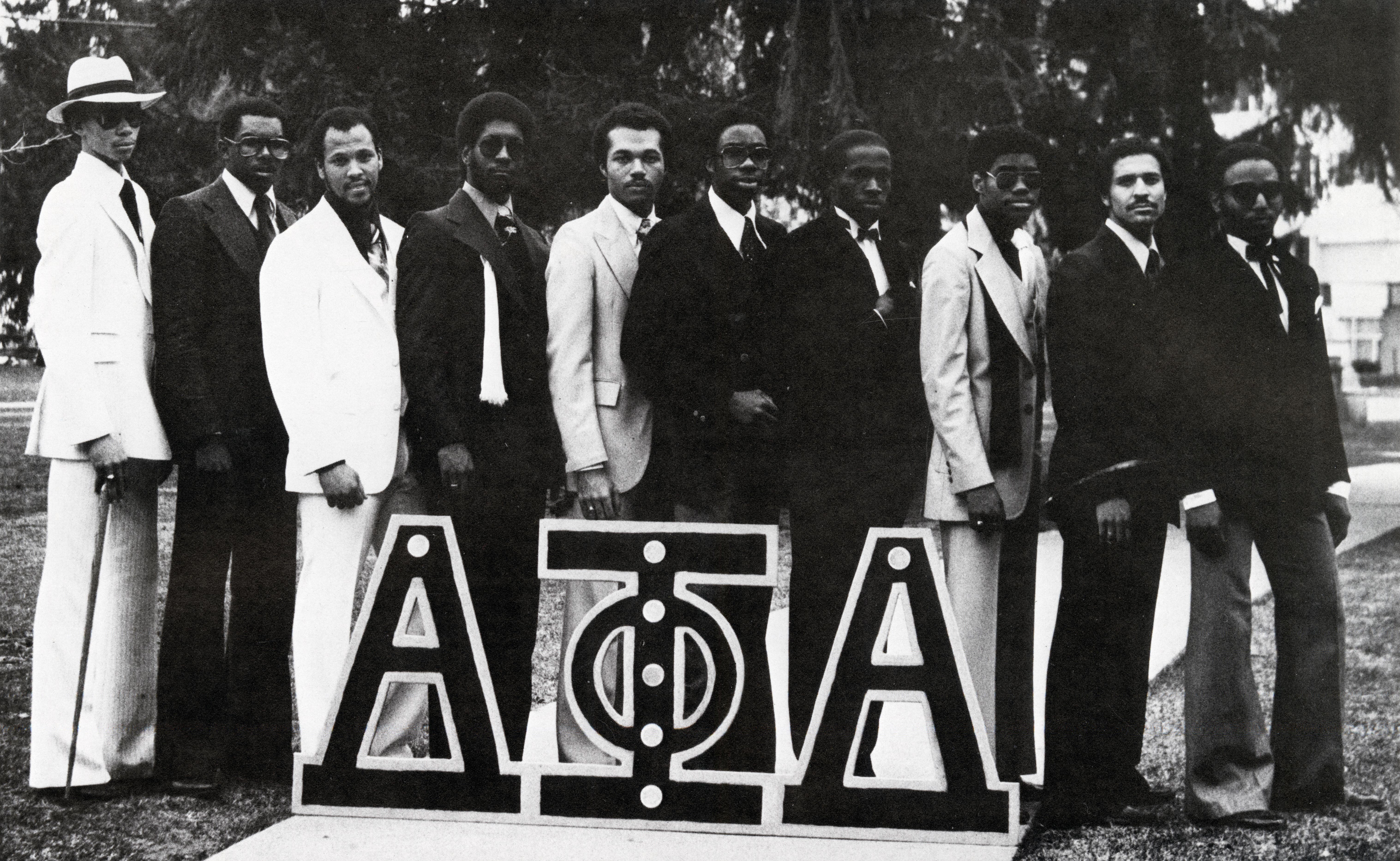 Alpha Phi Alpha in the Aegis

The fraternity petitioned the IFC in May 1973 for recognition. In their petition, the chapter stated all interested students were eligible for membership, regardless of race, as the national fraternity went interracial in 1945 despite Alpha Phi Alpha being a historically African-American fraternity. Their charter claimed their purpose was for “manly deeds, scholarship, and love for all mankind.” The chapter also articulated their desire to be seen as much more than “a purely social-entity,” hoping instead to be seen as a place for academic excellence through activities such as a mandatory two-hour group study session every night. The chapter had 23 members at the end of spring term 1973, and bought their first house in 1982.

Alpha Phi Alpha’s president in 1984, Mattie Lopes ’84, said “Alpha’s battle for acceptance and recognition here at Dartmouth has been difficult,” and cites a number of incidents as evidence. In 1979, the college destroyed an Alpha Phi Alpha sculpture that depicted negroes in chains. Later the same year, a sculpture at the center of the green was defaced, and Alpha Phi Alpha received all the blame. Lopes also said the fraternity was given an unfair separatist image by other students, most notably by the editor-in-chief of The Dartmouth Review, who claimed in an editorial that race was the determining factor for admission into the fraternity. The college’s Interracial Concerns Committee held a meeting to discuss Black fraternities and sororities on Dartmouth’s campus, but none of the Black fraternities or sororities present were invited to the meeting. Lastly, in 1982, a white male attempted to rush Alpha Phi Alpha, but removed himself from the process after receiving anonymous death threats from members of the Dartmouth community. While the Dartmouth IFC no longer recognizes the chapter, the fraternity is still in operation on campus as a member of the National Pan-Hellenic Council. 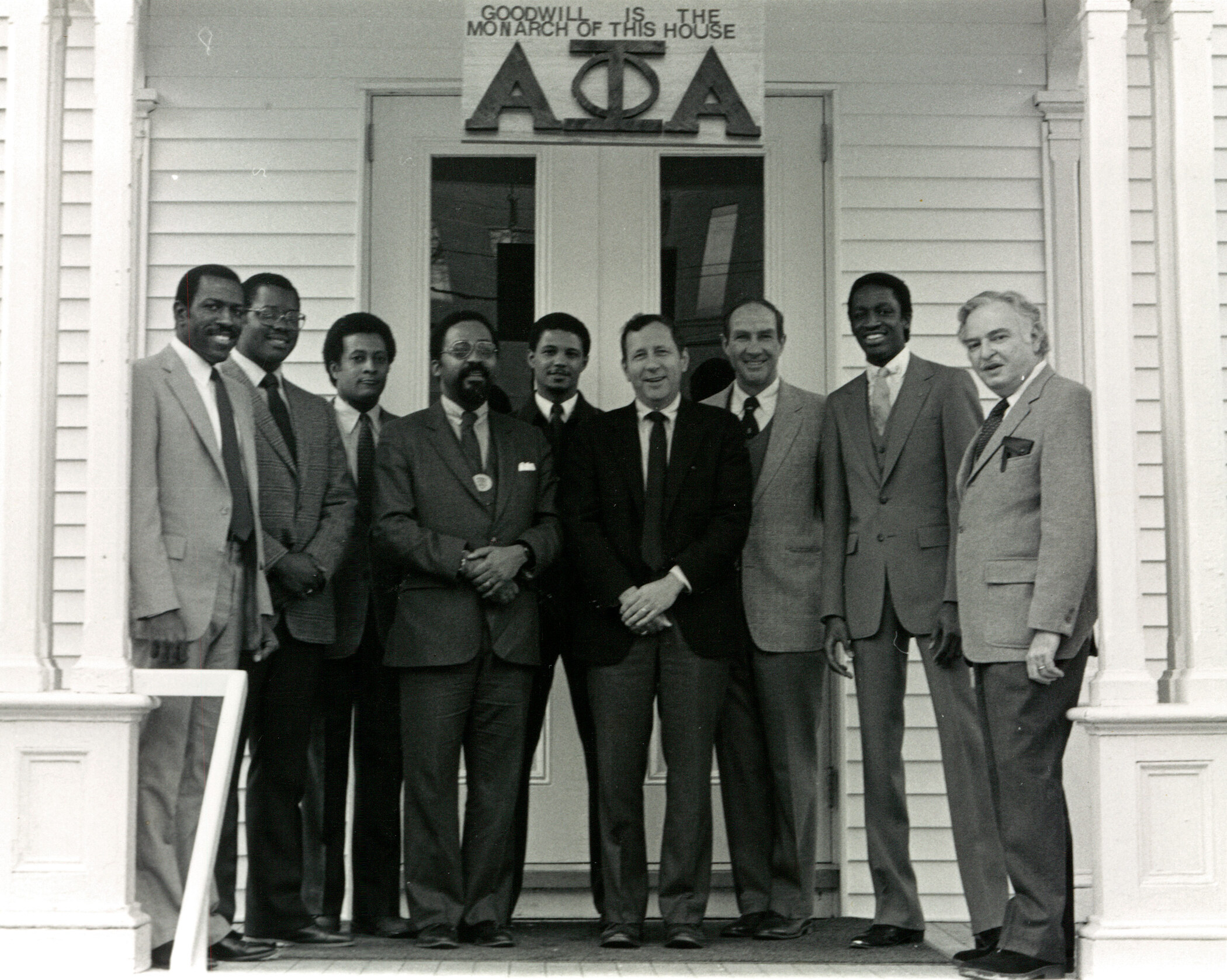 Photograph of the Alpha Phi Alpha brothers standing in front of their new house with President Kemeny. 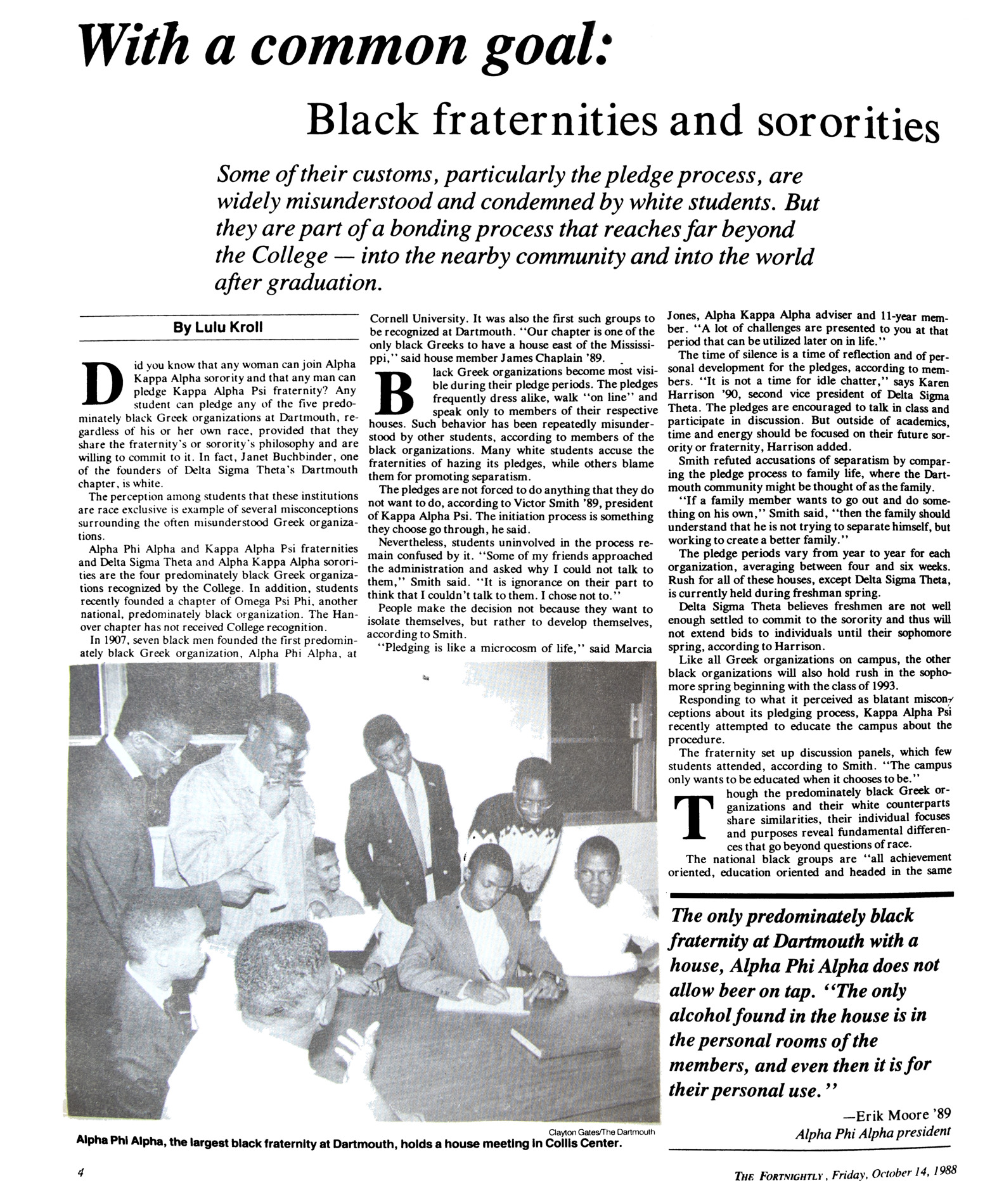 Article in The Dartmouth featuring an image of Alpha Phi Alpha brothers in a 1988 meeting. 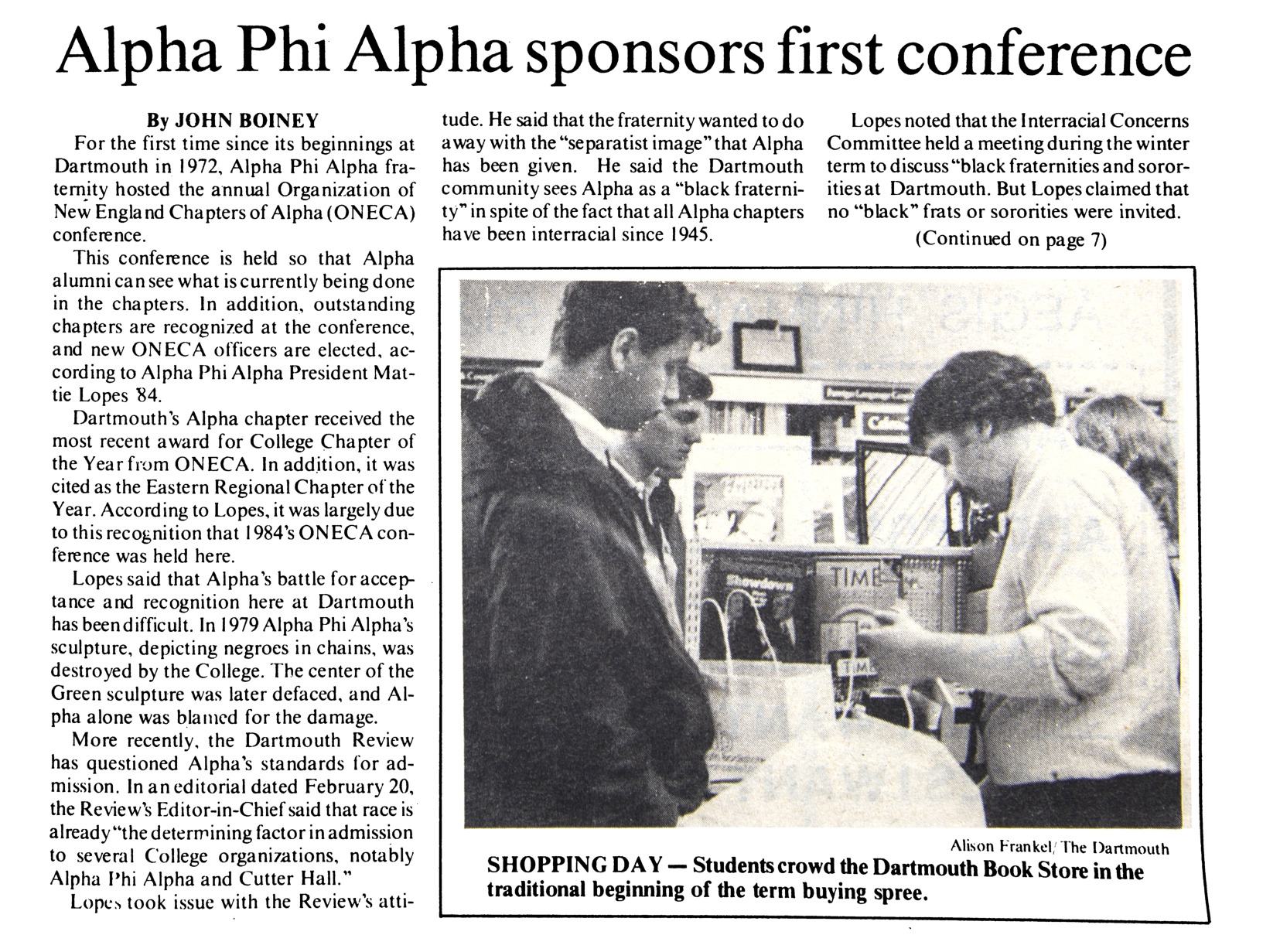 Article describes the hardships faced by Alpha Phi Alpha at Dartmouth, especially in their fight to be accepted on campus.