The final installment in the three-part poster series was a piece that directly allowed me to comment on the current landscape of Dartmouth student liberatory protesting. In its construction, my historical timeline is completed with a visual commentary on the modern framework of student protest mobilization and the role of technology and the data archives in recording the present and informing Dartmouth’s future. Focusing on an extended time period of 1989 to the present, its visual content includes three duplicated images of a 1992 wall of protest flyers calling for student mobilizing after the Rodney King verdict; featured on the two sides of the poster is an iconic representation of the transition of archival manuscript collections from physical to digital files.

The visual theme of this poster expresses the patchwork nature of liberatory protesting methodologies that are highlighted and exemplified in the physical and digitized representations of protest art—art and design works whose formal utility is realized in its accessibility and ease in being an artistic medium for information dissemination. This piece highlights its technological influence by merging the textile design and digitally overlayed imagery to explore the unified significance of the digital archives on historical accountability and collection. Atop this transitory visual timeline are duplicated photographs of flyers for the Enough is Enough rally against police brutality as a standing and highlighted symbol of the powers of digitization and the permeation of liberative protesting against police-state violence in the modern organizing environment. My research pushed me to expand my definition of protest art to include mediums like protest flyers and reading lists beside the likes of protest signs due their contemporary use in liberatory thought, organizing and art movements. This inclusion represented a transformation of my perspective on art’s thematic integration into the socio-political conscience, a legacy that provides Dartmouth students with an instrumental tool for mobilizing and sharing information within the digital age. 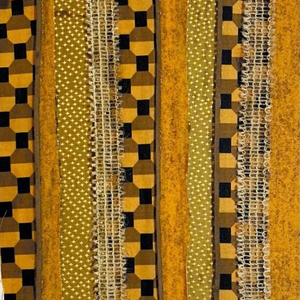 The textile design for the third poster used materials from previous installments to integrate within a novel design, structural components of previous time periods in an effort to form additive, thematic meaning in the structuring of present protesting styles. Long straight slivers of graphically divergent fabric are layered to form vertical lines, visually similar to the parallel points on a timeline that denote a transitory passage of time. This handmade and scanned construction stands in contrast to the digitized and duplicated flyers in the poster’s foreground. This dissonance was intentional to bring attention to the nature of digitized manuscripts, whose form as a duplicatable and modifiable entity become essential to its utility as a method of information sharing, commentary and global dissemination with modern social media technologies.

With the combination of the vertically lined background and digital graphics, a liminal space is created between the left and right sides that is only transcended by the wall of protest flyers. The bond between the past and present is preserved in the archival institution and its technological evolution that coexists with the legacy of liberatory student protesters. Parallel to the poster design is the accessibility and shielding power of the digital archives to uphold the protection of manuscripts for future researchers and onlookers alike to know this legacy. To learn from it and pass the torch.