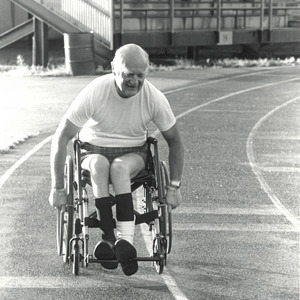 David T. Eckels, Class of 1944, returned to Dartmouth as a development officer in 1966. Two years later, Eckels underwent spinal surgery and began to use a wheelchair. Thanks to his fierce advocacy and membership on Hanover’s Disabled Accessibility Advisory Committee, as well as Dartmouth’s Handicapped Committee and 504/ADA and Design Review Committee, Eckels became one of the single most influential advocates for accessibility both on campus and the town of Hanover for several decades.

Eckels not only took initiative to obtain funding from his graduating class for accessibility renovations on campus and performed many “wheelthroughs” of campus to better inform the committees on which he served, but was also willing to share his experiences as a wheelchair user at Dartmouth with anyone who might listen--from admitted students, to staff in the Facilities Planning Office, to the Chairman of the Dartmouth College Board of Trustees. A man known for his candor, a few of these exchanges recorded in the College archives have been made available below. The documents themselves paint a more vivid picture of Eckels than any quick description.

Eckels passed away in 1999 but will be remembered for his unmistakable resolve in fighting to make Dartmouth and Hanover, NH accessible to everyone in a time when alterations for accessibility were seen as wasteful, ugly, and unnecessarily bureaucratic. Remember Eckels each and every time you use an elevator on Dartmouth’s campus; whenever you see a blue and white accessibility sign; and constantly in the winter when ramps and walkways are inadequately plowed. 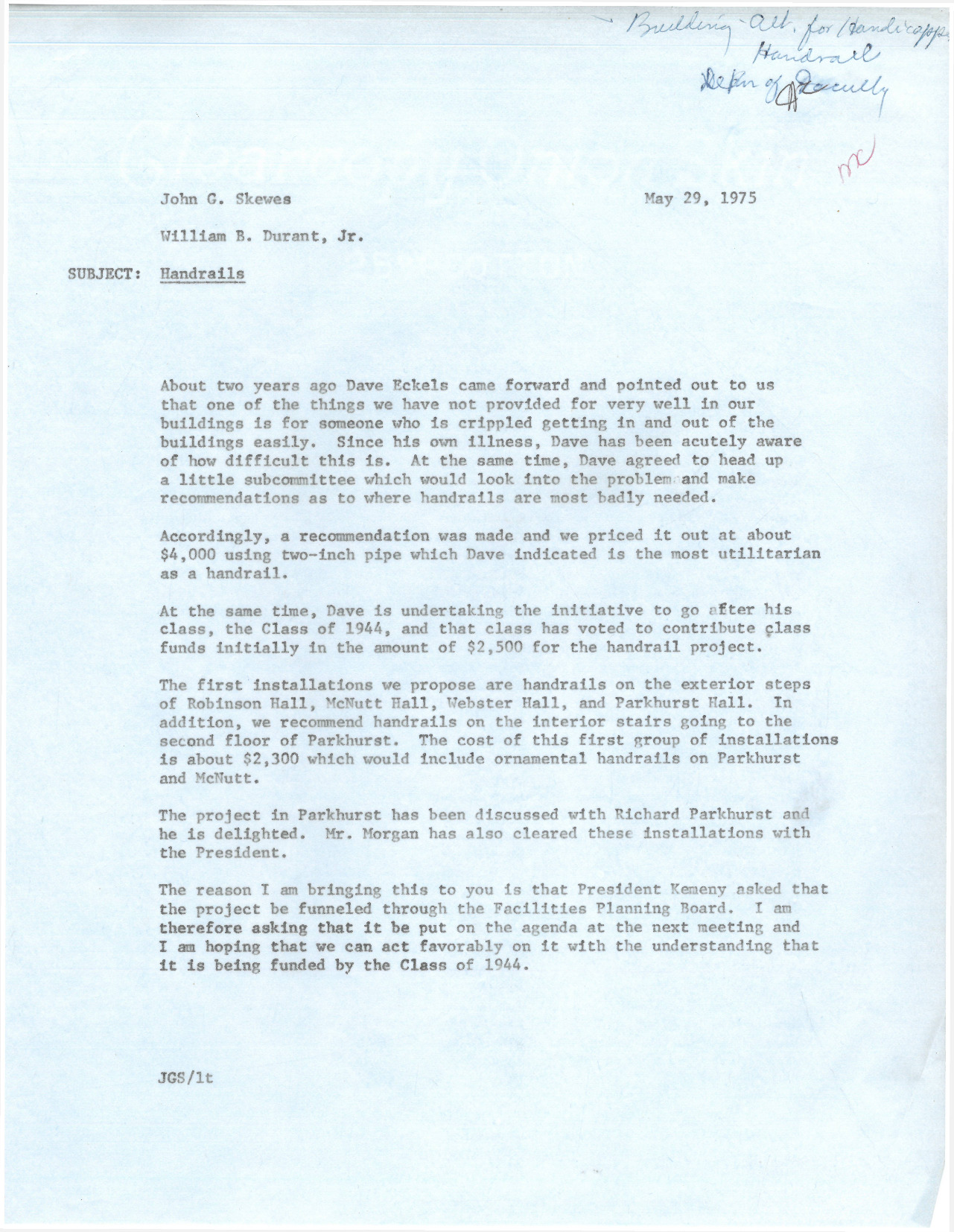 An exchange between members of the Facilities Planning Board regarding the installation of handrails in key locations across campus. Dave Eckels not only brought the issue to the attention of facilities staff, but served on a committee to determine where handrails were most needed and sought funding from his graduating class to make the handrail installation possible. 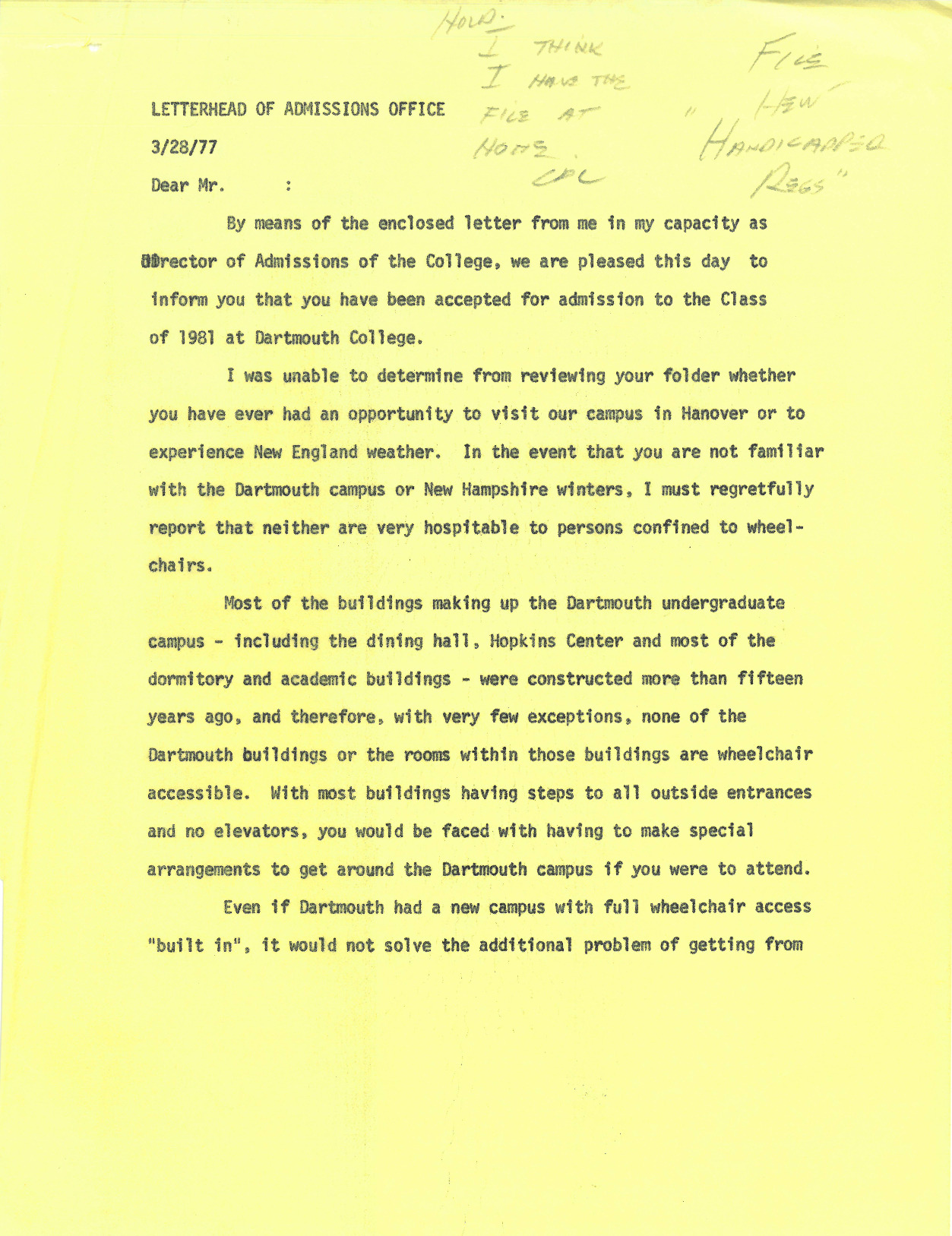 A letter from the Director of Admissions to an admitted student to the Class of 1981, in which he encourages the student to contact Dave Eckels for perspective on the disabled experience at Dartmouth. The letter's recipient is likely the same student who decided to attend Northwestern, thereby giving the College “at least a one year reprieve.” 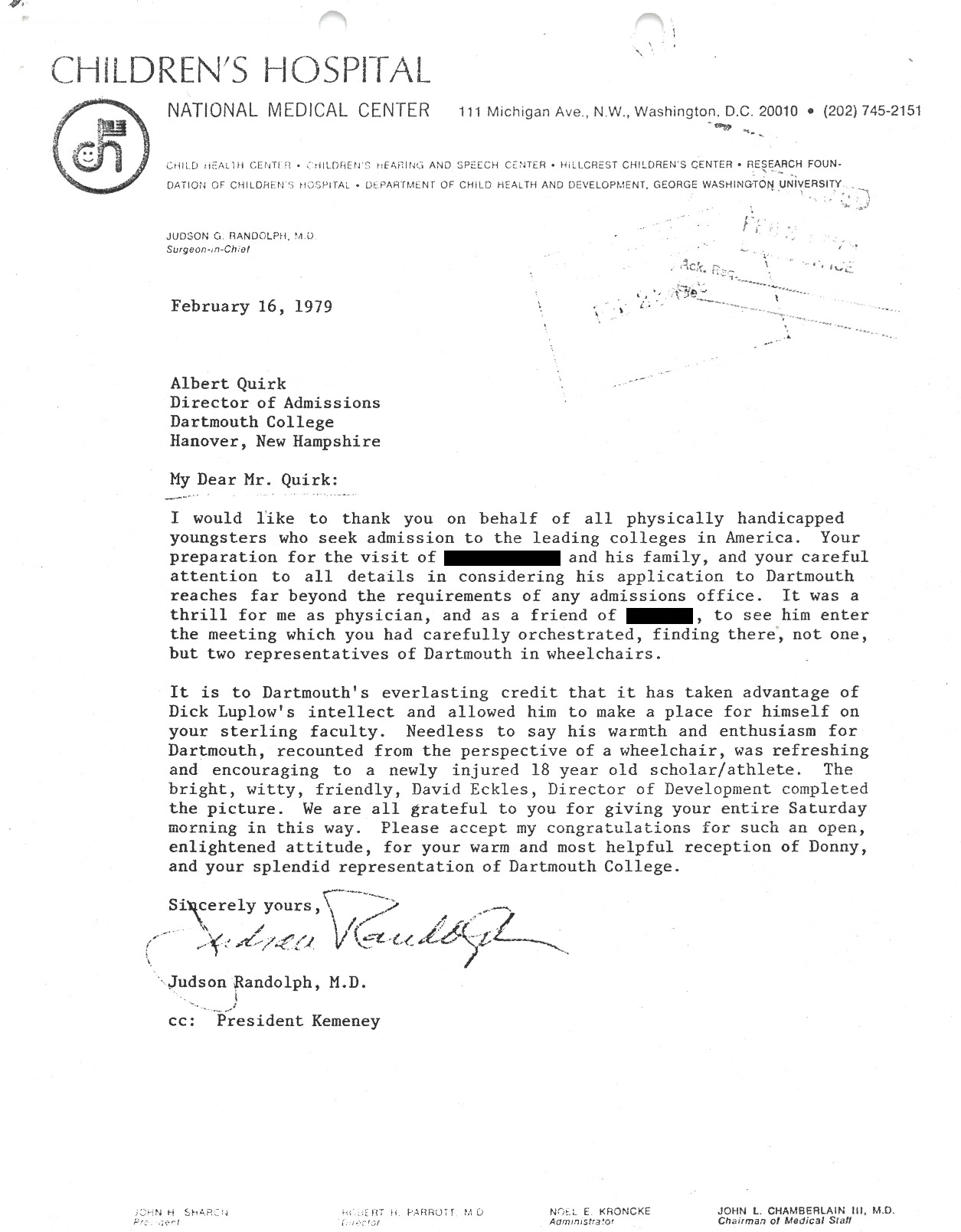 A letter from the doctor of an admitted student to the Class of 1983 expressing delight “to see him enter the meeting which the Director of Admissions had carefully orchestrated, finding there, not one, but two representatives of Dartmouth in wheelchairs.” The Dartmouth representatives were Richard Luplow and David Eckels. 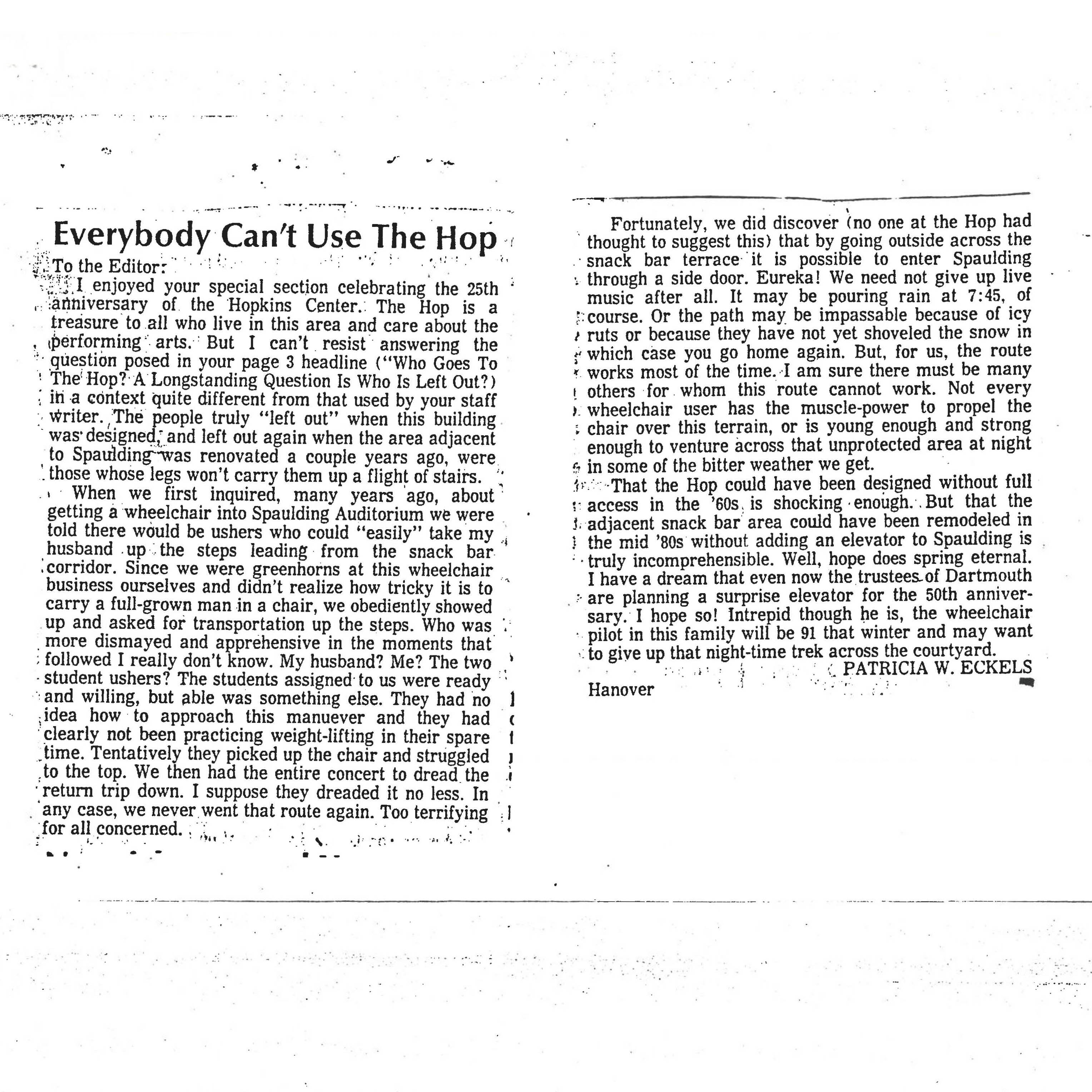 A newspaper clipping in which Patricia W. Eckels outlines the accessibility issues at the Hopkins Center for the Arts. In her concluding remarks, she writes, “That the Hop could have been designed without full access in the '60s is shocking enough. But that the adjacent snack bar area could have been remodeled in the mid '80s without adding an elevator to Spaulding is truly incomprehensible.” 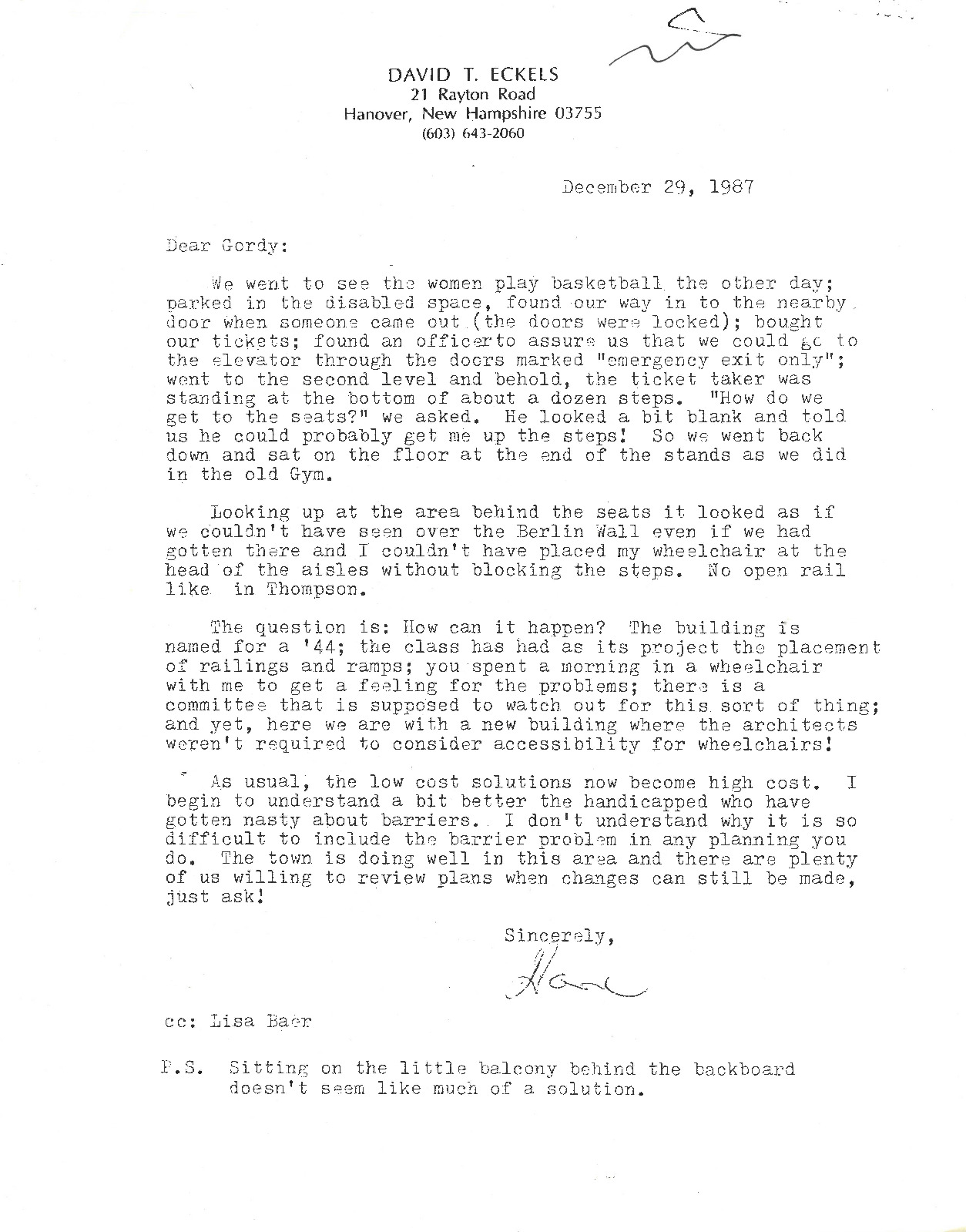 A letter from Eckels to Gordon DeWitt, recounting his negative experience attending a Women’s Basketball game on campus due to accessibility issues. 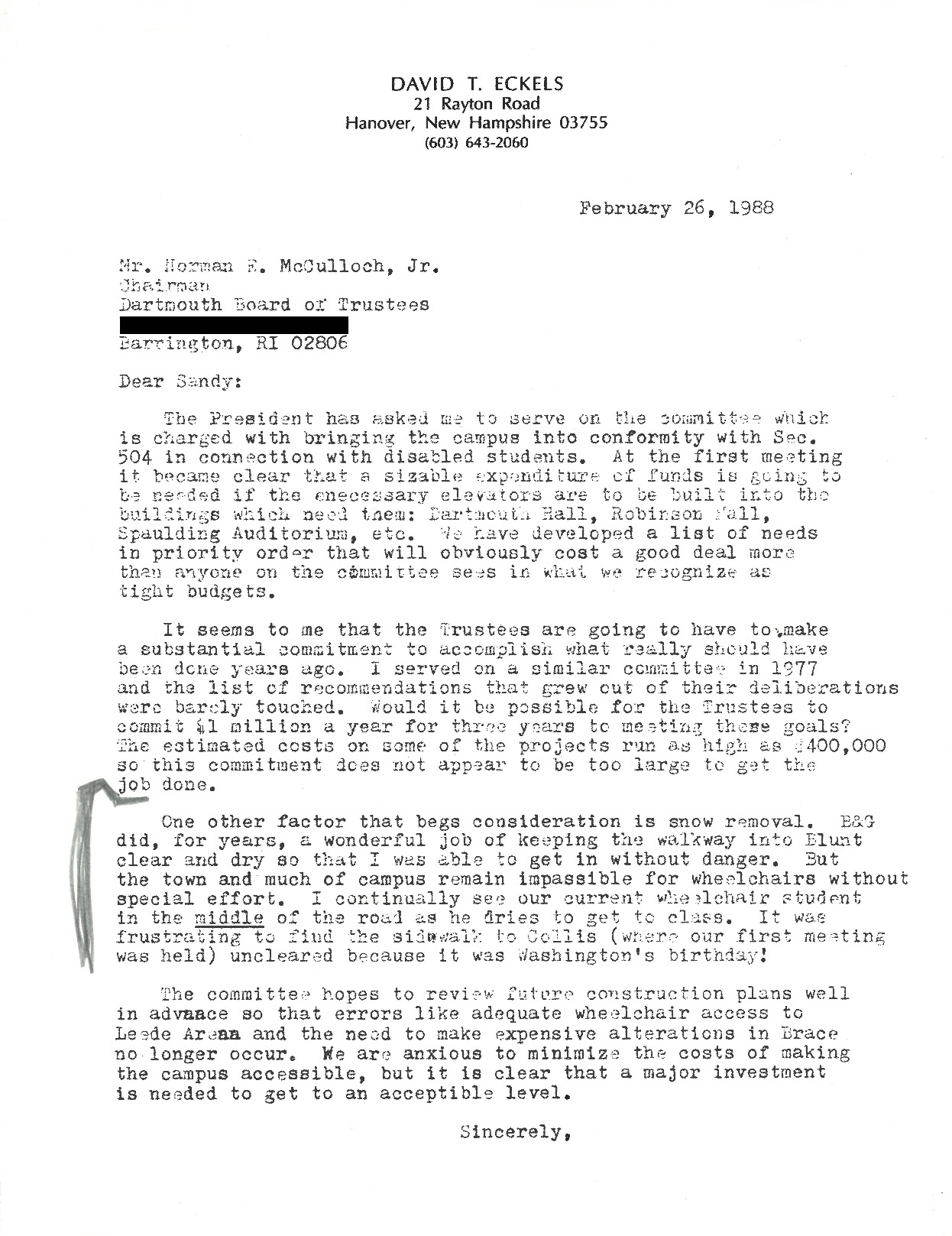 A letter to the Chairman of the Board of Trustees written shortly after Eckels joined the Section 504 Committee, in which he explains that “the Trustees are going to have to make a substantial commitment to accomplish what really should have been done years ago.” 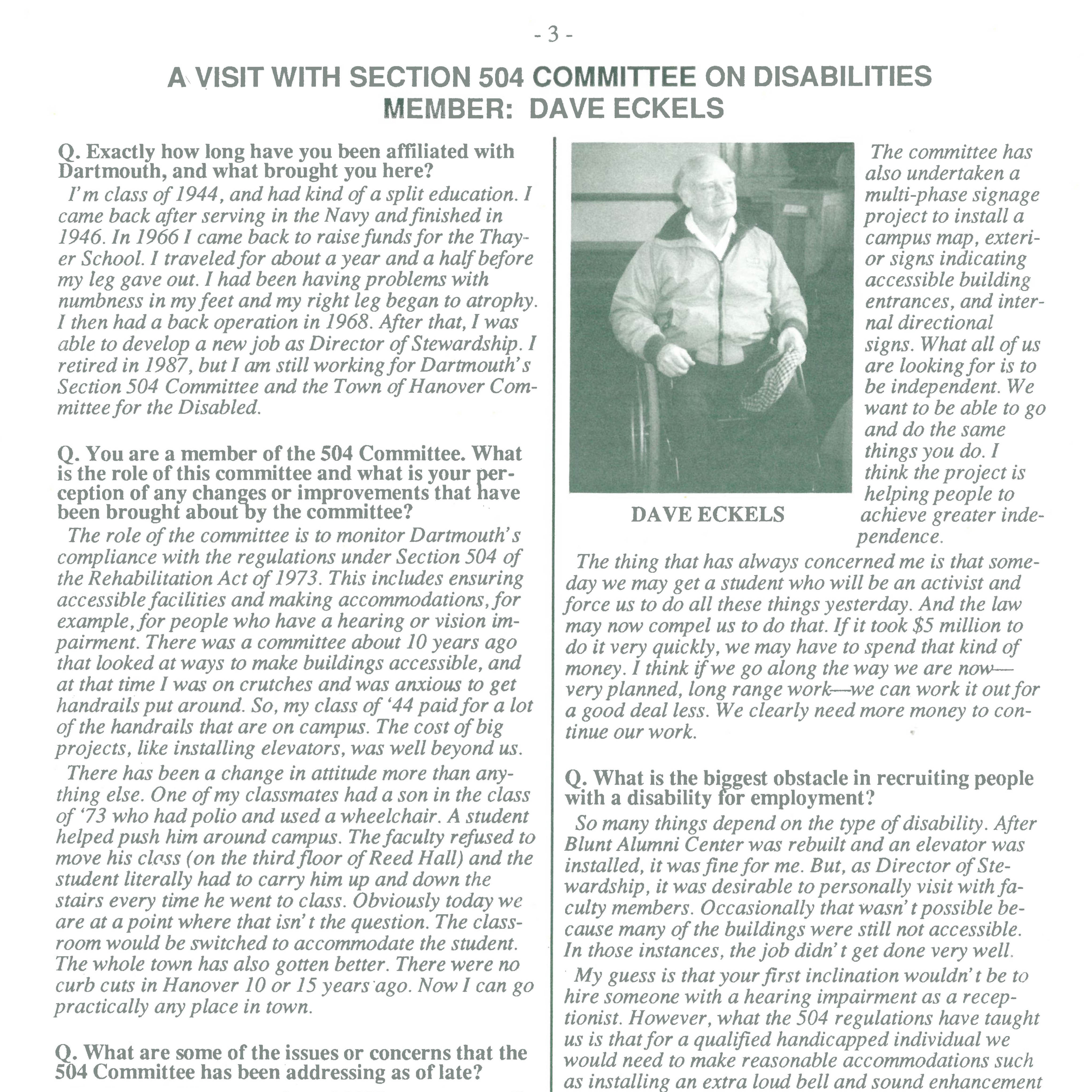 An interview with Eckels in his capacity as a member of the Section 504 Committee. 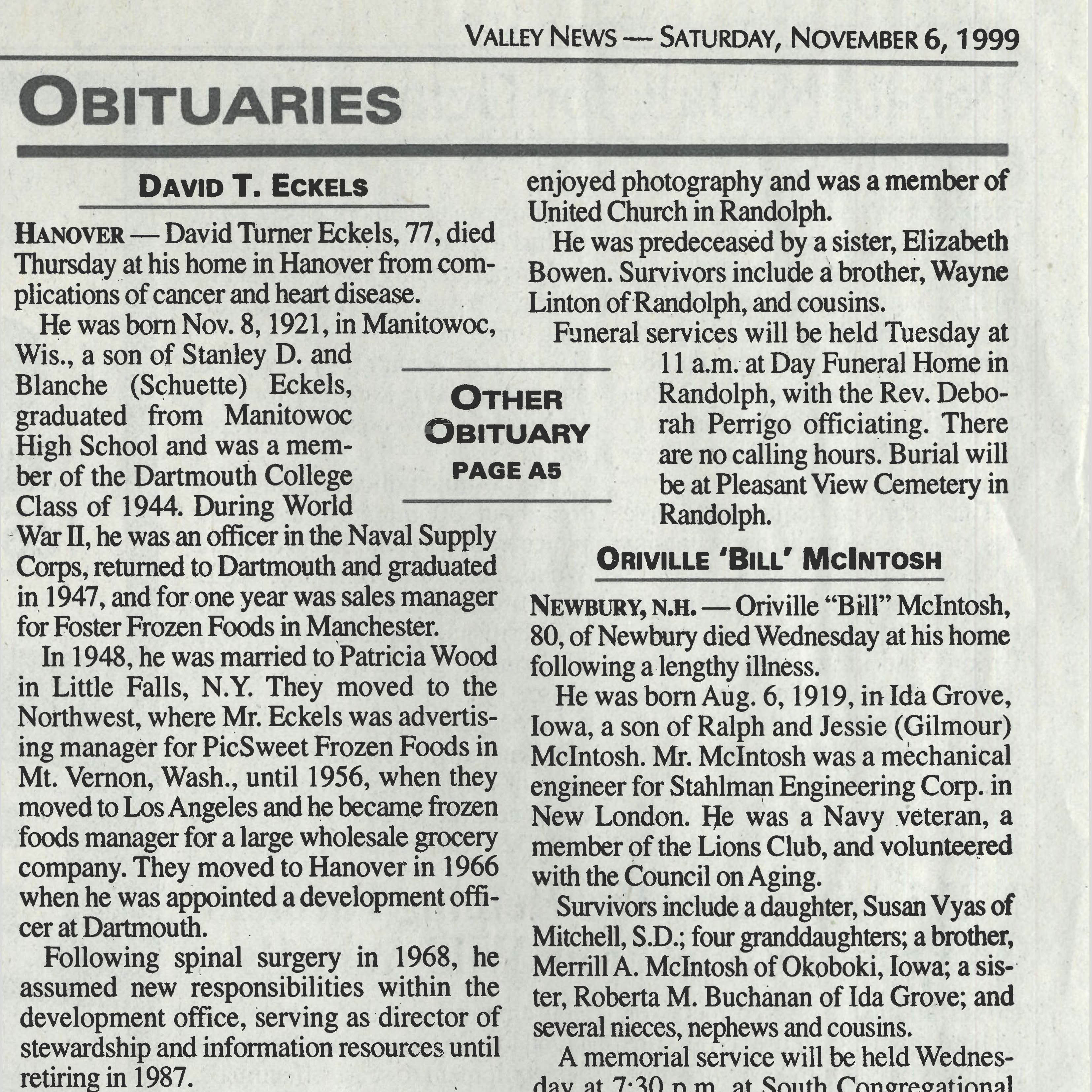 An obituary for Dave Eckels published in the Valley News.