“However, the matronly connotation soon seemed too staid for the gay doings of the club in the interest of the scholarship fund.”

The term “matron” would eventually be cast aside, although the women involved were all originally Dartmouth wives and mothers. Several reasons were given for the name change, but the prevailing opinion suggests that they wished to discard any uptight or overly serious connotations. A club profile argued that “the name seemed too staid for the lively auxiliary,” a sentiment which is echoed in the preface of Favorite Dartmouth Recipes: “However, the matronly connotation soon seemed too staid for the gay doings of the club in the interest of the scholarship fund.” Clearly, the women wanted to be remembered as energetic and fun. Mary A. Carlisle, the author of the preface, still qualifies her statement by saying the name change was all for the sake of making their scholarship fund more appealing to donors, rather than to reflect the personalities of the club members.

However, the DWC had no issues with fundraising success and recognition. Despite the ongoing Great Depression, the club made strides to elevate its profile in 1930 by creating a scholarship for a Dartmouth student to study abroad in Geneva, Switzerland. This designation was likely chosen because Geneva was central to world affairs at the time, so the scholarship provided way for these women to feel a connection with international politics and power. (After World War II, the scholarship parameters became unrestricted.) Perhaps as a result of their fundraising success, the College formally recognized the club in 1931, when membership was given a gavel made from the Old Pine during their first regular meeting. Thirty years later, the Dartmouth Alumni Council voted to give the club “alumnae” status, although none its members had never graduated from the College by 1961.

Since the Geneva scholarship, the money raised by the DWC through various events and projects has gone to financial aid. By 1966, they estimated that over $30,000 had been raised for loans and scholarships, which would be approximately $243,500 in 2021. Favorite Dartmouth Recipes alternatively states that the DWC had raised nearly $60,000 for loans and scholarships, which would be close to $487,000 in 2021. Regardless of the exact amount, the DWC raised considerable amounts of scholarship money for Dartmouth men, which gave the women some influence in the future of Dartmouth’s undergraduate community.

Although all the women of the DWC derived their Dartmouth connection from Dartmouth men and they occasionally invited prominent Dartmouth men, such as President Dickey, to speak, the club ultimately prioritized women’s voices. At the several DWC “Celebrity Luncheons,” the club honored “Dartmouth wives who had attain distinction on their own,” including women judges, musicians, authors, and more. While the scholarship fund has endured and can be said to be central to club activities, the DWC’s mission “promote sociability and friendship among the women of the Dartmouth family,” has always emphasized community. The scholarship appears to have satisfied a greater need among Dartmouth women—the desire for a female-dominated social space. 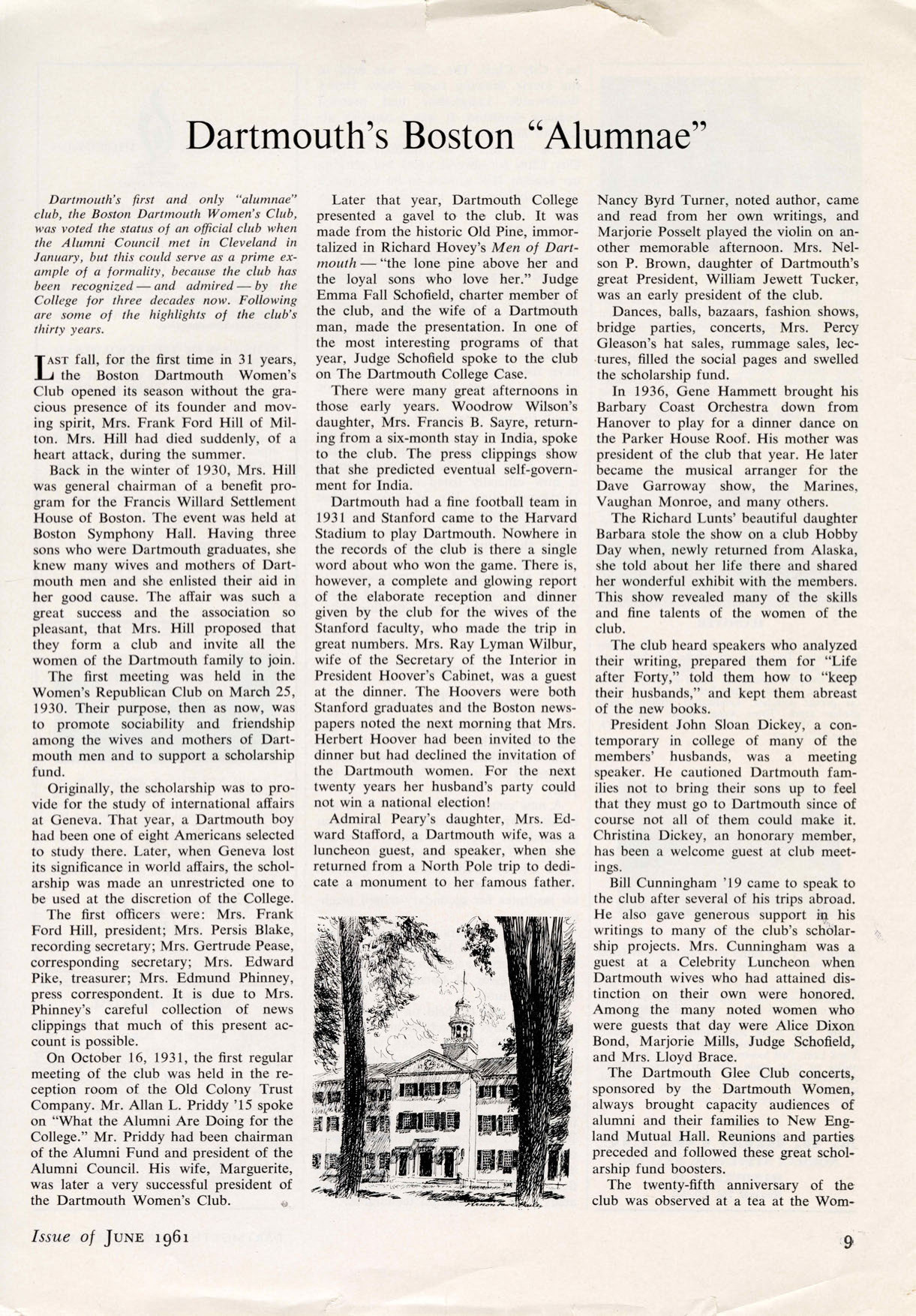 An article in the Dartmouth Alumni Magazine documenting the early history of the Dartmouth Women’s Club of Boston, notably how it was formally designated as the college’s first “alumnae” association.

Dartmouth Women's Club member profile claiming that the club changed its name from the Dartmouth Matron’s Club because it was “too staid” for the lively women, a sentiment that is echoed in Favorite Dartmouth Recipes. 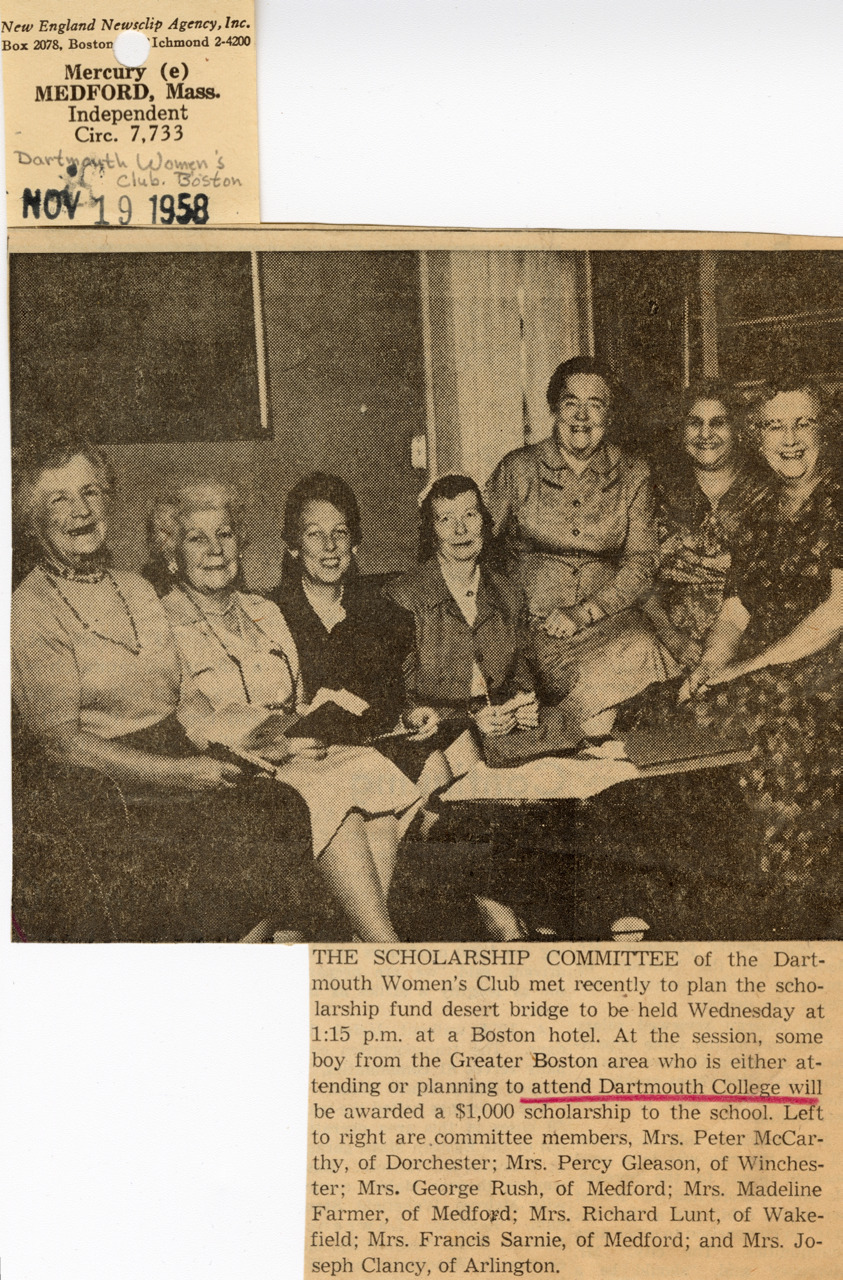 A newspaper clipping showing an image of the Dartmouth Women's Club of Boston's scholarship committee.