President Dickey and the Beginning of the Fraternity Desegregation Movement

On July 1, 1943, President Hopkins and the Dartmouth administration closed all of the fraternities on campus, which had started hosting the V-12 unit of the United States Naval Training School. The administration felt the fraternities would only become a distraction to the officers and trainees. After John S. Dickey became Dartmouth President in 1945, one of the first items on his agenda was deciding whether the college should reopen the fraternities. A major point of debate was the discriminatory clauses in the constitutions of some chapters, as members of the Board of Trustees were concerned the clauses would have a negative impact on public image. The fraternities reopened a year later in 1946, but Dickey said in a radio interview that the Board of Trustees had ultimately “decided not to take any authoritative action, requiring that the clauses be eliminated” despite their original concerns.

However, from a personal standpoint President Dickey was firmly in favor of eliminating the discriminatory clauses from Dartmouth’s fraternities. Prior to becoming college president, he had served as a member of President Truman’s Committee on Civil Rights Commission, which he claimed “sharpened his awareness and concern” for issues of discrimination. He first stated his views in a pamphlet distributed to prospective fraternity members in 1948, in which he writes that “This college neither teaches nor practices religious or racial prejudices, and I do not believe it can for long permit certain national fraternities through their chapter provisions or national policies to impose prejudice on Dartmouth men.” In 1957, he published an addendum to the fraternity pamphlet:

While Dickey and the Dartmouth administration were largely opposed to discriminatory clauses in the fraternities, they would not take formal action on the issue until 1954. The movement to remove the clauses and desegregate the fraternities was ultimately initiated and led by Dartmouth undergraduate students. The movement began in the fall of 1949, when the northeastern regional Interfraternity Council (IFC) recommended to the national IFC that all national fraternities should eliminate discriminatory membership clauses, specifically those excluding men based on their “race, religion, or national origin.” Then editor-in-chief of The Dartmouth, Jack Gilroy, drew attention to these events in an editorial he published condemning the absence of a Dartmouth delegate at the Northeastern Regional IFC meeting where this recommendation took place.

In reality, the Dartmouth IFC had appointed a delegate who had to drop out last minute, but Gilroy’s editorial sparked campus awareness on fraternity discrimination in Dartmouth’s Greek societies. On October 26, 1949, the Dartmouth IFC voted unanimously to publicly endorse the northeastern IFC’s recommendation, which was the first “official action” against discriminatory clauses at Dartmouth. 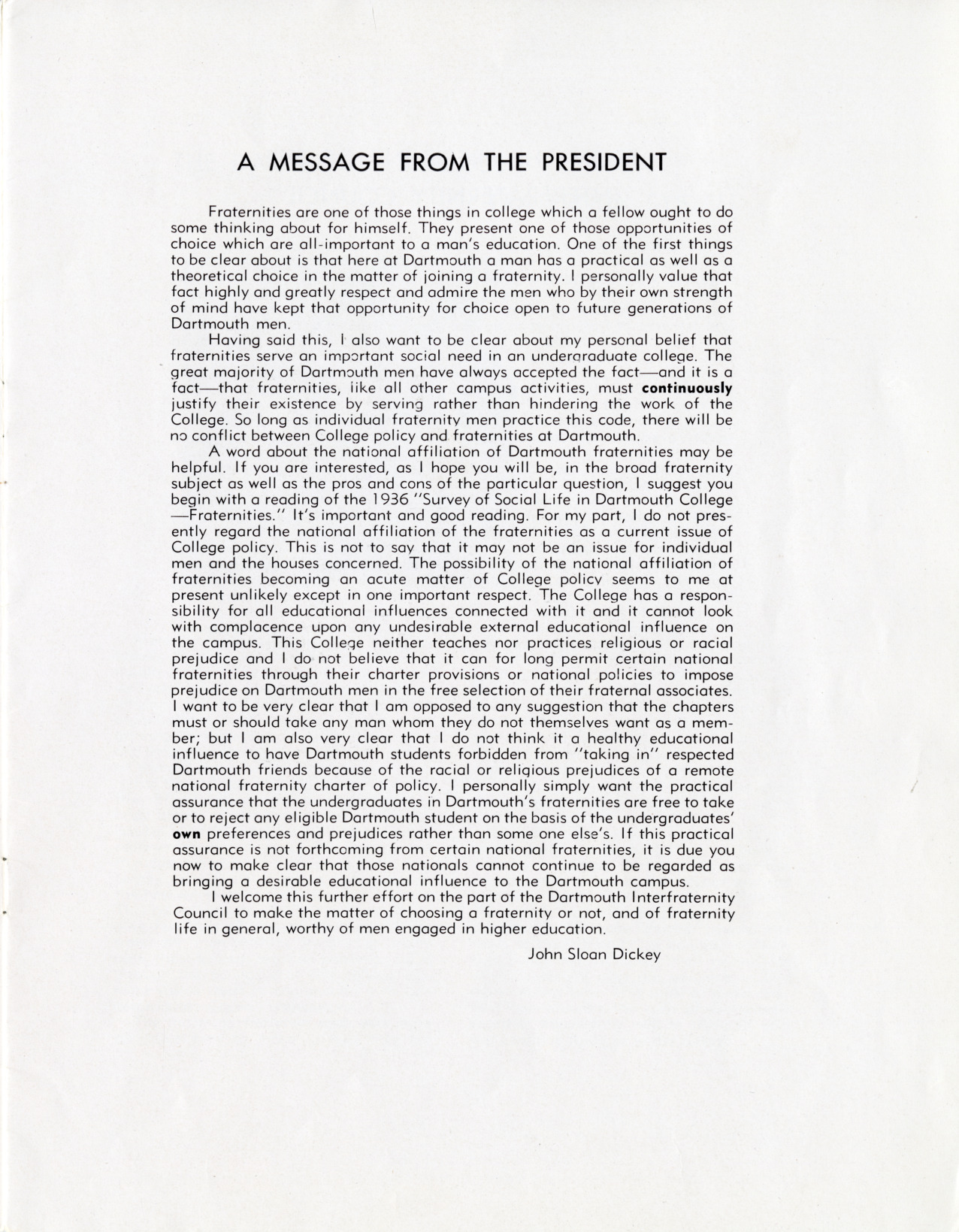 In a pamphlet distributed to prospective fraternity pledges in 1948, President Dickey stated his personal opinion on the fraternity discrimination issue: "This college neither teaches nor practices religious or racial prejudice and I do not believe that it can for long permit certain national fraternities through their charter provisions or national policies to impose prejudice on Dartmouth men in the free selection of their fraternal associates." 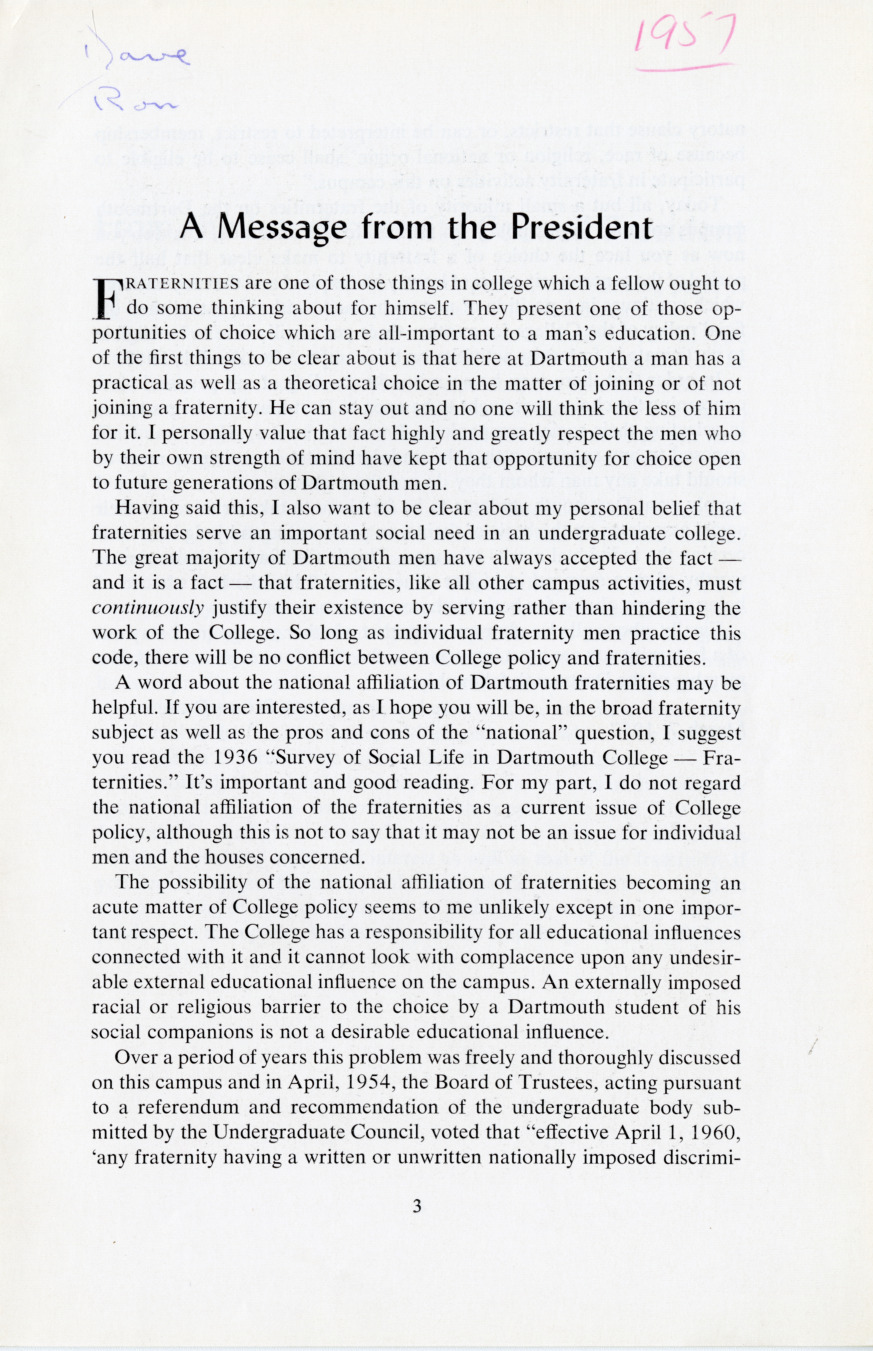 In this 1957 edition of the 1948 fraternity pamphlet, President Dickey restated his opinion on discriminatory membership clauses in Dartmouth's fraternities. 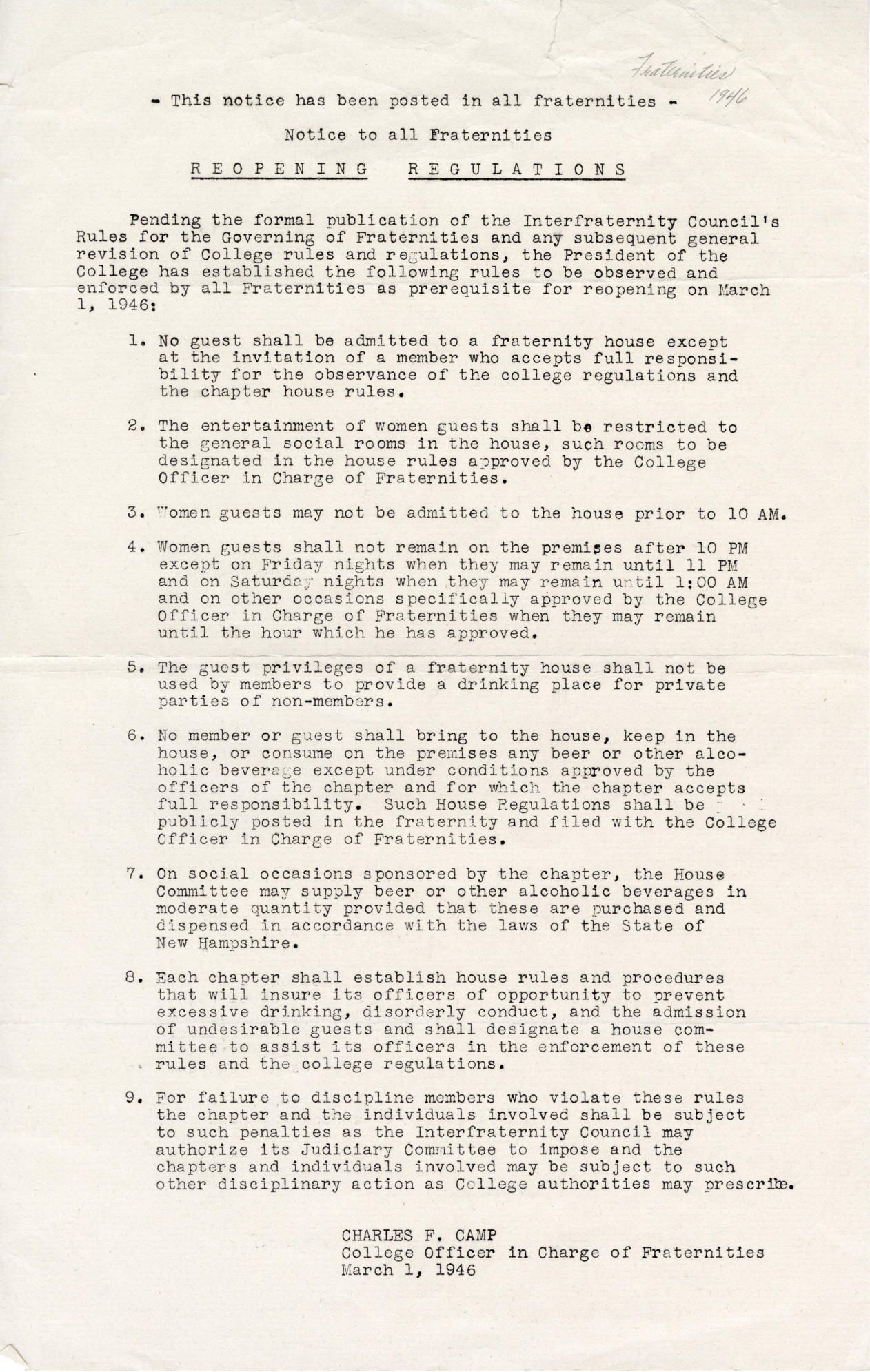 In order to reopen after World War II, fraternities had to follow a set of regulations established by President Dickey in 1946. The regulations, however, ommited guidelines for the removal of discriminatory membership clauses.