Coeducation and the First Female Members of Dartmouth Fraternities 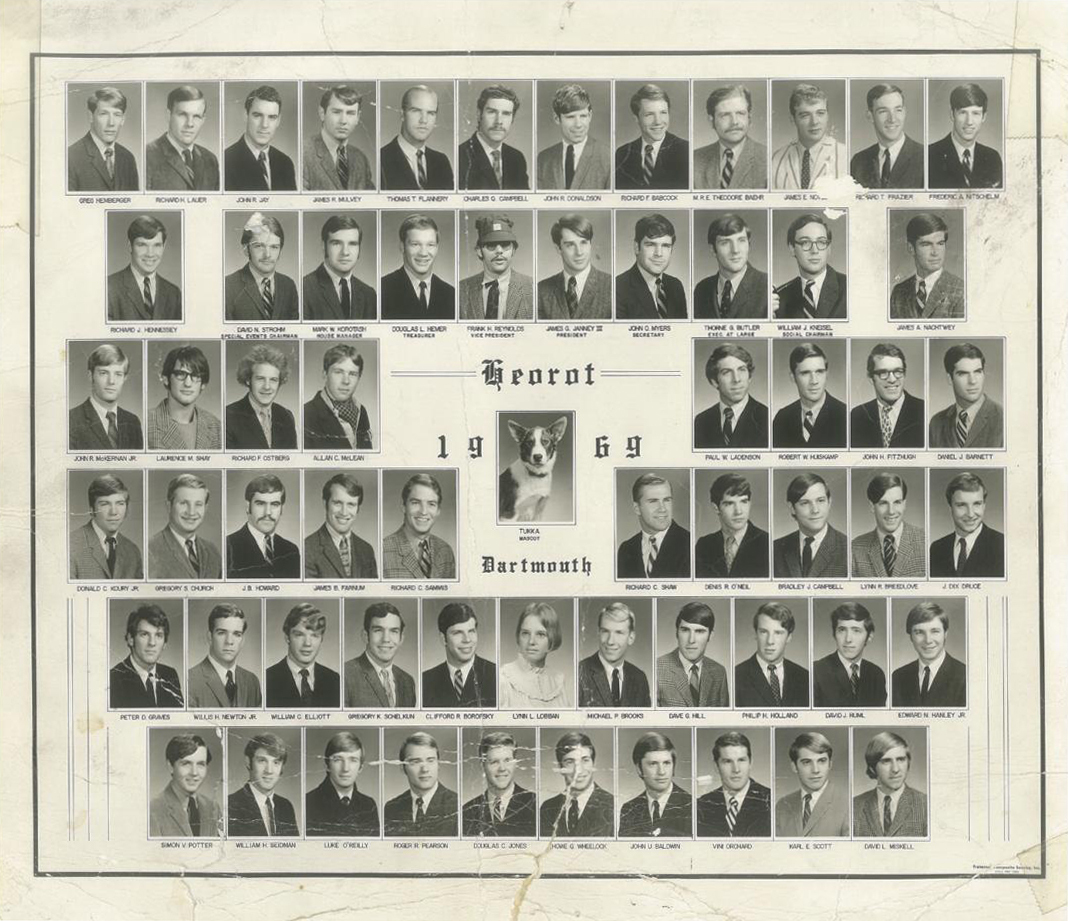 Q&A with Lynn Lobban: One of the First Women at Dartmouth

Lynn Lobban was the first woman initiated into a fraternity at Dartmouth. She is pictured here in Chi Phi Heorot's 1969 composite.

Some Dartmouth fraternity chapters that never had constitutions with discriminatory clauses decided to go local after seeing the success of chapters who went local over issues of discrimination. One of these chapters was Chi Phi, who went local as Chi Phi Heorot in 1968. As a local chapter, Chi Phi Heorot had autonomy to pledge whomever they wanted, and as such the chapter pledged the first woman into a Dartmouth fraternity in 1969—three years before the college became fully coeducational. Lynn Lobban came to Dartmouth with a group of seven female exchange students invited to take classes in the theater department for the 1968-1969 academic year. Lobban knew a Chi Phi Heorot brother through a mutual friend, and she happened visit the Chi Phi Heorot house on the night of their pledging. By the end of the night, she became a pledge after being unanimously approved by the brothers of the chapter. She proceeded to undergo the entire rush process before being fully initiated into the fraternity. Her initiation was heavily frowned upon by the Dartmouth administration, who wanted the chapter to have her serve as an honorary member.

Foley House, which was a local fraternity formed out of Delta Upsilon, pledged two women during the same year: Virginia Feingold and Barbara Wood. Unlike Lobban, who was an exchange student, these two female students came to Dartmouth for Co-Ed Week, which was a week-long event occasionally hosted by the institution. In their defense, Foley house noted IFC guidelines only stated that fraternity members had to be Dartmouth students. Since the two women were technically Dartmouth students during the coeducational week, they were therefore eligible for fraternity membership.

When the college officially became coeducational in 1972, five fraternities opened their membership to women: Foley House, Phi Tau, Tabard, Phi Sigma Psi, and Alpha Theta.  These houses were met with heavy criticism from their peers, who believed the chapters were damaging the integrity of the fraternity system and Dartmouth as a whole. Above all, some thought the chapters were disrespecting the traditions that led to one becoming a coveted Dartmouth man. However, these five chapters gave women the opportunity to engage in Greek life, which they otherwise would not have been able to experience, as the first Dartmouth sorority was not founded until 1977.

Aside from these five fraternities, some of the earliest women at Dartmouth document negative experiences with the all-male chapters. There were incidents in which fraternity members would physically harm female students. In one instance, a fraternity brother hit a woman in the face with a rock; in another, a fraternity brother chased a woman out of his fraternity house with a broken broomstick. There were also incidents in which fraternities would raid the women in their dorm rooms to tell them they didn’t want them there, break their windows, and give them a difficult time just for being students. Fraternities were also known to establish a rating system for all the women on campus, and a common insult was calling the women “cohogs.” 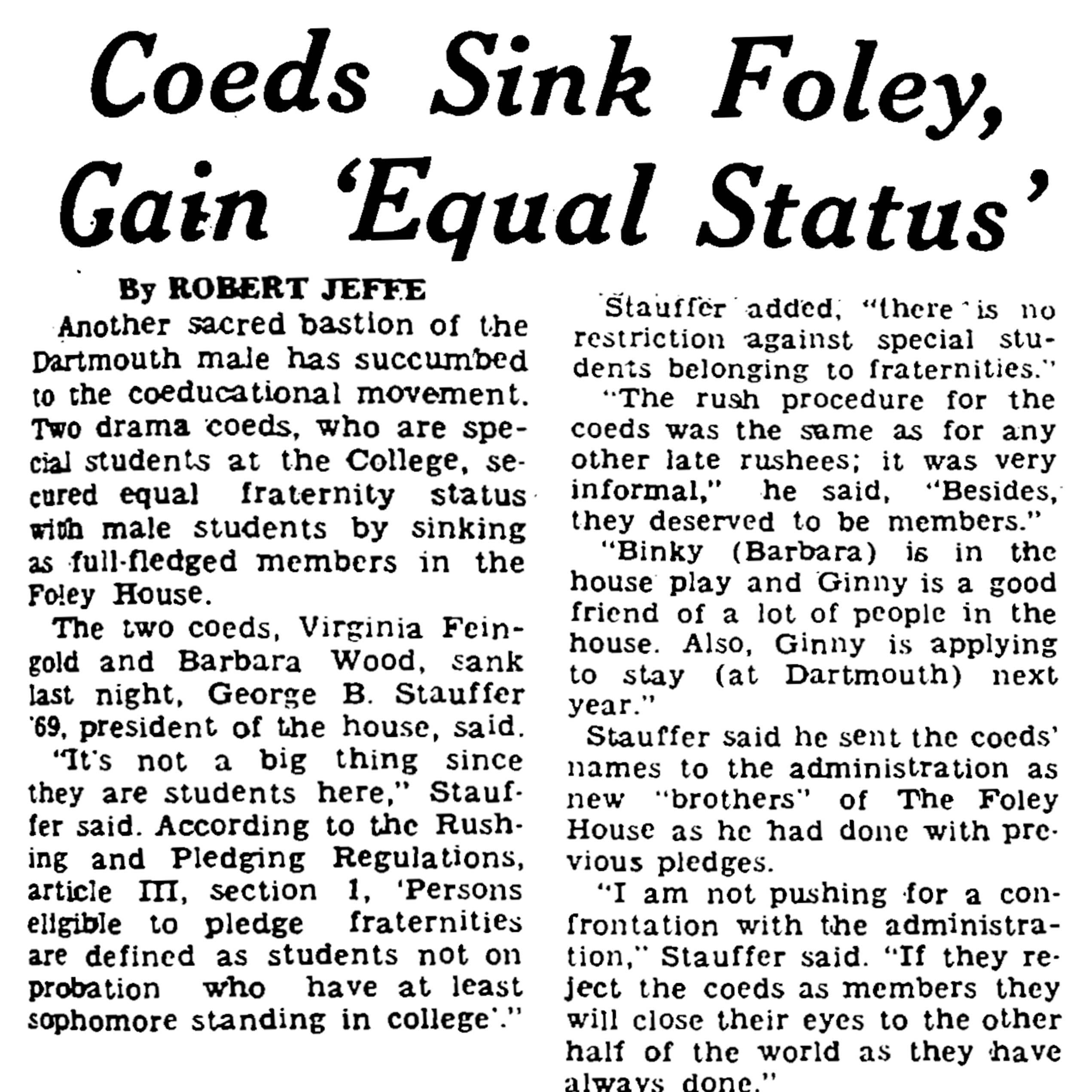 This article details the rush and initiation of two female students into Foley House in 1969. 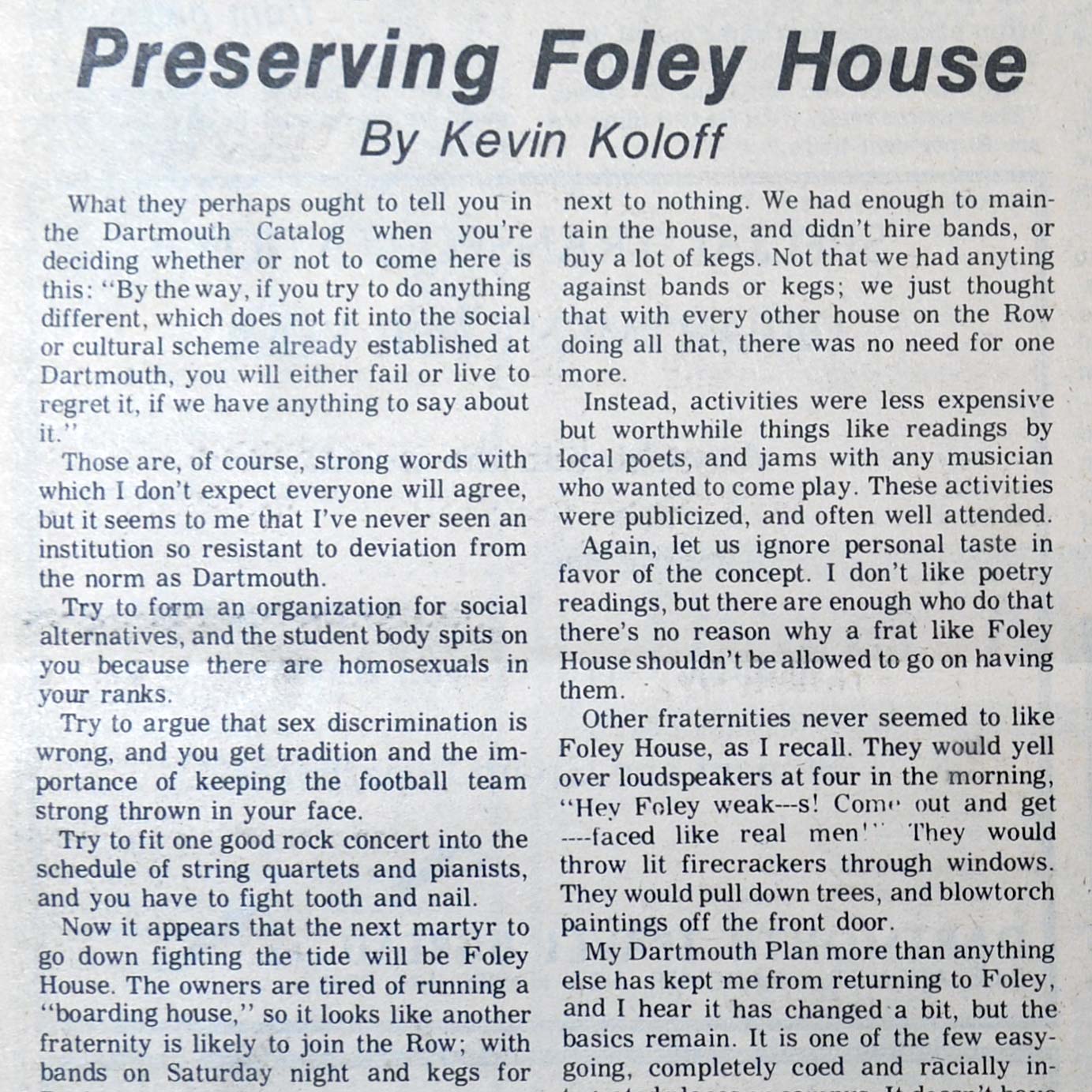 In this article, Koloff documents the backlash Foley House received from other fraternities due to their acceptance of female members. 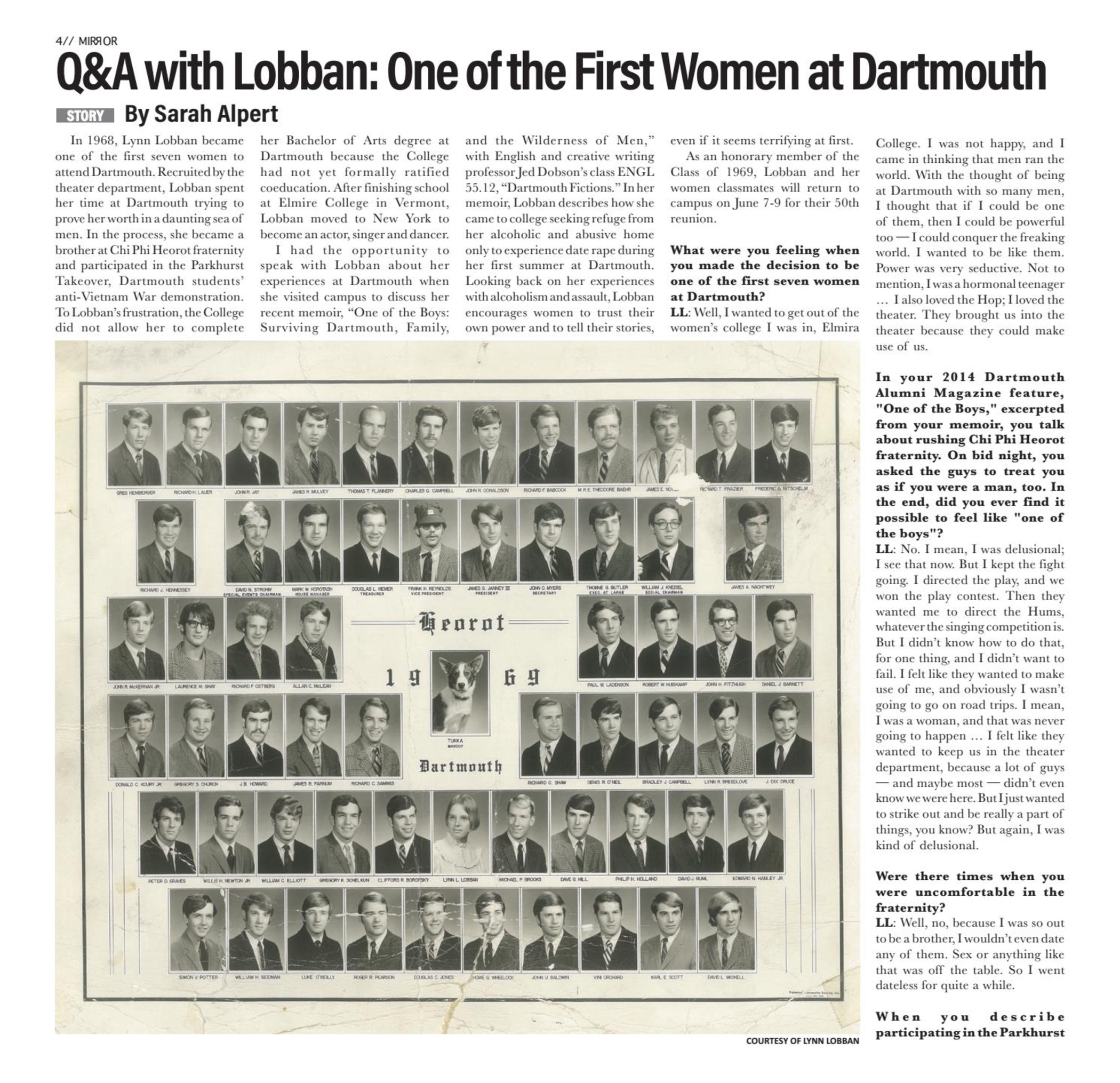 An interview with Lynn Lobban, first woman member of Chi Phi Heorot in The Dartmouth.