The earliest recorded instances of fraternity discrimination at Dartmouth targeted Jewish students. In 1898, Delta Kappa Epsilon (DKE) turned away a Jewish student named Mandel, although it was a chapter with no written discriminatory clause. A member of Delta Kappa Epsilon named Roswell Bogue discussed Mandel’s rush in a letter he sent home to his sister, in which he tells his her that he doesn’t think his fraternity will take Mandel. He writes, “We don’t care at all whether a fellow has money or not, it’s truly the man himself. He is the biggest Jew in college and Dartmouth is not the place for Jews.” Bogue’s letter not only displays an instance of discrimination within his fraternity, but highlights discrimination against Jewish students on the entire Dartmouth campus. A surprising piece of this story is that Dartmouth’s eleventh President, Ernest M. Hopkins, was a student at Dartmouth and likely a member of DKE at the time of this incident. Hopkins graduated in 1901, and assuming he pledged as a freshman (as students were able to do at the time), he would have been a brother when Mandel attempted to rush. Hopkins would later become an important figure in the discrimination issue During his presidency at Dartmouth, as he was a proponent of the quota system placed on the admission of Jewish students.

“I hardly think we will take Mandel into D.K.E. We don’t care at all whether a fellow has money or not [it’s] truly the man himself. He is the biggest Jew in college and Dartmouth is not the place for Jews.”

A similar incident denying a Jewish student membership because of his religion occurred in Psi Upsilon. According to a piece of correspondence from the Dartmouth Alumni Magazine, dated December 14, 1911, only two or three Jewish students were members in Dartmouth fraternities. The author of the letter, Eugene Clark, details an incident in Psi Upsilon in which a Jewish senior student who was “very well liked and [sic] prominent in college affairs” was proposed on multiple occasions to be admitted into the fraternity but rejected each time due to his religion. Recall Psi Upsilon was established without a discriminatory membership clause; however, the prejudiced membership practice detailed in the letter exemplifies the presence of membership discrimination in many Dartmouth fraternity chapters who were established without discriminatory clauses.

A plausible explanation for Dartmouth’s early fraternities omitting discrimination from their constitutions is American universities being almost completely composed of white students when the chapters were established. Therefore, the fraternities were only able to recruit from a pool of students the chapter viewed as socially unacceptable. As Dartmouth’s student population grew increasingly diverse, fraternities like Psi Upsilon began to discriminate against various groups of students in spite of their constitutions.

In a letter to Dartmouth administrators, an unnamed alumnus of Psi Upsilon acknowledges and holds himself accountable for the discrimination in his fraternity and in the greater fraternity system in the early 1900s. He writes, “President Hopkins has stated that there is racial tolerance at Dartmouth, but surely he is aware that the fraternities, my own, Psi Upsilon, among them, are incorrigibly anti-Semitic.” The alumnus included this excerpt in a letter condemning Hopkins’ defense of the Jewish admissions quota.

“President Hopkins has stated that there is racial tolerance at Dartmouth, but surely he is aware that the fraternities, my own, Psi Upsilon, among them, are incorrigibly anti-Semitic.” 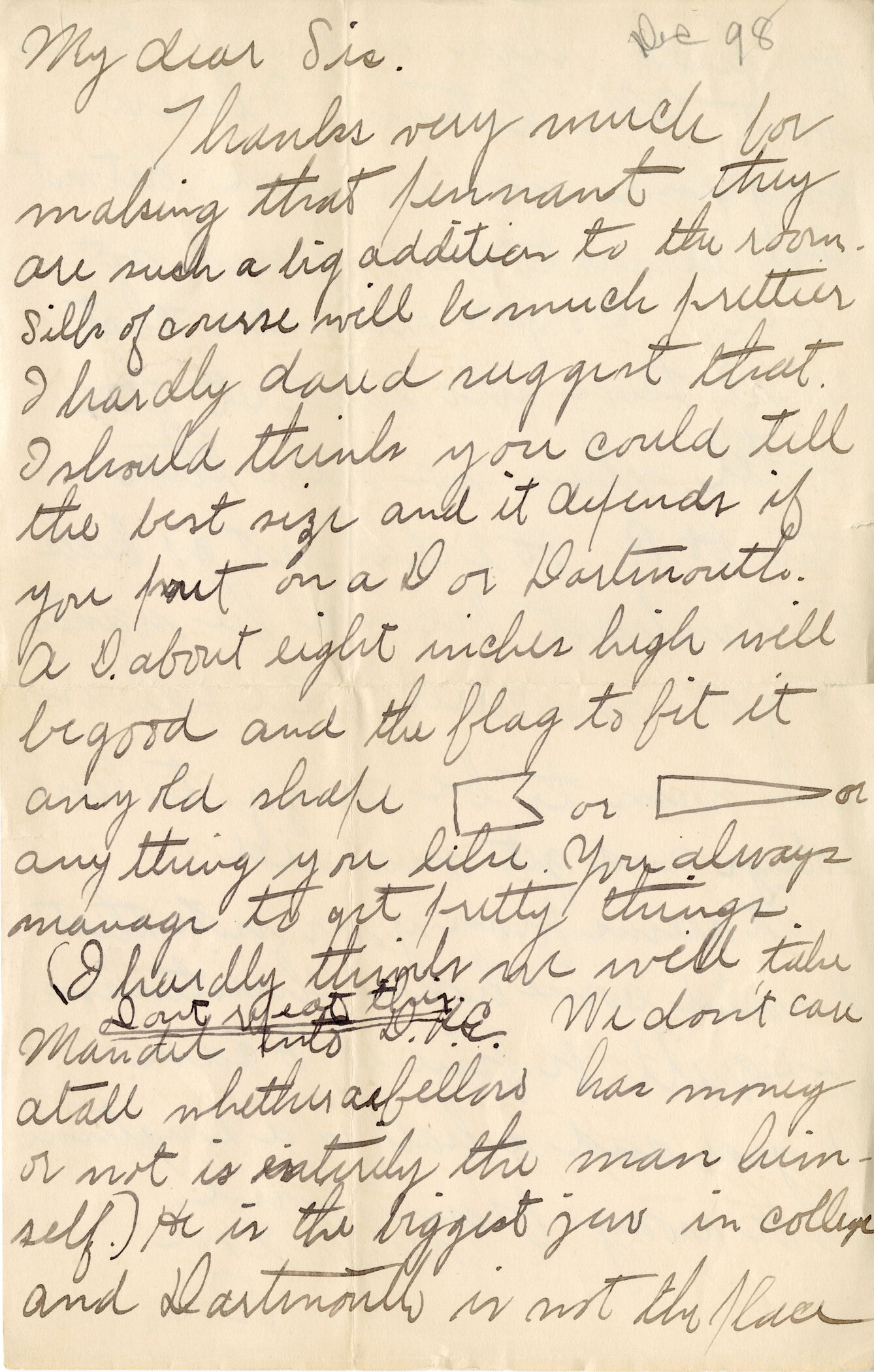 In this letter, Roswell Bogue notifies his sister of his fraternity, Delta Kappa Epsilon, refusing to accept a Jewish pledge named Mandel due to his religious affiliation. 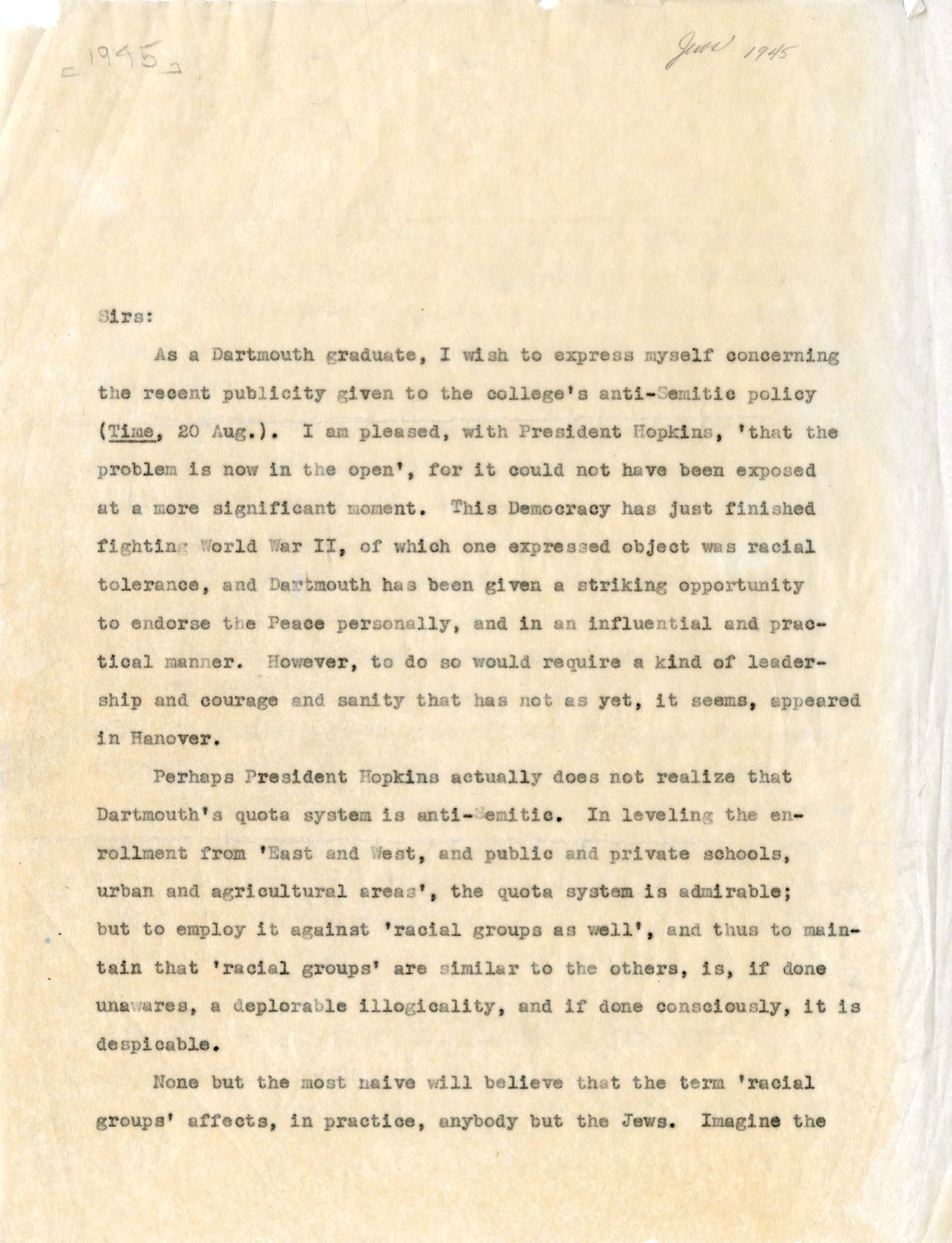 In a memo addressed to the Sirs of Dartmouth, an unnamed alumnus admits his fraternity, Psi Upsilon, and the entire Dartmouth fraternity system are "incorrigibly anti-Semitic."