From 1978 through 2000, students, faculty, and administrators intermittently called for the abolishment of Dartmouth’s fraternity system and of the single-sex Greek societies on campus. During these three decades, Dartmouth fraternities were constantly in the media following reports of hazing, drug abuse, alcohol abuse, as well as continued incidents of racism, anti-Semitism, misogyny, sexism, homophobia, elitism, and other prejudices that discriminated against certain groups of students at Dartmouth. Many believed the fraternities lacked governance, evidenced by some chapters withdrawing affiliation from the IFC to become independent. With fewer chapters, the IFC lost its control over the Dartmouth fraternity system, and their judicial process for handling fraternity misconduct was considered lackluster.

On November 6, 1978, Dartmouth faculty voted 67-16 to enact a proposal for the abolishment of the fraternity system. The proposal was drafted by English professor James Epperson, and stated, “many fraternities perpetuate sexual and racial stereotypes that humiliate and degrade women, Blacks, and American Indians.” In response to the faculty vote, the Board of Trustees appointed an ad-hoc faculty committee on fraternities to evaluate the fraternity system and each chapter throughout the upcoming year. Prior to their evaluation, the committee was, in part, concerned the fraternities “adversely affected the recruitment and retention of high caliber faculty, especially in the case of women and minority faculty, and [sic] also had a negative impact on the recruitment of outstanding women and minority students.” At the completion of their report, the faculty committee “reached the unanimous conclusion that... the changes that have taken place and are likely to take place in the fraternity system are not sufficiently responsive to the faculty’s concerns.” They published their report in January 1980, and included recommendations for Dartmouth and each chapter to rectify the conflict. The committee proposed a three-year period for the college to adopt their recommendations, along with a clause stating the fraternity system would be abolished if the recommendations were not implemented by the conclusion of the three years.

The faculty committee’s recommendations were ultimately rejected by the Board of Trustees later in 1980, but in a statement the Board claimed they would “continue to ‘monitor’ the fraternities.” Subsequently, the Trustees implemented “Minimum Standards” for fraternities and sororities in 1983, ensuring the Greek societies complied with behavioral, safety, anti-hazing, and anti-discrimination policies. Each society was reviewed annually to assess their performance and ensure they met the requirements set by the standards, and if they were found to be unsatisfactory they would be removed from campus.

Faculty members added to the debate by publishing editorials in The Dartmouth and endorsing student groups campaigning against the retainment of the fraternity system. During Convocation in 1992, the president of the Student Assembly, Andrew Beebe ’93 (who was a member of a fraternity himself), proposed the idea that the administration should implement a mandatory coeducational social system, but his proposal was denied by students and administrators.

In February 1994, an open petition backed by a student group with faculty support again called for the Dartmouth fraternity system to be abolished. The petition cited “sexual assault and intimidation of minorities” as solid grounds to put an end to the fraternity system. The student group, the Dartmouth Alliance for Social Change, received signatures from 84 students and alumni, and seven from faculty members. They believed the college would be better served by having undergraduate societies with coed membership.

The fraternities ultimately outlasted these calls for abolishment, but two coed undergraduate societies were founded in the mid 1990s in Panarchy and Amarna. The final call for the abolishment of single-sex Greek societies came in 1999, when the college under President Wright, announced the Residential and Student Life Initiative, which was a five-point plan focused on creating a fully coeducational social system. The initiative was put to rest, however, after a student poll revealed 83 percent of voters were in favor of maintaining Dartmouth’s Greek system.

Unquestionably, there was tremendous progress made to eliminate discriminatory fraternity culture throughout the 20th century, but there is still work to be done as evidenced by community views near the year 2000. The issues highlighted in the debate for the closure of Dartmouth’s Greek societies were and are real, and the fight to eradicate prejudice and discrimination from Greek life rages on. Research on fraternity discrimination is far from being completed, and as Greek life moves forward, sources from the past will be uncovered to supplement the history.

Article in The Dartmouth detailing faculty editorials, as well as the student assembly president proposing a policy for mandatory coed societies.

Article in the Valley News describing an open petition by the Dartmouth Alliance for Social Change to abolish the fraternity system on campus. 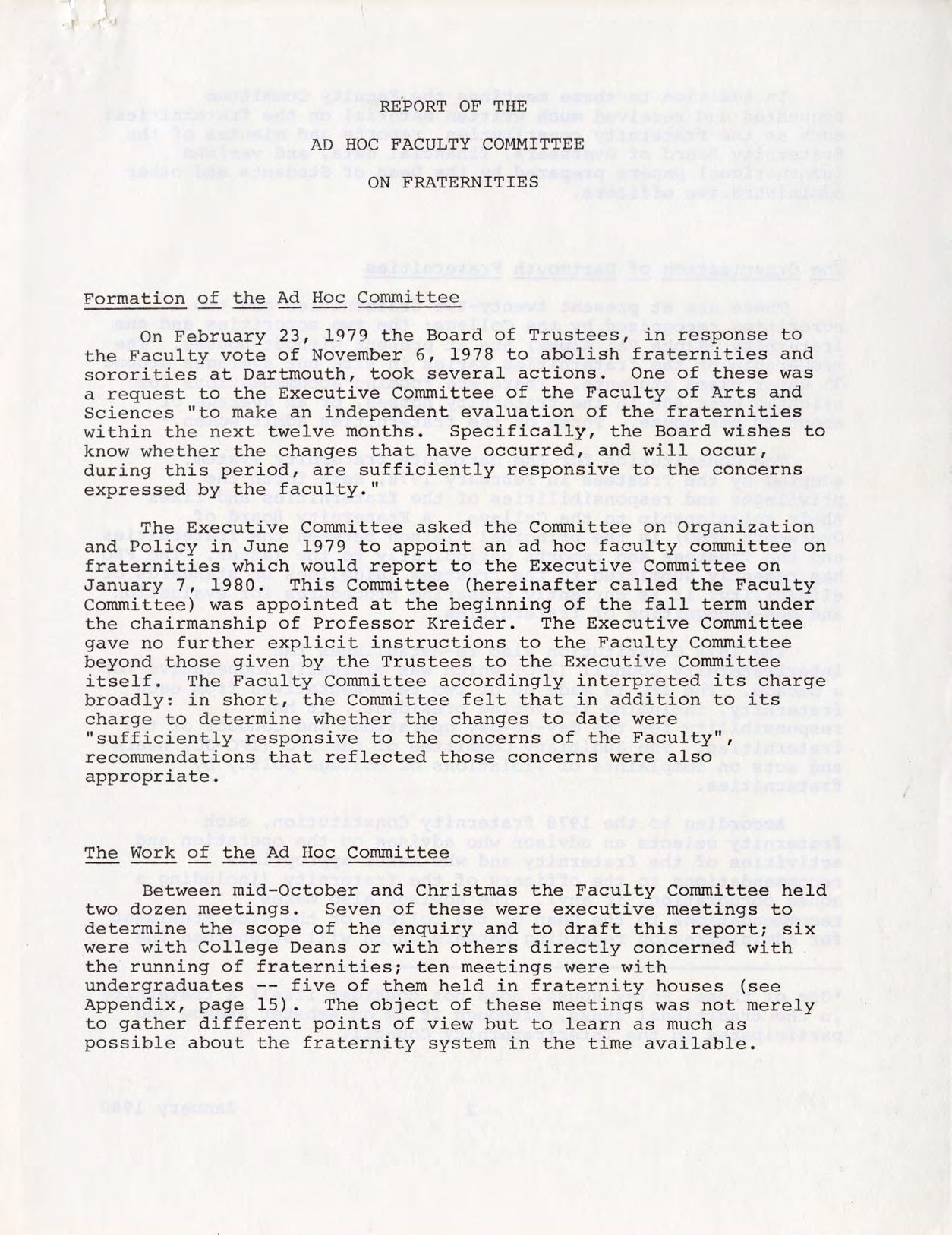 The Report of the Ad-Hoc Faculty Committee on Fraternities details the Committee's formation, their concerns, and their final evaluation of the fraternity system in 1980.