In 1963, at his inaugural address as Governor of Alabama, George Wallace declared “segregation now, segregation tomorrow, segregation forever.” Ten months later, on November 5, 1963, Wallace visited Dartmouth for the first time. His first appearance was well-received by the majority of the Dartmouth community, as an audience of several thousand gathered in Leverone Field House to hear him speak. However, there were students and faculty who were rightfully appalled by his presence on campus, and who protested his appearance. Organized by the group “Students for Freedom,” students who denounced his presence on campus picketed the Field House in an orderly fashion, and faculty members wore visible black armbands in protest of Wallace’s segregationist policies.

Wallace’s second appearance in May 1967 garnered a much larger protest and much more media attention, showcasing the increase in student activism and student dissent that had developed since his last visit. Multiple groups called for different actions, all with the same intent of letting Wallace know he and his racist politics were not welcome on campus. The Upper Valley Human Rights Committee urged for a boycott of the speech, the Dartmouth Christian Union passed out handbills urging silence and about ten students in the Afro-American Society planned to heckle Wallace and stage a walkout. In Webster Hall, where Wallace’s speech was being held, Black students chanted “Wallace is a racist,” which sparked a counter-protest among white audience members, who yelled at the protestors to “shut up” and “get out.”

The group then staged a walkout, storming out of the auditorium. Outside of Webster Hall, students discussed whether to go back inside and resume the protest. Joined by more supporters, including white students and spectators, the protestors pushed back into the auditorium and rushed up the center aisle. Alabama State Troopers rushed Wallace off the stage and to his car, but he encountered trouble there as well. A large group of protestors surrounded Wallace; some even pounded on the car roof and rocked the car back and forth. In an essay reflecting on his involvement in the protest, an active member of the Afro-American Society wrote:

“Our agreed-upon objective was to create enough disruption and chaos during the speech to compel the national news media (which we knew would be at the speech) to report on our protest nationwide, so that Black people nationwide would know that we, too, were committed to the then fierce struggle being waged across America against the racism and fascism that George Wallace advocated.”

With the help of the police, Wallace’s car was able to leave after 15 minutes. He continued onto Concord, NH., and spent the night there instead of in Hanover as originally planned. The protest was received negatively by alumni and the press, but was certainly well-covered, breaking into national news the day after. 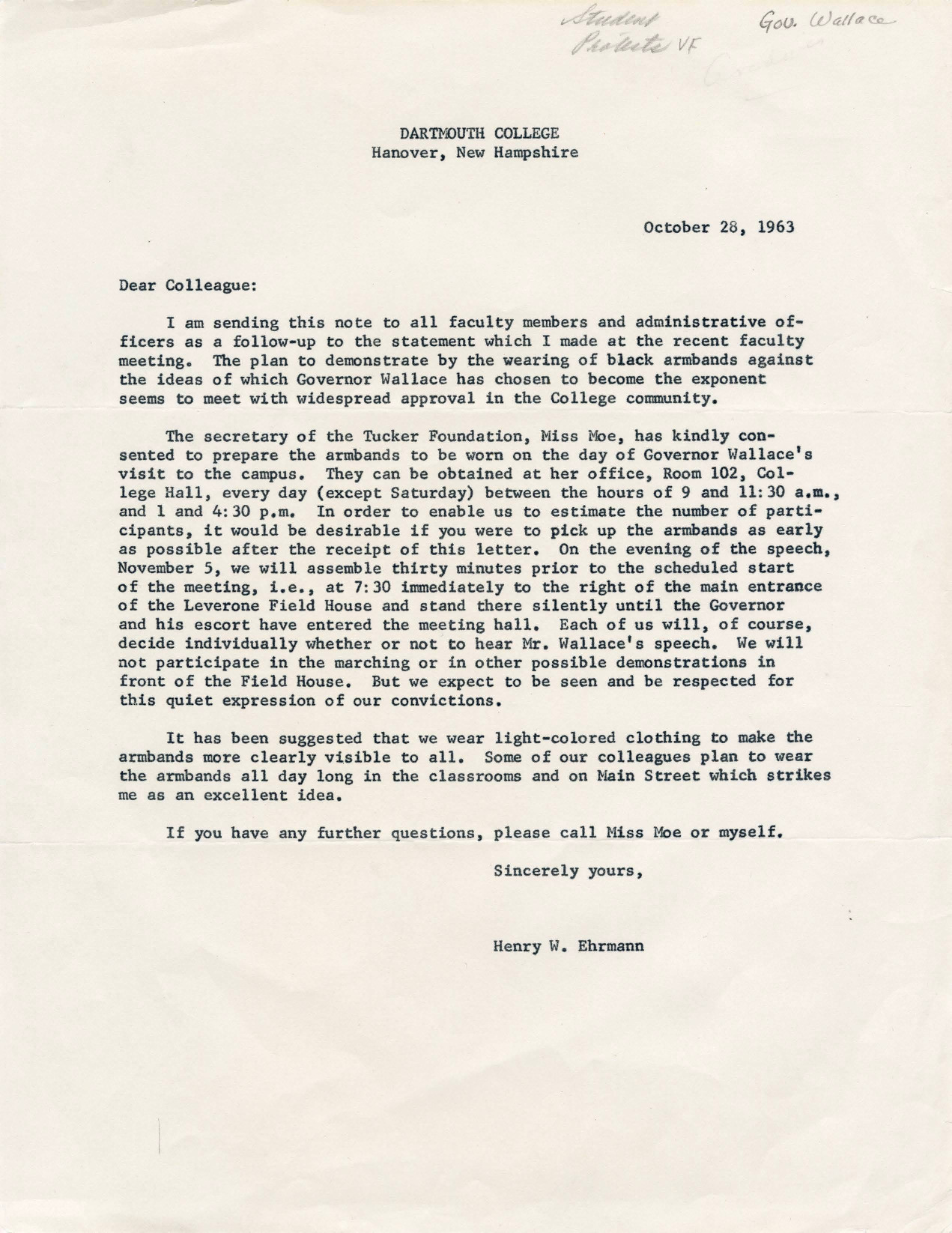 Prof. Henry W. Ehrmann writes to his colleagues of a plan to wear black armbands in silent protest of George Wallace’s visit to Dartmouth in 1963. Ehrmann indicates some faculty plan to wear armbands all day long in classrooms and on Main Street. 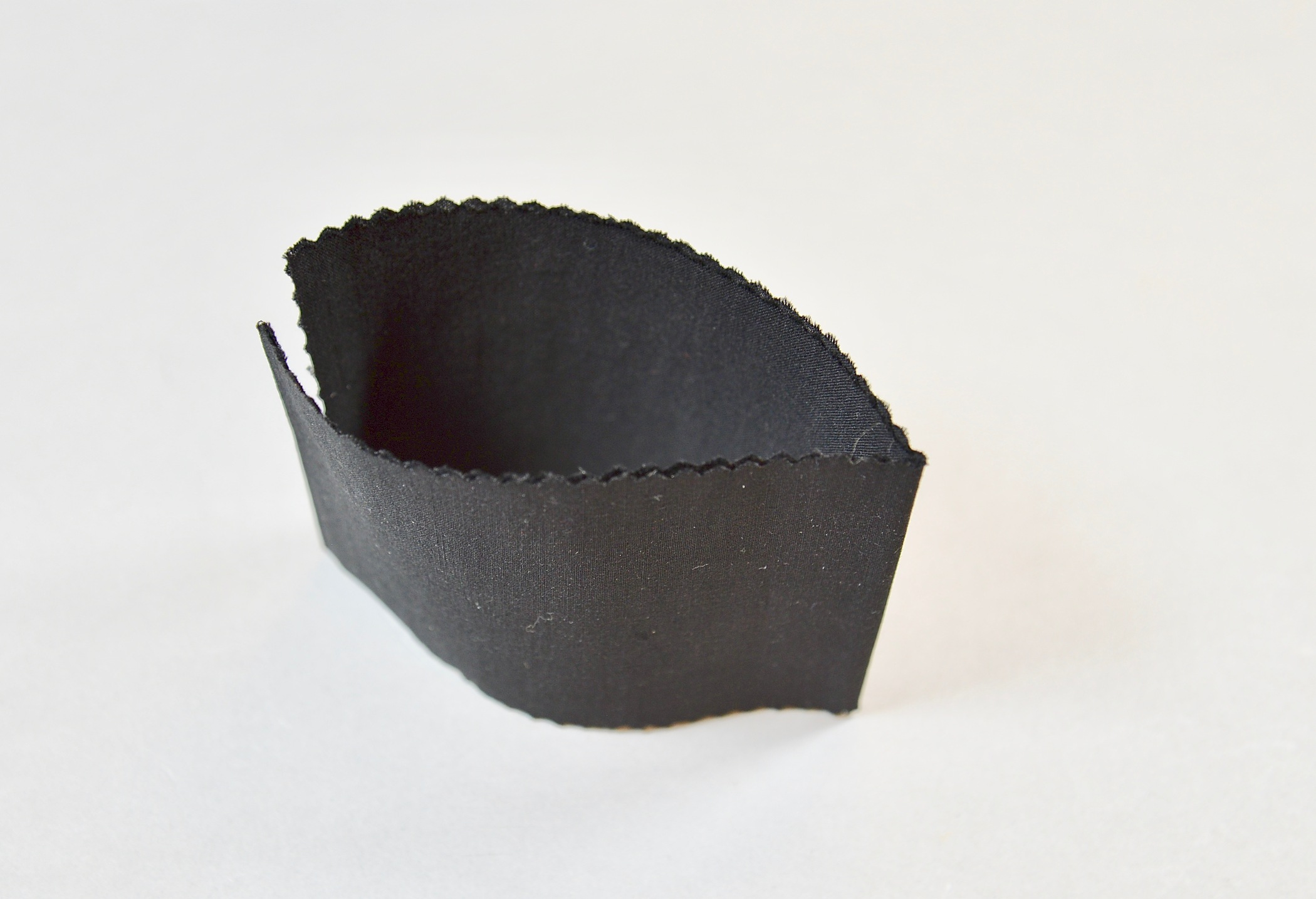 This black armband was worn by members of the Dartmouth College faculty in silent protest of segregationist George Wallace’s visit to Dartmouth in November 1963. 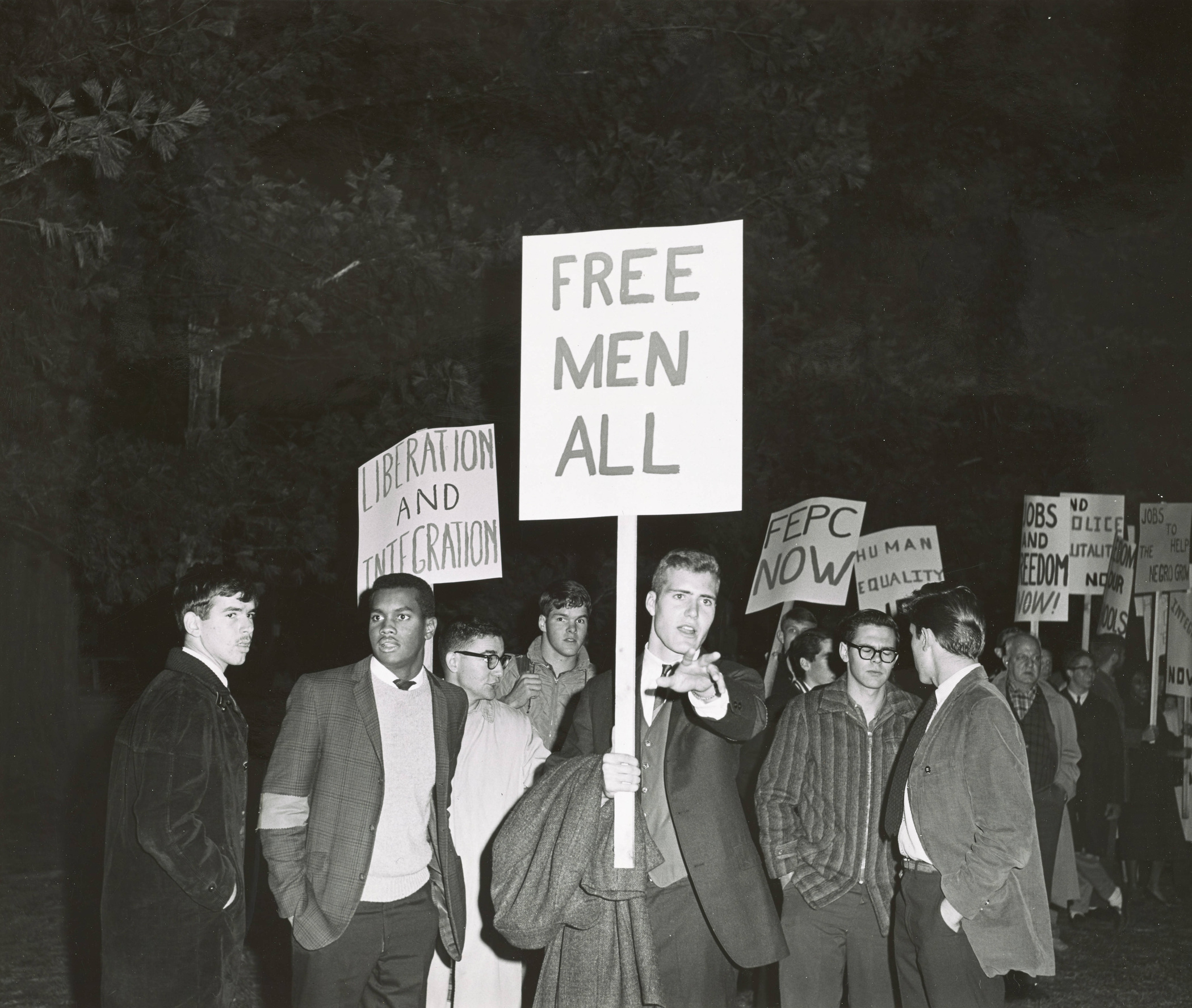 This photograph outside of Leverone Field House, depicts Dartmouth and Upper Valley community members protesting George Wallace's policies and views on race. Signs reading “liberation and integration” and “free men all” are raised in response to the politician’s 1963 inaugural address. 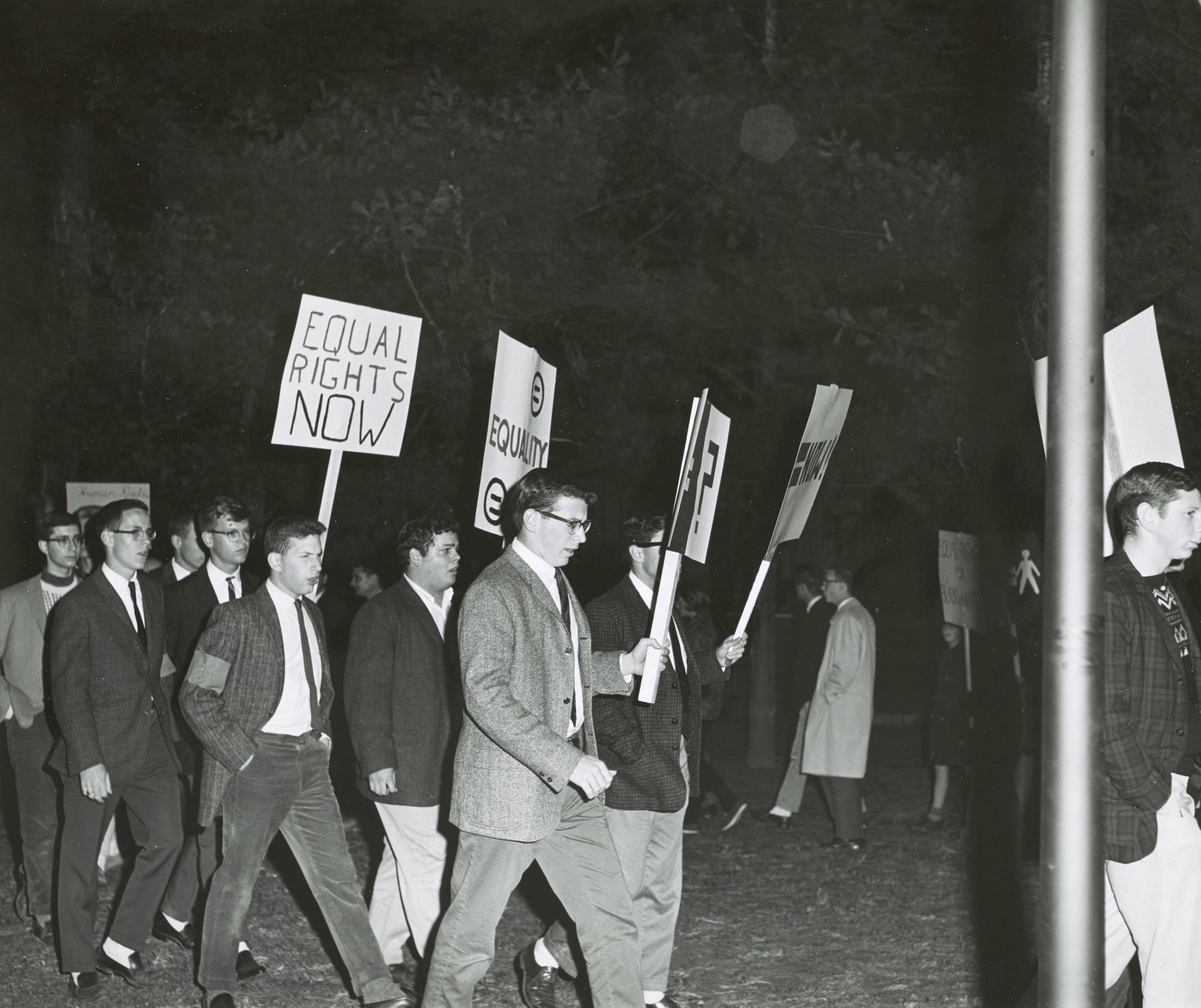 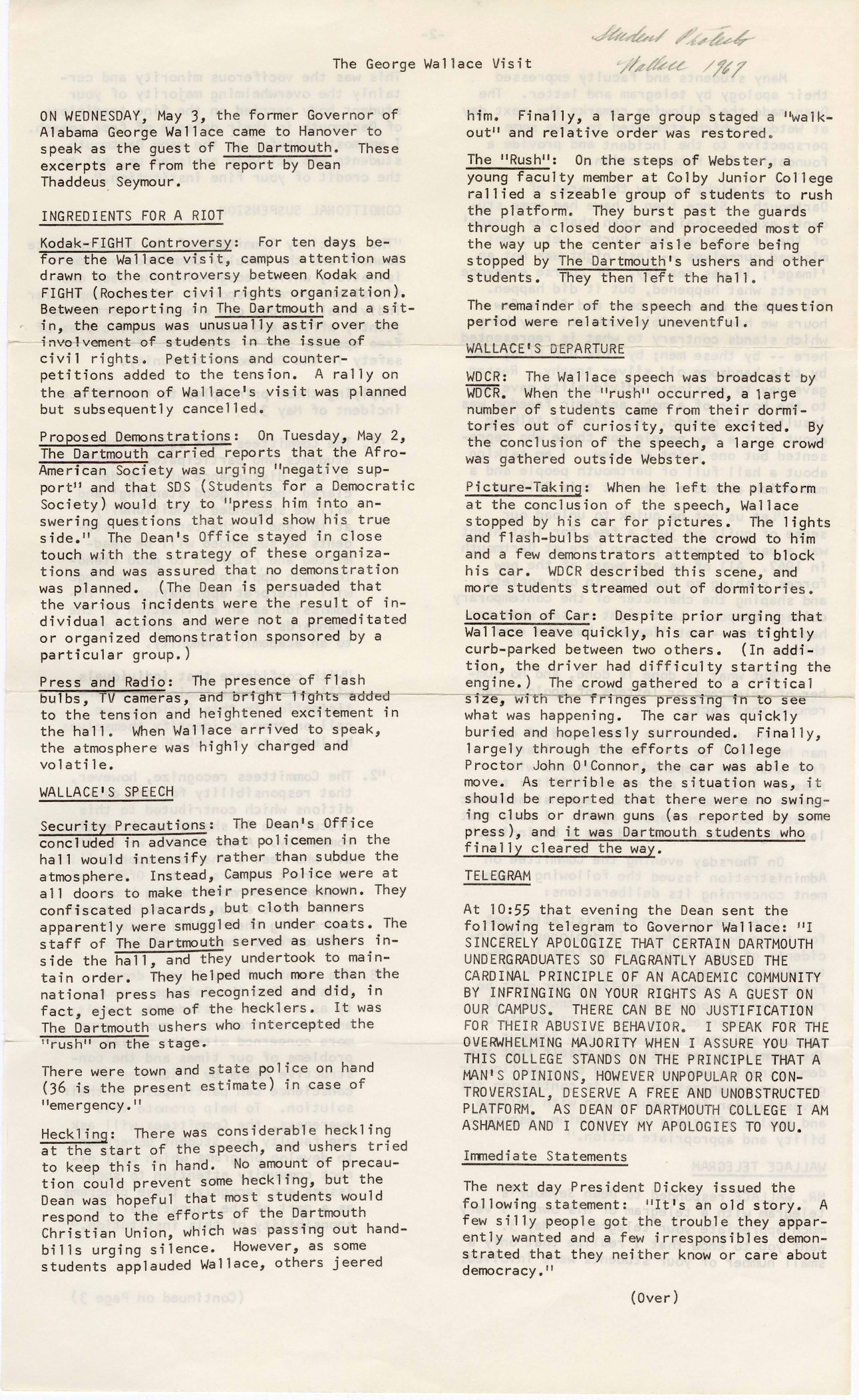 Excerpts from a report by Dean Thaddeus Seymour about George Wallace’s May 1967 visit to Dartmouth as a guest speaker of The Dartmouth student newspaper. 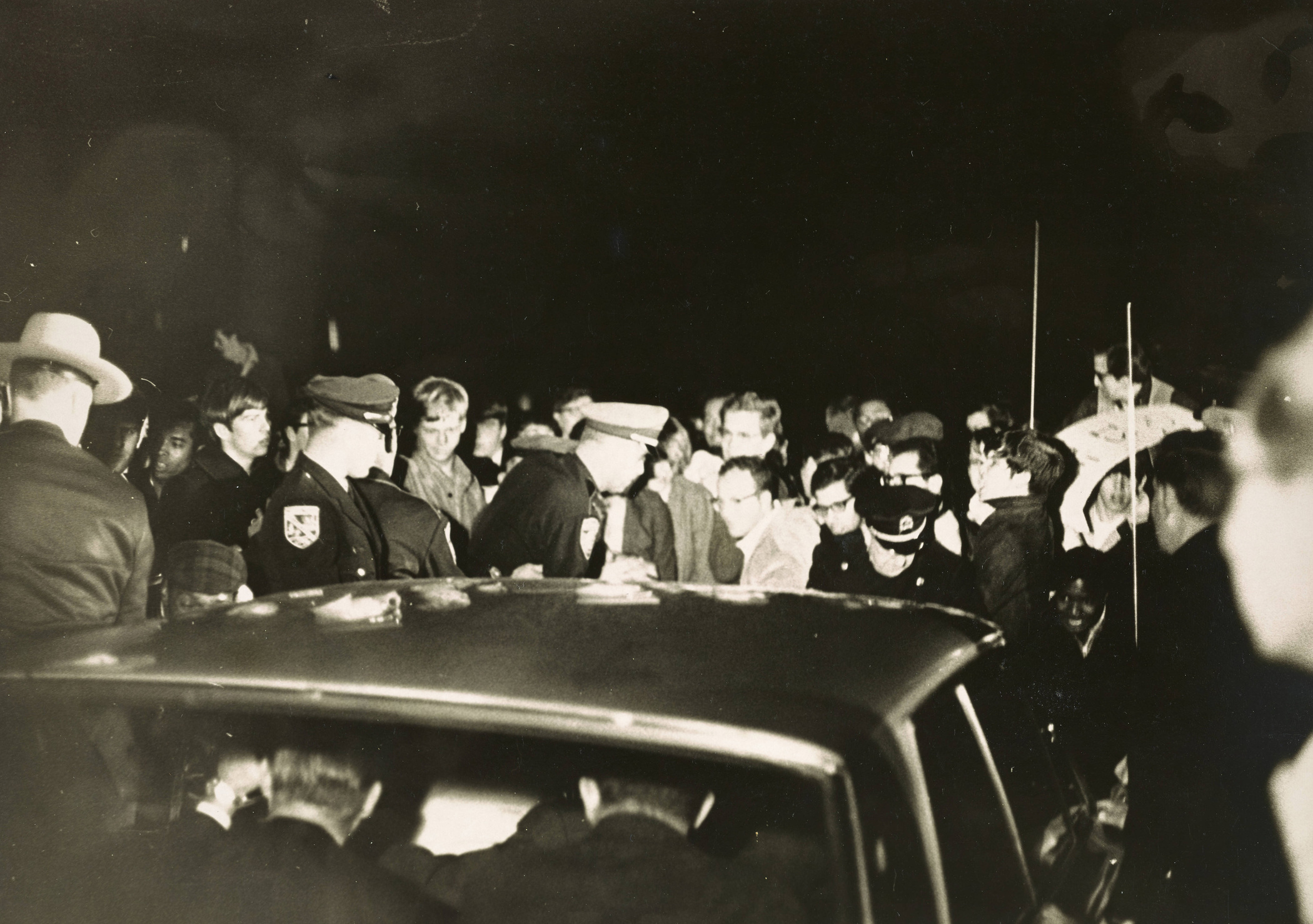 This photograph depicts students and police officers surrounding former Alabama Governor George Wallace’s car after he ended his speech early during his 1967 visit. The protest was later called “The Wallace Riot” as Wallace supporters and news outlets around the nation reported on the demonstration. 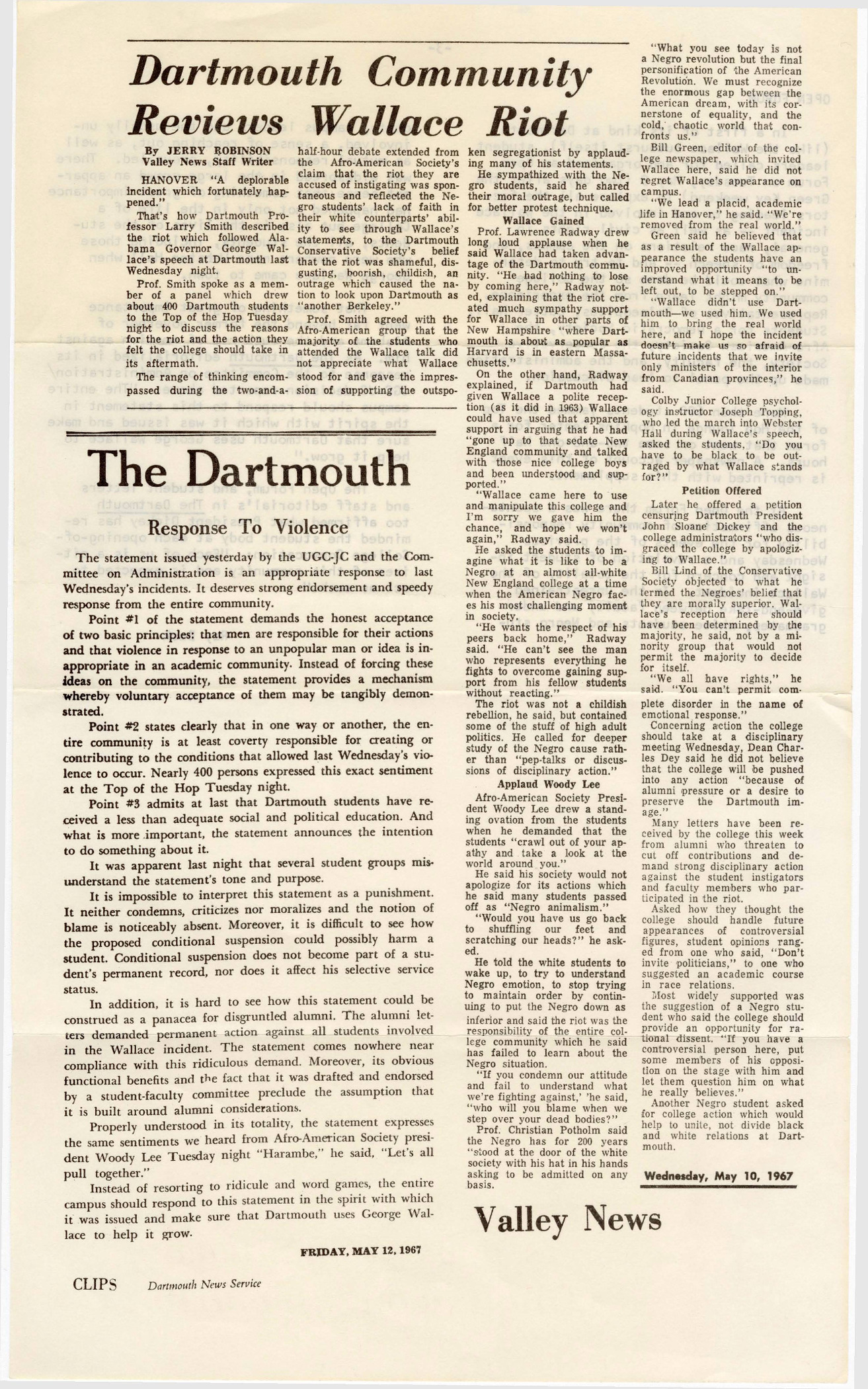 This Valley News article covers the proceedings of a panel discussion held in the Hopkins Center to discuss the student demonstration against George Wallace’s May 1967 visit. The story demonstrates the wide range of opinion held the Dartmouth community following the protests, as well as efforts made to build a more empathetic campus their aftermath. 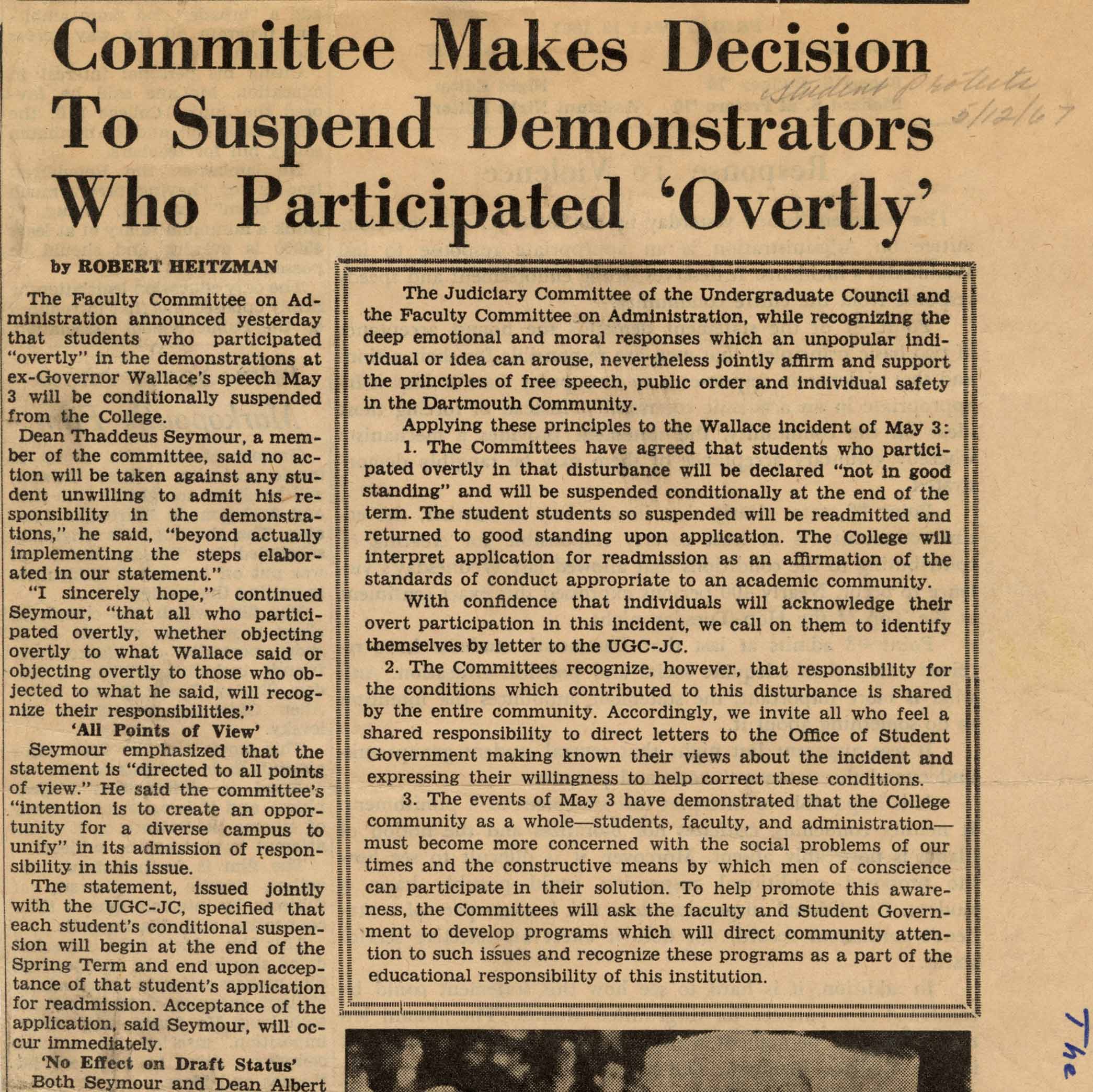 This article details the Faculty Committee on Administration’s decision to conditionally suspend Dartmouth students who participated ‘overtly’ in the demonstration against George Wallace’s speech in Webster Hall. Dean Thaddeus Seymour hoped such actions would “create an opportunity for a diverse campus to unify.” 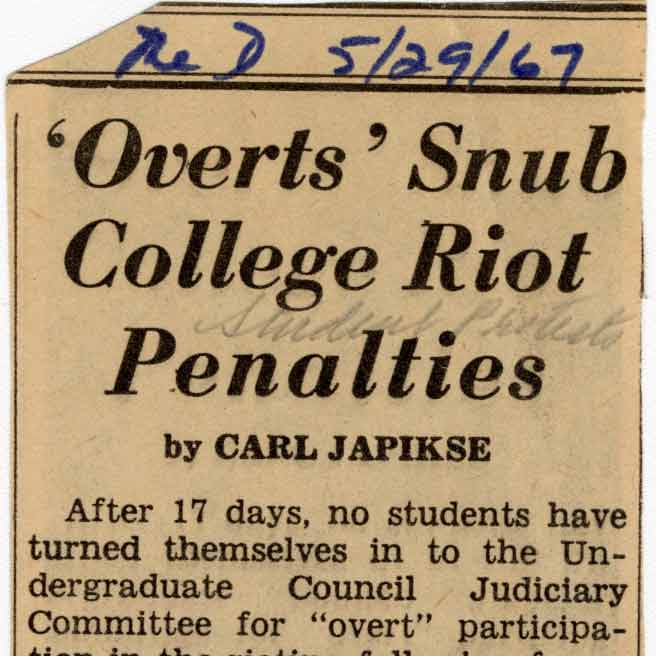 This article reports that no student participants in the demonstration against George Wallace had come forward to admit their involvement after 17 days of having the opportunity to do so. James E. Topinka ’68, chairman of the Judiciary Committee, remarks that he doubted if any students would turn themselves in under risk of temporary suspension.