Establishment of Jewish Fraternities on Campus

However, Pi Lambda Phi was not readily accepted into the Dartmouth fraternity system. Due to resistance from the Interfraternity Council (IFC), the chapter had an abnormally difficult time receiving official college recognition. Pi Lambda Phi applied for recognition three times, once 1924 and twice in 1925, but they were denied on all three occasions. On their fourth attempt in March 1927, the chapter finally received recognition. In the meeting minutes discussing the denial of Pi Lambda Phi’s recognition, there is no detail given as to why voters decided to deny their request, but it can reasonably be inferred the chapter was denied due to their acceptance of all religions. This is evident because another fraternity, Sigma Alpha (which did not openly accept all students) applied for recognition in 1925 and was unanimously approved by the council. Another fraternity welcoming Jewish students was established in 1930, when the Sigma Alpha Mu national fraternity granted a charter to eight Jewish students at Dartmouth. Sigma Alpha Mu was formed as an exclusively Jewish fraternity at the time, and the fraternity was recognized by the IFC after submitting their first application. Unfortunately, Sigma Alpha Mu disbanded in 1935 due to financial difficulties arising from the Great Depression.

“I’m beginning more and more to feel like fraternities are necessary here because the place is otherwise so devoid of social life.”

Richard N. Campen, Class of 1934, was a Jewish student recruited by both Pi Lambda Phi and Sigma Alpha Mu who documented his rush process in personal letters to his family. While he initially refused to pledge a fraternity because of expensive dues, Campen was persuaded to pledge Pi Lambda Phi by a few fraternity members. Campen notably discusses the value of fraternities on the Dartmouth campus, and claims that this more general reason ultimately made him decide to rush; he tells his parents: “I’m beginning more and more to feel like fraternities are necessary here because the place is otherwise so devoid of social life... I could gain a lot from a fraternity.” The only social alternatives on campus at the time were classes and athletics, but these two arenas paled in comparison to the fraternities in regards to fostering connections and friendship. Campen goes further into the topic of the value of Dartmouth’s fraternities in another letter by expressing his joy in having a place where he could say he belonged on campus. This comment, however, is especially disconcerting because prior to the founding of Pi Lambda Phi and Sigma Alpha Mu, Jewish students had no fraternity where they could say they truly belonged at Dartmouth. Campen adds that the two chapters shared a deep bond while they were on campus together, mentioning the members of both chapters would socialize and host parties with each other. 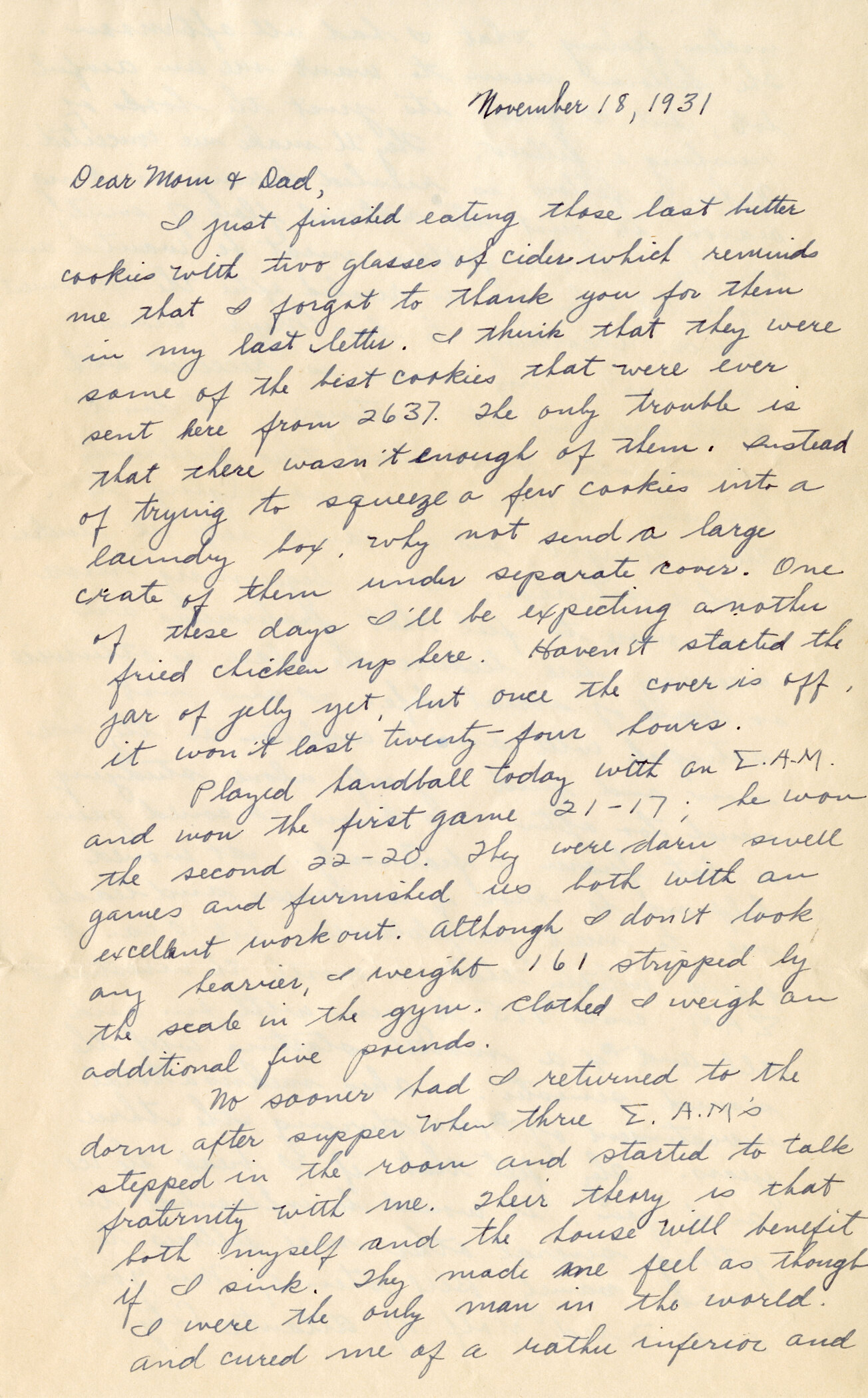 In this letter to his parents, Richard Campen describes the need for fraternities on campus and why he is eager to join one. 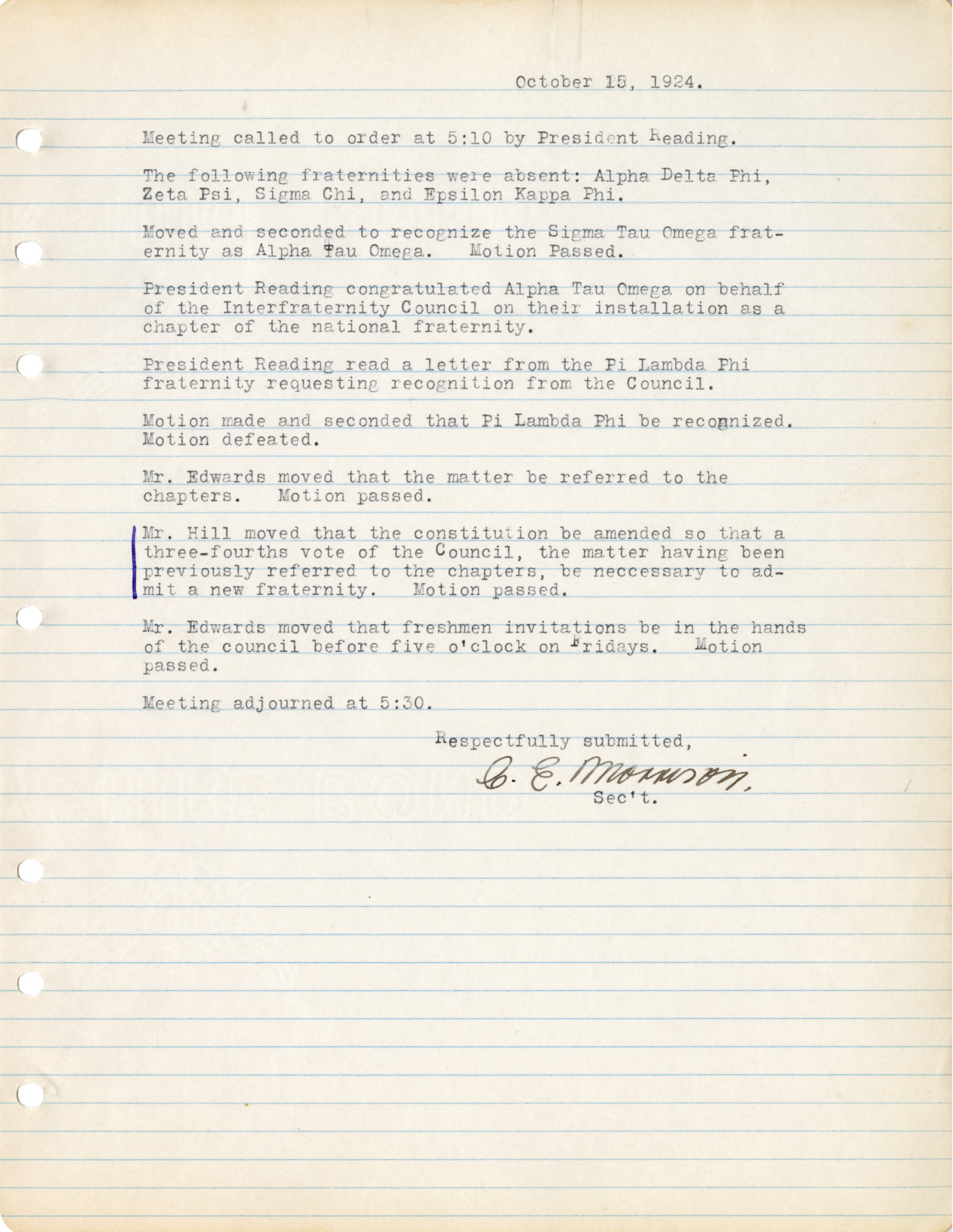 In the Interfraternity Council (IFC) meeting minutes from October 15, 1924 and October 22, 1924, Pi Lambda Phi's first request for recognition is denied.

To receive IFC recognition, fraternities required three fourths of the Council to vote in favor of their request. Pi Lambda Phi received fewer than 50 percent favorable votes in their third request for recognition, being denied at a vote of 11-10 as recorded the Dec. 10, 1925 meeting minutes. 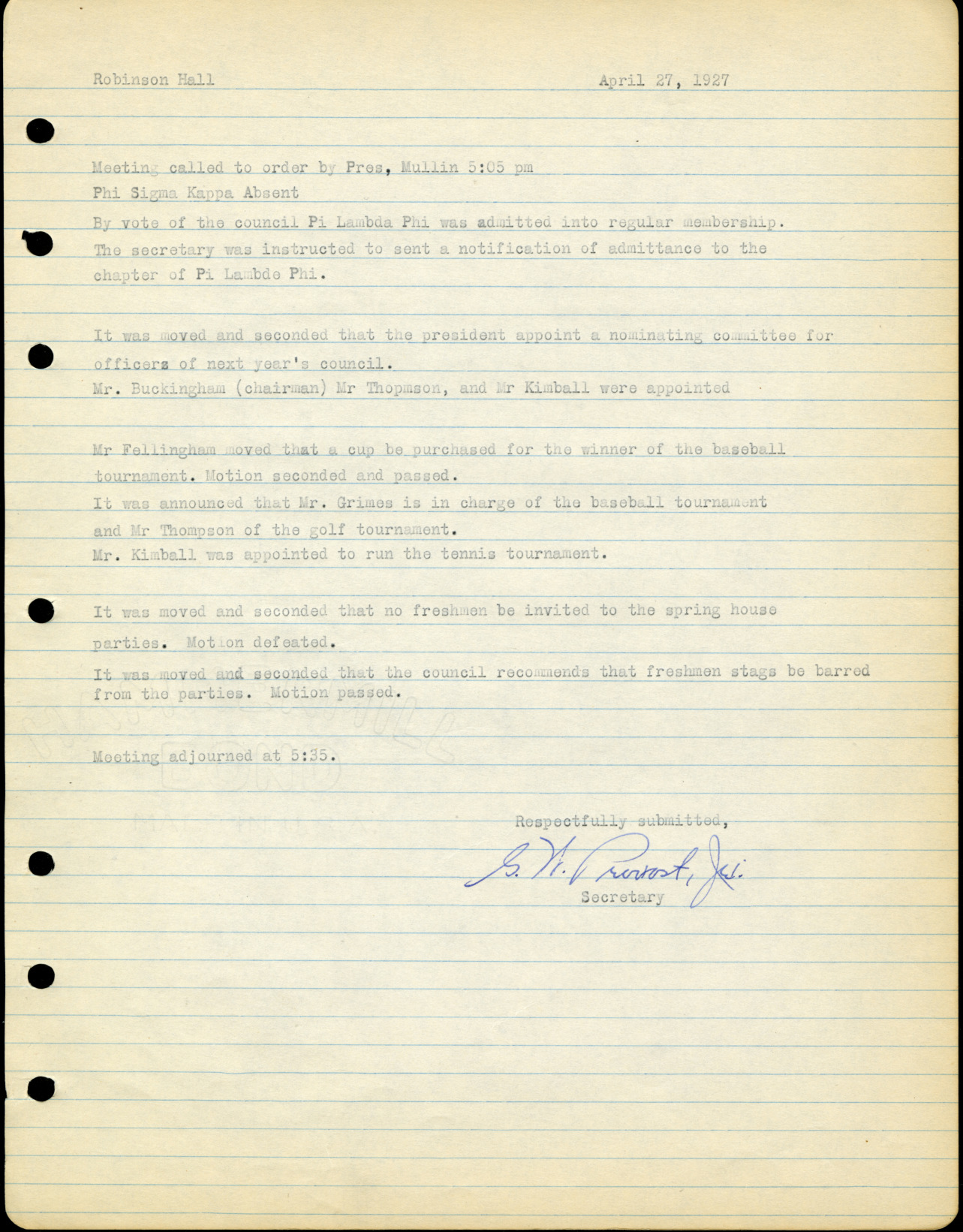 On their fourth request in 1927, following three years at Dartmouh without recognition, Pi Lambda Phi is recognized by the IFC.

The second Jewish fraternity established on campus, Sigma Alpha Mu, is unanimously approved for recognition by the IFC at their first request in 1930.