On January 26, 1965, Malcolm X gave a speech entitled “The Black Revolution in America” to a full crowd in Spaulding Auditorium, at the invitation of the Undergraduate Council (UGC). Martin Luther King, Jr. and his associate James Farmer had both previously spoken at the College, and the UGC brought Malcolm X to expose the student body to a different perspective. Richard Joseph ’65, chairman of the UGC National Issues Committee, helped arrange Malcolm’s visit, later calling it his “single most important achievement as a student at Dartmouth.”

"The place was packed - the Hopkins Center. I was up on the stage. I introduced him. And also, you know, worked with him to field questions and so on. But this was when… This is why it’s an important document if they can find it because it’s when Malcolm was really beginning to start presenting his ideas, like I said, his post-Hajj trip, his post-Middle East trip. So you were really hearing both the old and the emerging Malcolm during that talk.”

During his speech, Malcolm X proclaimed that 1965 would bring “the longest, hottest, bloodiest summer yet witnessed unless something is done about the injustice my people continue to face.” Aside from his speech, Malcolm gave exclusive interviews to The Dartmouth student newspaper and the college radio station WDCR.

Although Joseph considered bringing Malcolm to campus his most important accomplishment, he later spoke of his regret of not sufficiently documenting the visit, saying “in those days we were not mindful that we were living through this historical period in terms of keeping documents.” There were even fewer opportunities to document his ideas after this visit, as Malcolm X was assassinated only three weeks later. 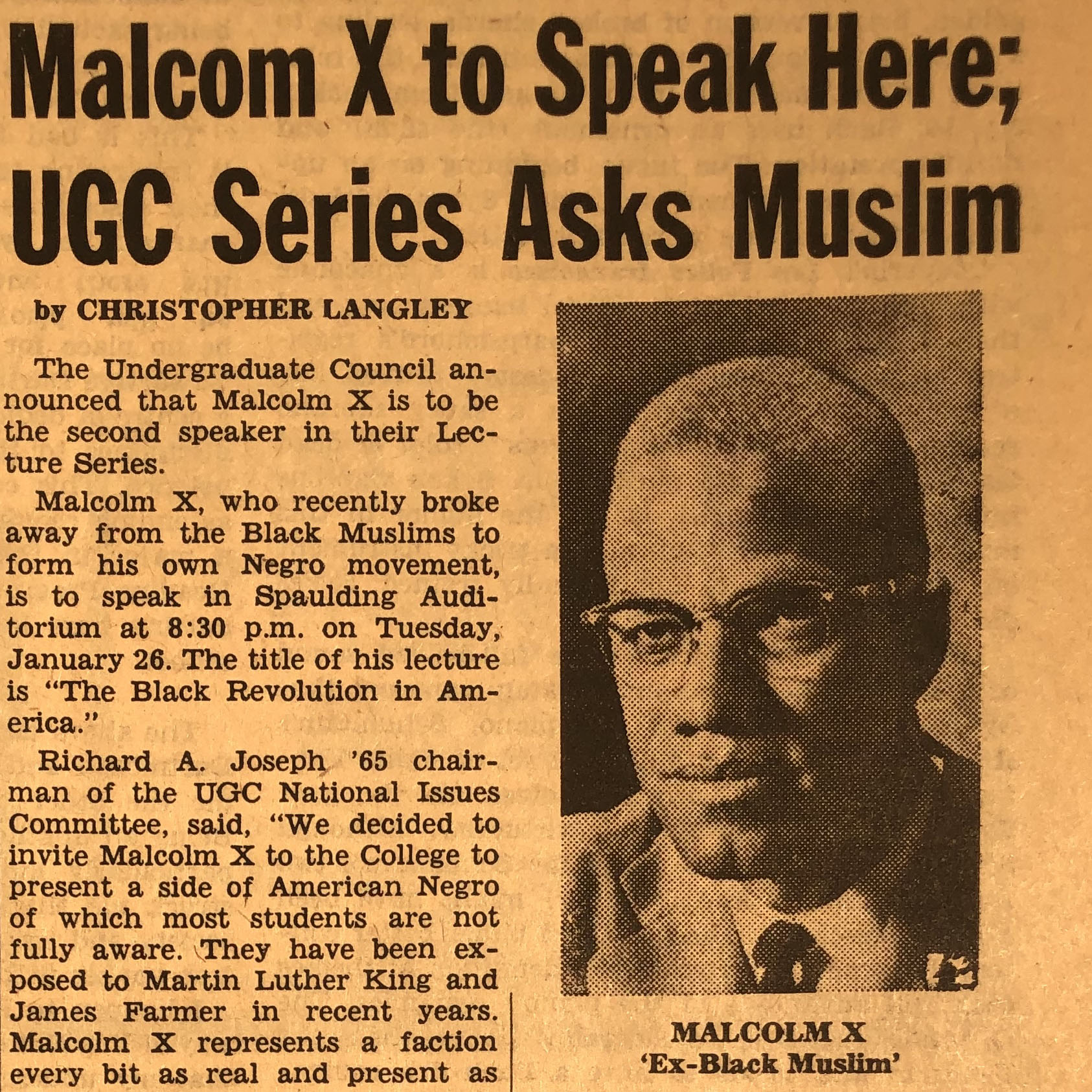 The Dartmouth announces that Malcolm X has been invited to be the second speaker in their 1965 lecture series at Dartmouth. Richard Joseph describes the decision to invite Malcolm as a way to “present a side of [the] American Negro of which most students are not fully aware” in contrast to previous speakers Dr. Martin Luther King Jr. and James Farmer.

Published a day after Malcolm X’s Dartmouth address, “The Black Revolution in America,” this article summarizes the main points Malcolm made regarding race relations. Malcolm emphasized the international nature of the “race problem,” the importance of concentrating on areas of accord between U.S. freedom movements, the influence of African nationalism in strengthening the Black revolution in America, and the role of biased press and “a racist government in Washington” in the failure to resolve Civil Rights issues. 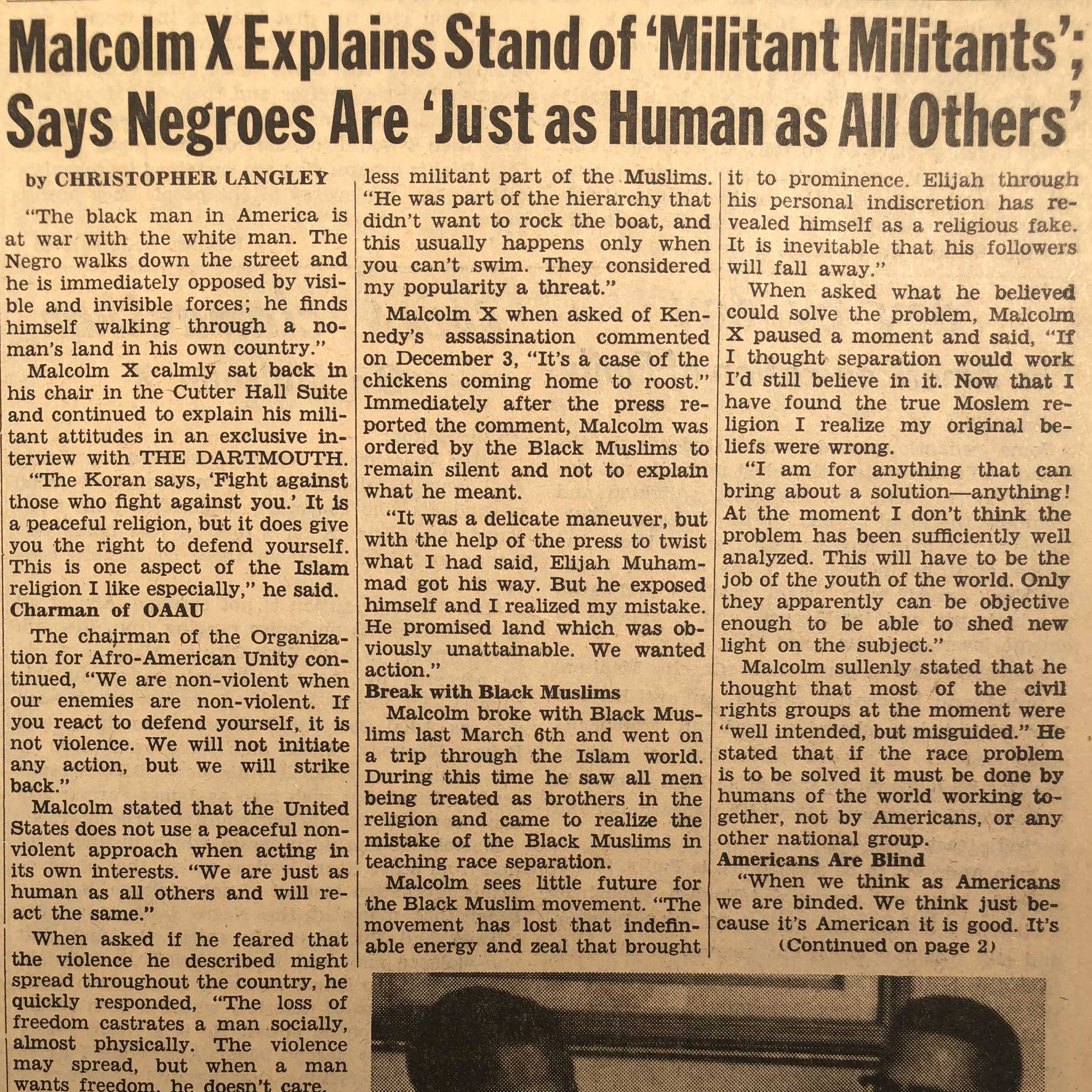 In this exclusive interview for Dartmouth’s student newspaper, Malcolm X explains the inspiration he derives from his Muslim faith, why he broke with the Black Muslim movement, why he believes American Civil Rights groups are “well intentioned, but misguided,” and his work with the Organization for Afro-American Unity. 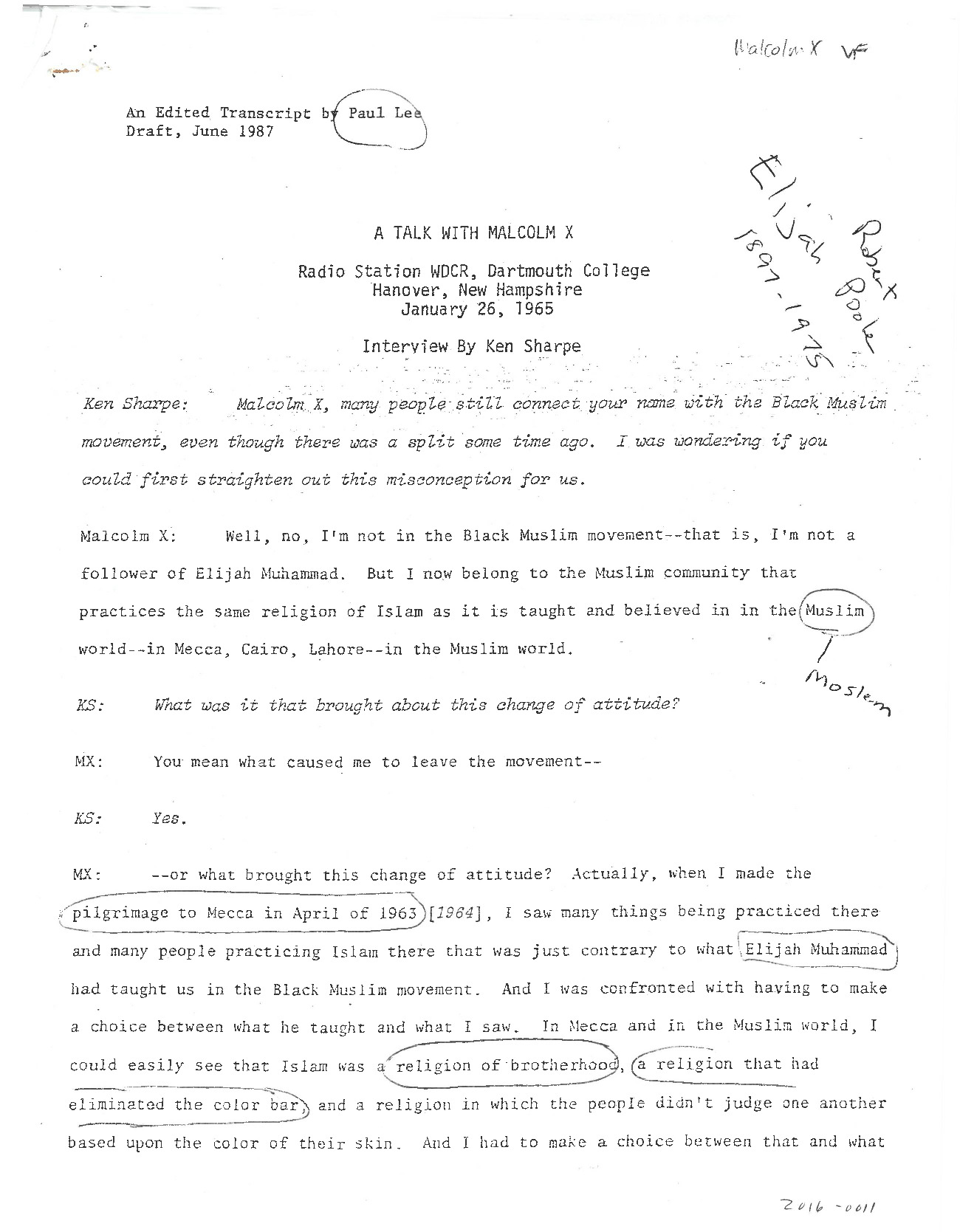 An edited transcript of Ken Sharpe's WDCR interview with Malcolm X on January 26, 1965. 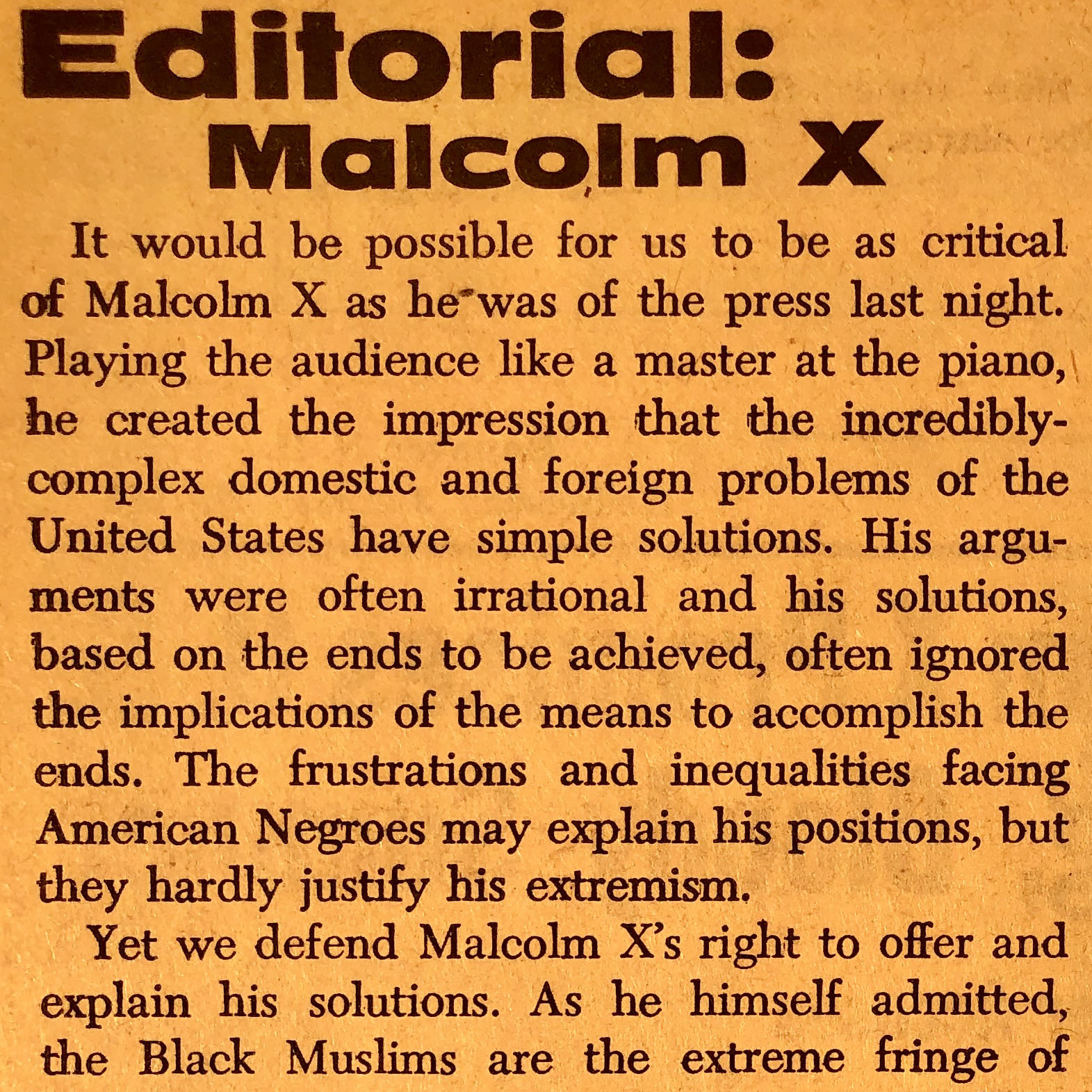 This response to Malcolm X's lecture critiques the "extremism" of Malcolm X and the Black Muslims as fringe participants in the Civil Rights Movement. While the author defends Malcolm X's right to put forth his arguments, they choose to praise him and his followers for liberalizing the movement, thereby normalizing "moderate" groups with achievable goals, such as the NAACP, CORE, and Urban League. 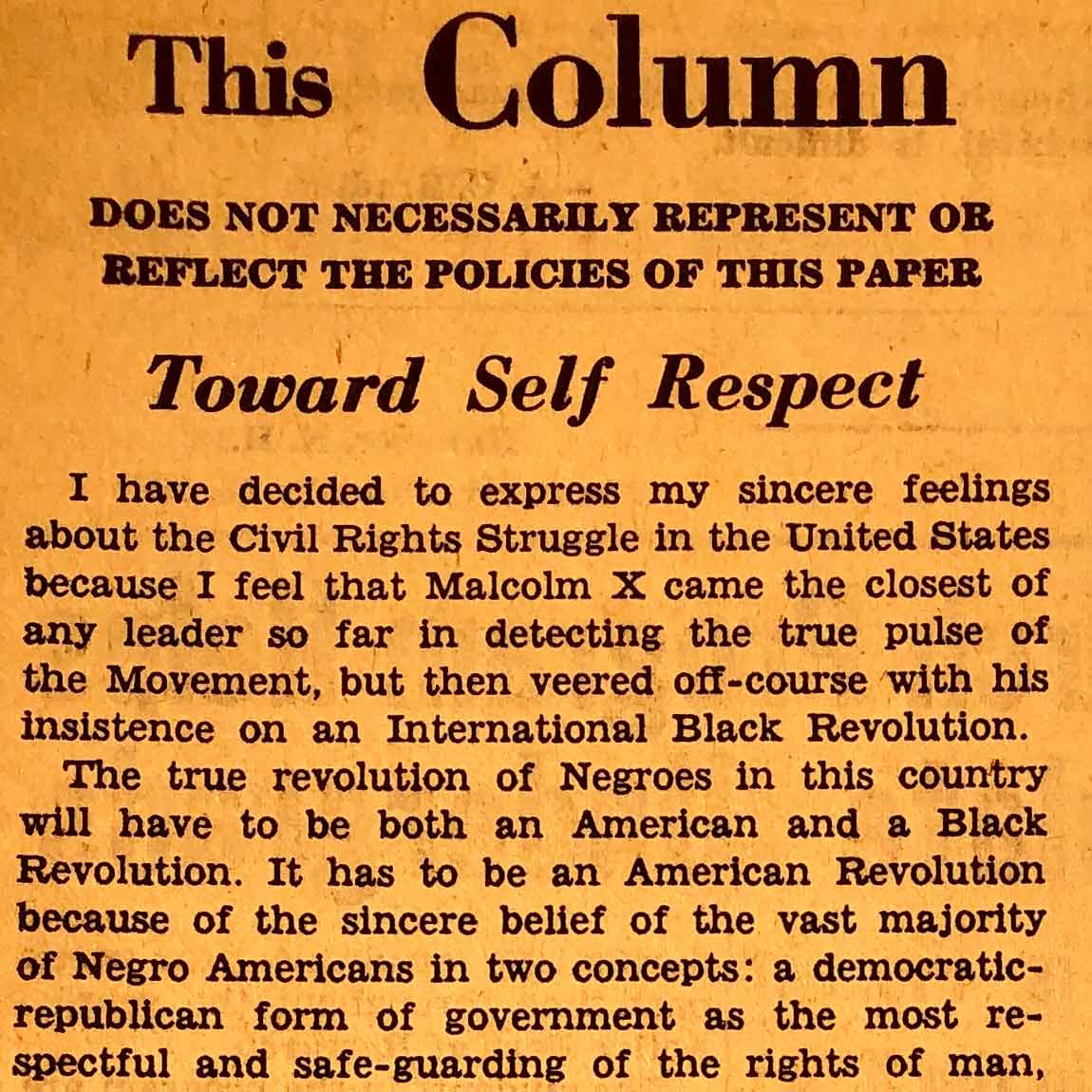