Rising Through the Ranks

Croasdale continued as a Technical Assistant in the Department of Zoology until 1952, fourteen years after she took the job in 1938.  Despite being older and more educated than some of her male colleagues, Croasdale was still not able to advocate for promotions, raises, or even more responsibility—and she had plenty to keep her occupied. She was tasked with making slides and instructional materials for a variety of classes in the department, keeping the supplies organized, retrieving materials, and overall ensuring that the department was running smoothly.

In 1959, Croasdale asked for a meeting with Deputy Provost Leonard Rieser in which she voiced her growing frustrations with her situation in the department. She focused on the lack of time available to conduct her own research instead of complaining about the amount of work or the disrespect she faced among her peers.

This meeting was hardly the dramatic climax after decades of mistreatment—the conversation was simple, quiet, and lasted around an hour in her Silsby Hall office—but Croasdale made a powerful ally in Rieser that day. Their meeting began an investigation by Rieser and his colleagues to prove Croasdale deserved a promotion, an investigation of which she remained mostly unaware.  Fortunately, Rieser and Arthur Jensen, then Dean of Faculty, left behind a detailed paper trail of their own exchanges discussing the matter, as well as letters to the most powerful men in the Zoology Department, attempting to corroborate how Croasdale had described her situation.

“Dr. Croasdale had the misfortune of being a woman... in the Depression, she accepted a position as a technician in the Zoology Department even though her Ph.D. and obvious scientific competence warranted a much better job... There is no question of her scientific competence. Copenhaver told me that she is one of the half dozen best algologists in the country.”

As responses to his memo trickled in, Rieser sprang into action. He collected these opinions and assembled them for the Dean’s Files in Parkhurst Hall, materials he referred to in shorthand as the “Croasdale Memos.” Shortly after the meeting in her Silsby office, Croasdale received word in a letter from Dean Jensen that she was being promoted to Research Associate with the rank of Assistant Professor.  As a result of Leonard Rieser stirring the pot, she received several subsequent promotions, becoming the first tenured female faculty member at Dartmouth in 1964.  She achieved the rank of full Professor of Biology in 1968, just shy of her retirement. 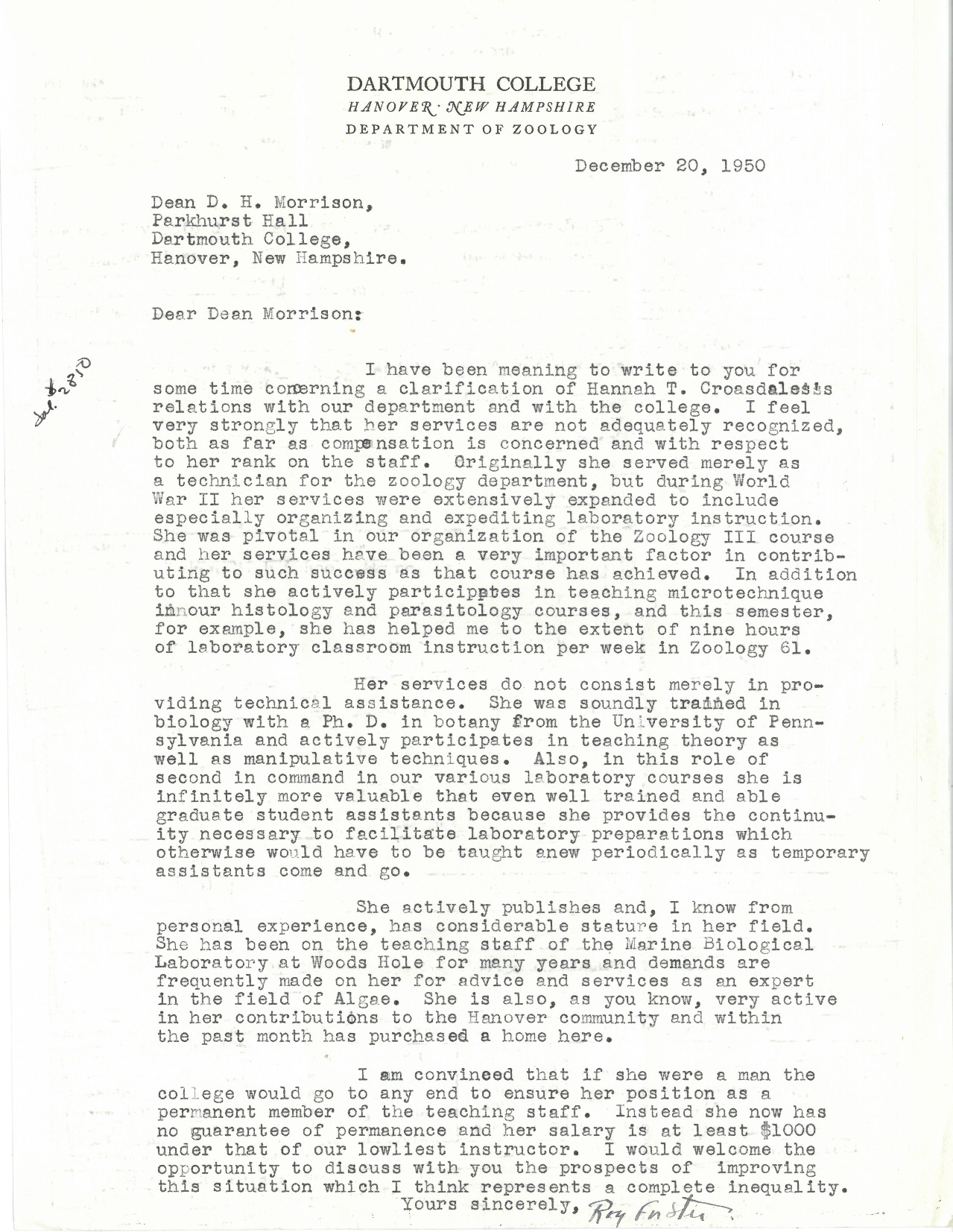 Prof. Roy Forster writes to Donald Morrison, Dean of the Faculty regarding Hannah Croasdale's rank and compensation in the Zoology Department, which he considers inadequate. He notes that, “I am convinced that if she were a man the college would go to any end to ensure her position as a permanent member of the teaching staff.” 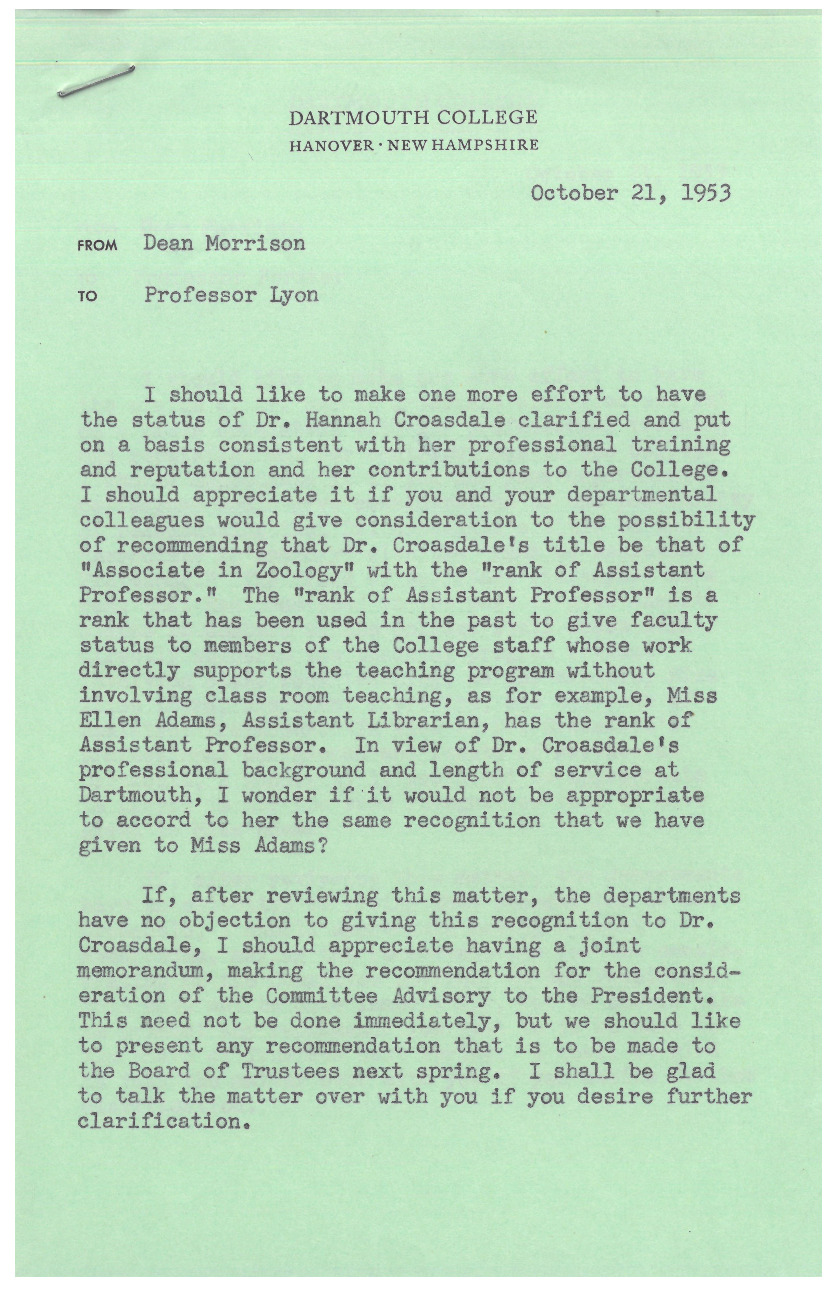 Prof. Charles Lyons writes Donald Morrison, Dean of the Faculty, regarding clarification of Hannah Croasdale's position in the Zoology Department, which he believes to be inconsistent with “her professional training and reputation and her contributions to the College.” 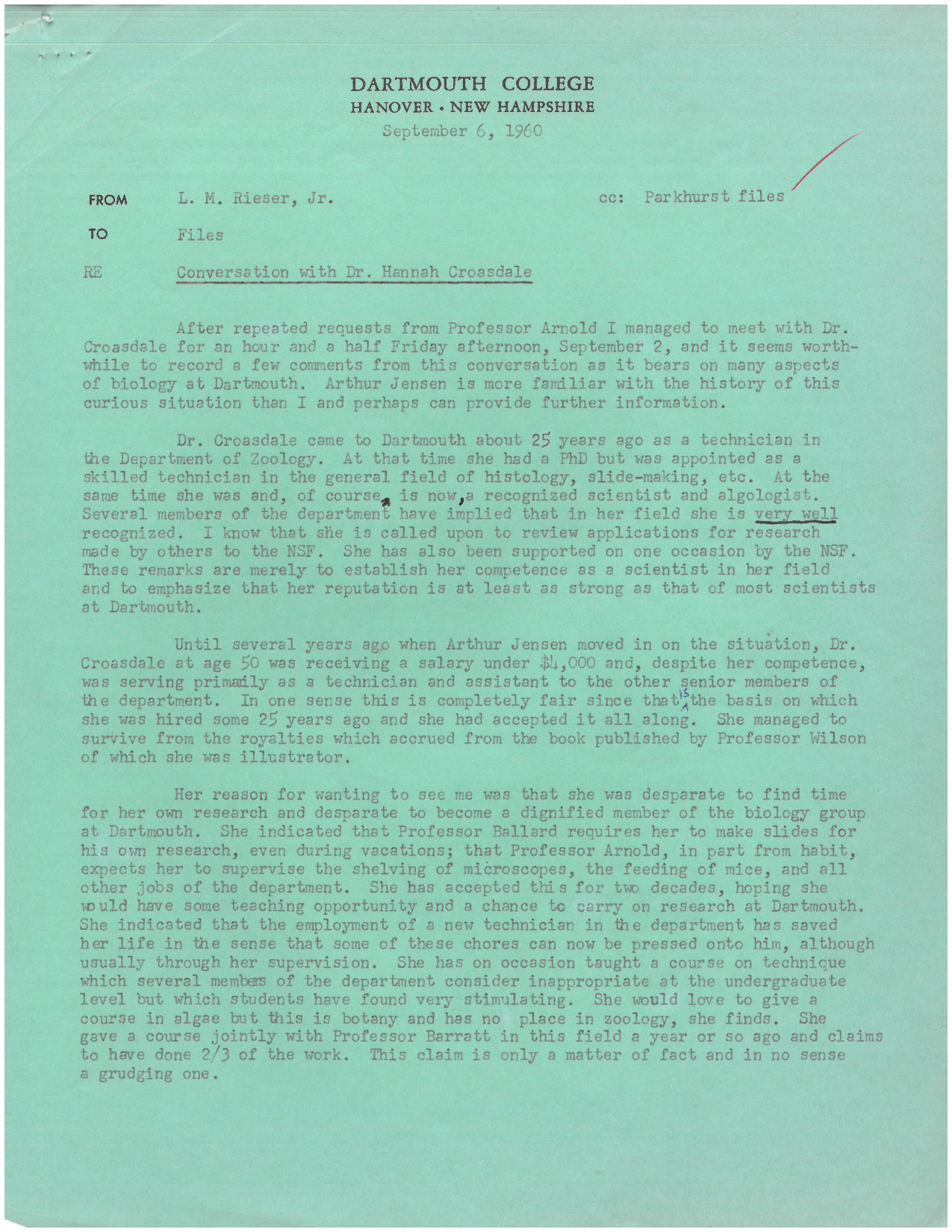 Memo by Leonard Rieser following a conversation with Hannah Croasdale, which led to the creation of “The Croasdale Memos.” Rieser opines that “[Croasdale] seeks no special favors but rather equality commensurate with her scientific ability and reputation.” 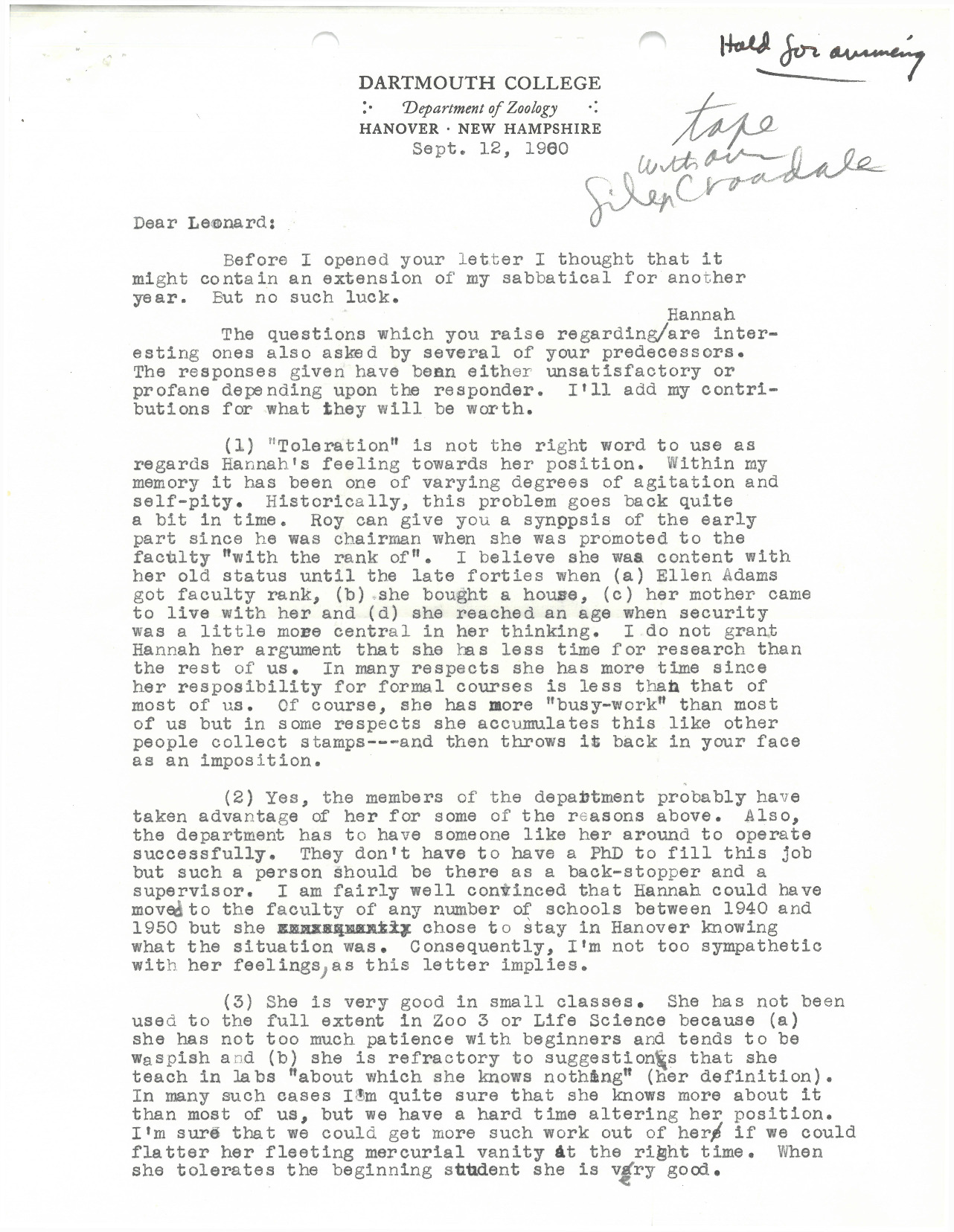 This letter by Prof. J.H. Copenhaver is a strangely mixed bag. Despite Copenhaver’s more incendiary remarks about Croasdale's alleged “fleeting mercurial vanity,” he clearly finds her a brilliant scientist and later became one of Hannah’s more vocal allies in the department. 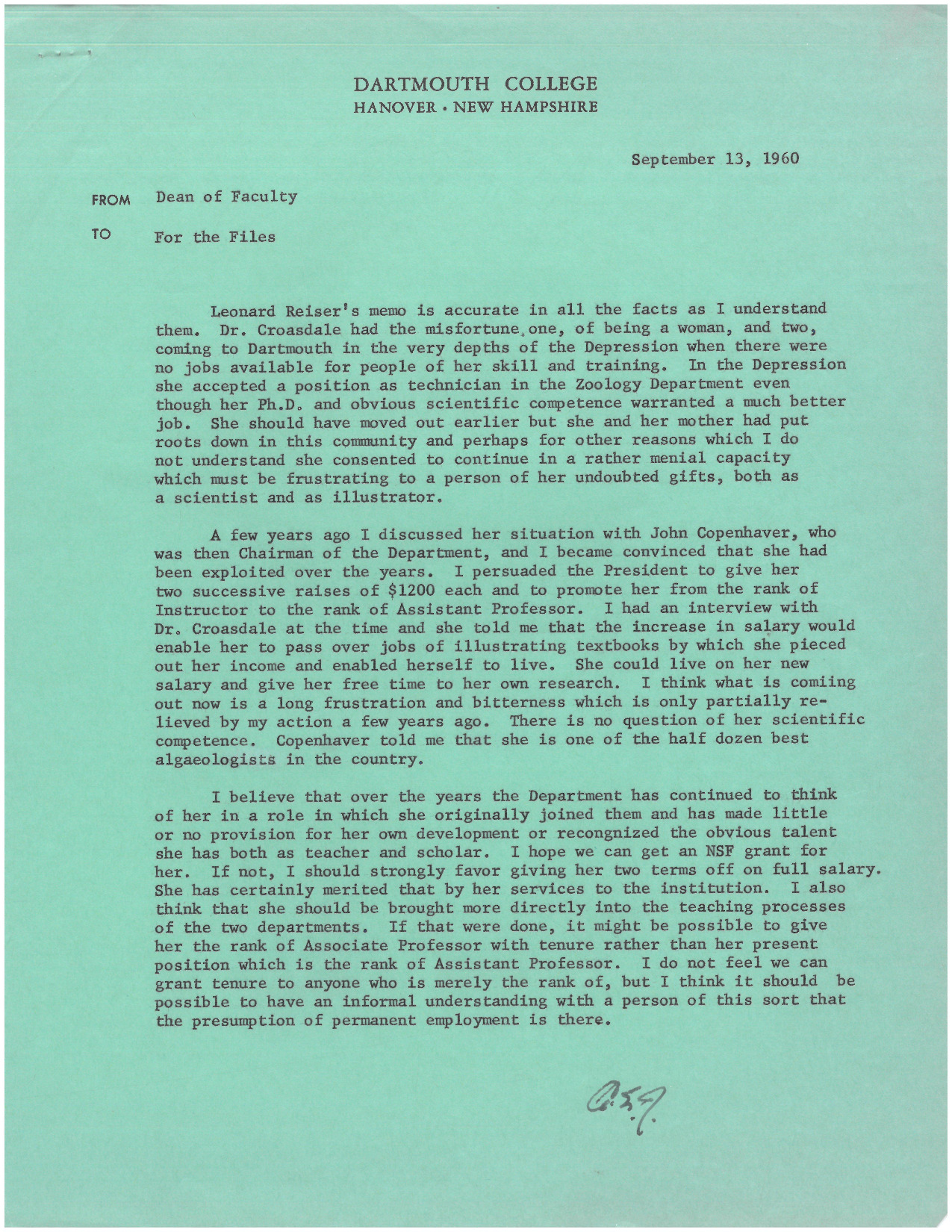 The Dean of the Faculty responds to the “Conversation with Dr. Hannah Croasdale” memo, in which Leonard Rieser asked him to provide more information regarding Prof. Croasdale's history and treatment in the Zoology Department. 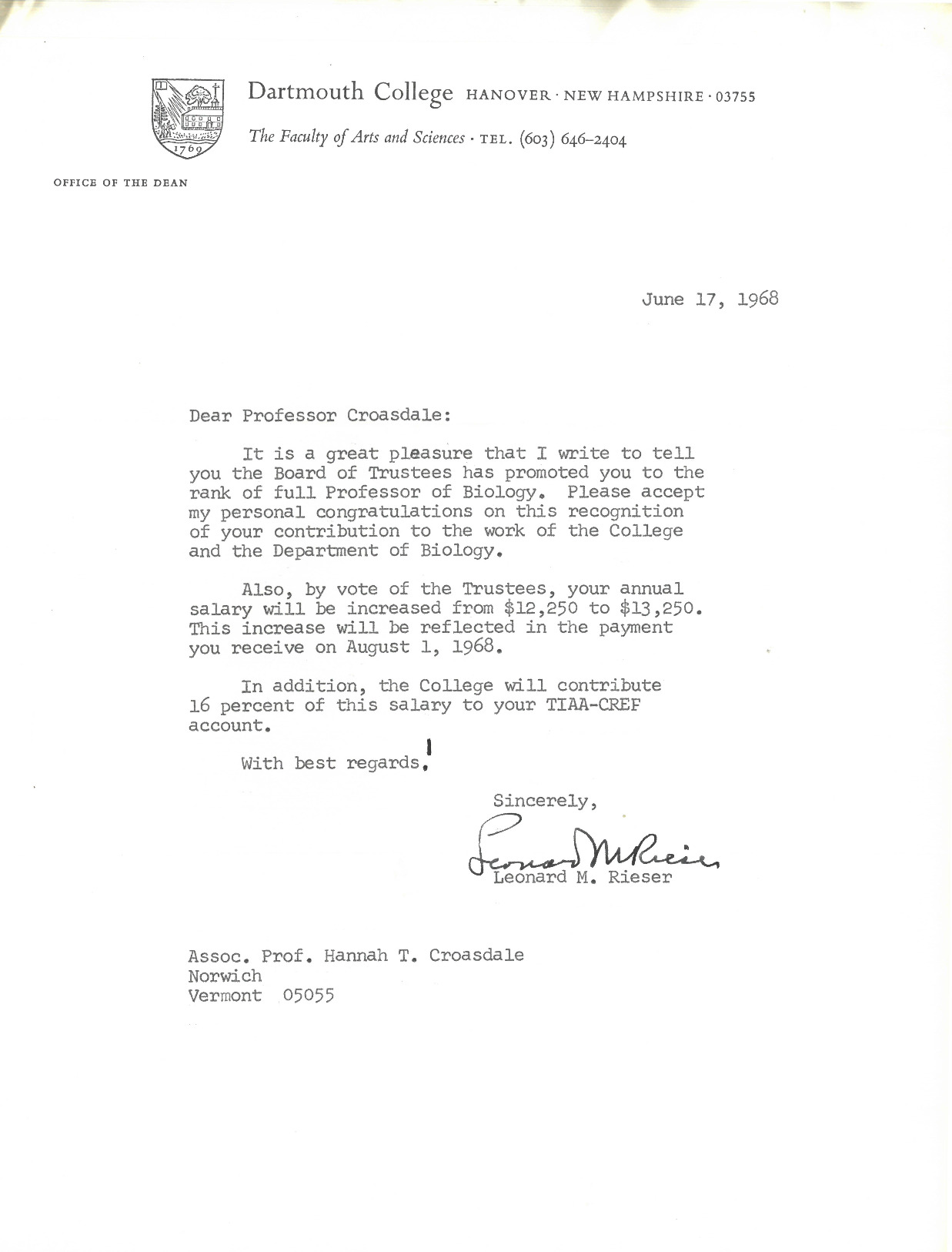 Leonard Rieser, Dean of the Faculty, informs Hannah Croasdale of her promotion to the rank of full Professor of Biology, making her the first tenured female faculty member at Dartmouth. Prof. Croasdale's copy includes the addition of an exclamation point after Rieser's salutations, giving insight into their friendly relationship. 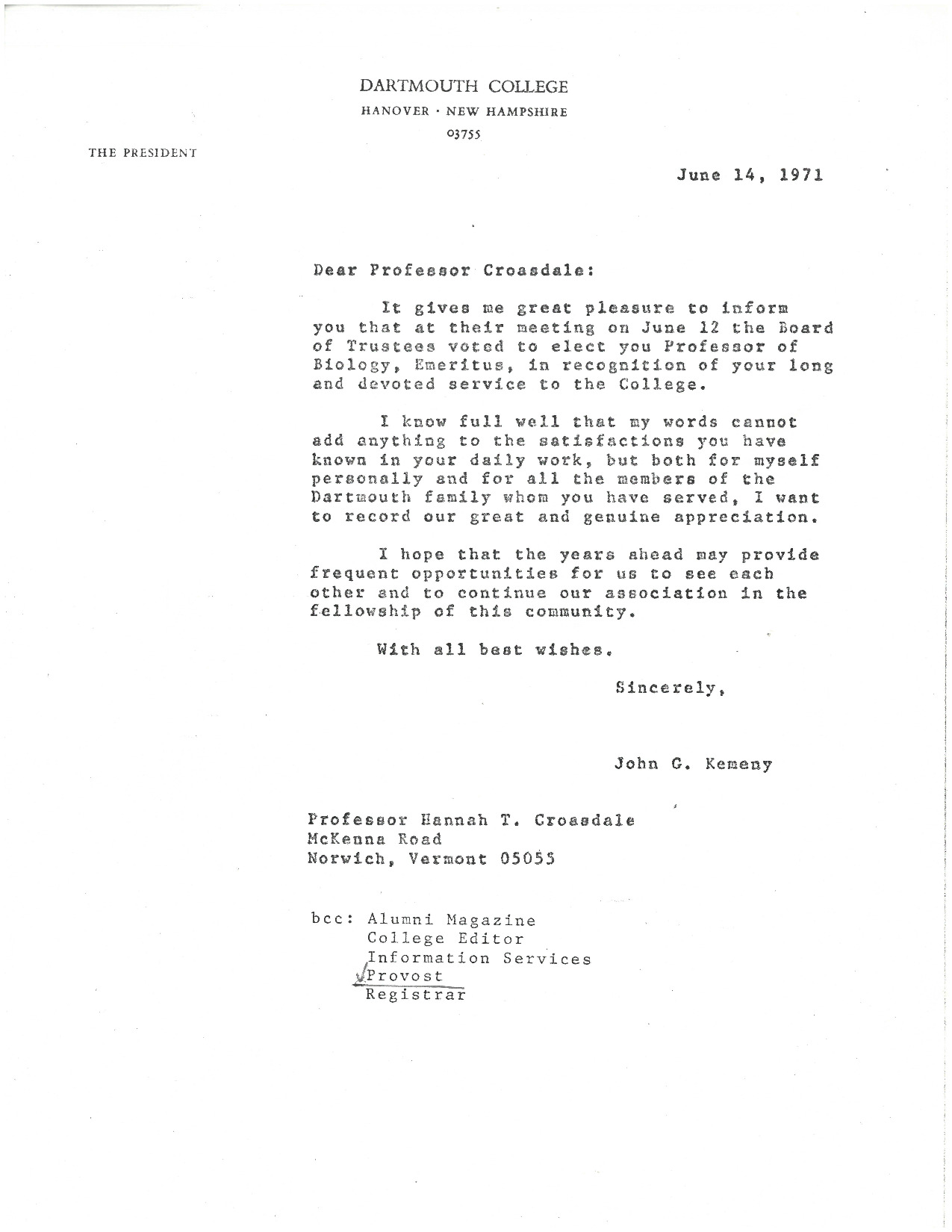 President Kemeny writes to Prof. Croasdale informing her of the Trustee's decision to elect her Professor of Biology, Emeritus. He adds that “for myself personally and for all members of the Dartmouth family whom you have served, I want to record our great and genuine appreciation.”