What would you do if your college allowed a speaker to come and give a lecture about how your identity made you genetically inferior? In 1969, Black students at Dartmouth were forced to confront that very question.

Dr. Shockley, a nobel prize winner and professor at Stanford University, was invited to Dartmouth as part of the Fall term meeting of the National Academy of Sciences, which was to be held at Dartmouth. Shockley had requested the opportunity to deliver his contributed paper on psychometrics, which suggested that there might be genetic differences in intelligence among races. Under the constitution of the Academy, any member is entitled to deliver a paper at a regular meeting at his own request, and thus Shockley was scheduled to give the controversial lecture, titled “The Offset Analysis of Racial Differences.”

On October 15, 1969, as Shockley began his speech, 25-30 Black students stood up and applauded for him, along with the rest of the audience. However, 17 Black students refused to sit down and did not stop applauding, preventing Shockley from giving his speech.

Like protests against George Wallace a few years prior, the reaction to the student demonstration against Shockley created considerable controversy both in and outside of the Dartmouth community. In the aftermath, the Judicial Advisory Committee for Black Students (JAC), of which Prof. Errol Hill was a member, released a 29-page report that argued that no college penalty should be assessed and the students who participated in the clapping demonstration should have their disciplinary charges dismissed. The committee justified its defense of the students on the basis that Shockley’s speech was ‘group libel’ and therefore not protected under the United States Constitution or the college “equal opportunity” priniciple.

In the end, all 17 students were suspended for one term without restrictions. Every member of the JAC resigned in a protest of their own, but the College stood by its decision to suspend the students. 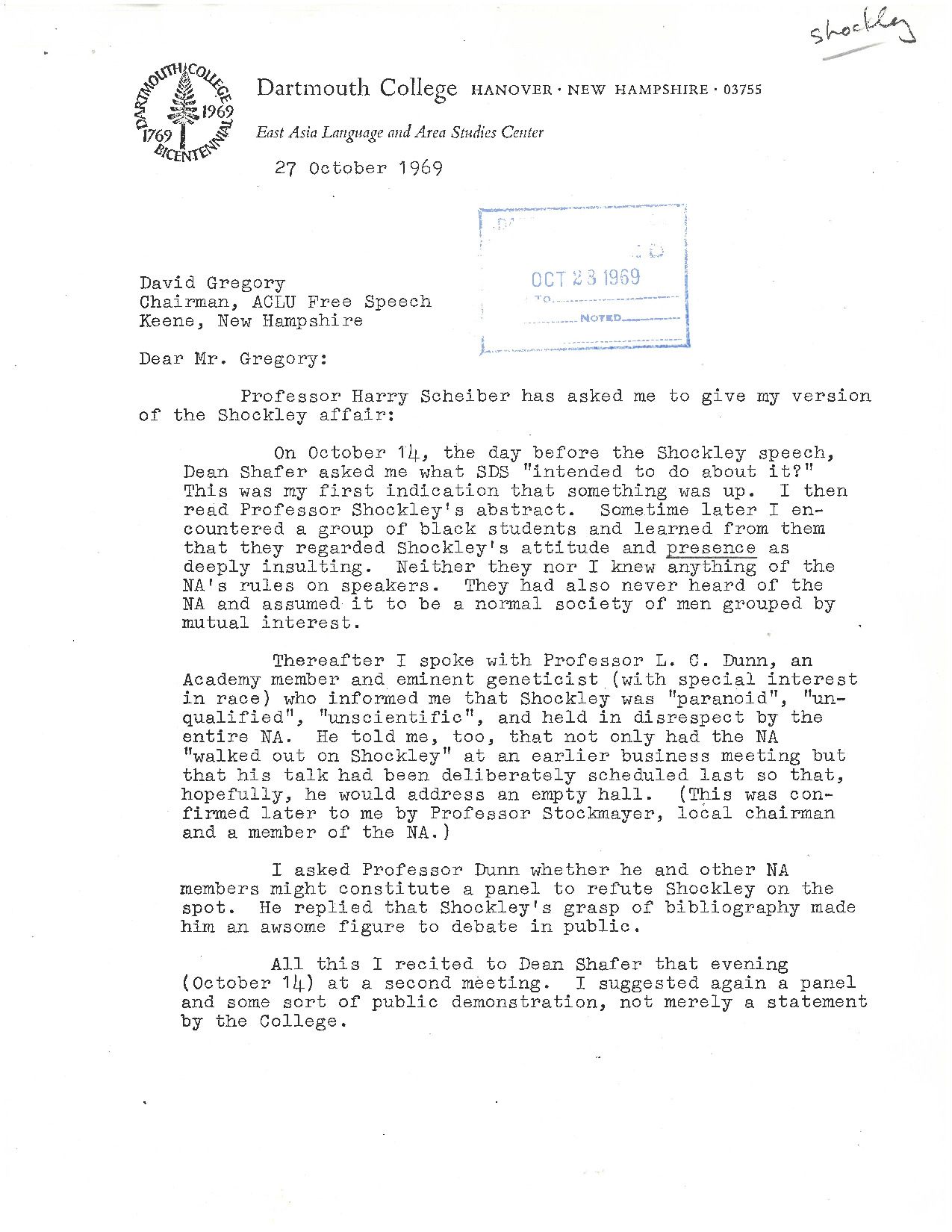 Prof. Jonathan Mirsky gives his perspective of the Shockley Incident to David Gregory, American Civil Liberties Union's Chairman on Free Speech. He explains that the National Academy themselves viewed Shockley with disdain, and concludes with the assessment and opinion that “by merely clapping, the blacks showed moderation [while] [t]he whites displayed inertia, insensitivity and perhaps a bit of cowardice.” 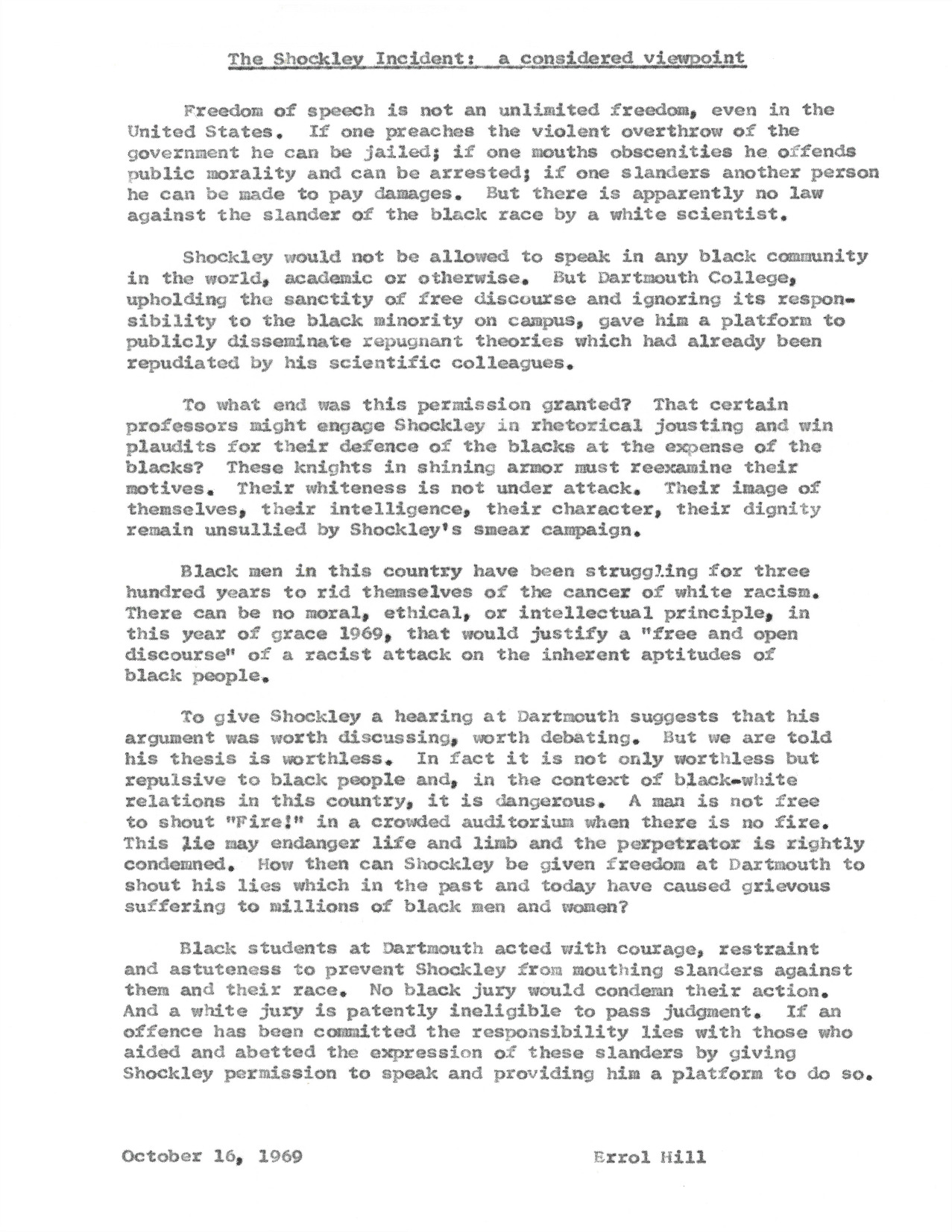 Dartmouth professor, adviser to the Afro-American Society, and Affirmative Action Officer Errol Hill posits that Nobel prize winner William Shockley should not have been permitted to present his controversial paper at Dartmouth. He expresses his support for Dartmouth students who used peaceful protest to drown-out Shockley’s presentation. 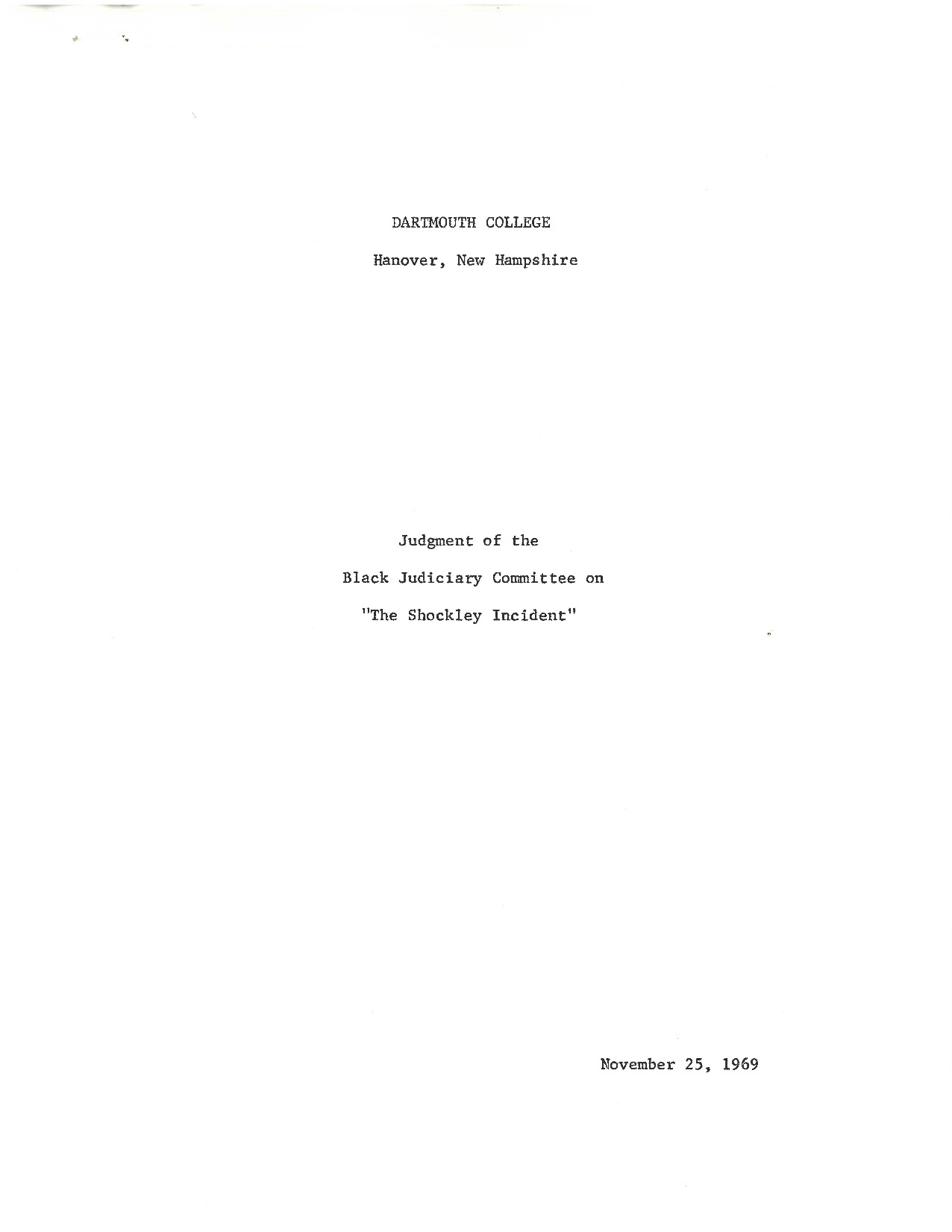 Members of Dartmouth’s Black Judicial Advisory Committee (JAC) recommend that no penalty be incurred against the Black students who participated in a clapping demonstration during a presentation by Dr. William Shockley on the basis of group libel. Committee members ask that Dartmouth clarify rules governing campus behavior, and call upon the Dean of the College and alumni to reconsider their view that protesters undermined their fight for equality by violating principles of free speech. 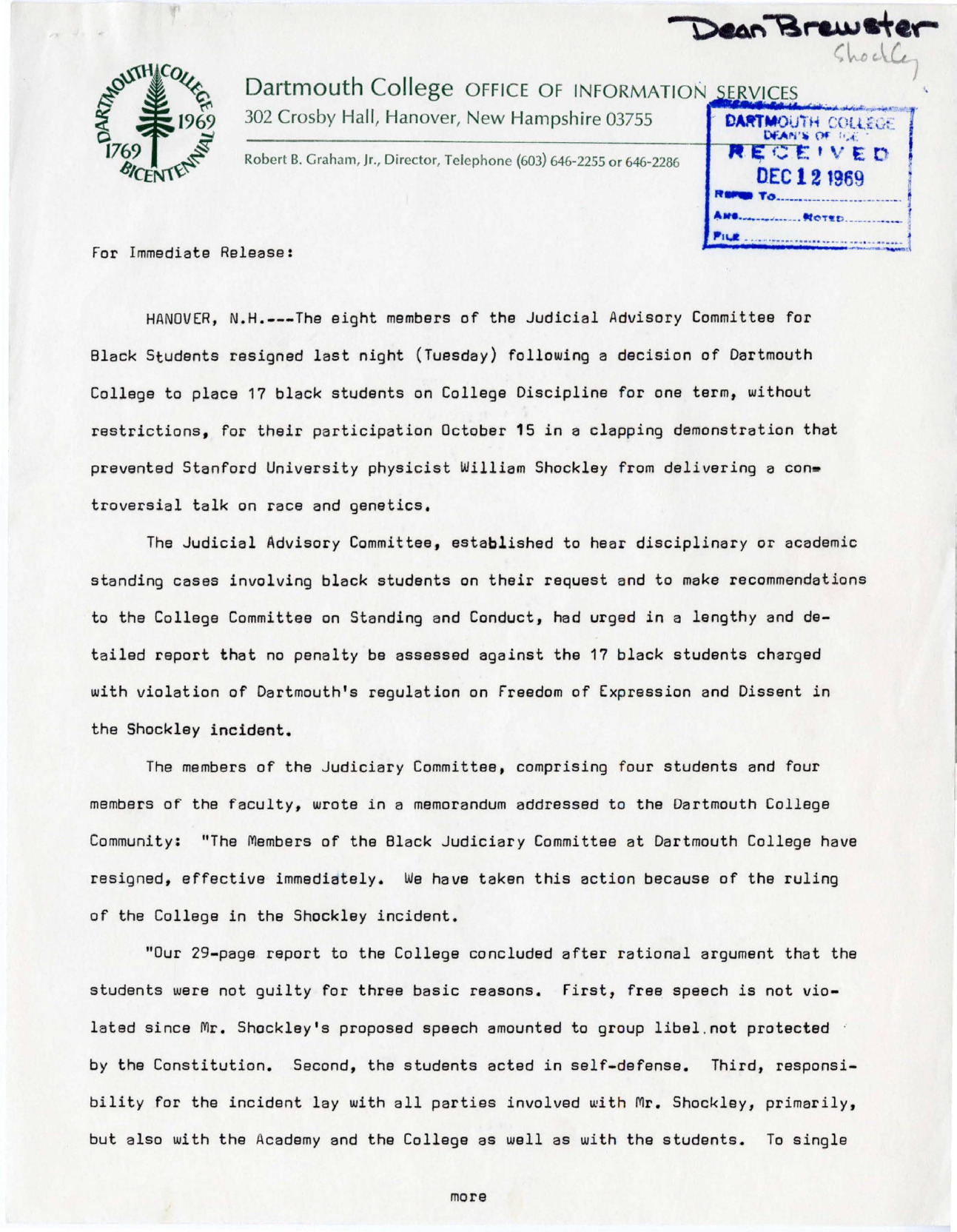 This press release announces the resignation of the members of the JAC for Black Students following the decision of the College to take disciplinary action against the 17 Black students for their role in the clapping demonstration against Shockley. The statement explains that the decision to dissolve was made in part due to the College’s failure to answer any of the arguments put forth by the committee, therefore demonstrating that “further activities of the Black Judiciary Committee [are] futile” in conversations about race relations at Dartmouth. 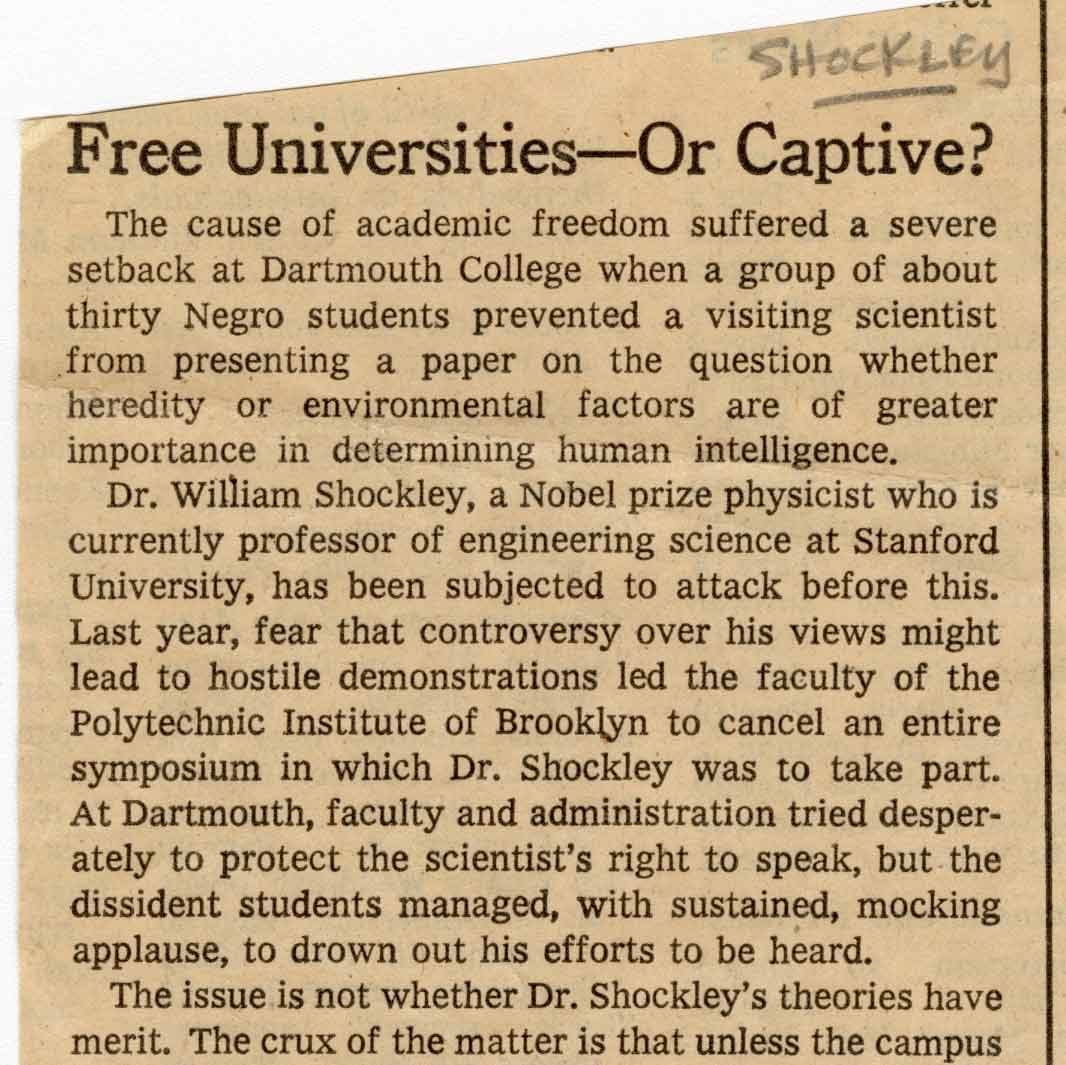 This New York Times opinion piece argues that the recent wave of demonstrations against Shockley represent a trend in diminishing “academic freedom.” The author argues that the increasing number of “politicized” demonstrations across American universities against racist speakers threatens the ability of campuses to “be kept open as forum(s) of ideas, no matter how controversial.” 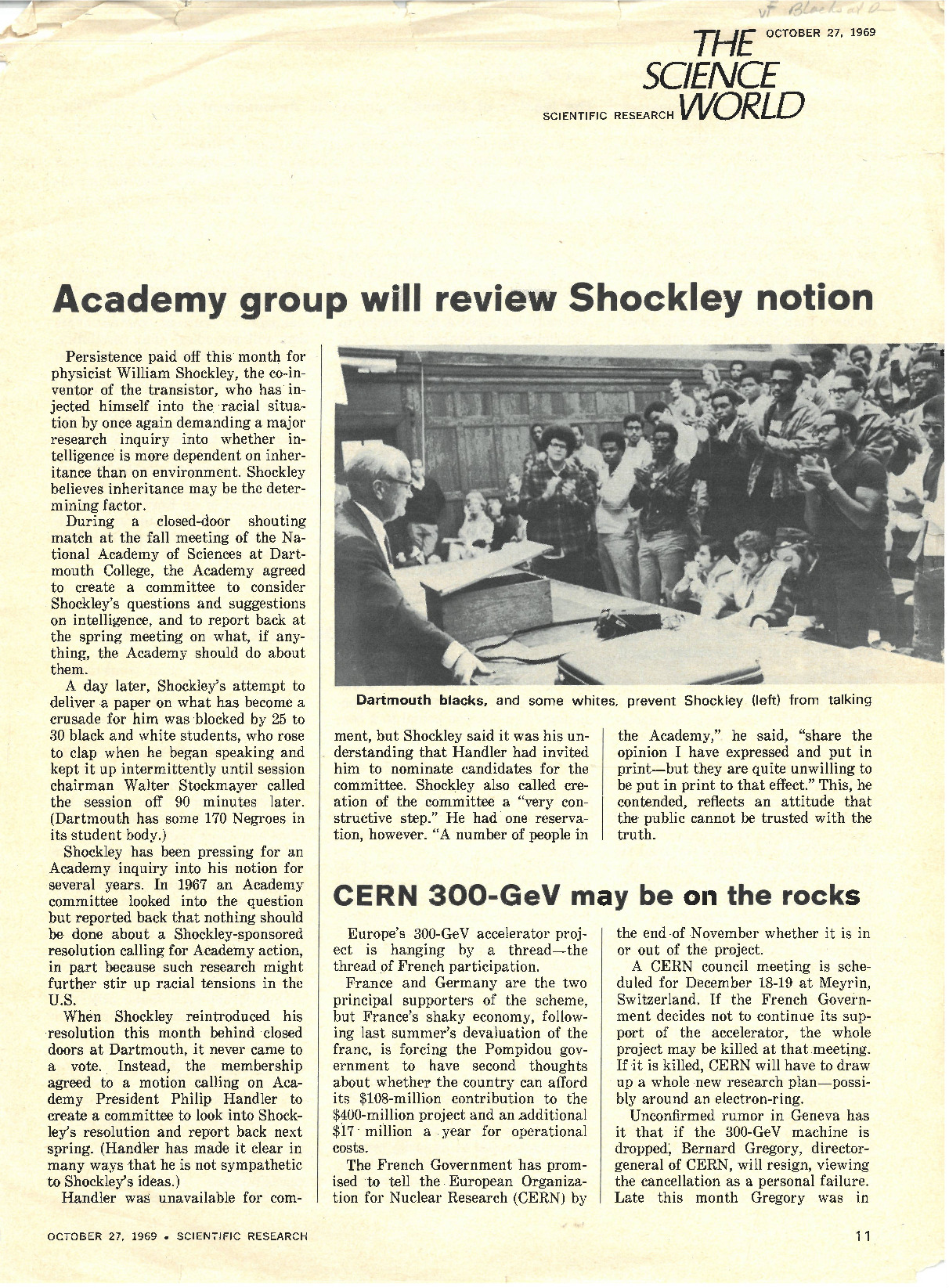 This article in Science World describes how the National Academy of Sciences created a committee to investigate whether human intelligence is more dependent on inheritance (i.e. race in this context) or on the environment, upon the request of physicist William Shockley. The article also details Shockley’s attempt to present a controversial paper examining correlations between IQ and race at Dartmouth, and how it was successfully halted by a group of 20-30 Dartmouth students. 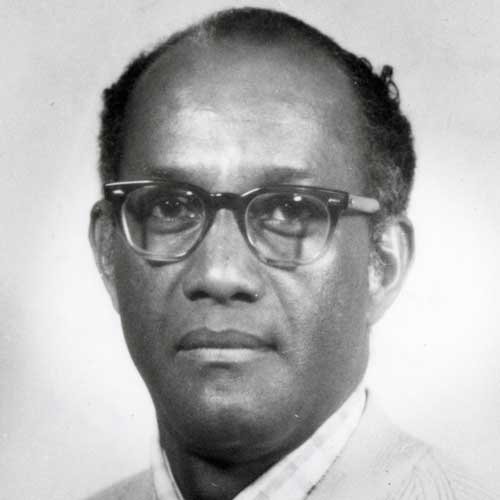 The oral history interview of Errol Hill runs for approximately two hours and includes the memories of Professor Hill and his wife, Grace Hill, of the climate for Black people living in Hanover and working at Dartmouth.