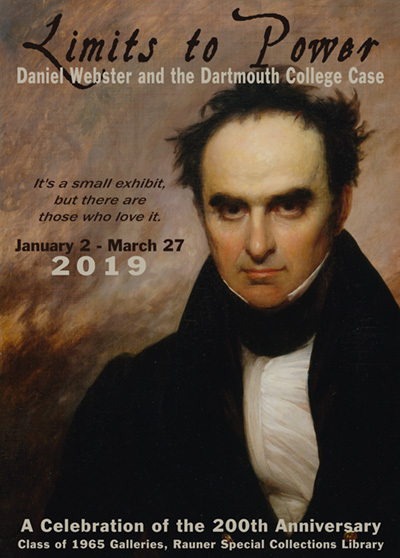 In addition, the case is one of several that is still cited today as the basis for the protection of corporate persons under the Constitution. Justice John Marshall’s opinion in this case has been cited by the dissent in recent Supreme Court cases such as Burwell v. Hobby Lobby and Citizens United v. FEC.

This case also solidified Daniel Webster’s, Class of 1801, already significant reputation as a constitutional lawyer. Webster was only 37 years old at the time, and his oratorical style, persuasive argument, and keen sense of strategy vaulted him to fame. Webster would go on to argue some 170 cases before the Supreme Court during his lifetime, but none are as well-known as this one.

While the emotional pull of his peroration, and the often-quoted line from it “It is, Sir, as I have said, a small college. And yet there are those who love it!” is the focus within the College community, it was his strategic decision to argue the case of corporate personhood based on English common law that won the day. Chief Justice Marshall had used this argument himself several times, both as a lawyer and in judicial opinions. It is likely that Webster was aware of this and made a conscious decision to cast his argument in a light that would appeal to the justices and to Marshall in particular.

Next: Dissent and Discord

"Limits to Power" was curated by Peter Carini with research assistance from Allison Gelman, '18.  Omeka-S exhibit by Victoria Corwin and Madeline Miller.  A special thanks to Jed Sorokin-Altmann '05 for his consultation on issues related to Constitutional law.