George Ticknor played a leading role in the establishment of the study of modern languages in North America. While a student in Europe, Ticknor was invited to be the inaugural Smith Professor of French and Spanish Languages and Literatures at Harvard College, where he taught until 1835. To prepare for this position, Ticknor left his studies at the University of Göttingen in Germany and traveled to France, and later Spain, to dedicate himself to the intensive study of French and Spanish literatures. During this period, he developed a passion for the literature of Golden Age Spain. That, coupled with his collecting of Spanish-language materials, led Ticknor to produce the three-volume History of Spanish Literature (1849), later translated into Spanish and other languages. This work was unparalleled for providing a comprehensive study of authors such as Miguel de Cervantes, Lope de Vega, Calderón de la Barca, and others. His collecting habits allowed him to amass the most significant library of Spanish literature in the United States in the nineteenth century.

Hispanism refers to an academic discipline and intellectual practice devoted to the study of Spanish and the literature and cultures of the Spanish-speaking countries and regions. 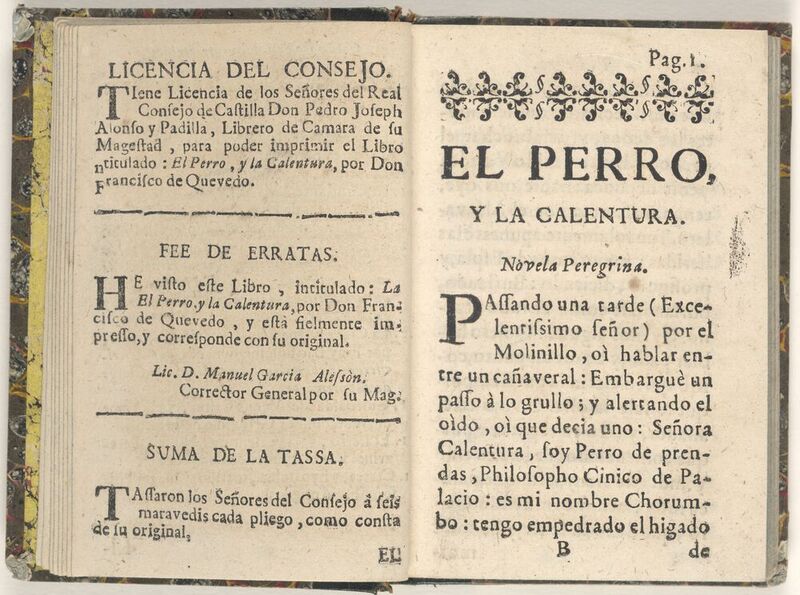 Ticknor includes a lengthy discussion of La Celestina, by Fernando de Rojas, in his History of Spanish Literature. Writing of one of the most important texts of the late medieval and early modern period, Ticknor’s analysis reveals the influence of his Boston Brahmin milieu: “The great offence of the Celestina, however, is, that large portions of it are foul with a shameless libertinism of thought and language. Why the authority of church and state did not at once interfere to prevent its circulation seems now hardly intelligible.” 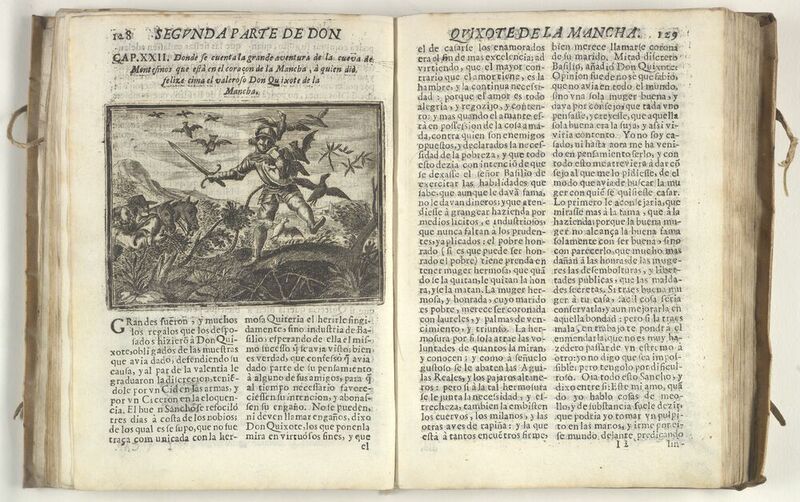 Engraving depicting Don Quixote’s descent into the Cave of Montesinos. 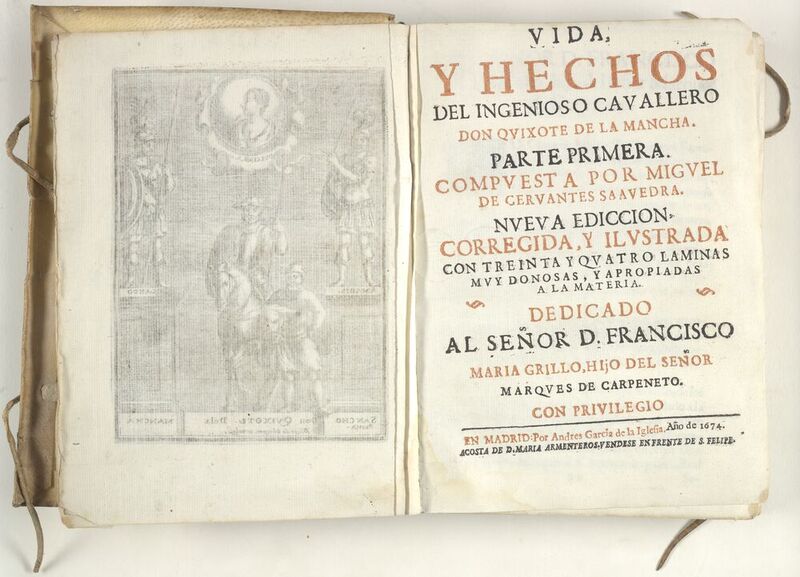 Ticknor revered Miguel de Cervantes' Don Quixote. In his journal, he noted, "We slept at Alcalá de Henares, the Complutum of the Romans, the place where the famous Polyglot was printed, and, what is more to me than all this, the birthplace of Cervantes, the unimitated, the inimitable Cervantes." 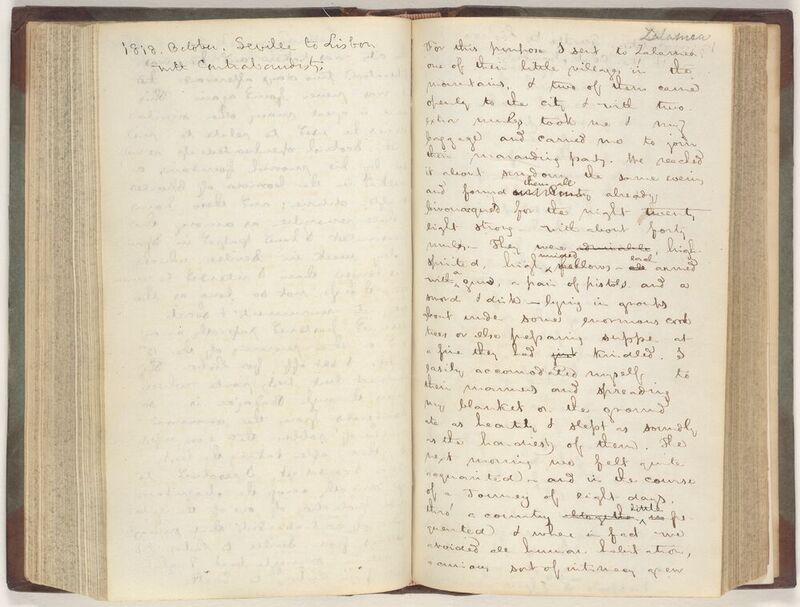 In this passage, Ticknor seems to relish what he describes as a dangerous journey with contrabandists from Seville to Lisbon. 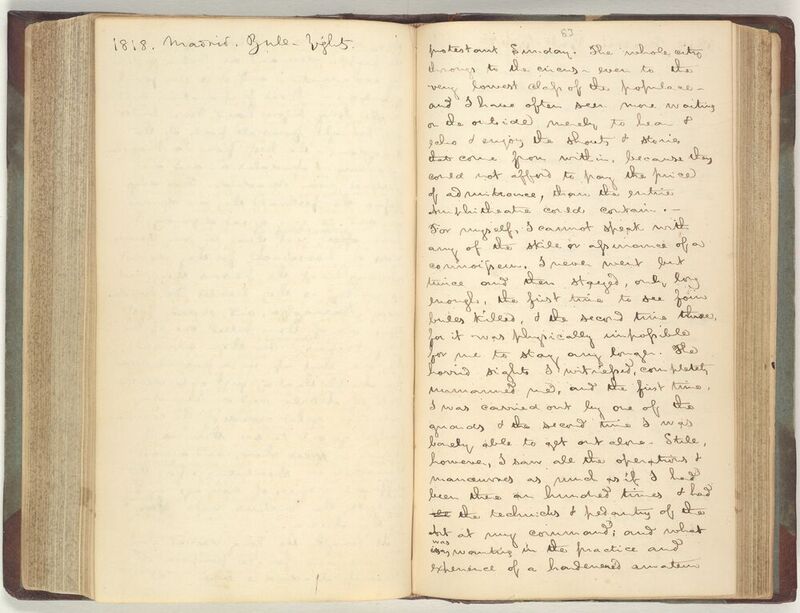 In the entry for "1818 Summer in Madrid," Ticknor dedicates a long passage to bullfighting. Unlike contemporaries such as Washington Irving, Ticknor does not offer a purely romantic portrait of the bullfights. Rather, he describes feeling "unmanned" by them and overcome at the "horrid sights I witnessed." In much of his journal writing, he aims at erudition and educating the imagined reader about the history, geography, or cultural practices of the place he is visiting. In this passage, we encounter a different -- and more human -- side of the author. 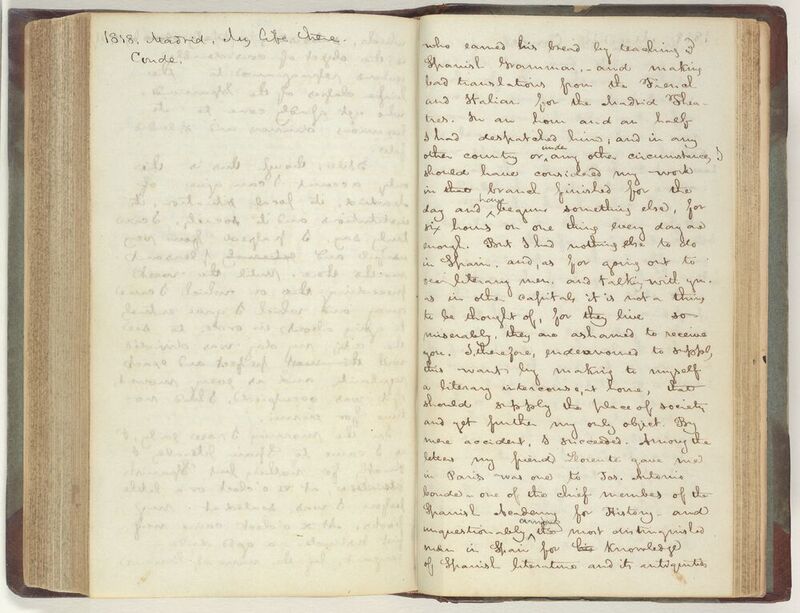 In these journal pages, Ticknor describes his days of study during the summer of 1818 with José Antonio Conde, and other social activities. Ticknor spent long uninterrupted days studying Spanish grammar and literature. "A life," he writes, "better than any I had led in Europe from the complete power it gave me over my own time."

While living in Madrid, Ticknor spent several hours daily under the tutelage of the scholar José Antonio Conde, developing his knowledge of Spanish literature. In this letter of introduction, Conde introduces Ticknor to his associate, John Hookham Frere, an English diplomat and author. 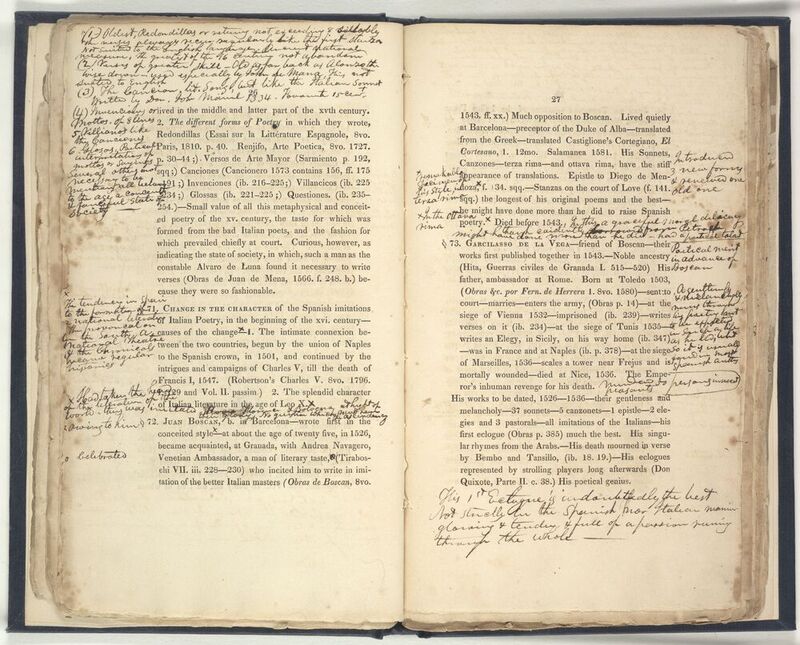 Based on academic lectures delivered to students at Harvard, the Syllabus later informs the History of Spanish Literature, published in 1849. This copy was heavily annotated by one of Ticknor's students in October 1831.

Ticknor's monumental work was an important text in the field of Hispanic Studies for fifty years after its publication. A book of its time, it linked Spanish literature to notions of national character. The text expresses, in the words of scholar Thomas R. Hart Jr., "the Federalist and Unitarian standards of the Boston society in which [Ticknor] played a leading role." 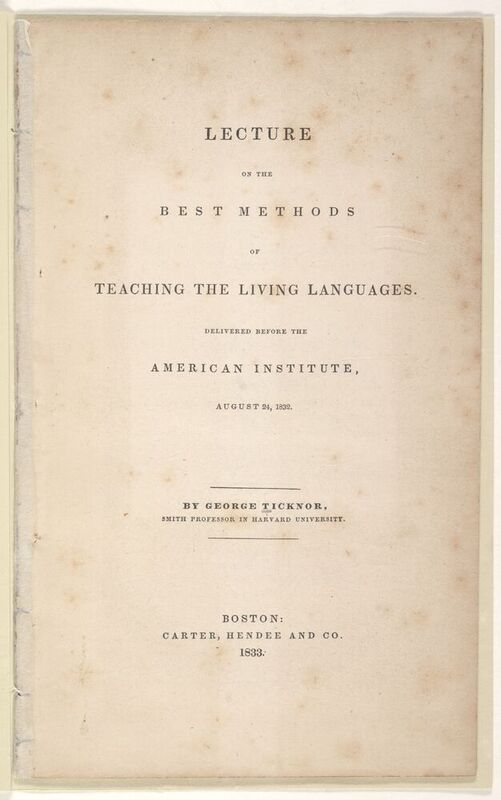 George Ticknor, Lecture on the Best Methods of Teaching the Living Languages, 1833

As a professor at Harvard, Ticknor advocated strongly for reform in pedagogical practices at the university. Unlike the teaching of classical languages, he asserts the value of speaking the modern languages in addition to reading them: "The most important characteristic of a living language, -- the attribute in which resides its essential power and value, -- is, that it is a spoken one."