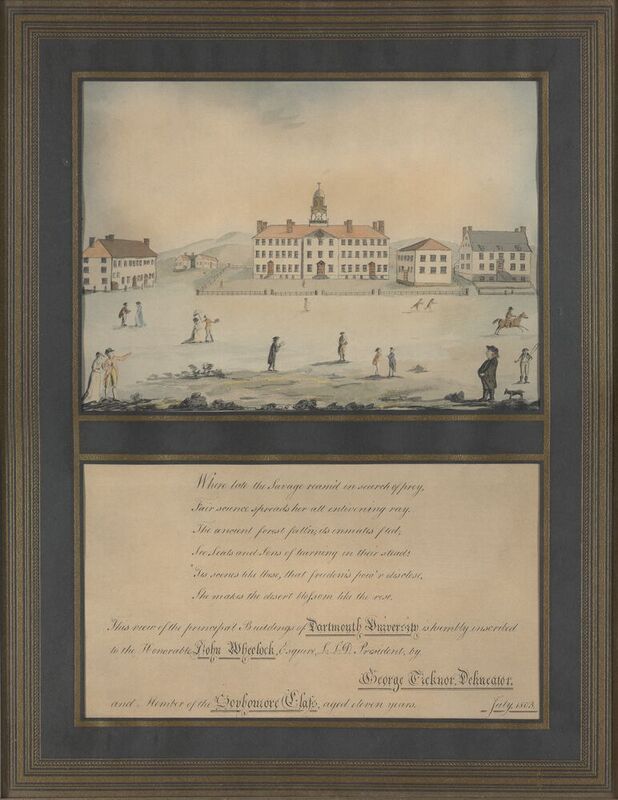 George Ticknor, Dartmouth Class of 1807, embodied the nineteenth-century concept of a "gentleman of letters." After Dartmouth, he studied law, then moved into his real love, language and literature. He became the first professor of modern languages at Harvard and revolutionized the teaching of modern languages and literatures in the United States.

He traveled extensively in Europe, first in 1815-19 to complete his education, again in the mid-1830s with his wife Anna Eliot Ticknor, and a final trip in the 1850s. Empowered by Anna's considerable fortune, the two traveled in style. They reveled in the history and culture of Europe while being suspicious of the entrenched political and social powers that held sway. They were, after all, Americans, and thoroughly invested in the great experiment of a democratic republic. Perhaps most famous for authoring the first history of Spanish literature and being one of the original organizers of the Boston Public Library, he, along with Anna, maintained an active literary salon and amassed a phenomenal personal library, a significant portion of which came to the Dartmouth Library in 1946 and is currently housed in Rauner Special Collections Library.

George Ticknor's father, Elisha Ticknor, grew up on a farm in Lebanon, New Hampshire, and attended Dartmouth in its very early years. After moving to Boston, the proud graduate of the class of 1783 sent his precocious son to Dartmouth. George passed Dartmouth's entrance exam and entered Dartmouth in 1803,  when he was just 11 years old.

Not only did Ticknor amass an impressive private library, he also collected manuscripts and autographs. A highlight of his collection is a poem by Phyllis Wheatley in her own hand, written when she was still enslaved by the Wheatley family in Boston. Also included in his manuscript collection was a letter written by George Washington to the Trustees of Dartmouth College shortly after he assumed the Presidency and a letter from Jean-Paul Marat to Benjamin Franklin.

Among the fascinating artifacts of the Ticknors' travels are their diaries. Both George and Anna kept diaries. Because they often visited the same place on the same day, we have both a male and female assessment of the same event. We can read both George and Anna's accounts of their visit to the novelist Maria Edgeworth.

The Scholar at Home

Ticknor gained international fame for his scholarly work. You can view his notes on Dante's Divine Comedy alongside his letter to King Johann of Saxony concerning his translation of Dante into German. 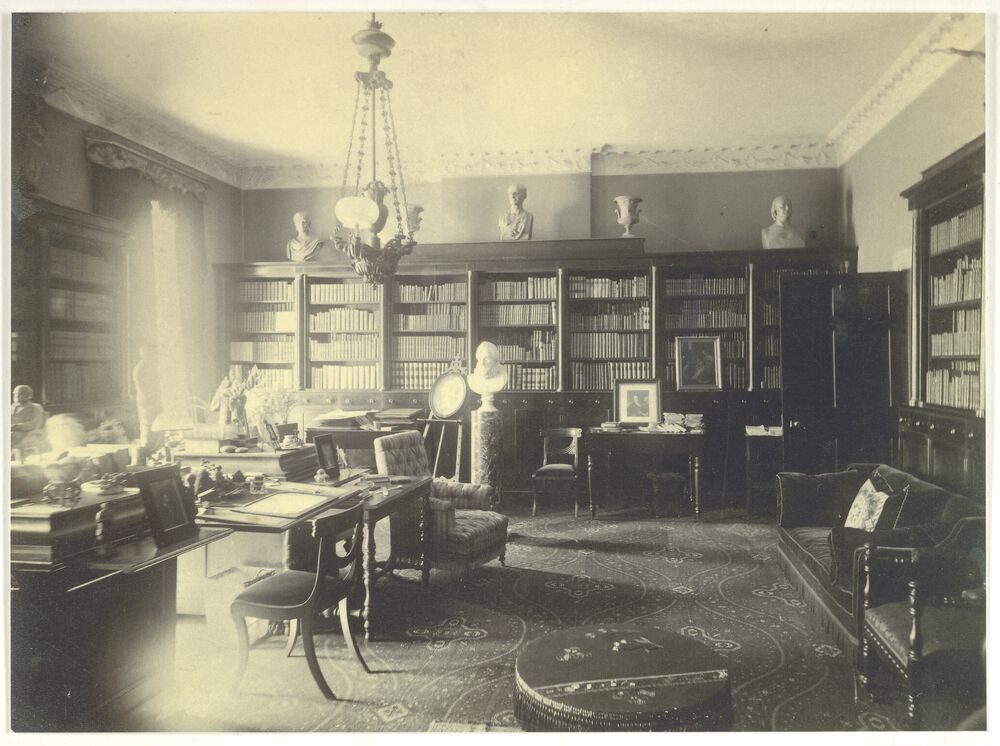 Photograph of Ticknor Library in situ

George and Anna Ticknor entertained America’s literati in their home on Boston’s Park Street across from the Boston Commons. Their library provided the perfect setting for literary salons.

A View of the Principle Buildings of Dartmouth University, 1803

Painted by George Ticknor when he was eleven years old, this is one of the earliest depictions of Dartmouth. 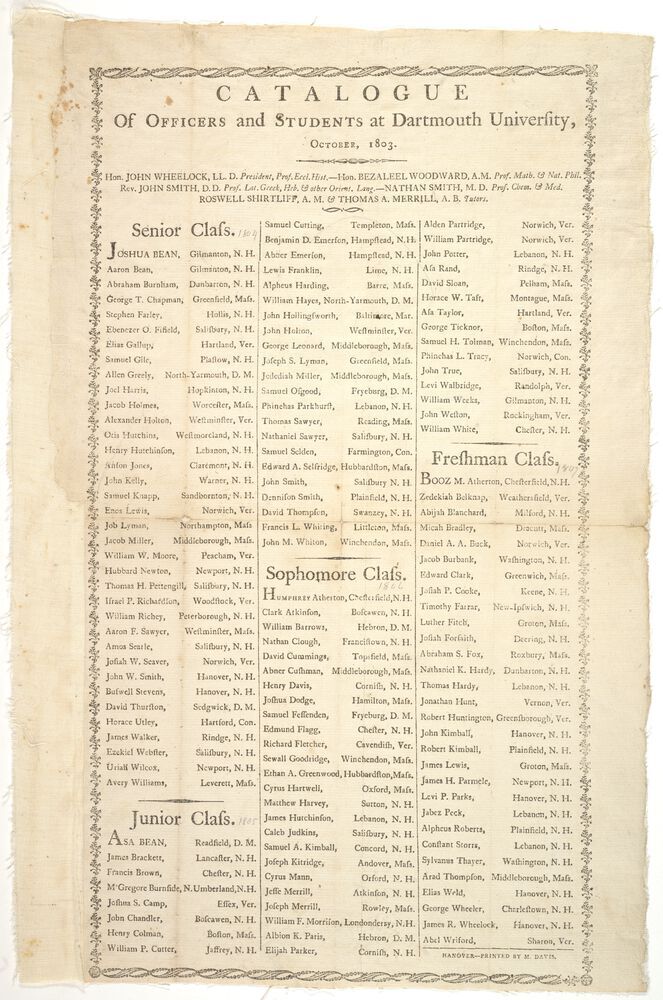 Catalogue of Officers and Students at Dartmouth College, October, 1803

George Ticknor appears in this listing of members of Dartmouth College. 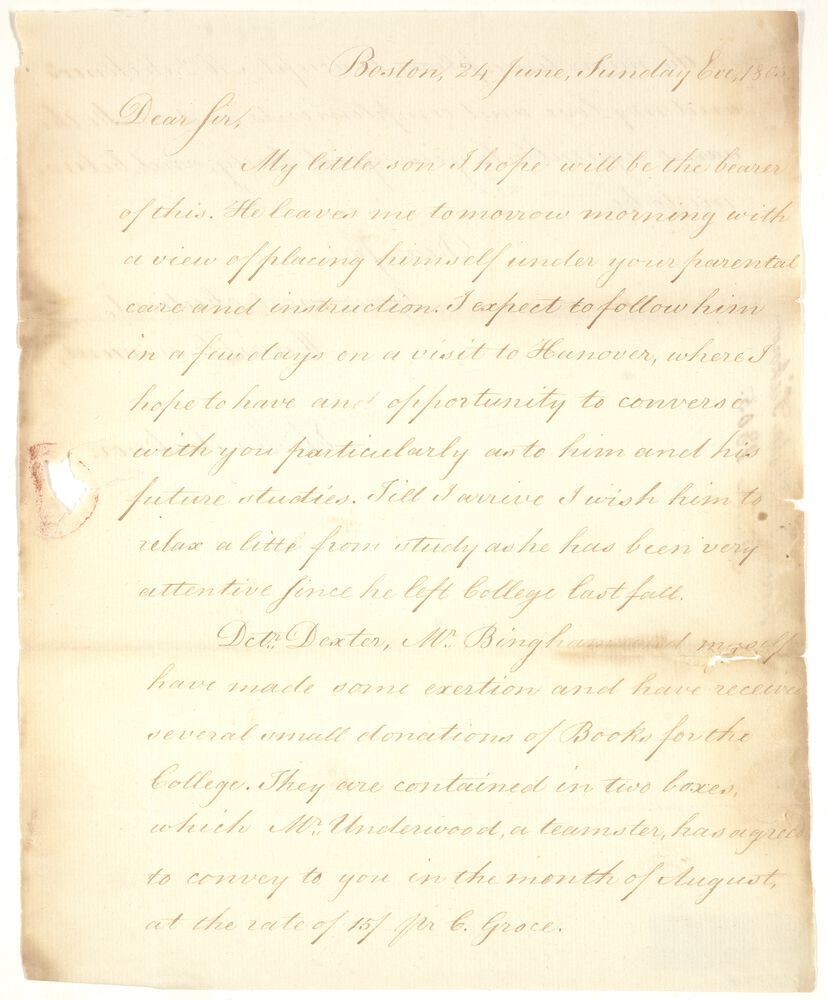 “My little son I hope will be the bearer of this. He leaves me tomorrow morning with a view of placing himself under your parental care and instruction.” 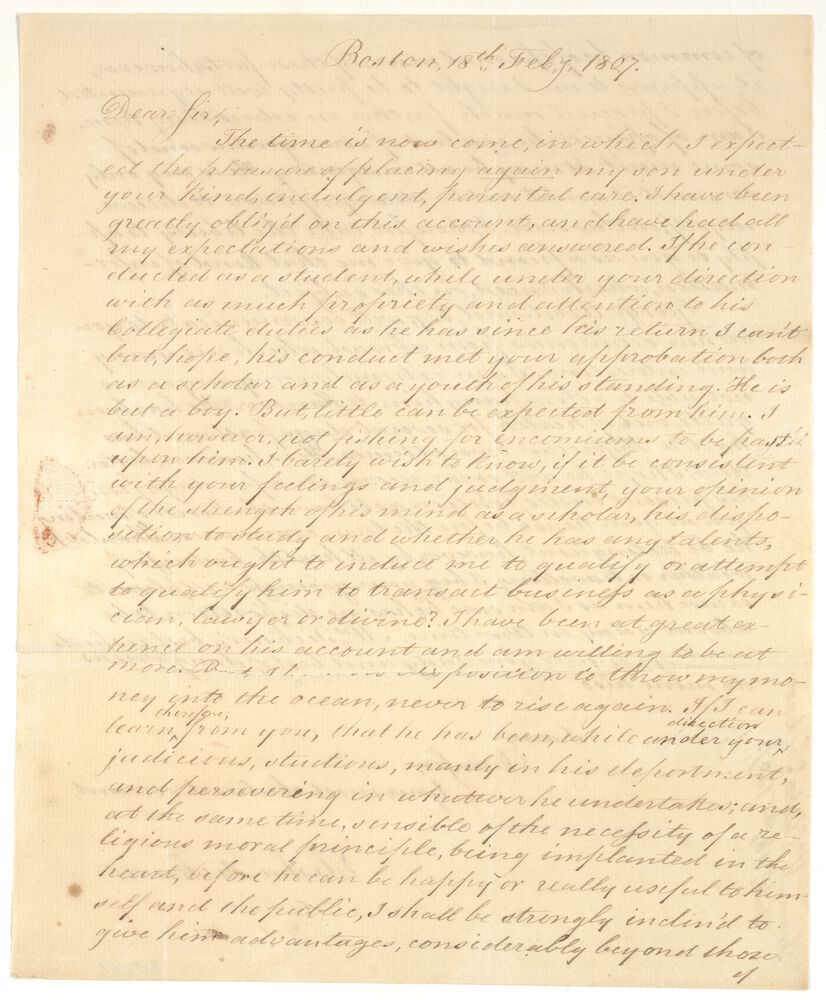 When George was about to graduate, his father, Elisha, questioned John Wheelock on his future prospects to determine if he should invest more in the young man’s education. 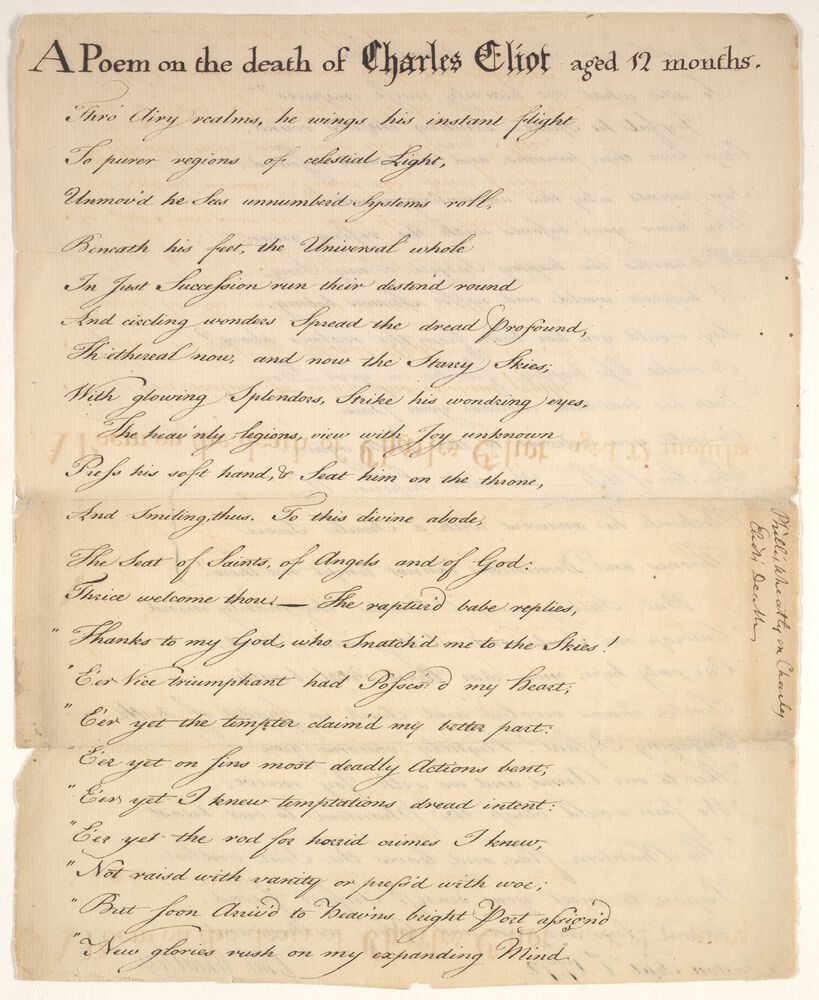 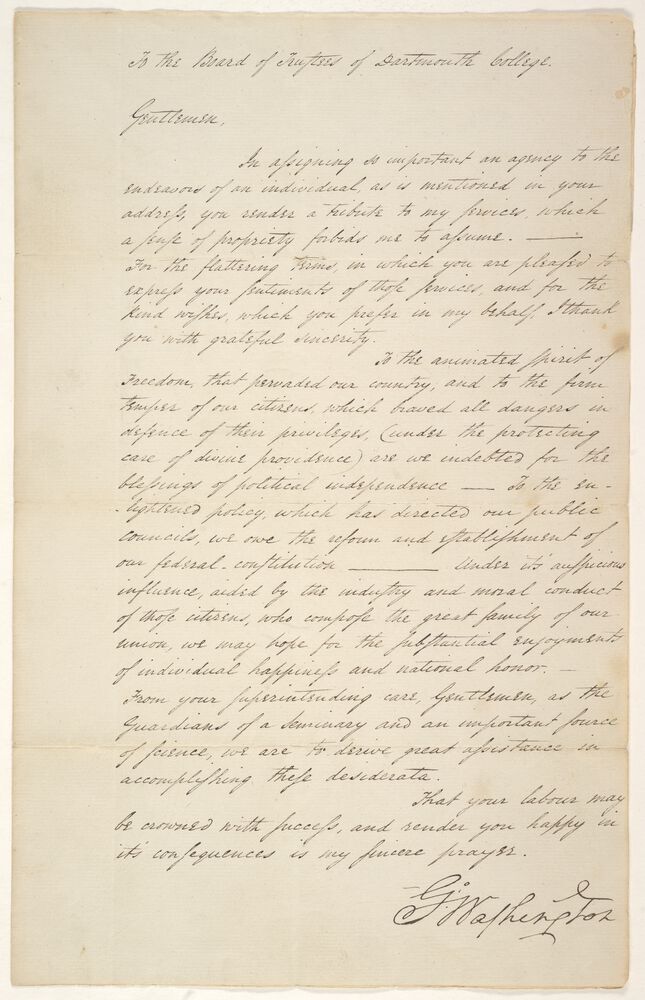 George Washington, to the Trustees of Dartmouth College, Hanover, 1789

George Washington responding to a letter of congratulations sent to him by the Trustees of Dartmouth College on his inauguration. We do not know how the letter came to be in George Ticknor's collection. 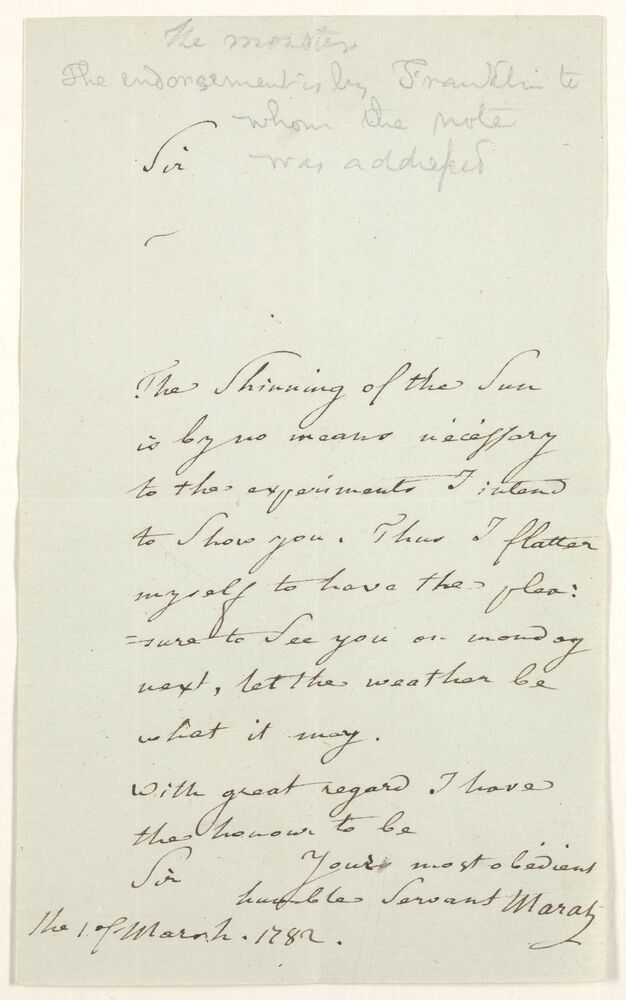 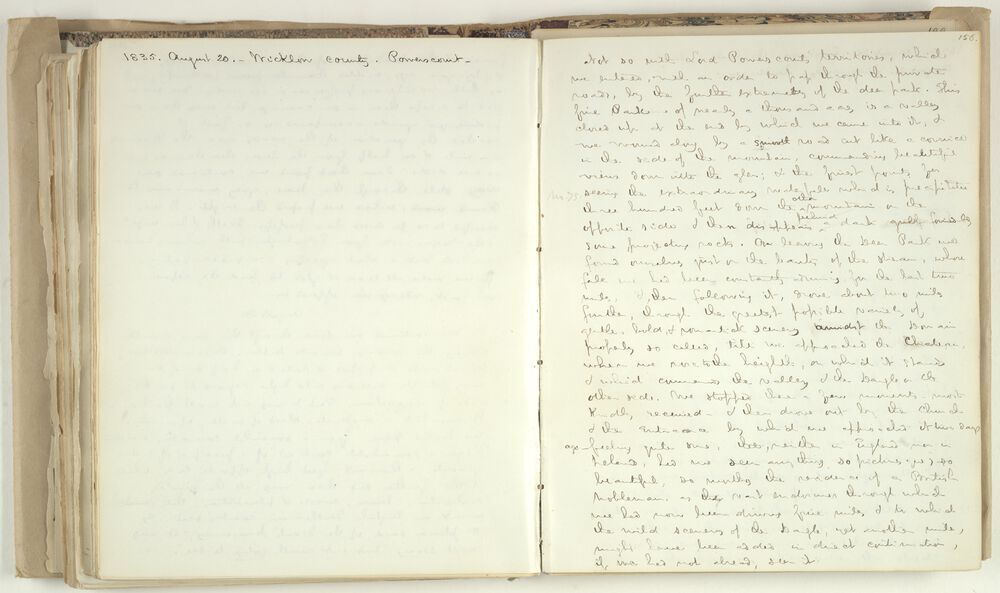 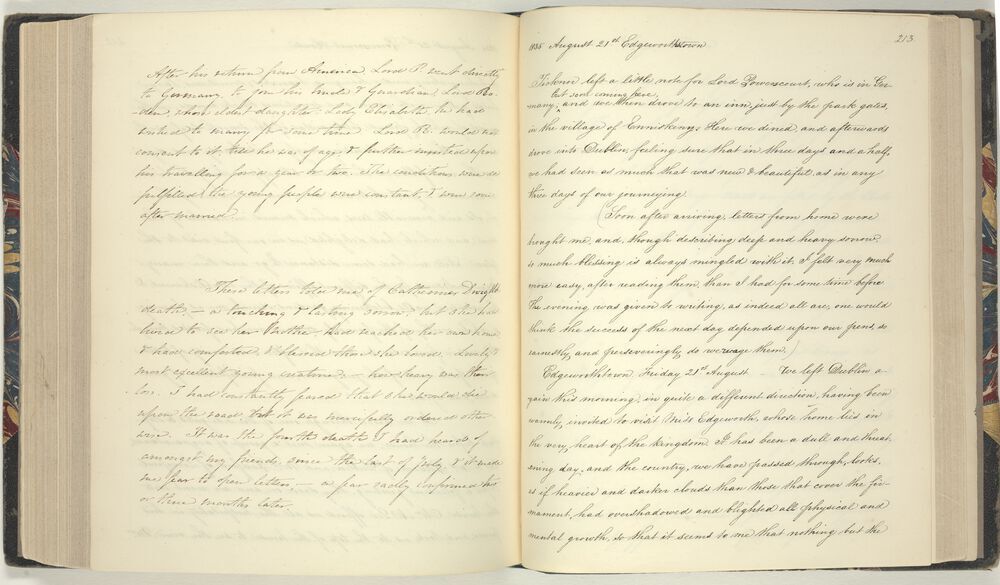 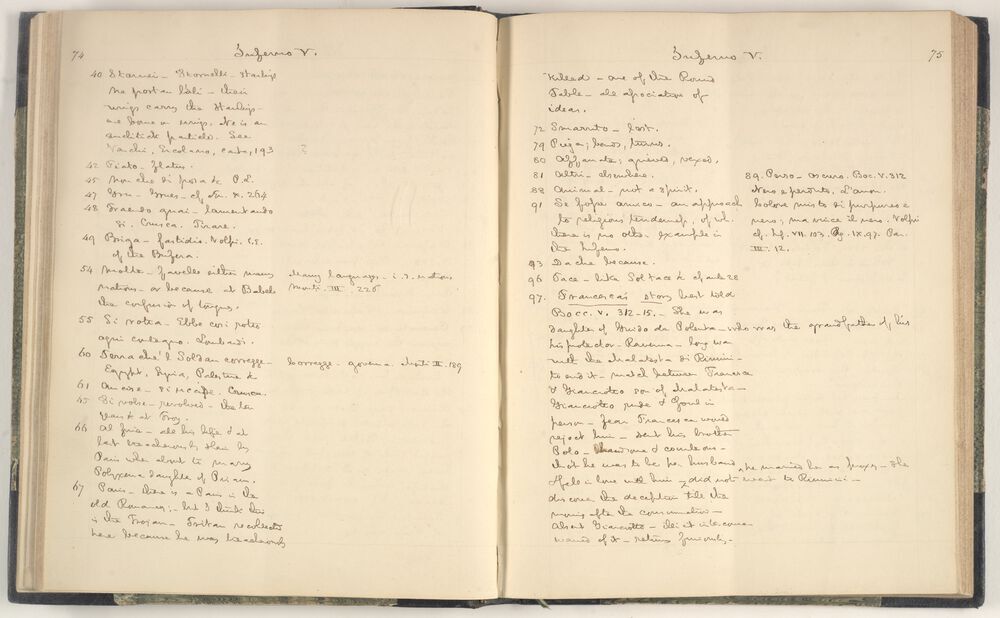 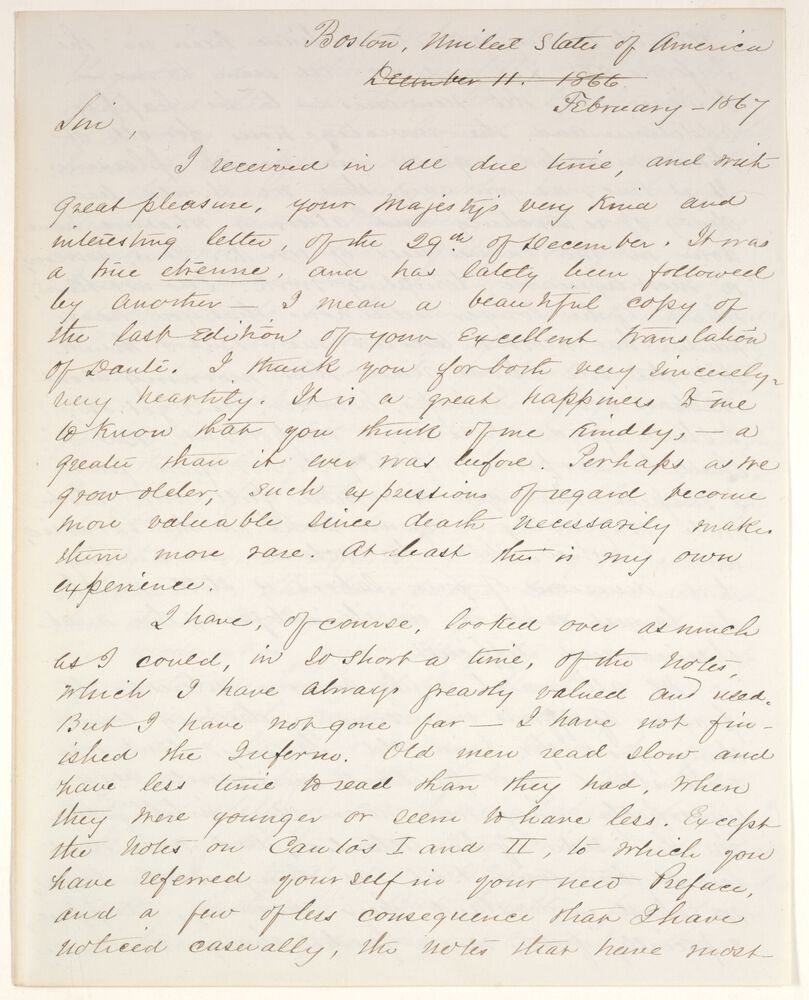 George Ticknor corresponded with the literati of Europe. Here he discusses translations of Dante with King Johann of Saxony.