Like any institution of substantial age, Dartmouth bears a speckled past. Part of this past includes the dislocation and exclusion of those less fortunate, or those viewed as “the other” by society. This included students who were Native American, African American, Jewish, Asian, or women, as well as those whose sexual orientation or gender identity put them at odds with society. While Dartmouth was the first Ivy League School to admit African Americans, they were initially not welcome in the College’s dormitories and were often required to board at local homes. When they were allowed on campus, Dartmouth’s cost-based housing system meant that they were relegated to the cheapest rooms, which were generally the least desirable quarters, or in the most remote locations.

Both Jewish and African-American students faced discrimination in the Greek system until after WWII. In 1949, a group of students, primarily made up of returning veterans, began a campaign to remove discriminatory clauses from fraternity constitutions. By 1964, all of these clauses had either been removed or the fraternities had separated from their nationals. While this was a great victory and a proud moment for Dartmouth it still did not end discrimination at the College.

Previous: Home away from Home: Life in the Dorms -- Next: Going to Dartmouth 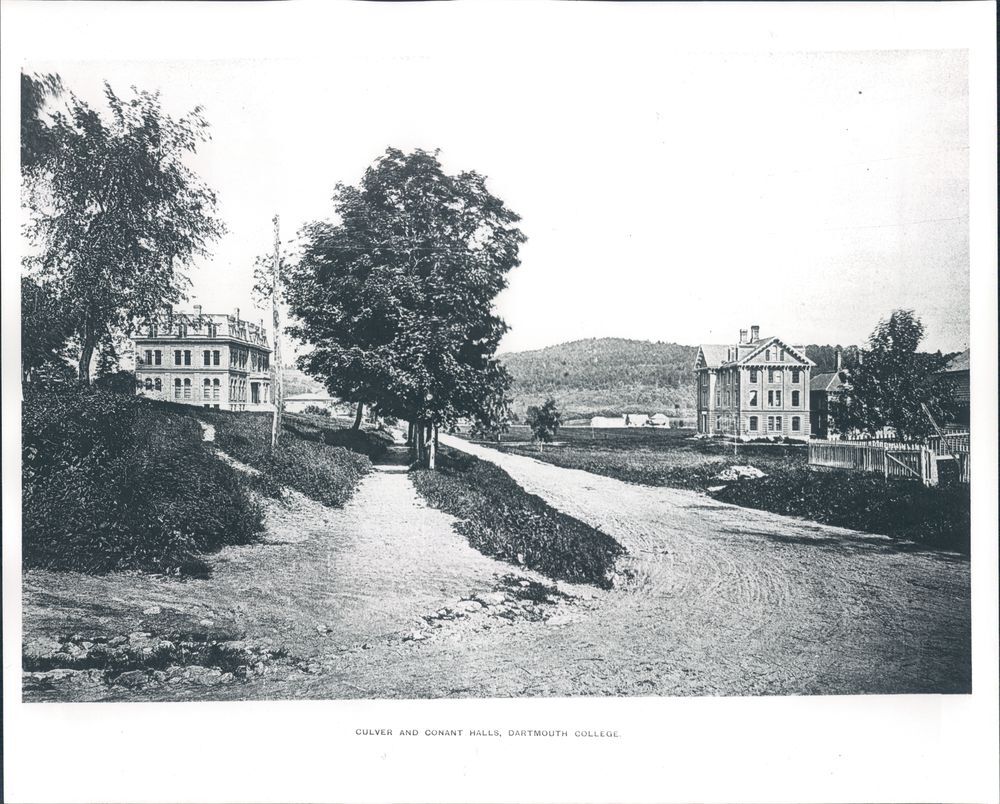 Also known as Hell Gate because of its location close to a swampy part of town, and because it was a bit further from what was then the campus than most dorms, Hallgarten was one of the cheapest dormitories on campus. At a time when each room was priced based on it desirability, this meant that the poorest students—including most minority students—were relegated to these buildings. 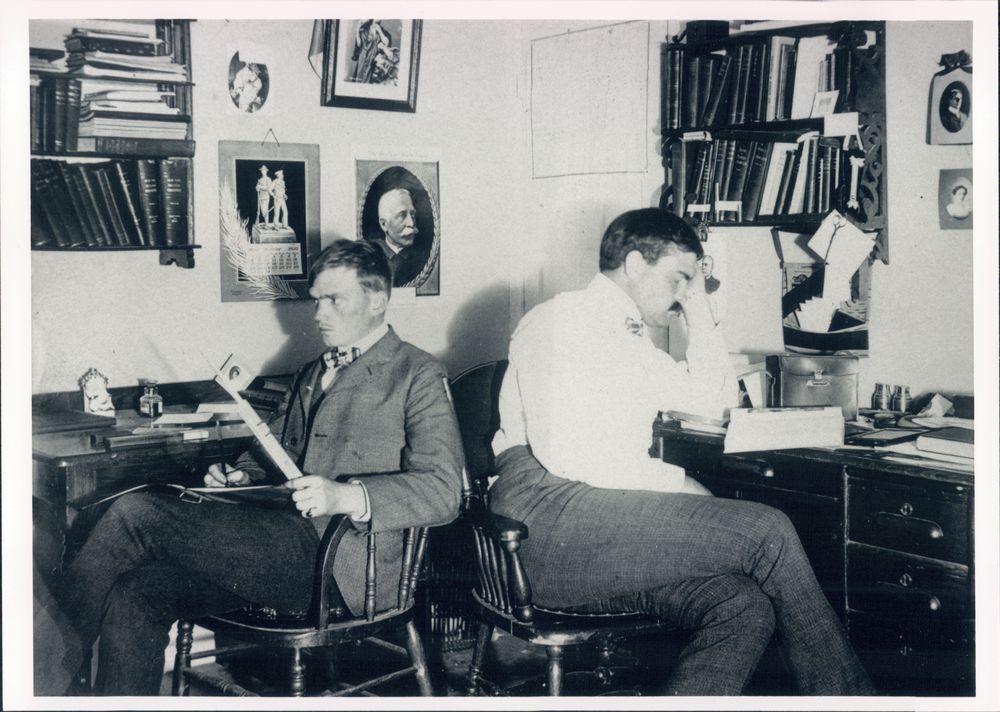 Here you see a couple of students trying to manage in the cramped quarters afforded to those who were forced to room in Hallgarten. 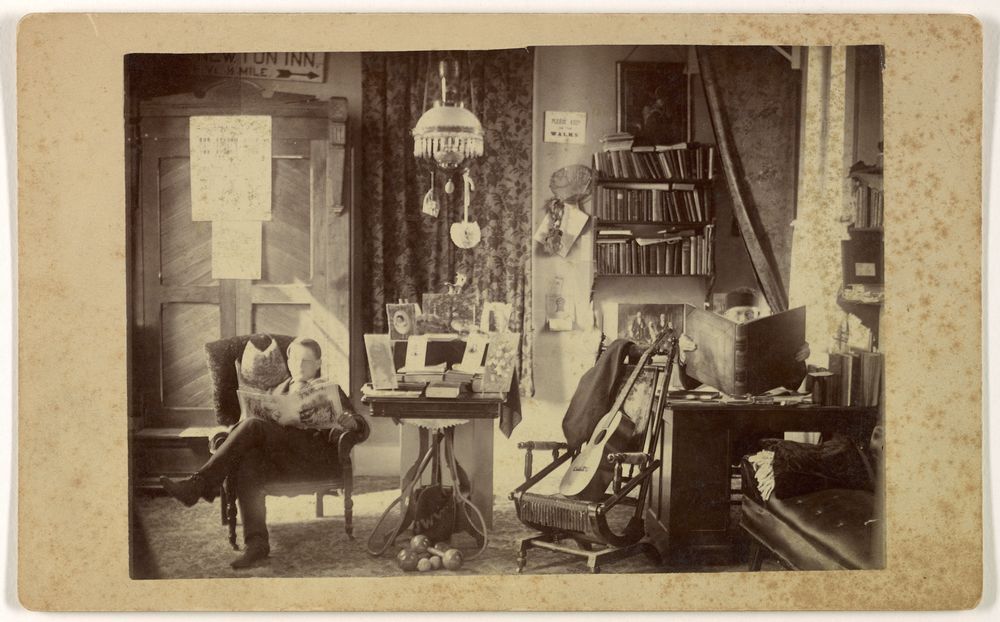 An example of a more opulent room in an unidentified dormitory in the 1890s. 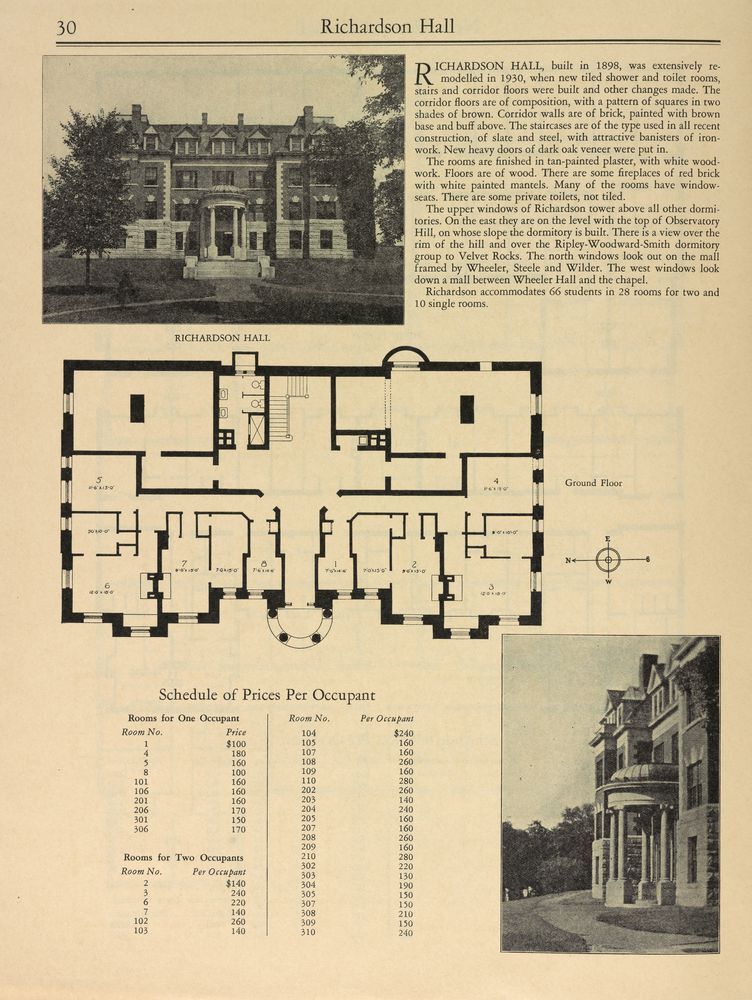 This guide to campus housing shows a range of room costs for Richardson Hall in 1934. 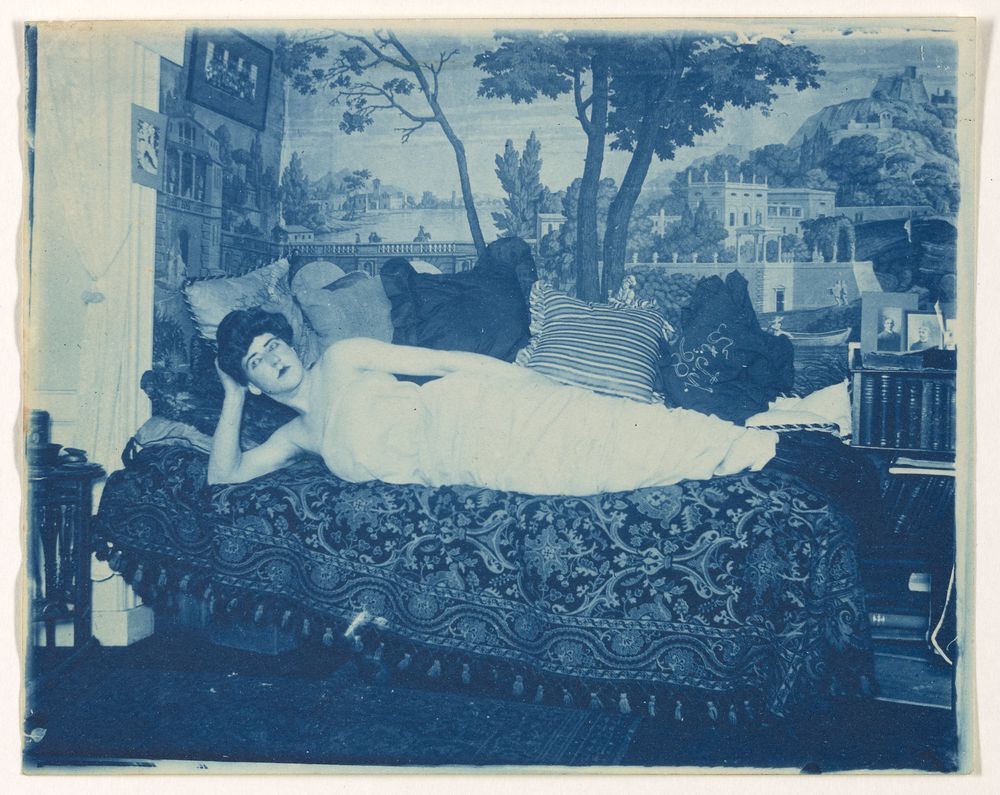 In the 19th and early-20th century it was common for men to play the parts of women in Dartmouth plays. These roles were coveted and those who convincingly played women’s parts were celebrated. 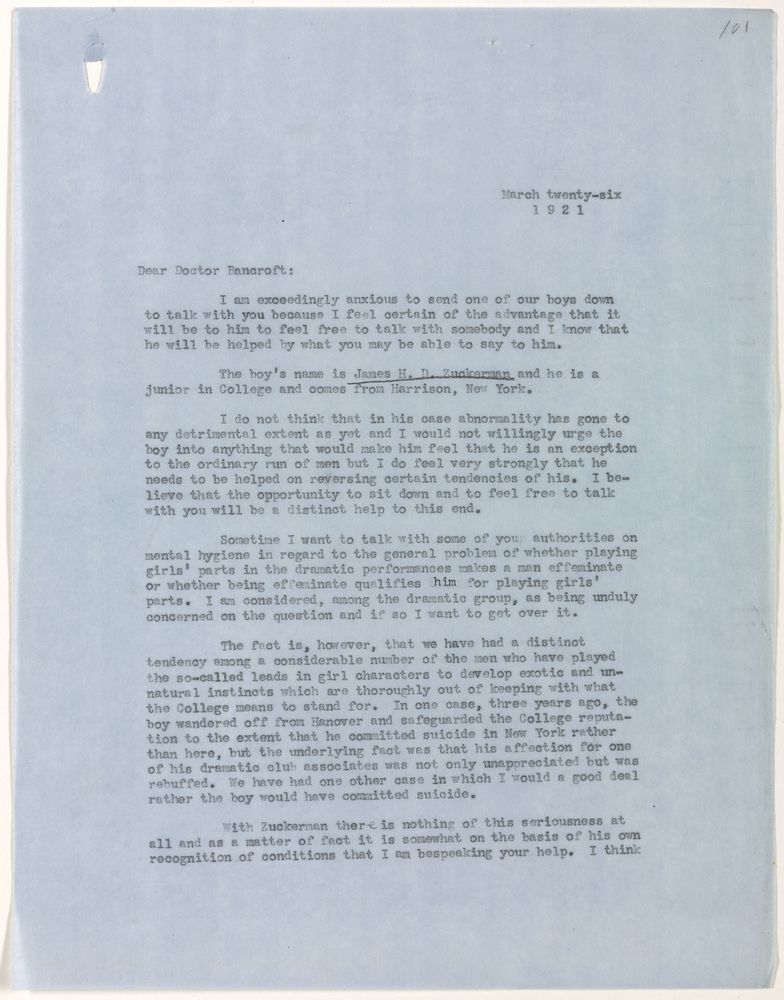 In the 1920s, several events occurred that led the then President of the College, Ernest Martin Hopkins, to worry about the influence on the “mental hygiene” of men playing women’s roles. In other words, he was afraid that it was encouraging them to become gay. In this letter, Hopkins writes to consulting psychiatrist, Charles Bancroft, to express his concerns about what he clearly sees as a disease that is spreading among the student body. While this letter is highly disturbing in many ways, it is an exemplar of the stigma that gay students faced in this time period, and often still do. 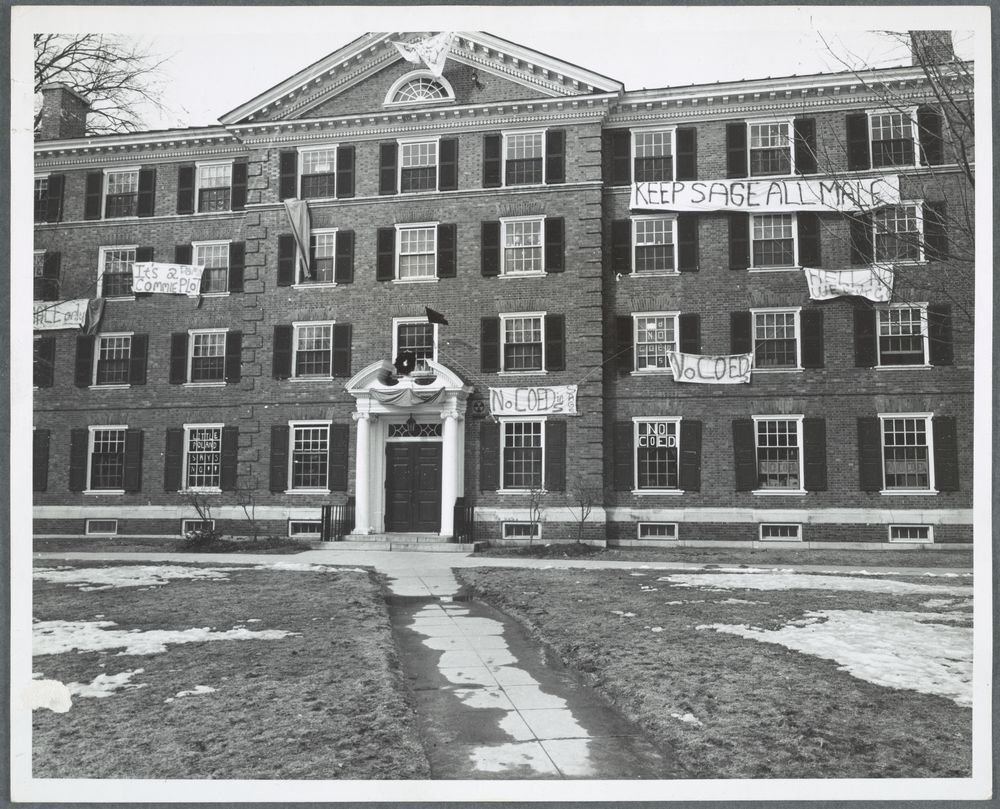 Despite Hopkins’s concerns about men playing the roles of women, Dartmouth took its time inviting women into its community. Dartmouth first admitted women in the fall of 1972 and was the last of the Ivies to take this step. While the majority of men welcomed the addition of women to Dartmouth, a vocal and often profane minority resisted the change as can be seen by the banners hung from the windows of Russell Sage Hall. 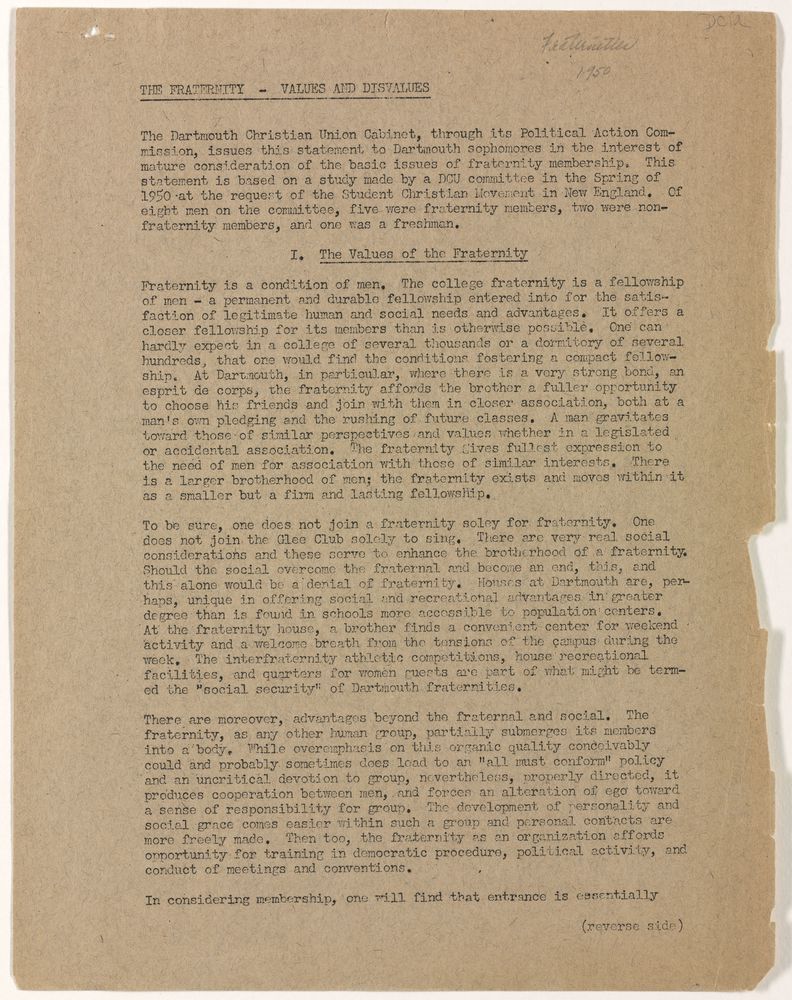 In this editorial-style commentary on fraternity culture, the blackball box is listed as a “disvalue”due to its role in censuring pledges and in racially discriminatory practices. 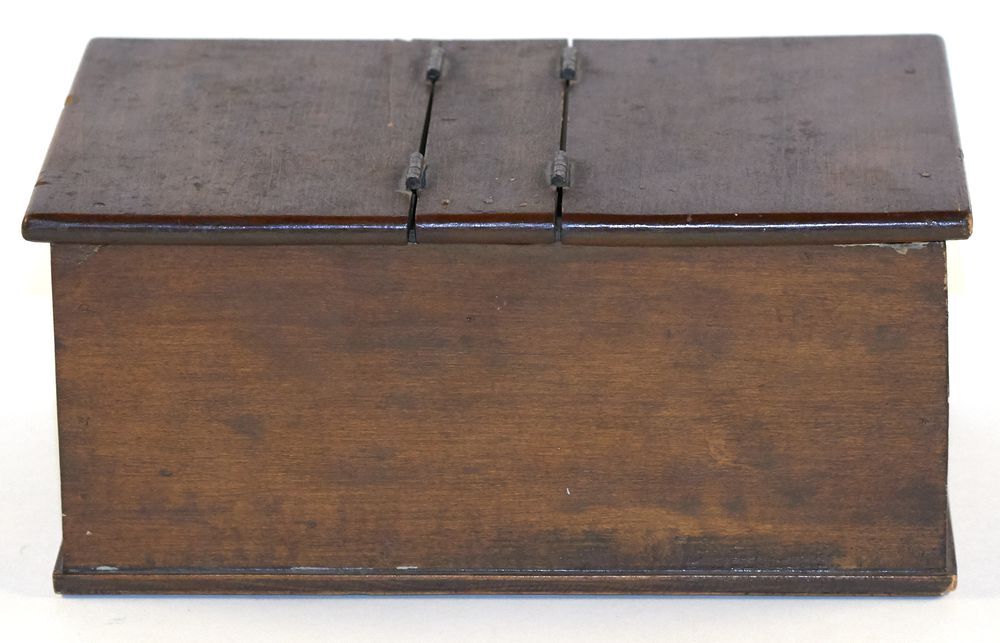 A blackball box used when voting on fraternity pledges. White marbles were “yes” votes and the black marbles were “no” votes. A single, anonymously-delivered black ball was enough to turn down a pledge. 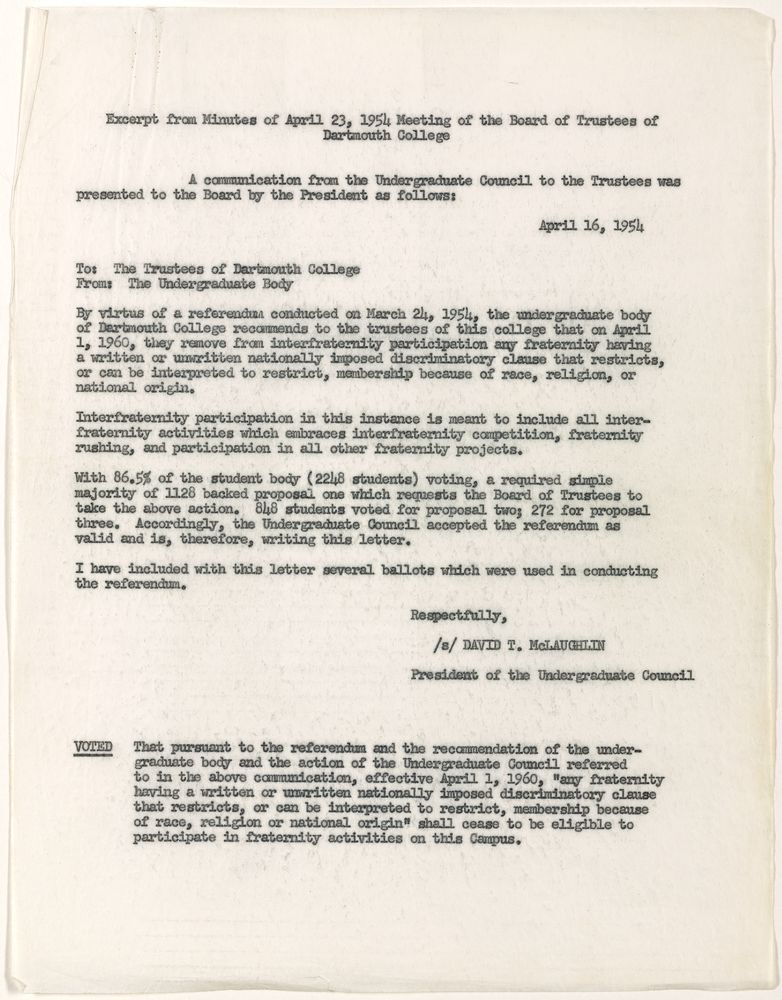 Excerpt from Minutes of April 23, 1954, Meeting of the Board of Trustees

This excerpt of the Board of Trustee meeting minutes details a vote by the Board to support a resolution put forward by the Undergraduate Council that fraternities must do away with their discriminatory clauses by 1960. The Council was led by David McLaughlin who would go on to become the 14th President of Dartmouth College. 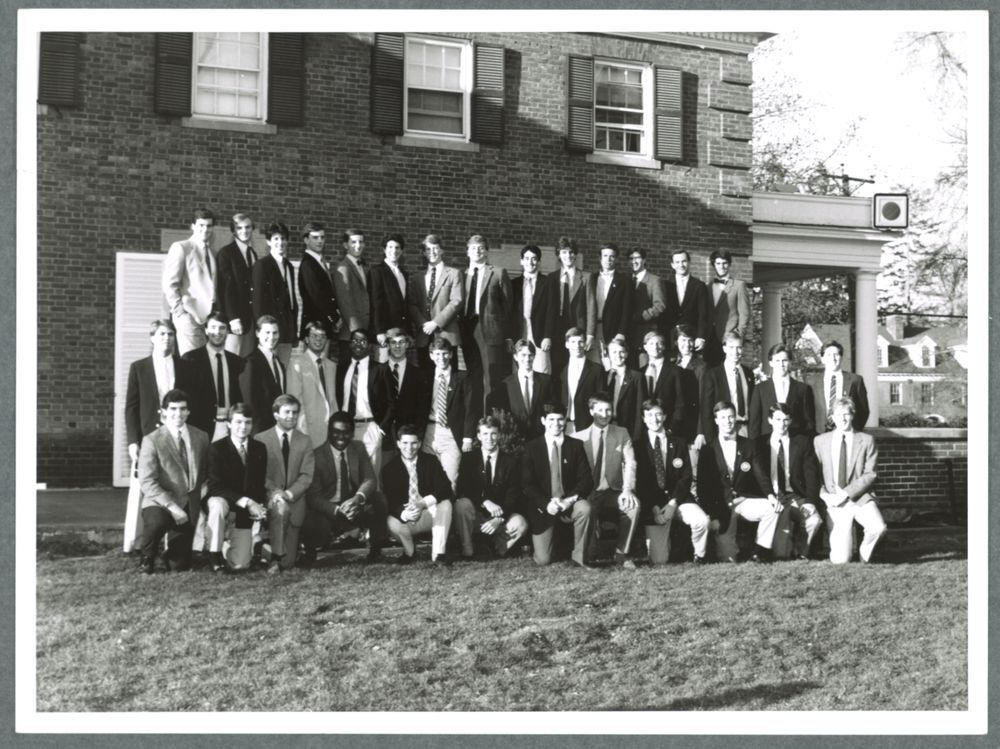 While the Undergraduate Council’s resolution did away with fraternity discriminatory clauses, it also drove a number of frats to separate from their nationals. The resolution did not end discrimination, and it would take several generations before racial integration was a reality in Dartmouth’s Greek system.