An exhibit on diversity and inclusion in the Dartmouth fraternity system from desegregation, to co-education and the new millennia. Exhibit curated by Christian Dawkins '22 as his final fellowship project.

Diversity and Inclusion in Dartmouth Fraternities Throughout the 20th Century

An exhibit on diversity and inclusion in the Dartmouth fraternity system, curated by Christian Dawkins '22 as his final fellowship project. Keep scrolling to view his curator's statement and exhibit index. 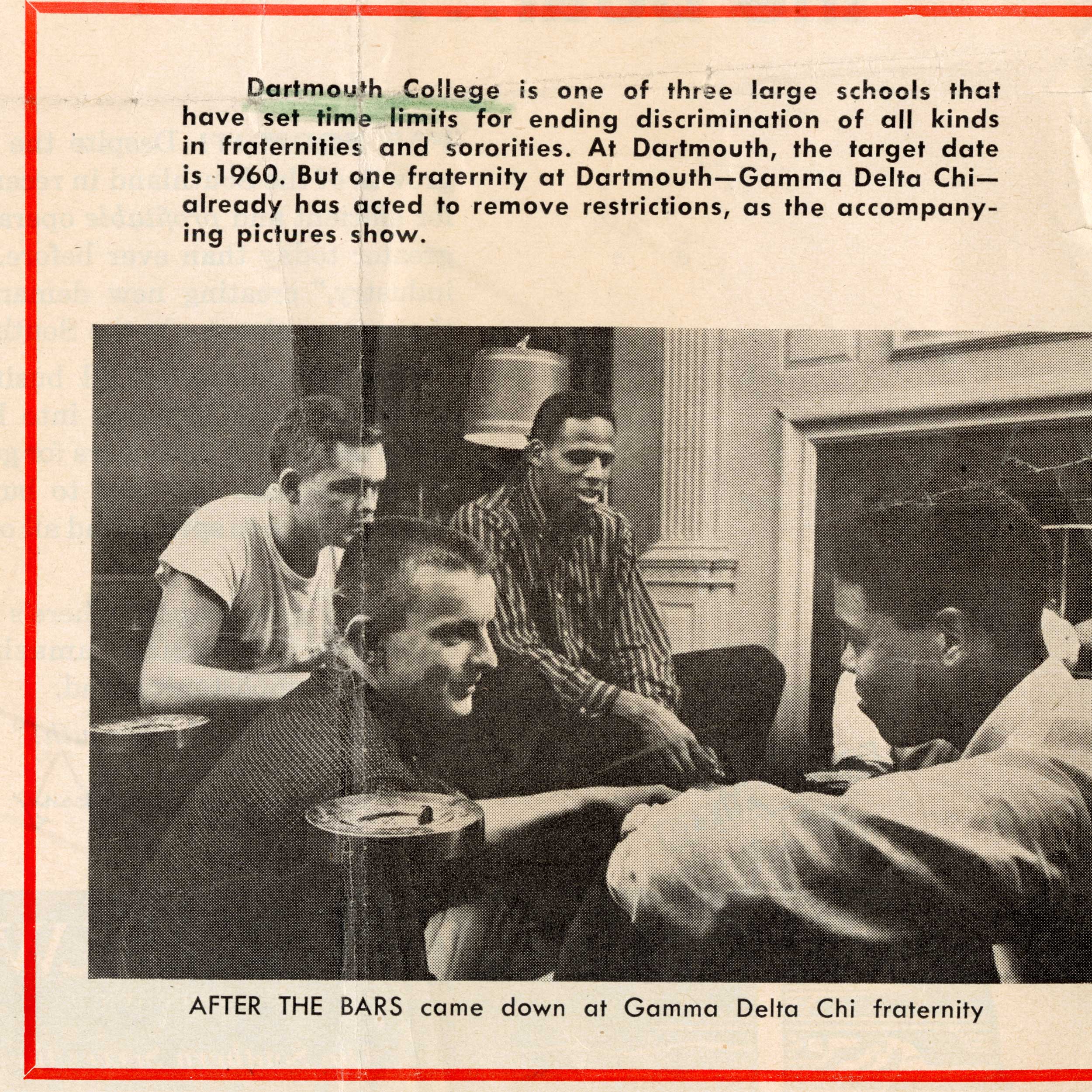 Now It's "Integration" on Fraternity Row

Gamma Delta Chi was one of the first integrated fraternity chapters at Dartmouth. This magazine article from U.S. News and World Report shows  the chapter's diverse membership in 1956. Click on title or image to view the full article.

Welcome to a digital exhibit, Diversity and Inclusion in Dartmouth Fraternities Throughout the 20th Century. The exhibit is divided into ten sections, which are displayed in the table of contents following this introduction.

My goal in curating this digital exhibit is to uncover, recollect and retell an outstanding piece of Dartmouth’s history that is widely underappreciated, misunderstood, and unknown to some. There is a storied history of heavily prejudiced fraternities being established on campus, who often restricted their membership to white, Christian born males while discriminating against all other groups of students. Within this theme, I chose to focus my research on fraternity discrimination against Jewish, Black and African-American, and female students of Dartmouth’s past. I was fascinated by the process of Dartmouth and the college community working to convert fraternity spaces from segregationist and highly exclusive groups into societies open to all students on campus, regardless of their affiliations and identities.

In the middle of the exhibit, the era on campus following World War II through 1972 is highlighted as during this time a number of fraternities were engaged in the most significant transformation since their founding: desegregation and disassociation from national fraternity organizations. This time period closely aligns with the college presidency of John Sloane Dickey, who labored tirelessly to alter the negative and discriminatory aspects of Greek life on campus—his work on the matter is documented extensively. Two student referenda to desegregate Dartmouth fraternities feature between fraternity history from the first and last quarter of the century. The beginning of the century displays the history of Jewish fraternities founded on campus, namely Pi Lambda Phi, as Jewish men on campus were seldom welcomed into the well-established fraternities on campus due to discriminatory clauses and agreements. The close of the century presents two amazing stories of diversity and inclusivity: the modification of a few fraternities’ membership requirements to become coed organizations after the college began to admit full-time female students, as well as the founding of the first historically African American fraternity on campus—Alpha Phi Alpha.

From their state in 1900, Dartmouth fraternities experienced an exceptional transformation by the year 2000: desegregation, increased diversity in membership, and an increase in the number of Greek spaces available to various student groups are a few examples at the forefront. The question remained in 2000, and to a certain extent still remains today, were all students truly welcome and accepted in Dartmouth fraternities? In the conclusion of the exhibit, I explore this question and the progress made toward complete inclusion in fraternities by 2000, seeing as many students, faculty, and administrators at the time felt fraternities still possessed heavy bias and prejudice.

I urge you to take the time to listen, learn, and engross yourself in the history of Dartmouth Greek life during this time period. The transformation of Dartmouth fraternities from 1900 to 2000 was grueling, requiring perseverance, courage, and an unprecedented collaboration between students, student groups, faculty members, and administrators. Fraternities on our campus would not have reached a consensus on desegregation and inclusion as early as they had if not for the work of the Dartmouth community, and their efforts helped spearhead a movement across the country in which Greek spaces on college campuses began to adopt policies geared toward increased diversity and inclusivity. I hope you enjoy the exhibit!

Christian Dawkins ’22 is a History major and Sociology minor. To read his fellowship blog post, visit the Rauner Library Blog.